Wanderlust explores the art of a man who crossed oceans in his imagination and explored fairytale castles in his dreams. Prepare for parrots, pipes and celestial fairies as you step into Joseph Cornell’s magical imaginarium

Most children have an irrepressible curiosity fuelled by supple imaginations, which leads them to impulsively collect the strangest things and squirrel them away in shoeboxes and jam jars. Buttons, marbles, pine cones and cuttings pile up and take on great meaning in miniature but vivid worlds. They are keepsakes, curiosities and, above all, tools of discovery. Sadly, by the time we reach our teens, most of us have lost the enthusiasm for collecting, along with our patience for fairytales – after all, adulthood offers a great many distractions. But Joseph Cornell (1903-72) was different. He kept that curiosity alive throughout his life.

Cornell might seem like an outsider, both in his life and in his art. All the signs were there. Socially awkward and a devout Christian Scientist, he lived with his widowed mother and disabled brother in New York, where he was born. He rarely left his home city and never travelled abroad. He left school without graduating and took up work as a textile-sample salesman, a job he had no interest in, or aptitude for. But in his lunch hours, Cornell browsed secondhand bookshops and flea markets and began collecting the pre-loved treasures that would later form the basis for his art. But do not be deceived; he was not a man cut off from life. Cornell was fully aware of – and engaged with – what was happening around him, not to mention the contemporary art scene. Having never been formally trained, he became a fulltime artist who exhibited regularly and took on freelance design work for publications such as Vogue.

He was widely read and a keen theatregoer. He befriended ballerinas, many of whom he idolised from afar (he was a shy man), and counted Marcel Duchamp among his friends. The surrealists were also a big influence on his early work, but while there are obvious parallels between surrealism and Cornell’s oeuvre, he rejected ideas of the subconscious and the sexual and violent overtones that came with it. This (admittedly eccentric) artist cared more about the poetry of objects, the possibilities of science and the fragile innocence of childhood. His thirst for knowledge and imagined travels are the focus of Wanderlust, an exhibition teeming with fascinating works. There are 80 in all, ranging from Cornell’s early collages of Victorian prints to his shadow boxes and film montages.

Untitled (Celestial Navigation) c1956-58 encapsulates so much of what Cornell’s art was about and the poetry of his inventions. Contained within a landscape-format box is a collection of items celebrating humanity’s relationship to the cosmos in an era when the space race was heating up. The inside walls of the box are pasted with lists of typed numbers resembling complex coordinates. They form a frame around a window to the stars – a chart of the night sky. The base of the box houses a drawer that can be removed, the inside of which is lined with another star map covered by a thin layer of sand. Tilting the drawer moves little ball bearings and spiral shells, leaving trails on this miniature beach that resemble the tails of comets in the night sky. Cornell wanted his works to be handled and heard, but sadly that just isn’t possible in a gallery with huge visitor numbers, so this artwork, and it’s removable shoreline, remain static and behind glass. But the curators have tried to give a sense of movement with a small video of the drawer being used as intended.

Cornell was also very fond of birds. One of his many series was entitled Aviary and consisted of 26 box constructions housing decoupage parrots that preside over all manner of objects. A few are exhibited here alongside a more troubling variation on this theme. Habitat Group for a Shooting Gallery (1943) was a comment on the human cost of the second world war. Little clippings that provide a direct reference to Europe are chaotically dotted behind a collection of tropical birds, each assigned a number. This assemblage resembles the shooting galleries at amusement parks on Coney Island that Cornell visited as a child, but with an unusually morbid twist. The glass front to the box has been purposely broken as though a bullet has hit it and struck an unfortunate cockatoo, whose forehead is splattered with red paint.

Some of Cornell’s later works are strikingly abstract and prefigure the work of later minimalists. Toward the Blue Peninsula: For Emily Dickinson is a poetic work with surreal overtones that finds some common ground with René Magritte. Cornell saw Dickinson as somewhat of a kindred spirit. He read countless books by and about the American author and, feeling something of the sadness in her solitude, dedicated a work that sets her free from what he described as her “tortuous seclusion”. This little box is an empty aviary, painted white inside (Dickinson wore only white). Touchingly, a little window opens on to blue skies beyond.

It has been speculated that Cornell died a virgin, but he had a romantic heart and admired women from afar. He made several collages for the Russian ballerina Tamara Toumanova. After watching her rehearse during his lunch breaks, he was introduced to her by her costume designer (and their mutual friend) Pavel Tchelitchew. Tourmanova was gracious to her admirer, but their relationship consisted only of brief backstage meetings and one visit by the dancer to Cornell’s address at Utopia Parkway. The collage on display here combines the oceanic and the celestial. A tinted photograph of Tourmanova has been adorned with butterfly prints to produce a floating fairy soaring among the stars. But on her head, she wears a tall conical shell and is accompanied in her flight by an entourage of deep-sea creatures.

Duchamp’s world of readymades and the prominence of surrealism might have given Cornell’s work a certain credence at the time, but his 3D collages looked much further ahead. After all, this unassuming artist was making his own “pharmacies” long before Damien Hirst started putting things in bottles. But where Hirst tackles the world with cold aggression, Cornell was an artist and a poet who linked the microcosm and macrocosm in subtle and tactile ways.

The curators at the Royal Academy have handled the life and work of this most thoughtful of artists with great sensitivity and understanding. So take a trip into another world full of wonder and possibilities because a show like this doesn’t come along very often. 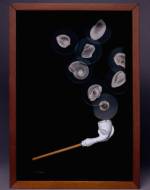 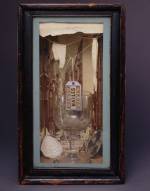 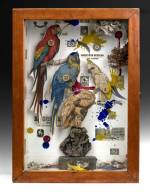 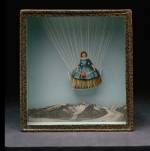