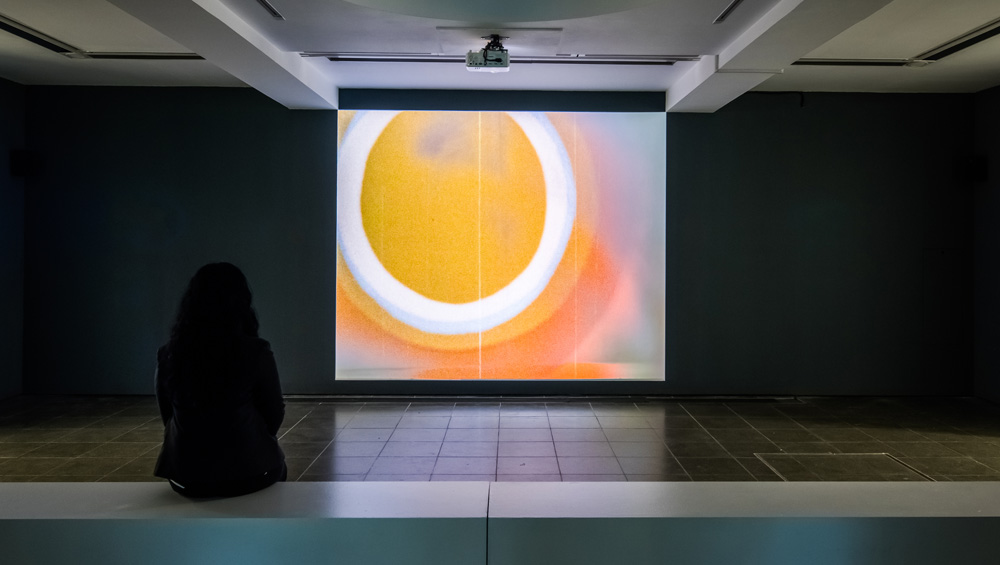 John Latham (1921-2006) was a conceptual artist whose vision of reality, its past and its future, brought his practice out of the physical world and into the spaces of language, time and knowledge. A critic of institutions and a believer that the artist should act as what he termed an “incidental person” – one who operates in a non-art context, inserting oneself into political and social life – Latham created an oeuvre that paved the way for much socially engaged and politically charged art practice that we see today. This spring, the two Serpentine Gallery spaces in London’s Hyde Park present a career-spanning exhibition of Latham’s work, coupled with a visual response by four contemporary artists influenced by him.

While deeply inspiring to many artists and cultural figures, Latham’s approach, like much conceptual art, can often feel inaccessible to a non-specialist audience. John Latham: A World View does little to help in this regard, making the uninitiated viewer work hard to comprehend the wide array of his objects on display. First, the show tries to include too much in its mere seven rooms, boasting that it “encompasses all strands of Latham’s extraordinary practice”, without a clear narrative that explains the significance of those strands and the shifts between them. Second, there are no explanatory captions to the works. Spotting my confusion, a gallery assistant informed me that a “Serpentine mobile tour” was available if I logged on to the public wifi. It may sound old-fashioned, but I abhor having to read my phone while looking at art. Impressive as its embrace of digital technology has been in recent years, an institution of the Serpentine Gallery’s calibre should know better than to confuse the act of “exhibiting” or “showing” with that of sending visitors off to “find”’. In the absence of wall texts (and in my case, as a result of critical stubbornness), the viewer is left without an understanding of two crucial aspects of Latham’s work: his conception of time and his attitude towards knowledge.

Latham conceived of art, experience and the history of the world as a series of events, and rejected the idea that space and sensory perception were the best means of describing them. Art-making was therefore a temporal act. To create art was to point to a time-based reality and draw it together through an understanding of what Latham termed “flat time” – a construct that permeates and underlies politics, society, the arts, and so on. The Serpentine Gallery show opens with a series of experimental films from the 60s and 70s that reflect this idea of experience as time, including Speak (1962), his flashing, hallucinogenic series of shapes and colours that Pink Floyd showed at an early gig at London’s Roundhouse. Pieces such as Time Base Roller (1972) show painted canvases rolled out, moving, expanding and decreasing, as if the process of viewing as well as making a painting is to be felt temporally, while in Forcefield (1967), lines of paint appear to be magnetically pulled off the canvas even as we behold them.

Painting with Tennis Ball Marks (1990), a large white expanse bearing dark paint splodges, and Five Noits: One Second Drawings (1971-2), five small canvases with sprayed dots of paint on them, demonstrate further Latham’s conception of art-making as an event – the chance arrangement of projected paint on a surface. These works also act as recordings of time, as a “one-second drawing”, but where that unit of measurement becomes personal to the maker, it is also abstract, non-specific – a duration without identifiable chronology, like a tree ring.

Knowledge and language were another battleground for Latham, who believed it “necessary to behave without knowing. Knowledge is an illusion that people have.”1 Books became his material for the identification, disruption and destruction of knowledge, and many such works are represented in this exhibition. His tendency to burn, glue, cut, screw up, reshape and obscure the pages and covers of books is seen in pieces such as The Story of the RIO (1983) and the blackened pages of Untitled 1958. The film Encyclopedia Britannica (1971) presents a temporal “reading” of this book of knowledge, but the text becomes increasingly overexposed and illegible. Here the artist, and/or the incidental person, interrogates systems of knowledge by degrading them, pointing to the power structures at play in their patterns and opening a space for new ideas to be written.

The elliptical nature of much of Latham’s thinking, as maintained and exacerbated by the Serpentine Gallery show, is countered in part by the neighbouring Serpentine Sackler Gallery’s Speak: Tania Bruguera, Douglas Gordon, Laure Prouvost and Cally Spooner. These four artists make easier the task of understanding Latham’s approach to language, time, play, knowledge, the political power of art and the importance of the physical event or performance.

Bruguera’s offering is a video about her bid to run for the presidency of her native Cuba when Raul Castro steps down in 2018. While the exhibition text only loosely connects this to Latham’s work through his activities with the Artist Placement Group, which involved artists working in organisational and industrial settings to expand art’s social reach, the piece does speak to Latham’s understanding of artists as agents beyond the cultural realm.

Gordon’s response to Latham’s work feels more direct. He knew the artist personally (an interview lasting 1hr 40 mins between Latham and Gordon from 1999 is shown in the exhibition) and, here, he presents Latham-inspired sculptural games, adaptions of table tennis and pool, with specially devised rules for visitors to follow. A large wall installation by Gordon incorporates and mirror-reverses words from Latham’s texts, including his statement “THE MYSTERIOUS BEING KNOWN AS GOD is an atemporal score, with a probable time-base in the region of 1019 seconds”, indicating the time-based nature not only of physical experiences but also of spiritual ones and the beliefs that underpin them.

Spooner’s contribution to the exhibition consists of a live dancer, stretching as if in preparation for a performance that does not materialise. Described rather vaguely by the accompanying text as “a warm-up for our position as individuals facing an uncertain political future”, this preparatory event works as an excellent pendant to the new data structure that Spooner presents nearby in her work Self Tracking (the five stages of grief) (2016). Consisting of a set of parallel horizontal lines in pencil and makeup that reaches across three gallery walls, the five years described in this work’s title refer to the years 2012-17, when data on the artist’s metabolism, her career rank and the XE.com exchange rate of the British pound against the euro were collected and somehow used to form the lines. It feels frustrating not to know how this information shaped its visual manifestation, and in this there is a sense that Spooner is presenting Latham with her own critique of modern digital structures of information and their communication. Despite this, there is also a personal timbre to this melancholic streak of “grief”, as if smeared by the fatigued leanings of an exasperated body, contrasting heavily with that of the fresh, able dancer stretching nearby.

It is in the work of Prouvost, Latham’s assistant in the early 2000s, that we see the most direct interrogation and elucidation of Latham’s thinking. The amusingly titledWe will multiply(2017), a set of used teabags on a radiator, conjures the dangerous idea of a miniature or latent force, perhaps parallel to that of the artist as social disruptor, one which, like biological warfare, digital viruses, or even Latham’s flat time, pervades the system and acts as an agent of change from within. The motifs of both teabag and radiator reappear in Prouvost’s dark, room-sized installation entitled end her is story (2017), alongside objects such as fruit, vegetables, bread, branches, foil, a computer screen and a teacup. These are placed on plinths and subjected to a visual and aural spectacle that lights them up and links them via spoken and written words. The effect is nonsense, or near-sense: as the brain tries to grasp and connect, each stimulus slides away. In accordance with Latham’s understanding of reality, space and objects are converted into an event, a temporal spectacle, while narrative is dissected and dissolved, disconnecting knowledge from language.

Taken from the 1962 Latham film, the exhibition’s title, Speak, could be regarded as a command, issued from an unspecified source, towards these four artists. Together, the two shows reveal speech as a confinement, and language as both a tool and a hindrance. While John Latham: A World View demonstrates that the absence of a curatorial language is exclusive and frustrating, in Bruguera, Gordon, Spooner and Prouvost’s temporal and contingent treatment of experience and knowledge, the command to “speak” is met with hesitancy, a stuttering, suggesting a future declaration implied but not yet expressed.