In January 2008, the Cuban artist Tania Bruguera puzzled visitors to the Turbine Hall at Tate Modern in London when she brought in two horses ridden by uniformed mounted police officers who were using crowd management techniques to control the visitors. In August 2012, she once again surprised the public at the same venue when she presented a fragment of her long-term project Immigrant Movement International, which also compelled audience participation.

Brugueras’s action was part of the first series of The Tanks live programme, the inaugural show at the building’s recently opened space dedicated to performance, video art and intervention. Thus, at that moment everything was new and unprecedented, which lent unpredictability to her artwork. I went to Tate Modern to experience the action at Tanks. The only thing I knew was that Bruguera would do a performance or an intervention there. However, no further details had been given to the public, or even to the press. I had tried to get prior information, but the press office did a good job of hiding the surprise element. I have to say that I was truly amazed and, in the end, I thoroughly enjoyed living this genuine social artistic experience.

The first element of the artwork appeared to be something common to all great museums. There was a long queue to enter the Tanks chamber where the performance would supposedly take place.  However, a situation that at first seemed normal – waiting to enter an exhibition – quickly revealed itself to be anything but. There were a lot of people managing the queue and they were not hospitality experts. They were not rude, but neither were they friendly. They soon explained that, in order to be granted permission to see the piece, we would need to pass a lie detector test. This was enough to make anyone anxious.

Knowing Bruguera’s work and her constant questioning of force control and the manner in which she incorporates everyday life events into the art space (without separating them), I soon realised that the tension in the queue was part of the performance. It was an act of recreating the atmosphere at a border control area or the process of asking permission to enter a foreign country. I was in a group with four other art researchers and, coincidently, all of us were of different nationalities. We began to talk about our own identity issues, our experiences while travelling and as immigrants, and all sort of situations that one encounters when crossing national boundaries. We were excited and perhaps our voices (and accents) were stronger than most people’s. For this reason, one member of the queue control team looked at us and, making a silencing gesture with his hands, told us to converse more quietly. At this point, I started taking notes about the experience and the same not very friendly queue manager asked me what I was writing, why I was writing, what I was doing, and if I was writing about him. When I answered with a smile that I was not yet writing about him, he ordered me to move away from my group and wait in a designated area near the lie detector. I had been removed from the queue like a suspect traveller in the passport security area at an airport.

From where I was told to wait, I could see how Tate visitors were behaving during the polygraph test and I heard the type of questions that they had to answer. They were similar questions to those one has to answer when applying for a visa.  For example: “Has the applicant ever been involved in, supported or encouraged terrorist activities in any country?” “Has the applicant ever extended his/her stay in a country without permission?” I continued to wait. None of the queue organisers would look at me, and when I looked at them they avoided eye contact. Meanwhile, my friends were taken from the queue and given permission to enter the exhibition room to see the artwork without taking the lie detector test. I asked if I could follow them, but permission was denied. I waited and waited, thinking that I would have to go through the lie detector, but was informed that I would not be tested.  I was just waiting for something, and didn’t have a clue what it was: I didn’t know what I should do and what would happen. I saw my friends leaving the exhibition room. In reality, only a short time had passed, but for me who was living the situation, as it were, for real, it felt much longer. I forced eye contact with one of the queue organisers and I asked if I could enter. “Sure,” he answered and pointed to the doors, smiling in a welcoming gesture. They were just waiting for a movement on my part.

It was a relief. It was as if I had returned to reality and I remembered that I was actually in a museum. The large room that I entered was darkened, with almost no spotlights and many shadows. Some sparks from grinding machines were flying into the space. In the centre of the chamber, I saw two builders working to sharpen the metal gateway arch on which was written: “Arbeit macht frei.” It was a copy of the arches placed by the Nazis at the entrance to concentration camps. The image intensified the already confused feelings I had. This time, in my mind was the caustic and sad meaning of the sentence “work makes you free” on the doors of extermination centres. It was very powerful and emblematic.

I can say that it was a unique experience, but perhaps it would not have felt so true if I hadn’t lived through situations such as waiting in passport control queues before. As an artistic experience, it was a moment in which past memories and current perception were mixed in a confusing sensation. Even though I immediately realised that the queue was part of the artistic proposal, and was trying to be reasonable and remember that I was in a museum, it still had a real impact on me. I could not help being nervous. The trueness of the experience, the way I was treated by the queue organisers (who were actually doing the performance) and the symbolic gestures made me aware not only of political issues relating to immigration and citizenship, but more conscious of sometimes forgotten human values. 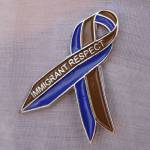