To mark the centenary of her birth, the Scottish Gallery is hosting a small but impressive exhibition of Joan Eardley, with material – new and old – on her life and practice, in Glasgow and on the coast in Catterline 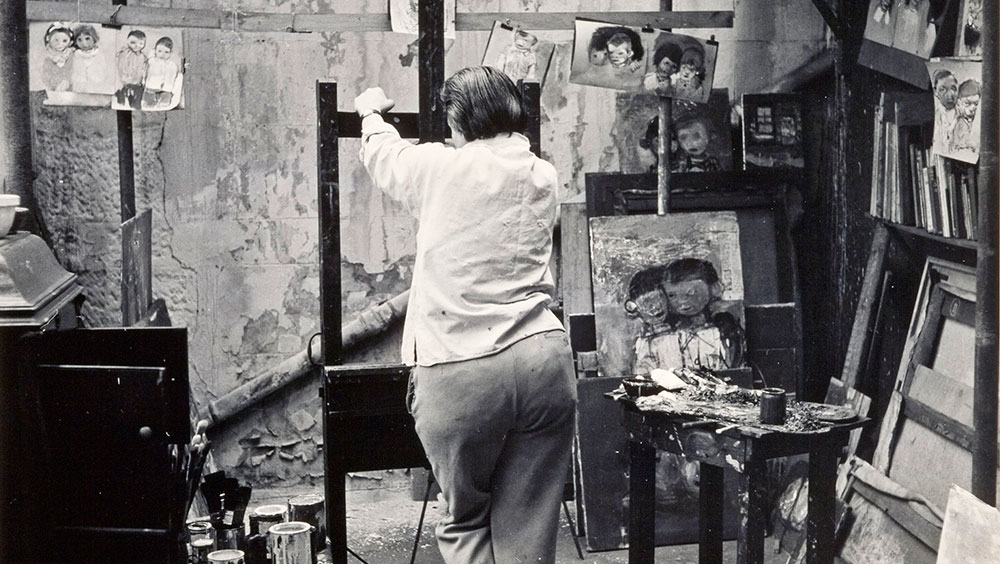 When I was a child
we counted the crests of the waves
way out to sea.

We called them
white-bearded billy goats.

Now there are so many tumbling about
and the wind won’t allow
us to stand still,

the whipped up waters
emerald green
under the scudding clouds,

or stop thinking how
far we were
and are
from where we wanted to go.

Although it is said that the English-born Scottish painter Joan Eardley (1921-63) was not bothered by, or interested in, becoming a successful painter, nor by making it commercially, there is no doubt that she was passionate about her calling, and her death, at the age of 42, from breast cancer, cut short her career in its prime. Who knows how much further she might have gone had she lived on?

To mark the centenary of her birth, the Scottish Gallery in Edinburgh is hosting a celebratory, two-room exhibition of her works from its collection – including the best-known and well-loved earlier sketches and paintings of street urchins in Glasgow, but with a focus on her later years in the remote north-eastern coastal village of Catterline, south of Aberdeen.

In a series of podcasts produced by National Galleries Scotland, also to mark the centenary, the host, the painter and broadcaster Lachlan Goudie, suggests to the art journalist Jan Patience that these two distinct settings might have given space for expression to two very different sides of Eardley’s personality. Patience agrees, noting that Eardley was prone to depression and mood swings – even recurrent neck pains and headaches – and in the archive of her letters, there is a line which states: “A terrible helpless, hopeless feeling has come upon me. Everything seems to be such a dreadful unending struggle.” As Goudie describes, however, the paintings seem almost ready for a fight, they are so full of energy. Whether they depict the loneliness of the rugged Kincardineshire coastline or the crowdedness of the inner-city tenements, where children age before their time, caring for younger siblings, there is an energy and a spirit to the works that simply cannot leave any onlooker cold. Eardley herself, in an audio archive excerpt, denies painting her emotions, saying: “I do feel the more you know something, the more you can get out of it. The more it gives to you. I don’t think I am painting what I feel about scenery but certainly not scenery.” It is the subject that fascinates her, whatever and wherever that might be.

With the Glasgow children, Eardley worked to capture their character, usually starting with single portraits – often of moving subjects – which she latterly grouped together to form painted compositions. The Macaulay Children (1957) is the only known commissioned work she made, and takes, as its subject, the five children of William Macaulay and his wife, a daughter of Sir David Russell of Markinch and Iona. Apparently neither Eardley nor the children were enthusiastic about the sittings, and the outcome is a tribute to Eardley’s regard for Bill Macaulay, the senior partner of the Scottish Gallery, and her guide through the commercial art world (which she largely eschewed). Her efforts pay off, as she captures the children full of mischief and childish vigour. 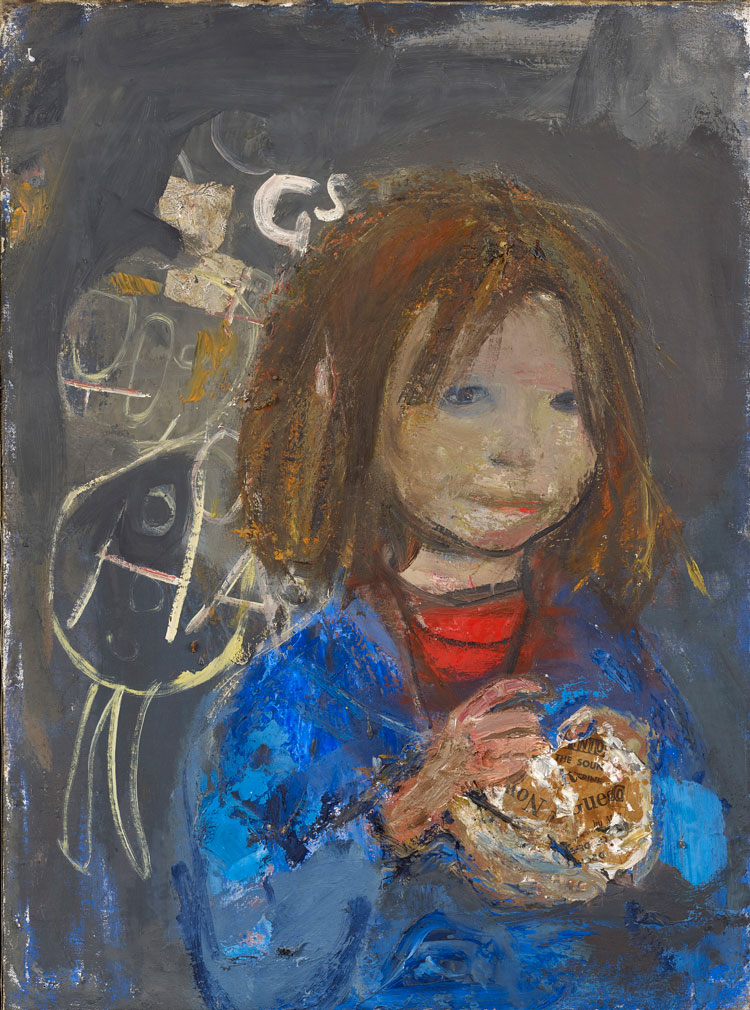 Joan Eardley. Girl with a Poke of Chips. Oil on canvas with newspaper, 68 x 50 cm.

While she certainly made paintings – frequently incorporating elements of collage: in Girl With a Poke of Chips (c1960-63), for example, the newspaper in which the chips are wrapped is real – her primary medium was drawing, and more than 1,300 were catalogued in her studio inventory after she died. Her preferred drawing medium was pastel, for the speed which could be employed, as might be seen, for example, in The Striped Cardigan (1962).

A great contrast might be enjoyed, as well, between the exquisite detail in the chalk drawing Woman Knitting and the incredibly quick and sparse pastel head of Old Woman (both c1948), where both, no matter the method and style, seem, somehow, to equally capture the spirit of their sitter.

There are many of the famous paintings and drawings of children playing games in tenement doorways, groups of huddled figures, children’s heads, street corners and windows. As is concluded in the wonderful documentary Three Scottish Painters, directed by Laurence Henson in 1963: “Thus the eye and the heart of Joan Eardley: observation that is keen yet kind.” Girl in Yellow Holding Baby (c1959-63), where Eardley uses pentimenti to capture what one can only assume to be an older sister bouncing a younger sibling on her knee, must surely have influenced Jenny Saville (who, after all, also studied at Glasgow School of Art) every bit as much as Leonardo da Vinci in her Reproduction drawing (after the Leonardo cartoon) charcoal-and-chalk series (2009-10).

Then came Catterline. Eardley didn’t visit until May 1951, when she was 29, and in Aberdeen to set up an exhibition. At the time, the village consisted of little more than 30 cottages, some coastguard buildings and a pier. Yet, it seems, she fell in love, returning time and again over the next few years, until she began renting a cottage there in 1954. As Patience says: “She was drawn to the margins, to the sights that people overlooked generally, that weren’t regarded by painters as worthy subject matter. I think Catterline just caught her.”

It took a number of years before she began to draw the sea – some suggest it was too imposing – but she worked with the houses, the cliffs and the fields behind the coast, especially in late summer and autumn. Mostly, again, she drew – details and vignettes – but, sometimes, perhaps with a painting in mind, she would add a strip of paper to extend her composition. One thing she never did in Catterline was paint people. It was as if she associated them solely with the city.

Not afraid of working outdoors, nor of experimenting with materials, many of Eardley’s works from this period include grains and seeds, some doubtless deliberate, with their stems pressed into her impasto paint; some partly accidental as a hazard of her working method. Ripening Barley (c1960-62), for example, has overtones of Anselm Kiefer, but without the words, whereas Catterline Landscape (1962) demonstrates her own intervention into the impasto, using the end of her brush to draw into the paint. Some of her seascapes – and once she did dare take on the sea as subject matter, how wonderfully she did so – are weatherbeaten and splattered by the foaming, fuming spume, for Eardley’s technique was to throw the board outside and see what the weather would do to it in preparation. Who needs primer?!

But the energy of nature was no match for the energy of Eardley. Her choice to paint on hardboard was partly out of practical considerations: availability, cost and expediency; it was something of robust quality, available in large sheets that she could cut down (she preferred a square format), which she could pick up at the local hardware store in Arbroath. To watch her in action in Three Scottish Painters is simply exhausting. Perhaps unsurprisingly, if annoyingly mysoginistic, many critics of the time refer to her work in terms of its strength and masculinity. As Goudie notes: “When you look at an Eardley painting, especially these ones of the sea and the landscape around Catterline, there is this sense of a physical wrestling match.” She spoke of the blue sky as the curse of the landscape [painter], and one can imagine her, like JMW Turner, strapped to the mast of a ship, or some equivalent, in martyrdom to her cause. Indeed, after moving from her middle-class upbringing and the city to the remote village of Catterline, Eardley had to adapt, initially, to a lack of electricity, indoor toilets and baths. But she was so focused on her work that seemingly nothing else mattered, not even her health, which she ignored to the point whereby her breast cancer was diagnosed too late for anything to be done. She never lived with a partner – and was, in her letters, openly lesbian, although whether actively remains unclear – and did not have children. She enjoyed a simple life, avoiding domesticity and distraction so that she was free to concentrate fairly single-mindedly on the development of her practice.

Even Eardley’s paints were homemade, and she ground her own pigments. This allowed her the freedom to manipulate the consistency of the paint, so she could have much stiffer paints for the impasto passages, and more runny, dilute paint splashed over the top or used as a wash. Her mark-making was economical, and as precise as it appears wild, with a sculptural quality, almost abstract in her later seascape pieces. Looking closely at her paintings, one can see that, while there is some wet-in-wet working, there are also pieces that she has clearly left for weeks, or even months, before returning to rework a particular detail. Patience notes how standing in front of the biggest works – of the sea especially – has you “rock[ing] back on your heels. There is such a power in them.” Sadly, this is something that cannot be experienced in the virtual exhibition, which is such a shame, since, for me, so much of Eardley’s power is in her presence. The narrator in Three Scottish Painters suggests: “Eardley tries to find the beauty of stillness after storm,” but I would argue rather that she sought far more to find the beauty in the eye of the storm.

Despite how irrelevant recognition might have been to her, Eardley was picked out as an exceptional talent even as a student at Glasgow School of Art (1940-43). She died just at the point when she was gaining increasing recognition in Scotland and beyond. Doubtless, had she been a man, her star would have continued to rise posthumously; as a woman, it did not do so as much as it deserved. It is precisely for this reason that the Scottish Women and the Arts Research Network, or SWARN as it is more commonly known, was set up by Glasgow University, including the Hunterian Special Collection and Archives, in 2018. Together with other organisations such as the Glasgow School of Art, Paisley Museum, Glasgow Women’s Library, Glasgow Museums and the National Galleries of Scotland, SWARN is the driving force behind this exhibition, but the Eardley celebration is just the starting point, and the group plans to celebrate many other female artists.

Hopefully, her centenary year will prove the moment when a serious appraisal of Eardley’s work takes place, and when one might consider, as Gilbert’s poem, with which I opened, so lyrically puts it, just how far she maybe secretly wanted – or, at least, deserved – to go. Despite the limitations of an online exhibition, as someone already converted to the joys of an Eardley drawing or painting, it is certainly better than nothing, especially if you are unable to travel to Edinburgh. While I hope many people will go to the Scottish Galleries in person, and experience Patience’s sense of being rocked on their heels, I’d certainly rather join in the centenary celebrations from afar than not at all – as I hope many others will, too. 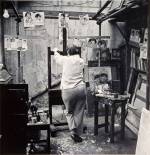