Now in its final year, Jerwood Contemporary Painters opens a window on to the diverse practice of 24 emerging artists. The exhibition brings their vibrant works together under the light of a crisp white gallery. All have graduated from UK art schools since 2000 and each receives an equal share of the £30,000 prize money from the Jerwood Charitable Foundation.

The funding lends support at a critical point in the artists’ careers, a time at which they are just gaining recognition on the professional stage. Selected from hundreds of works by the highly respected artists Paul Huxley RA, Callum Innes and Vanessa Jackson, the canvases bear testimony to a significant resurgence in painting. By pushing pigments in fresh directions, the artists inform the debate about the future of this discipline, in the light of a fast-flowing digital image culture that ties practitioners to a global network of connectivity.

Yet it is the paintings of Titian that continue to be a touchstone for Ben Pritchard. The force of history drives his quest for expression in Bone (holy) (2009), in which a canal-shaped body resonates with organic layers of yellow, green and brown. The microscopic view invokes global themes through singular passages of motion and perception. “Each painting has its own character and tells an individual story,” he says. Pritchard grew up in Detroit in the US, but developed his love of oil painting at the Royal Academy Schools in London. He acknowledges the influence of Pop artist Roy Lichtenstein while tapping into the darker undercurrents of Abstract Expressionist Mark Rothko. Pritchard was selected as a “talent to watch” by Royal Academy Secretary and Chief Executive Charles Saumarez-Smith in 2008.

Like Pritchard, J.A. Nicholls believes that the materiality of the creative process is key. The artist brings together fragments that have a trace of existence elsewhere to capture the feeling of a landscape on her canvas. Cut-out shapes of flowers and foliage compose the field of vision in Land (2009). Layers of porous and grainy textures slide across the chalky surface. A Royal College of Art graduate, Nicholls emphasises the importance of drawing, the bedrock of the visual arts, in making collages that become the source of her paintings. “The integrity of each mark is important. I have to get the right combination of registers,” she says. “The seduction of paint is critical.” This intertextuality results in a lively encounter with the viewer.

The vitality of language infuses the practice of Danish artist Thomas Hylander. Often he will start a painting with a string of words that hold personal resonance. “I am inspired by poetic nuggets that make images flare up in your mind and snippets that stand out in everyday conversations with friends,” he says. In the gallery hangs Triangulate (2008), exhibited at his solo show at Vilma Gold last year. The silvery impression conjures up a childhood haunt: a swampy forest where the artist spent time felling giant hogweeds and lighting fires. Although the place is a distant one, it still holds the potential for transformation. “Looking again, the image appears like a fossil in a stone, with a shallow depth and faint illusion. It reflects my process of working with the traces and tidemarks left on the surface,” he says. “I find it interesting that so much of memory turns into fiction through its retelling, and time zones link up.” The artist highlights the capacity of webs of association to bring shifts in perception.

Norwegian artist Hanneline Visnes presents a crepuscular canvas Stain (2009), in which a scattering of yellow stardust illuminates silhouettes of trees against the dark night sky. The meshing of purple and green branches signifies her fascination with deep-rooted belief systems of religion, history and politics, and the ways they manifest in artefacts. “I interweave precious objects, jewellery, landscapes and portraits. I have a longstanding interest in patterns, detail and mass, particularly qualities of intricacy and complexity that suggest an extraordinary effort and a high level of skill,” she says. The artist recently visited Iran to study Persian carpets, which display a close study of nature in their birds and flowers, based on mathematical formulae related to observations of planetary movements in the sky. “A carpet becomes an object of beauty through being a poetic and precise depiction of the human drive to understand the universe,” she reflects.

Visnes taps into a global network of connectivity, buoyed by international mobility and an engagement with new technology. Whereas some artists employ digital media to assemble memories of foreign locales into webs of association, others seek to still the stream of imagery that flows through our everyday lives. Having trained as a photographer, Mimei Thompson uses a Photoshop palette to map scenes that mingle far-flung strands of her diverse cultural background. Yellow tree (2009) alludes to vibrant rhythms of her time in Africa and the flatness of Japanese prints in Tokyo. “I try to conjure up the intense light of the Southern Hemisphere on a cold winter’s day,” she says. Lotte Gertz freezes a playful dance of loops and zigzags, which mirrors our fragmented image culture in Untitled (distortion of good taste) (2009). In describing her meditative creative process, Gertz connects with the practice of Visnes, with whom she studied at Glasgow School of Art. “Making collages slowly provides an antidote to the fast-moving world around us,” she observes.

Daniel Sinsel presents a tropical trio of yellow recorders weaving in and out of a turquoise canvas in Untitled (2009). The synaesthetic spatial arrangement speaks of the inspiration that he finds in music: the recorders symbolise a pastoral arcadia. The motif came into existence as a result of a playful approach, and was then refined into a geometrical form. “I like the process of distilling an image,” he says. “I look for a balance between the sensual and the minimal.” James Ryan builds a three-dimensional space in Dayz (2009), influenced by modernist architecture. By overlaying earthy planes, he aims to describe the flux of the man-made environment. Neil Clements conjures up a sense of flight in his angular canvas: a black rhomboid with two green wings, ’58 (2009). The dramatic work bears a resemblance to the hard-edged colour fields of Ellsworth Kelly: its avian profile cuts through the air.

In counterpoint, several artists question social constructs with their fresh angles on the tradition of portraiture. Lucy Stein celebrates the pleasures of a self-sufficient woman in the turns of Catherine wheel (2009), criticising female objectification in today’s “raunch culture”. Jill Mason tips the concept of an anthropomorphic landscape on its side in Family business (2009), in which a green-fingered creature stands watch over a territory. Inspired by Gustave Courbet’s realism, Iain Hetherington achieves an upside-down element of difference in Composite picture 5(diversified cultural worker) (2009). In a reference to gang culture, a baseball cap and a knife collide with elegant scribbles and markings. The artist challenges the awkwardness of trying to assign categories to society. “I hope my work will encourage people to look at the idea of the ‘other’, which won’t fit neatly into a box,” he concludes.

In their many variant genres, from landscape and still life to portraiture and abstraction, the canvases of Jerwood Contemporary Painters reveal hidden depths and new directions in painting on the professional stage. The collection brings together the achievements of an immensely talented group of international artists. Gazing at the paintings in the exhibition sustains a fascinating dialogue, whereas scrolling across images on a digital screen results in a fleeting exchange. Each painter shows a degree of creative autonomy that resists today’s geographically and socially homogenous networks of mass culture, and opens up new destinations. 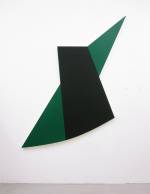 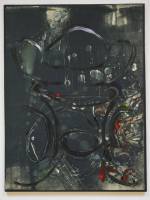 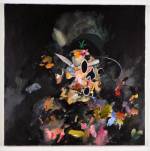 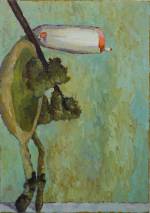 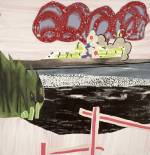 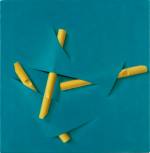 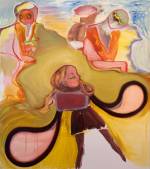