Ahead of his exhibition at Marlborough, London, Jason Brooks showed Studio International around his Gloucestershire studio, revealing some of his inspirations and motivations

For his third exhibition with Marlborough, London, Jason Brooks (b1968) has put together a three-part show of staggering proportions. One room is filled with his huge, incredibly detailed and cinematically cropped, black-and-white portraits of friends and people he considers to have a “discerning eye”. In fact, the airbrushed works are painted solely in black, with any white areas being the paper showing through. Familiar faces surround the viewer – writer and political commentator Will Self, artist Sue Webster, war photographer Don McCullin, fashion designer Erdem – names we probably recognise, but whose faces we maybe do not. Standing under the gaze of so many supersized pairs of eyes, we, the viewer, become the viewed – an intriguing, but unsettling experience. 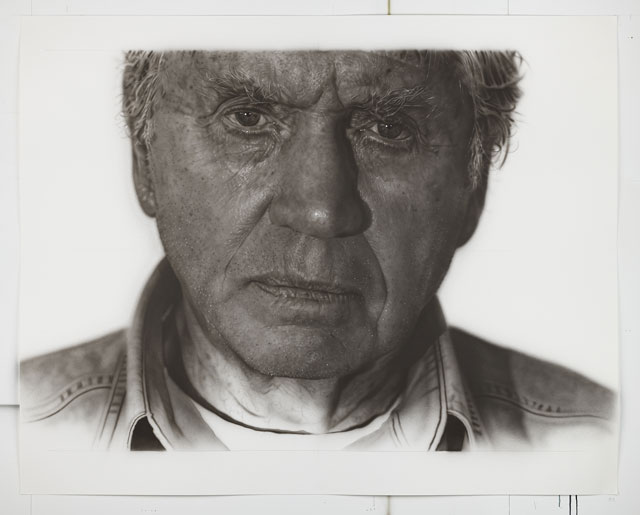 In another space, Brooks is showing his landscape works: remakes of amateur paintings he has collected over the past couple of decades at car boot sales. Taking these vignettes as inspiration, he “goes on a journey” with them, combining airbrush, acrylic and oil paints in such a way as to explore all aspects of painterly language, as well as his place within art history. In his Gloucestershire studio, he showed us two small works bought on separate occasions, inspired by John Constable’s The Hay Wain (1821), and clearly part of a diptych. In the gallery, viewers can see Brooks’s response to these.

For the final space – conceived as a darkened chapel – Brooks has created a three-metre-tall, black sculpture of the Virgin Mary, veiled, and based on a 19th-century bust. She is surrounded by devotional imagery of Christ and vanitas paintings. 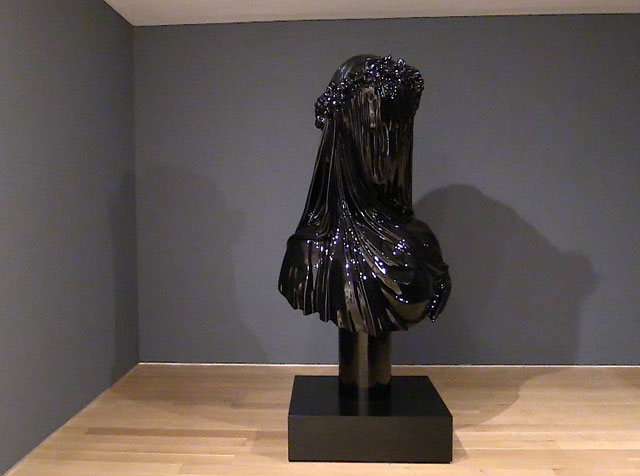 While these three strands are quite disparate and one might be forgiven for not immediately recognising them all as the work of one and the same artist, Brooks argues that there is a common thread running through his work, namely, as the title of the exhibition states, that the subject is not the subject. What you think you are seeing is not necessarily what you think it is at all. But this is really only something you can discover by getting up close and personal with his work, uncovering the startling trompe l’oeil effects, seeing the painterly pixellation in his otherwise hyperrealist portraits, and entering into the cinematic world that Brooks creates.

Jason Brooks: The Subject is Not the Subject
Marlborough, London
9 February – 10 March 2018