Pace has represented James Turrell since 1967 and this relationship has now been cemented with his first solo exhibition at Pace London.

With recent major shows across America at the Guggenheim, Los Angeles County Museum of Art and the Museum of Fine Arts, Houston, the time is right for a London-based exhibition of his work. Systematic and manageable to approach, four recent works are displayed: two pieces from the Tall Glass series, Sojourn (2006) and Sensing Thought (2005) and two previously unseen works from the Wide Glass series (2014).

Although wall-based, Turrell’s works extend far beyond their frame. Light emitted from within extends and fills the available space, allowing for a complete sensory environment. Necessary to the realisation of the exhibition, therefore, is the division of space to provide each work with an independent segment in which to exist. In the ground floor gallery, three custom-designed chambers harness the light for our viewing purposes (the fourth piece is installed in the first floor gallery). Much of Turrell’s work requires adaptive surroundings because it is built around “space” rather than “matter”. Using space as a material in the gallery environment, he plays with our preconceived notions of perception; often we don’t recognise the presence of space without either an abundance of it or a lack.

His Skyspace series, for example, requires specific proportions of enclosed space, along with the possibility of an aperture in the ceiling, to reveal a block of optimistically blue sky. Many structures are developed in existing spaces, where galleries have the structural flexibility to adapt to this. Often, however, they are independent forms that lend themselves to sculpture parks, where space and structure have most freedom. As well as the space in the room, theworks displayed at Pace also use the space behind their frames. Each work is based on a concave aperture, which recedes away from the viewer and “into the wall”. I decide “space” should be listed as a material used by Turrell, because space really is a requirement for his work; it is not solid matter, but light that occupies this space, yet this does not make it any less important.

Turrell’s famous 1977 purchase of the Roden Crater, an extinct volcanic cinder cone in the Arizona desert, is perhaps the best example of his obsession with space. Here, rocky terrain and blue sky extend as far as the eye can see. Installed by the Earth, the shape of the crater forms a natural sculpture for Turrell’s purposes in capturing light, following the heritage of monumental forms and temples such as Machu Picchu, Angkor Wat and the Egyptian Pyramids. Here, we get a sense of the scale that Turrell is capable of working with.

The apertures of the Wide Glass series works are rectangular, but with curved corners like stretched aeroplane windows. This reminds me of the fact that at 16 years old, Turrell received his pilot’s licence. He worked transporting supplies by aeroplane to remote mines, and later as an aerial cartographer. With the sky as his natural habitat, perhaps this curved vantage point is etched in his memory from his journeys through the atmosphere. He recreates this panoramic effect where the light is blurred and passes into an endless distance as it fades across the room. We look out into a plane of colour, just like the sky. One phase of the colour cycle is a sky blue, circled by smooth, white cirrostratus clouds. The frame is now a rearview mirror, and I imagine Turrell, originally from California, on the road, driving through the desert, the blue sky just before dusk captured in his mirror. Soon colours morph, through purple, to a refreshing green with a red centre and a thin white boundary. Like a watermelon, the colours are layered and the frame is the oval shape of the fruit, squashed and widened.

Glass is the titular material of Turrell’s works at Pace. To the eye, the glass is invisible because of the shape of the installation and the quality of the light. Replacing “smoke and mirrors” with “light and glass”, Turrell plays with the variation of effects these material combinations can have on our limited notions and preconceived expectations of perception. Have you ever walked into a glass door, or felt a solid knock on your hand as you reached out in to space? You can expect the same feeling, if you try too hard to figure out the science behind his art. And this isn’t an “Emperor’s New Contemporary Art” moment. The works require thought and experimentation to create the phenomenon where light blurs the existence of glass to our eye. In this situation, the invisibility of glass aligns itself with the invisibility of space. One material is solid and the other is gas, yet our eye does not distinguish between the two. Turrell is master practitioner as he delights in presenting two opposites that appear identical to the viewer.

The quality of light forms an ambiguous haze, which is emitted from the centre of the works. Figures in the gallery appear black, as our eyes adjust to distinguish between the foreground and the source of light. The colours are soft and unobtrusive, allowing a moment of reflection. You need to spend time in each room to understand the rhythm of colours, which rotate in a slow cycle. There is no distinction between the colours: Tall Glass series: Sojourn (2006) began with a peach pink, blending slowly into purple, and the transition is seamless, like a sunset that appears and disappears. Although he uses LED lights, Turrell manages to reproduce the natural effects of light, and, through this, he appeals to the viewer in a very basic sense; light is a central part of our existence. It drives us and nourishes us, affecting our body clock and our happiness, and, consequently, the viewer is left feeling refreshed. Beyond material, space and shape, his work is very much a personal, meditative experience. A visit to Pace will leave you feeling healthy and energised, as Turrell brings a piece of blue sky, the Arizona desert and a watermelon to the depths of winter in London. 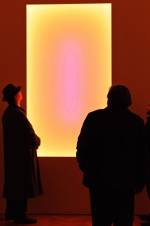 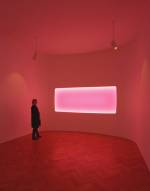