James Richards: Music for the gift – Wales in Venice, 2017

James Richards: Music for the gift – Wales in Venice, 2017

Wales has always punched above its weight at the Biennale, and 2017 is no exception. This year – for its eighth successive appearance - the selected artist is James Richards, a multimedia artist whose work combines layers or fragments of video, sound and still images to reveal ‘the possibility of the personal amid the chaos of mass media’

Based in the modest chapel of Santa Maria Ausiliatrice, James Richards’ work for the Venice Biennale, titled Music for the gift, occupies several rooms. In the chapel itself, the Cardiff-born, Berlin-based artist has placed a site-responsive, six-channel sound installation, Migratory Motor Complex (2017), the fruit of a collaboration with students from the Royal Welsh College of Music and Drama (RWCMD), where he recently had a residency. The piece reveals Richards’ background as a percussionist, as it segues with fine judgment of pace and impact through its spine-tingling sequence: from the relentless chant of a football crowd to the sound of breathing; the hypnotic verbal instruction “gentle”; the smash of glass breaking; children’s playground chatter. The curiosity of the listener is instantly engaged by this multisensory experience - its eclectic aural choreography so alien in this spiritual setting, complete with serene frescoes of ascensions and crucifixions, and yet perfectly attuned to the intimate realm of myth, aspiration, oppression and collective submission that this ancient chapel represents. The resulting interior-exterior emotional conflict is nicely expressed in an interlocking grid of bespoke benches designed by James and his production collaborator Matt Fitts, its geometry echoing that of the ancient floor tiles. 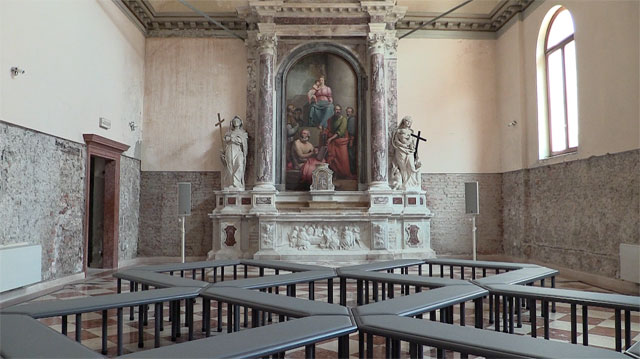 Other work on show includes What Weakens The Flesh is the Flesh Itself (2017), a video collaboration with Steve Reinke, which takes as its starting point a series of photographs found in the private collection of Albrecht Becker - a production designer, photographer and actor imprisoned by the Nazis for his homosexuality – revealing an obsession with body modification. This material is woven into another more contemporary narrative on desire and death. Also in the venue is Voce di Testa, a book collaboration with writer Chris McCormack, meditating on the breaking of the male voice, and Rushes Minotaur (2017), an installation of inkjet prints that scans, stretches, stacks and recalibrates two images: a medical close-up of crumbling skin, and a grimy shop front covered in tarpaulin.

Richards’ commission is curated by Hannah Firth, director of Visual Art at Chapter, Cardiff. Music for the gift opens at Chapter on 17 February 2018.

Richards (b1983) studied at Cardiff School of Art and Design before completing a fine art degree at Chelsea College of Art & Design, London. He was nominated for the Turner Prize in 2014, and in 2016 he had the solo exhibitions Request and Antisongs at the ICA, London, Crumb Mahogany at Bergen Kunsthall, and Radio at Night at the Museum of Contemporary Art Bordeaux.