In the Age of Giorgione

In the Age of Giorgione

This exhibition endeavours to pin down a phantom of art history, a man whose paintings are so elusive that his influence is almost the stuff of myth

A young man, an archer in a black hat, turns towards us, his mouth open in mid-sentence. His face is an impression, an almost ghostly visage emerging from the darkness with an unsure outline that dissolves at the neck. With the same sfumato technique favoured by Leonardo da Vinci, the shadows on this man’s face have been rendered edgeless and shifting. Like a ghost that cannot speak, he implores us to understand him. “Me,” he seems to be saying. “It happened to me.” His gloved hand touches his chest and is reflected in his highly polished breastplate not in a gesture of humility, practised by the downward-gazing Renaissance saints, but in a bid to assert his personhood. This is a man telling us his own story. A romantic might conclude – given the gentle aspect and beribboned shoulders of this young archer – that he is talking about a love discovered, or perhaps a love lost.

He is not the only one who wishes to speak to us. With a direct manner that echoes the archer, an old woman points to herself, or perhaps to her heart, and, like the archer, her mouth is open, mid-sentence. Her hair has thinned, her skin is papery and her nose thickened with the years – a picture of old age. An inscription, reading “with age” attempts to fix this woman as an allegory. This is what time has done to me, the inscription explains on her behalf, and this is what time will do to you too. But she is so much more than an archetype. Her portrait is a detailed study of a real woman with intelligent eyes and a piercing gaze.

Portrait of an Archer and La Vecchia (c1508-10) are two of the paintings in this exhibition attributed to Giorgio Barbarelli da Castelfranco, otherwise known as Giorgione. He would never reach La Vecchia’s advanced years – he died around 1510 in his early 30s, probably of the plague – but, despite his short career, he was a hugely influential artist. His name is attached to some of those more celebrated masters of the time. It is thought that he studied under Giovanni Bellini, later surpassing his master with his innovatively psychological portraits, and he worked alongside, and heavily influenced, the young Titian. The two, in fact, became professional rivals. Titian’s early work was so like Giorgione’s that historians have struggled to distinguish the two. While Titian’s name still rings in the minds of the art-going public, Giorgione’s has fallen away somewhat. But for those deeply entrenched in the world of Renaissance art, the mysterious “Great George” presents riddles that are too tempting to ignore.

Giorgione’s landscapes are even more enigmatic than his portraits. His most famous, The Tempest (c1508), shows a naked woman sitting on a grassy bank breastfeeding a child while a nonchalantly posed man looks on. Lightning flashes against the storm clouds in the distance. Two awkward, truncated pillars rise up from a brief section of wall like broken teeth. Do they indicate a life cut short? Is this a painting about the fragile nature of life? Although theories abound – and convincing ones at that – no one knows for sure. “I have never understood his figures, nor have I ever, with my questioning, found anyone who did,” said Giorgio Vasari in his The Lives of the Artists. It is unlike the garrulous Vasari to be short of words.

This exhibition gives visitors the chance to play detective with a similarly mysterious landscape. Il Tramonto (The Sunset) (c1502-05) was discovered badly damaged in the 1930s and attempts at restoration have only deepened the mystery. Saint George sits on his nervous white stead on a rocky plateau, while slaying a rather unimpressively labrador-sized dragon. This is a 20th-century addition, as are a number of odd little creatures lurking in the shadows. A hermit on the far right of the composition has been heavily repainted, casting doubt on whether there was ever a figure on that ruined section of canvas. But the watery orange sunset that hovers above the impossibly brilliant blue hills in the distance has been proven to be the product of the author’s brush. A spindly sapling rises bravely in the centre of the canvas, announcing itself the star of the composition. Below it sits the only figures that are accepted as Giorgione’s. But no one knows who they are. The older man tends the leg of his younger companion. Are these men Saint Roch and his attendant Gothardus? Or does this travelling duo have classical roots? The truth remains frustratingly out of reach.

As well as restoring Giorgione’s reputation as a master of mystery and insight, this exhibition also offers us works by his contemporaries for renewed consideration. Aside from the titanic Titian, a lesser name features heavily. Giovanni Cariani (around 1487-1547) is not an artist most will have heard of. The drawings that have been attributed to him are not the most accomplished examples of Renaissance draughtsmanship and his Lute Player is an oddly proportioned soul with a right eye that slips so far around the side of his face that were he viewed face-on, he would look most odd. But his portraits of plump, rosy women casting sideways glances in various allegorical guises are mischievous, beautifully coloured pieces that belong alongside the works of the Giorgione.

With so few extant works from Giorgione’s short career to familiarise oneself with, it is unlikely that you will leave this exhibition with any great sense of Giorgione the man, as his life and life’s work remain largely obscure. But the remarkable influence he had on his contemporaries provides us with tangible echoes of his innovations. This exhibition’s biggest achievement is to tease out the “Giogionesque” in painting at this seminal moment in the history of the Renaissance. And with so much left open-ended it is a good opportunity to train your eye and play the attribution game. 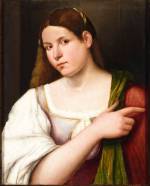 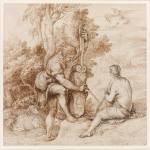 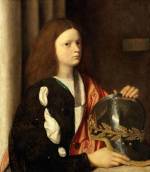 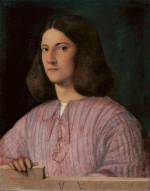 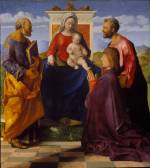