The Sultan’s World: The Ottoman Orient in Renaissance Art

The Sultan’s World: The Ottoman Orient in Renaissance Art

East meets west in this dazzling show, which focuses on the attraction the Ottoman empire held for western artists for more than two centuries. This jewel of an exhibition brings together art and valuable objects rarely seen in such abundance

The year 1453 represents the most important milestone in early modern history. Constantinople falls and the victory of the Ottoman empire signals the end of the Byzantine one. The new and powerful Ottoman empire would thrive until 1922, making the Roman Empire look like a mere blip in history. Still, although the defeat had been bloody, the west, through the continued organisation of diplomatic trade missions starting in the 16th century, became entranced by the exotic abundance and pomp of the oriental sultans. Wonderment for “the other” and the unknown was seen through the eyes of the artists who joined these missions and, upon returning, depicted their powerful experience via travel books, diaries, costume books and works of art.

As the press release of The Sultan’s World makes clear: “A mutual fascination brought about a never before seen cultural exchange between east and west.”1 In the cleverly designed and, this time, compact rooms of Bozar, Brussels’ Centre for Fine Arts, this fascination translates into the display of roughly 160 works of art and valuable objects in the shape of paintings, maps, fabrics, scientific instruments, weaponry, tapestries and coins, from the period 1420 to 1620. The number of collaborative global collections is astonishing, with more than 70 of them sending pieces to Brussels and, later on, Kraków, where this exhibition’s journey will end. Visitors will be treated to work by names such as Albrecht Dürer, Jacopo Tintoretto, Gentile Bellini and Paolo Veronese. However – and it is why this exhibition works so well – they will also be able to “wonder” about a world still little known, through objects not often shown together on this scale.

In addition to showing off “great” names, the exhibition also focuses on lesser-known art from Hungary and Poland, two countries in direct and close contact with the Ottoman empire. The Sultan’s World is composed of six thematic chapters appearing in dimly lit rooms that, at times, resemble “curiosity cabinets”, a display genre that greatly enhances visitors’ visual experience.

In A Changing World, a section devoted to the initial rise of the Ottoman empire, the visitor is welcomed by a plethora of 15th- and 16th-century maps, produced by artists who responded to the growing demand for information on the Ottomans as they expanded their realm, and an unusual turban-shaped helmet of c1540. The helmet – seen by some as plunder looted by Spanish troops trying to reclaim land lost to the Ottomans, and by others as an allusion to the defeated enemy – is a powerful “tool of entrance” as the visitor acquires an initial experience of vast eastern success in conquering the west.

In Visual Polemics, in which global adversaries such as Islam versus Christianity, orient versus occident, or emperor versus sultan, are juxtaposed, different visual interpretations of “friends and enemies” appear as propaganda tools. A wonderful example of an allegorical representation of the Ottomans as ferocious enemies is the Portrait of Sultan Selim II with a Dragon (1580-85). Yet another voice rises with the protest of the Dutch rebels who fought against the regime of the Spanish Habsburg monarchy and preferred, as they sang, “Half-Moons on the sleeve, rather Turkish than Papist”.2 A protestant badge (1574) in the shape of a half-moon, a Turkish symbol, visualises their point.

Authority and identity is given to the customs of the unknown Ottomans in Going East, Artists’ Travels and Depicting the Sultan. These parts of the exhibition explore how western artists, such as Bellini, travelled east via trade routes, wanting to explore Constantinople, often at the invitation of the Sultan, who had developed an interest in Venetian and Flemish art. A beautiful and fine example of an Italian portraying an Ottoman is the centrally displayed Portrait of Sultan Mehmed II, which the Venetian colour virtuoso painted in 1480 in the service of the sultan. Other specimens of Ottoman power appear in engravings, paintings and woodcuts of the famous sultan Suleiman the Magnificent, who reigned from 1520 until 1566, after the death of Mehmed II. A complicated yet sophisticated rendering of the sultan is a Venetian woodcut of 1532, in which the sultan wears a jewel-studded helmet, elements of which are separately visualised in a wonderful painting on parchment, entitled Agraffe with Ostriche Feathers (c1530). A true collection of Suleiman likenesses is topped by the genius brushstroke of the Florentine Cristofano dell’Altissimo, who also depicted the sultan’s daughter Cameria complete with magnificent headdress (1552-57). This section is further embellished by Titian’s well-known Portrait of the Sultana Roxelana (c1545-1555) and Veronese’s depictions of the same Sultan Suleiman and Mehmed II, among others.

The final sections of this imposing exhibition, The Lure of the Orient and The Ottoman Orient and European Courtly Culture include an examination of the technological and artistic achievements of the Ottoman state, which were used by western artists in a number of different depictions, for example in textiles and decorative arts. Important examples include Dürer’s Oriental Rider (c1495), in which Ottoman costume and ceremonial clothing can be examined, Vittore Carpaccio’s Seated Ottoman (after 1500), and the incredibly detailed and impressive Story of Esther (c1550-60), in which numerous elements of the Ottoman empire can be found, making this painting, as the catalogue explains, a “United Nations” illustration of its time.3 This part, for the sheer number of quality pieces, is perhaps the most exciting of the entire exhibition.

Striking Hungarian works such as the unusual Funerary Portrait of Gáspár Illésházy (1648) are juxtaposed with Italian masters such as Lorenzo Lotto, Sandro Botticelli and the female artist Sofonisba Anguissola, who, with her undisputed masterpiece The Chess Game(1555), shows three sisters playing chess on an oriental rug used as tablecloth. The exhibition’s final offerings inform the observer of the megalomaniac tastes of, among others, Maximilian I of Habsburg and Ferdinand II, who, through the commissioning of colourful spectacles in the shape of tournaments, festivities and triumphal entries, manifested their political ambitions and plans, often geared against the Ottoman invaders. Seemingly playful yet propagandistic examples are the Masks of Moors as Interchangeable Visors, worn to mobilise the public to fight against the Ottomans, or the delicate An Elephant Carrying a Moorish Castle before a Christian Fortress (1551), in which an elephant is charged with the Ottoman attack on a fortress that signified Christianity, still, at the heart of western consciousness.

The Sultan’s World is a milestone exhibition unparalleled in its kind. It is a journey through two centuries of cultural exchange that produced only the highest quality of production in a great variety of media, which are all on display here. What starts with the bold statement of an oriental helmet, ends with the serene View of the Seraglio at Constantinople painted by Hans de Jode in 1659, as if all battles had been fought and a fabulous coffee in Bozar’s sophisticated salons were ahead.

• The Sultan’s World: The Ottoman Orient in Renaissance Art is at Bozar, Brussels until 31 May, when it will travel to the Muzeum Narodowe, Kraków, www.mnk.pl 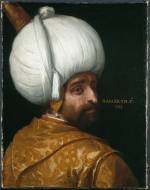 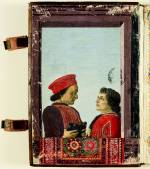 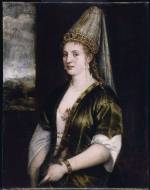 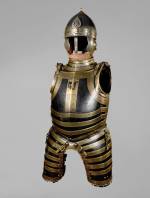 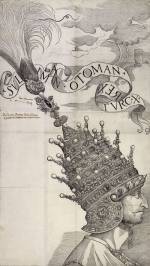 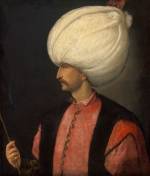 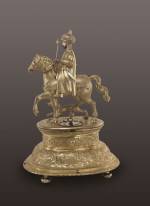 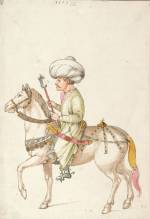 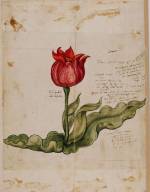