Nathaniel Pitt explains that he looked to the processes of artists, instead of the subjects of their work, to curate the show. The three artists in this show, he says, are not starting from media, but from their curiosity 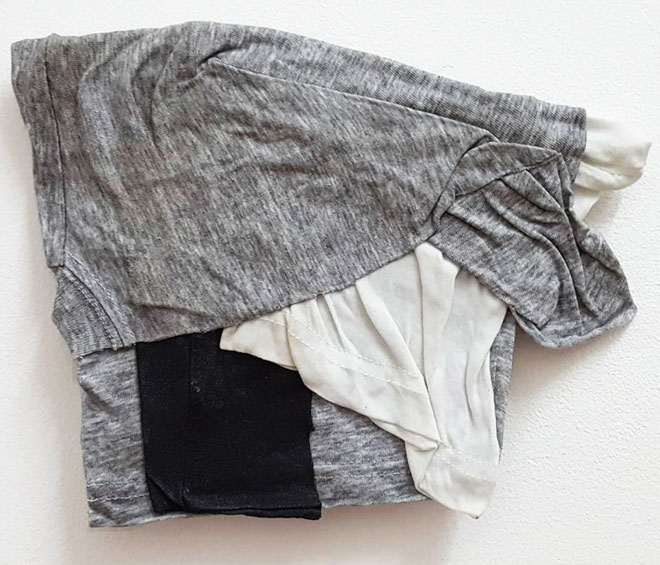 “I wouldn’t say I was a curator, really,” says Nathaniel Pitt, sitting on a sofa in an office at the IMT Gallery, a few hours before the opening of the show Image Music Text, which he has curated. “I’m not from the art world. I’ve gone from studying art as an artist, into education, into running a gallery.”

Pitt has carved his own path with an open mind and a cooperative approach. He trained as an artist at Falmouth College of Arts, then at the University of Birmingham, after which he had a stint in New York, started teaching art, and then joined De Appel in Amsterdam on one of its inaugural programmes for gallerists, which he describes as “a really good introduction to the art world”.

He then expanded his education, attending Wolverhampton University from 2007-9. It attracted him because of the teaching staff. “It was like a Frankfurt movement of staff, who all are really interested in Marxism - John Roberts and Cornford & Cross. They are all socialist thinkers.” All these experiences have resulted in his own vision, the contemporary art gallery Division of Labour, which he opened in Worcester in 2012, deciding to focus his programme on artists making socially engaged work.

The gallery became somewhat of a research project around its title, Division of Labour, says Pitt. “Division of labour is an interesting concept that was coined by the Scottish economist Adam Smith to describe the advent of capitalism,” explains Pitt. “Marx was critical about the ‘division of labour’, believing it suppressed the masses. It happened in Birmingham where they realised that people would just make pins, or just make tacks, so they literally divided the labour.

“I’m interested in artists who are working with a social engagement that involves labour, leisure time, how we learn, and these sort of structures. I work with duos such as Cornford & Cross, and most of the artists I work with use fabricators. It becomes part of the practice to work with people from other walks of life.”

Pitt actively pursues collaboration, believing that it is the catalyst to the advancement of art. Before working with IMT, he worked with commercial and non-commercial galleries, including Belfast Photography Exchange, Edge Projects, the Library of Birmingham and Edel Assanti. “I love working with other galleries. I’m very open minded, but there’s got to be a shared vision,” he says.

Division of Labour started out as a non-profit organisation, but opened up commercially in 2013, when Pitt found that it encouraged more opportunities for collaboration, including participating in art fairs. It was at Art Brussels that he met the director of the IMT Gallery, Lindsay Friend, who invited Pitt to curate an exhibition at the gallery, which was just down the road from Pitt’s new outpost of Division of Labour in Bethnal Green, east London.

Pitt recognised similarities in the artists they both worked with. “I think because Division of Labour has such a narrow remit, I was interested in a gallery that set itself up as being interested in image, music and text. It was well known early on for being rigorous with sound art and text works, with artists such as David Burrows and Plastique Fantastique. It also has a really strong academic background. Mark Jackson, the curator, who is now working in Newcastle, developed a very academic tone to a lot of the work – it was well thought-out, well researched.”

Pitt looked to the processes of artists, instead of the subjects of their work, to curate the show, choosing the three artists Andrew Gillespie, Andrew Lacon and Joanne Masding. “There are elements of image, music and text, yet none of the work alludes to that – there’s no sound work, there’s no text and, really, there’s no image, but there is a lot of sculpture and any images are collages of cut-ups.”

Gillespie is an artist who breaks down the concept of the image in his work. His collages show fractured black-and-white images, pieced back together to investigate the visual vocabulary of popular music culture. How much of a visual hook is required for something recognisable to be legible, he asks. Standing in the gallery, Gillespie explained: “I think about them in quite traditional painterly terms, thinking about composition and the exposure and deletion of key moments in a cliched image. They are all made from relatively ubiquitous iconic rock images and that process raises quite a few issues as to why certain historical cultural figures are depicted in certain ways and how they gain iconic status.”

As well as image, it is the materiality that matters. Gillespie chooses images that are also physical. “The poster is something that’s really loaded. You have these shifting attachments with it. It has so much powerful resonance with a viewer at a certain time, which is really quite raw in your adolescence, but, at the same time, it’s really disposable.”

The exhibition is a democratic meeting of materials, where no one piece dominates. While the works of the three artists are not visually similar, together they present a clear vision of what materiality might be. The artists worked hard to think about the formal relationships between the works. Masding says of the show’s curation: “It has been really important to us setting up the different kind of forms we are working with, and orchestrating the various conversations they can have with each other, whether it’s image, sculpture or surface.”

The three artists have a lot in common. They all live and work in Birmingham and have research-led practices. Pitt says: “The really good thing about Birmingham is that there are loads of artists researching – seriously, rigorously, working. There’s a real sense that archive is important. The artists I’ve worked with in Birmingham have all got something they’re interested in, and they really mine it – go out, collect, and work from that. They’re not starting from media, they are starting from their curiosity.”

Masding’s work could initially be mistaken for collage, but in fact, New Rehang (series 1) #1 (2015) is made of pages from a British Museum catalogue. Only the images remain and the text has been hand-erased with a rubber. “It’s like translating one object into an image and the image comes back to the 3D form,” she says. Masding’s research starts with the museum. “I’m interested in museum objects and the things that help you read their levels of value – the staging of objects in vitrines and presentation devices.” The museum catalogue is one such object. In her sculptural piece Slabs and Facsimiles (2016), she translates the information from the catalogue on to a plaster surface. In another gallery room, she takes those images again and translates them into sparkling laser holograms: the antique forms from the British Museum collection have been translated into a material of today. Material becomes language.

Lacon’s interest in art also starts with the museum and the concepts of documentation and display. Pitt says: “His only access to art when he was growing up was through the local museum and that was through the photography of famous renaissance paintings or the Elgin marbles from the British Museum.” This led him to studying photography, but he tends to work more with sculpture. Lacon, standing in the gallery in front of his coloured cast concrete sculpture, a low, oblong, bench-like shape in block pastel colours (Formations 02 (after Mexico), 2016), explained how he went from photography to sculpture. “I work in the opposite way, back from images to create a physical tangible object. I recently went on a research trip to Mexico to look at pre-Hispanic sculpture and display in municipal museums, which is where the colours and composition come from – the Mexican baroque style.”

For each of the artists, research is also a material process, which leads them to new processes and ways of working. “One of the thing all my artists have in common is that they never make the same work twice,” says Pitt. “I like working with the artists rather than the art sometimes.” Maybe Pitt’s hybrid style of working hasn’t been categorised by the art world yet, but he is definitely doing something interesting. 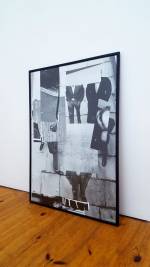 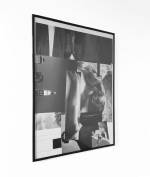 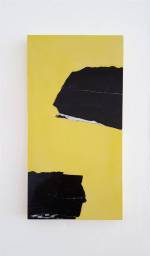 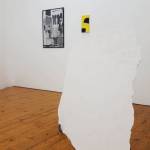 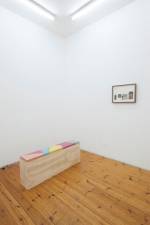