Alexandra Kokoli and Basia Śliwińska: ‘As long as ‘home’ remains confining … it will continue to loom large in art practices informed and committed to feminism’

Alexandra Kokoli and Basia Śliwińska: ‘As long as ‘home’ remains confining … it will continue to loom large in art practices informed and committed to feminism’

Studio International visited the Home Strike exhibition during the gallery’s “Resistance Lunch”, held in celebration of International Women’s Day and the opening of the exhibition. Collaboratively curated by Alexandra Kokoli, senior lecturer in visual culture at Middlesex University, and Basia Sliwinska, senior lecturer in culture and historical studies at University of the Arts London, Home Strike revisits 1970s feminism and “proposes to inflict its currency through intersectional considerations of class and the biopolitical”. In their accompanying text, Kokoli and Sliwinska warn us of the “shifting notion of Home”, and the problematic sense of belonging.

Referencing French philosopher Gaston Bachelard, who argued that home (the oneiric house – the house where we were born) is where our psychological selves are formed, where, for instance, we learn how to climb a stair, Kokoli and Sliwinska counter this cosy concept by addressing the uncomfortable reality of the unacknowledged labour of women in the home.  In Home Strike, the “domestic space is disrupted by the works of four women artists” whose practice focuses on exploring and resisting (in various and ingenious ways), “the persistent feminisation of domestic ideologies, household maintenance and the exploitation of women’s bodies”. 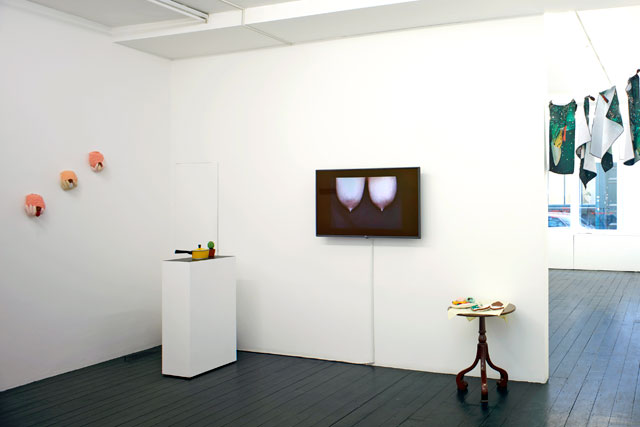 The video work titled Fountain (2000) by the Istanbul-based artist and activist CANAN displays her heavily lactating breasts – as the milk drips from her nipples, the heightened audio track echoes around the gallery space, sounding like an insistent resonant tap. This “feminist Fountain,” states the exhibition catalogue by Kokoli and Śliwińska, “exorcises the phallic arrogance of Duchamp’s readymade while also challenging the breezy irreverence of Bruce Nauman’s 1960s riff”. 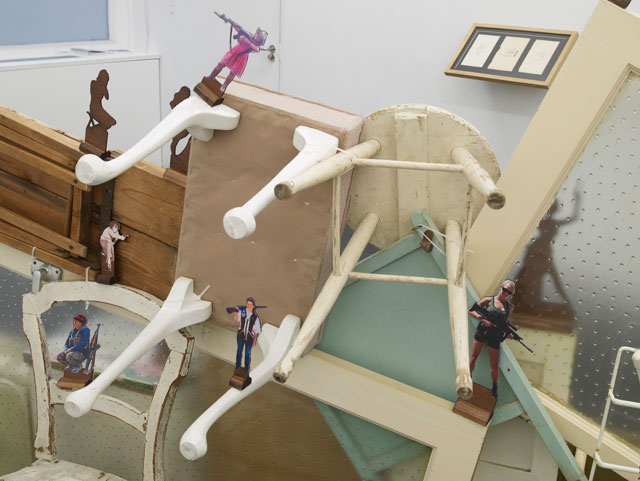 British artist Paula Chambers has built a large barricade crossing the main gallery area, constructed from a motley collection of broken stolen and found pieces of familiar looking furniture. Once homely in their soft powder colours, they now form a wall of defence guarded by a battalion of small cutout wooden figures. These figures, all women, are real and fictitious: the images sourced from the internet, they include such characters as Princess Leia and Annie Oakley, just two of a strong band of women ready to defend their kind in the event of a domestic battle. 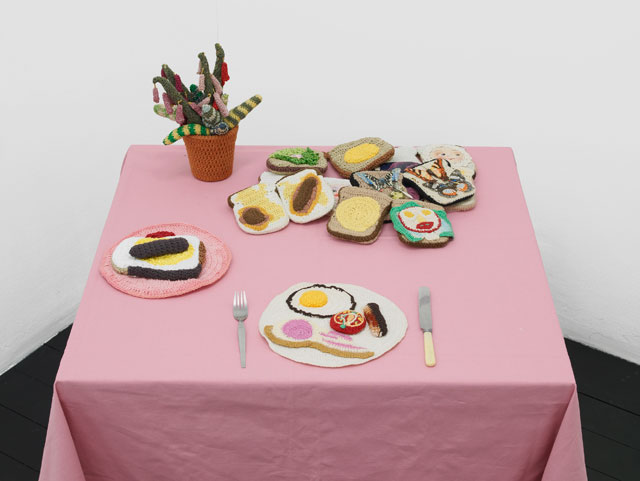 Yet while Richardson’s works entice a haptic and optical delight of materials, playing with memory and childhood, they also “subvert the womanly connotations of ‘labour of love’ cooking and craft”, poking fun at petty hierarchies in art institutions, and questioning the position of the woman and the mother in the home.

In the video The Resistance Kitchen (2017), Krakow-based artist Małgorzata Markiewicz, responding to the policies from the current rightwing Polish government that violate women’s rights; tells us: “Things are going bad, to put it mildly. And not just here in Poland.” Wearing military garb, Markiewicz presents the viewer with readily available natural poisonous ingredients, including belladonna, otherwise known as deadly nightshade, and lily of the valley. She proceeds to give instructions as to how to mix these plants into poisonous dishes. This, she tells us, “may be the only tool of resistance available to women”.

Also displayed in the Home Strike exhibition are tea towels printed with botanical-like drawings of poisonous plants, awarding them scientific credibility, and so Markiewicz, states the exhibition catalogue “turn[s] the tables on [a woman’s] obligation to nurture and cherish … confronting the bourgeois expectation for women to entertain [in the home] … that simultaneously renders them as complicit objects of desire”.

Interview by MK PALOMAR
Filmed and edited by MARTIN KENNEDY 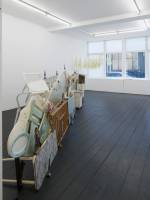