Rotterdam is striving to regain a position on the culture city map, and this exhibition is for effect. Take a mediaeval artist to pieces, examine the bits, and put him together again. This used to be called deconstruction, and was mandatory for rising critics in the l980s. But today, in the hands of ambitious curators, the effect can be to confuse rather than to revise and clarify. Bosch remains a household name, and this exhibition does little to add to that identity.

The impact of Bosch’s notebooks, together with carefully selected paintings, reminds us, among other things, of Bruegel’s own debt to Bosch as the initiator of key images. A work such as ‘Big fish eat little fish’ by Bruegel can reveal this debt without any undue prompting. Bosch was an inventor of imaginary beasts, and Bruegel did acknowledge this debt. In the first edition of the engraving by Pieter van der Heyden, for which Bruegel’s drawing was the preparatory work, Bosch’s name is duly credited, as ‘inventor’. Bosch is also re-emphasised as a ‘spoiler’ painter, upsetting Renaissance perfectibility by the introduction or insertion of the inconceivable: the two panels, ‘Saint John on Patmos’ and ‘Saint John the Baptist’ are cleverly brought together here, to this end. ‘The Pedlar’ is shown with its proper encasing; three panels as one narrative, not as isolated works. Bosch soars above the menagerie of monsters that he created, a painter who could reveal the devils inside the human mind, when the mediaeval world only saw them outside. Bosch reveals a grace and balance of ingredients here. We do not need further reconstructions of hypotheses about Bosch’s mysterious life. The mystery that has served his public well through the ages will continue.

Bosch has also served as an inspiration for 20th century painters – the Australian Arthur Boyd springs to mind, who drew both from Bosch and from Bruegel. Bosch, perhaps, represents the antithesis of urbanity and civility, instead he represents the unpredictable, unfathomable nature against which agrarian society remains pitted. Witness, pedlar, the spread of foot-and-mouth disease, the massive slaughtering and the sense of uncontrollability against nature’s way. 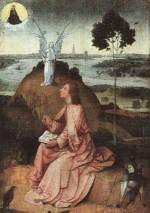