Sculptures and drawings, set in the very place they were created, along with Moore’s own vast collection of press cuttings, brings us close to an artist, who though in his 60s, had lost none of his power 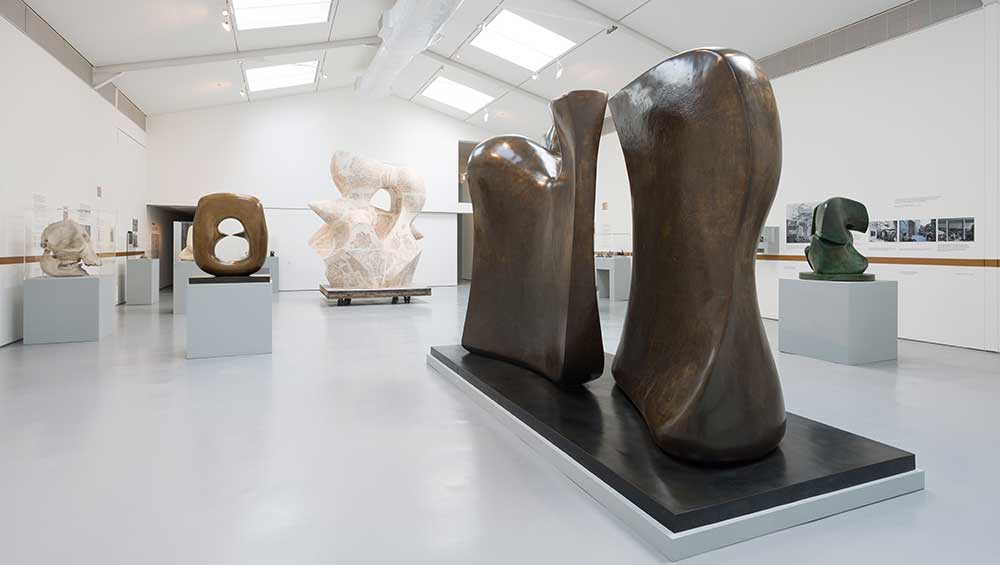 Henry Moore’s early fascination with bones, fossils and stones is apparent to anyone lucky enough to visit his charmingly ramshackle maquette studio in Hertfordshire. Its shelves and surfaces are piled with a ghostly array of pale plaster and clay models, small and medium, as well as genuine skulls and jawbones – perhaps ancestral relics of the sheep who stand in the field beyond the shed, visible from this same window where he sat to do his famous sheep drawings. To anyone standing next to one of his monumental bronze works, whatever they are intended to represent, that sense of being wrought from the earth, from the ground beneath you, from the elements around and within you is evident: a visceral, intuitive acknowledgement and dialogue with your own inner landscape conjured by these shapes in the outer landscape; essential, primal, elemental. 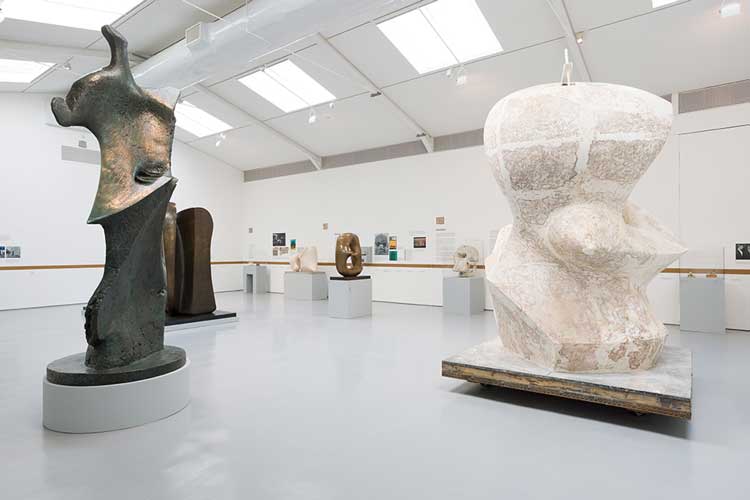 The 1960s was apparently a period when Moore felt he could return to forms inspired by nature, having dedicated the 40s and 50s to meeting the public mood for more figurative, human and mythical responses to the inhumanity of the second world war. But as the world shifted towards a more optimistic, future-facing mode, those original, natural sources presented a ripe launch point for him to embrace the new spirit of abstraction that was sizzling through the art scene. They also lent themselves to scaling up, a demand he was happy to meet as his studio space and team of assistants expanded in response to his growing international reputation and market, which included a demand, from the US in particular, for monumental works in public spaces. 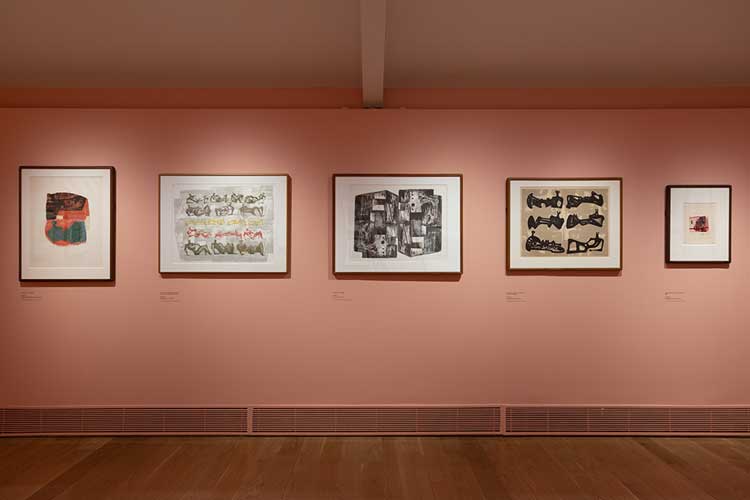 The figure – as he says in one of the fascinating documentary films in this exhibition – doesn’t really work at scale. Bones - their ridges, curves and hollows - work beautifully at two, three or more metres high. However, it is in this decade that he found that a figure, if broken down, could work at scale, as with his Reclining Figure (1963-65) for the Lincoln Centre in New York (nearly 5 metres/16 ft high and 9 metres/30ft long), the painstaking and time-consuming creation of which is beautifully documented in a CBS film shown here. 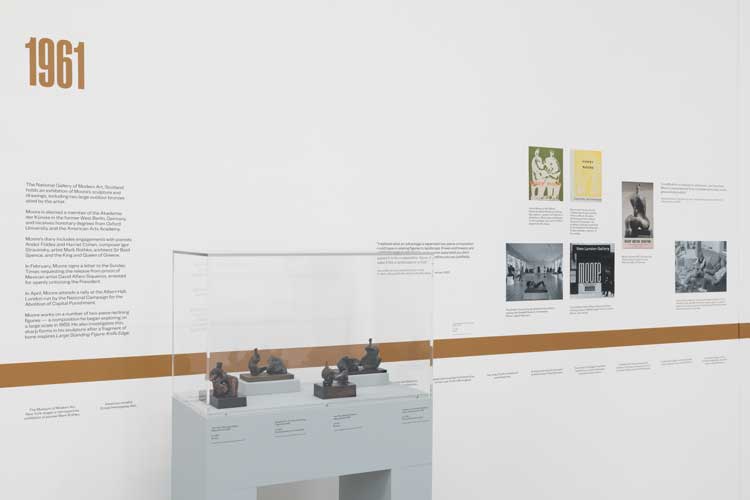 The richness with which this show evokes that whole decade via Moore’s work and travels is one of the best things about it. That is thanks, in large part, to Moore’s immense ambition and sense of his own legacy: he has an archive of clippings, films, photographs, diaries and news and magazine articles that is almost unparalleled among 20th-century artists. Such was his confidence that he first signed up to a clippings agency to monitor his press in the 1920s. All of this is now stored in a handsome archive building that was completed on this site in 2018. 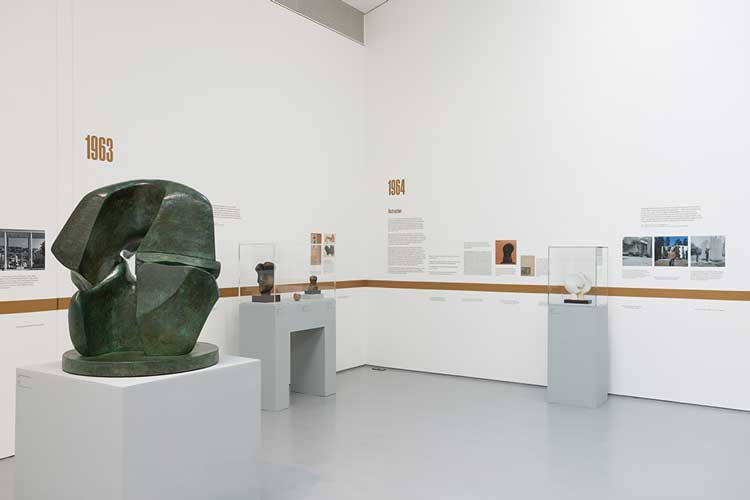 It is always fascinating when a show can reveal an artist to you anew through the framing of their practice in a particular economic, political and cultural context. And it’s all here, in the spacious, barn-like contemporary gallery behind his maquette studio, in the same field as those grazing sheep. We have the diary entries that show him lunching with royalty, catching flights to New York and Berlin, where the Noack foundry made most of his work. There is a timeline that flags up significant landmarks – and helpful captions that describe pivotal events, such as the touring show of Moore’s work that the British Council took to Germany, Switzerland, Italy, France, the Netherlands, Austria and Denmark, which very much powered demand for his work in Europe – and no doubt prompted the 1959 interview in Time magazine, on the cover of which he also starred. I particularly liked the more humble, everyday archive material – such as black-and-white photos of Moore and his assistants relaxing, showing how his art was very much a team effort; you rarely get that perspective from an artist, especially of Moore’s stature. 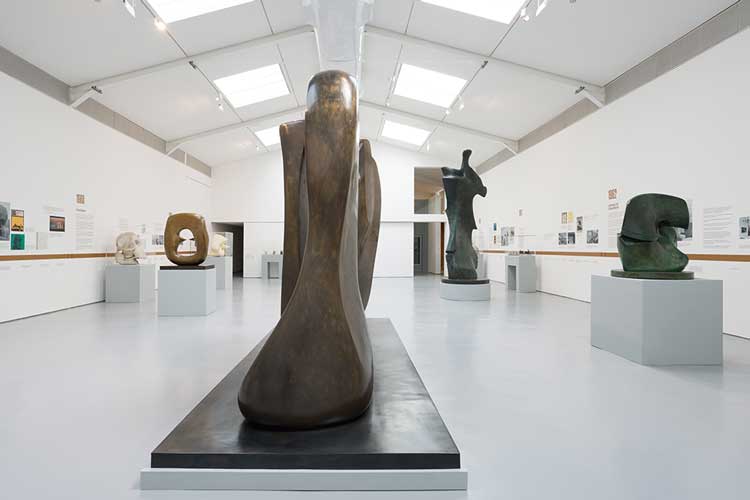 There is photographic and film footage of the construction of the huge marquee here that would allow him to model and refine his Reclining Figure statue. There is plenty of well-paced text to describe what was happening in the world around him, as well as in his world. We see that he was a founding member of CND (something I had not known). We see him supporting younger artists, among them Bridget Riley, the construction of whose studio he helped to fund. And we see him falling out with them, most notably his former protege Anthony Caro, one of several signatories to an open letter to the Times, in 1967, complaining about the Tate Gallery’s dedication of permanent space to Moore (suggesting that he was now the old guard, and the new guard felt the shadow he was casting was too long). However, Moore was also taking pains to stay abreast of art world issues and trends: from the clippings and filmed conversations, his desire to still feel relevant, to feel part of the zeitgeist is palpable, though it doesn’t seem as if Moore ever really doubted himself or his place in the firmament – a continuation, as he has said, in the line of great sculptors including Michelangelo and Rodin. He continued experimenting. We have evidence here of him working with fibreglass and polystyrene – the latter a pivotal material for his modelling as it enabled him to create sculptures at scale and then lift and carry them around his grounds to see how they looked from all angles. 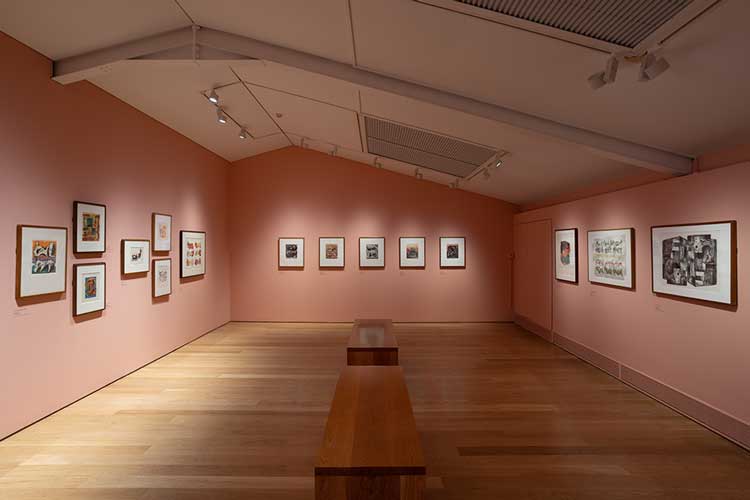 In the smaller gallery upstairs, there are more than 20 delightful, rarely seen, lithographic prints and drawings by Moore, showing his enthusiasm for the newly invented felt-tip pen, in several vibrant drawings that show a real lust for vividness and colour – another thing Moore is not known for. As the senior curator of collections, Hannah Higham, says: “This is Moore’s private pleasure, if you like - drawing. It’s a way of exploring ideas you can’t put into sculpture. His use of colour is wonderful. He absolutely embraced it in terms of work on paper.” 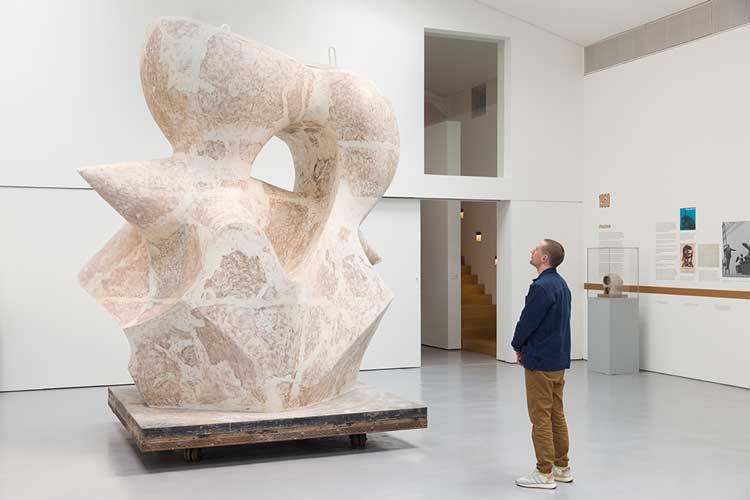 Then there is the sculpture on show. Thirty of his sculptures from this decade – out of the 200 or more he produced in the 60s - plus models and sketches are displayed here, including some that have never been exhibited, like Large Spindle Piece (1968). Despite being in his 60s during this decade, he clearly comes across as an artist at the peak of his powers. 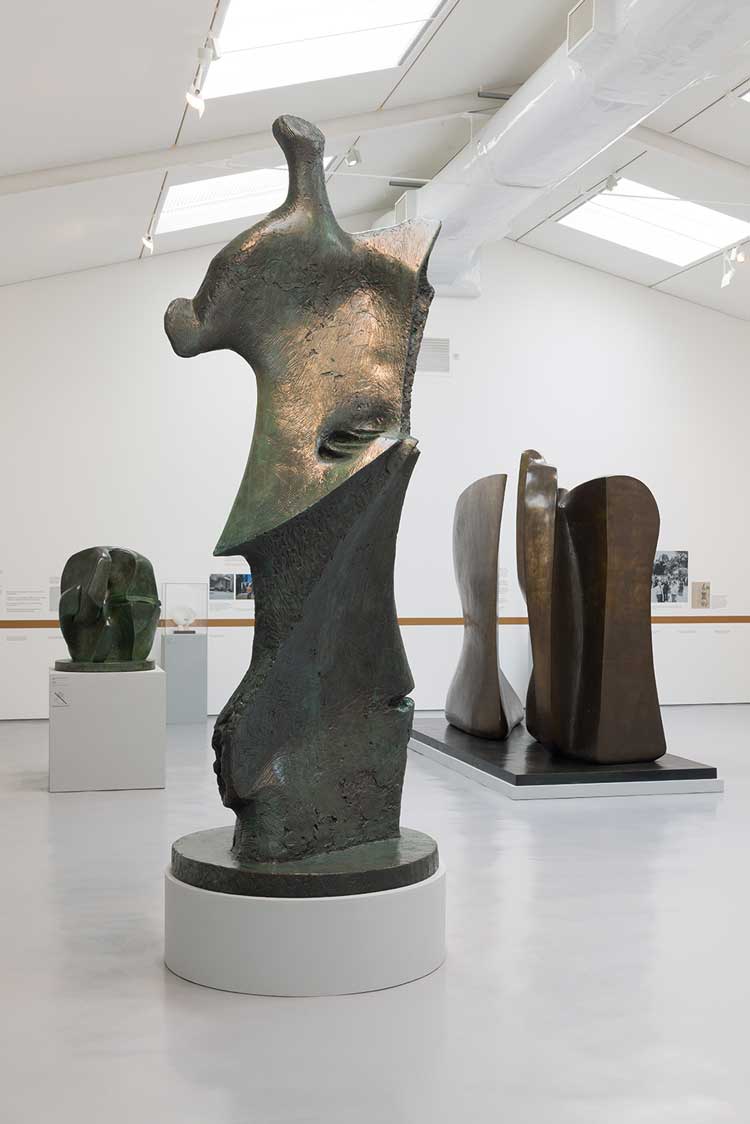 It is particularly resonant seeing these works in the place where they were conceived and created: this collection of farm buildings, both domestic and agricultural, at Perry Green, has played a major part in his life and his work. Though the Henry Moore Foundation was only established here in 1977 by Moore and his family, they moved into the modest farmhouse, Hoglands, in 1940 (at the time living in one half of it, the other part being occupied by the farmer and his family). Over the years, as his income, popularity and ambition grew, he refurbished the house and converted the various outbuildings into studios – dedicated spaces for maquettes, for carving and printmaking – eventually owning about 70 acres of land. He paved over areas around the outbuildings so that he could move his sculptures in and out. 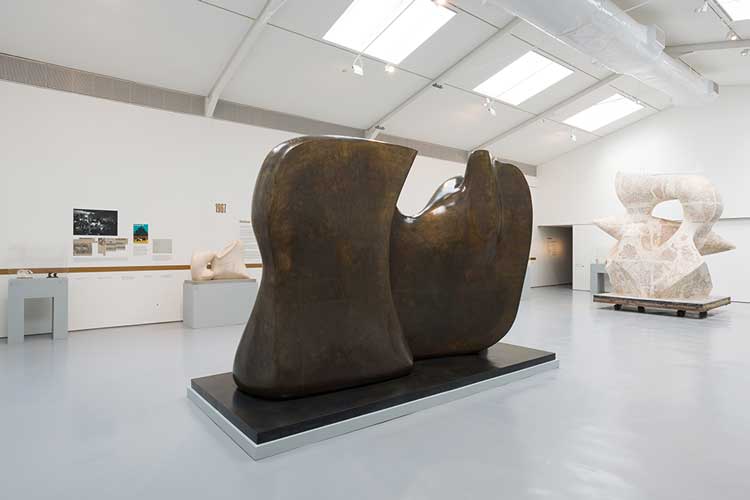 As the art world (re)turns its gaze to nature – whether exploring mycelial substructures, celebrating species diversity or conjuring new pollinator pathways – it is certainly timely that those who manage Moore’s estate have seized the opportunity to celebrate these natural inspirations and remind us of his enduring power and influence. But it also shows that an artist never succeeds in isolation – motivation and talent are all very well, but the right kind of accommodation combined with a wide and influential network of support takes you a whole lot further.