Nothing kills like acclaim. The bright lights attract, of course, but they also repel. When the glow and the clamour die down, we might find ourselves finding a deeper fascination with the darkened corners, the unpopulated wildernesses. One noble activity we might consider in the meantime is to steal the truly great from the pedestals to which we have assigned them; to revive, and allow them to revive us, rather than deify.

There is little denying that Henri Matisse was a great artist, but therein lies the problem. Critical debate surrounding Tate Modern’s bountiful exhibition of his late decoupage work has fallen into two opposing camps; those who exalt him, often in purple prose, as a visionary, and those who see the worship of such simplistic “juvenile” art as a case of the emperor’s new clothes. Walking through The Cut-Outs, it is apparent that there is something profoundly wrong with the framing of this debate. More importantly, it is clear that Matisse is way beyond both his advocates and his detractors, and disingenuous positions of elitism and philistinism. His work is instead defined by honesty, clarity and, a point not often mentioned by commentators, by what it does not say.

Everyone knows Matisse is all about joy: the joy of dance, colour and life. Though this is self-evident and rightly celebrated, it is a mistake just to accept it or to move on without asking, what is this joy? The standard response would be a synonym (vitality, perhaps) that would add little to an understanding of any real depth. Instead, let’s consider joy as a form of defiance, in the face of grave illness and mortality. Given three years to live (he would survive for more than a decade), Matisse was wheelchair-bound when he created these works. Their very existence is owed to the fact he could no longer paint as he once could. Instead, with assistance, he sculpted in 2D with scissors and paper, or as he called it, “carving into colour”. The results, as authoritatively and delightfully shown in this exhibition, were bold, spirited and inventive, as many critics have attested. To separate them from the impending darkness, however, is to insist on enjoying fireworks in broad daylight. Life, they suggest, is a miracle not just in spite of its transience but because of it. Even the form is one of impermanence; flimsy materials pinned together rather than fixed. They will not last but, for the moment, crucially they do.

Many of the traits that mark Matisse out as a great modern master are here in abundance. His iconic Blue Nude series show that his skill with line and the expansive power of minimalism (no paradox in Matisse’s hands) was undimmed and arguably heightened. If there is nothing quite as radical as Woman with a Hat (1905) or Red Room (Harmony in Red) (1908), it is because the courteous old wild beast (“eminently reasonable”, in the words of Guillaume Apollinaire) had already changed the parameters of art himself. Despite this, Matisse was still risking critical hostility through the calculated simplicity and the modest transcendence of his work. Matisse trusted his audience to appreciate that he was deliberately unlearning his technical excesses, or rather stripping them to their essence. Many rewarded him with ridicule, seeing amateurism where there was a quiet courage and humility. He carried on regardless, as he would if showered, as now, with praise. Neither saint nor savage, Matisse was a dedicated and inspired draughtsman of poise and pigment. In the preliminary work here for his serene Chapel of the Rosary at Vence, it was not merely the divine he was focused on; it was art, a three-letter word as loosely defined as god but consistently more reliable.

The Cut-Outs go some distance in recognising Matisse as a pioneer in the graphic sense. The Fall of Icarus (1943) at first appears stationary until you realise that the central character is falling into the picture, towards a watery grave behind, or more accurately beneath, him. Constructed in the depths of the second world war, the bursts of light could be the detonations of bombs or alternatively the sun repeatedly glimpsed as the mythical figure tumbles, almost in a dance, to the sea. The latter interpretation would suggest a manipulation of time and space to match Matisse’s rival Picasso. Intriguingly, the basic but evocative silhouette of the falling figure, and indeed much of the design work here, calls to mind the work of later artists such as Saul Bass. With Matisse’s tendency to recycle and replicate his own work in drafts and alternative media (the variations of The Dance, for example), he pre-empted Andy Warhol. In a room dedicated to Matisse’s Jazzseries, we have the basis for many record sleeves, all verve, zing and balance, which followed. The only surprise lies in the revelation that his publisher Tériade had named the sequence rather than Matisse. Which came first then, the music or its image?

This leads us to a crucial consideration regarding The Cut-Outs, best surmised in an appropriate line, both in subject and meaning, from WB Yeats’s Among School Children: “O body swayed to music, O brightening glance,/How can we know the dancer from the dance?” Much as we might feign otherwise, there is little possibility of, or point to, separating the work from the man. There is an aura that exists, whether we admit it or not, to art created by such an artist. It is fashionable to bemoan the cult of personality, but the person and their stories matter. We are, after all, narrative creatures. Matisse confirmed this when he claimed that the artist is the medium. It would be counterproductive then to ignore the circumstances and emotions under which these works began to be constructed; Matisse’s studio had been emptied following a traumatic separation from his wife, his country had fallen to the Nazis, and his daughter Marguerite had been tortured as a member of the French Resistance and had escaped being transported to a concentration camp by the Gestapo. In such a climate, increasingly debilitated by illness, old age and the aftermath of surgery, Matisse’s studio became a cell. Yet, remembering that Matisse had first become an artist while convalescing as a child from appendicitis, it was also an escape.

With the inability to physically roam freely, Matisse changed his methods of producing art, both aesthetically and conceptually. Having traditionally drawn from real life, he now embarked on excursions into memory, mainly in the form of impressions rather than archival recollection. This is most evident here in his Oceanic works, which reference a time he spent in Polynesia several years previously. These pieces appear to feature submarine creatures found in rock pools or under microscopic slides, in billowing coral reefs or in semi-alien atmospheres from the botanic alphabet of The Lagoon (1946) to the silver bestiary of Oceania, the Sea (1946) to the blossoming halo of The Sheaf (1953). Matisse recognised the geometry in living things and their movement in the sea and air. With The Bees (1948), he developed an idiosyncratic variant of Futurist splicing to capture the insect’s flight. It is a testament to his ingenuity, which continues across a diverse range of modernised images (from stained-glass designs and religious vestments to circus depictions of sword-swallowers and knife-throwers). At times, it is the environment and a kind of kindergarten grandeur he is playing with, as in the Large Decoration with Masks (1953). Yet for all the emphasis on joy, there is poignancy not far from the surface. Matisse referred to his impressive The Parakeet and the Mermaid (1952) as “a little garden all around me where I can walk”, with the tragic unspoken implication that he could not walk and never would again with any ease. Sadness permeates Memory of Oceania (1952) and others with their fragmented memories of times of health and adventure, made by someone who has already passed over a border from which there is ultimately no return.

Matisse never entirely made the break into pure decoration or abstraction but he came close, as Snow Flowers (1951) and The Snail (1953) underscore. The latter is treated as a cornerstone of the exhibition yet, for all its plaudits, it seems curiously unsatisfying and disjointed, intentionally and otherwise. Matisse seems at his most enthralling when he is more emotional than intellectual. The artist once claimed he refused to paint unless he had a sufficient emotion to channel (relying on horse-riding to supply one if necessary). There are many fine examples in The Cut-Outs of his audacious claim that his art could be “a newspaper of the soul”; the vivacious eruption of Violet Leaf on Orange Background (1947), the sensualised melancholy of Blue Nudes, the very definite eroticism of Small Dancer on a Red Background (1937-8). If the folkloric narrative is sometimes enticingly unclear (The Horse, the Rider and the Clown, 1943-4), so too, at times, is the mood (with Two Dancers, 1937-8 seeming initially to writhe in either ecstasy or agony). Rendered immobile, Matisse was forced to work increasingly from his mind and the momentum of the process itself. It seems effortless, but it must have been a gargantuan undertaking. It is tempting to think where he might have gone, following the trajectories of his earlier work, had health and fortune be kinder to him.

Matisse referred to the form, and perhaps the feeling, of the late works exhibited in The Cut-Outs as “the sensation of flight”. It would be trite to suggest he was Icarus falling towards the ocean with the fire bursting in his chest. It would be patronising, too, to assume he was Daedalus, older and wiser, observing the disaster from a safe if mournful cruising altitude above the waves. Matisse was simply an artist, which is no small thing, and one who refused to remain earth-bound in his work or his mind. How can we know the dancer from the dance? Why would we want to? 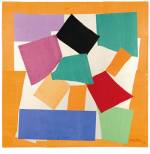 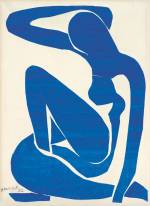 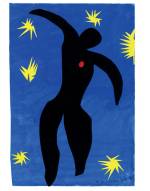