Next year marks the centenary of the poet’s birth and this show, which includes more than 400 of his sound, film and printed works, is the first step in bringing much-needed attention to this pioneering artist 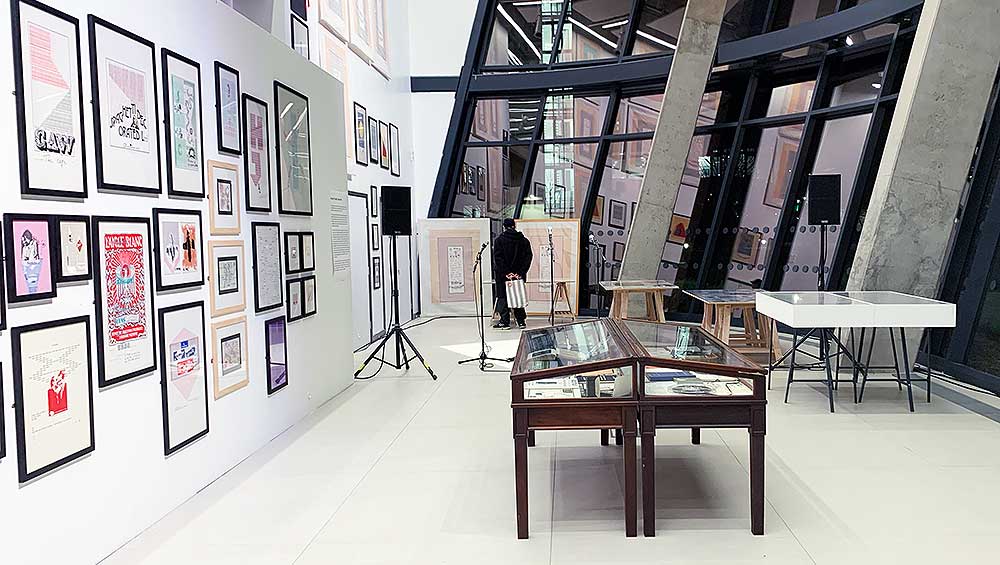 On a dark night in late November, as I approach the large-framed windows of the Leicester Gallery, at the heart of the De Montfort University campus, I can see the gallery walls covered with an array of graphic and visual artworks, as well as multiple vitrines and tables displaying a variety of print and vinyl materials. Three microphones and two large speakers are stretched across the entrance gallery areas, signalling a sense of expectation of an imminent performance. I am here to attend the launch of the first major retrospective of Henri Chopin’s works to take place internationally, curated by the French-born, London-based composer and writer Frédéric Acquaviva. 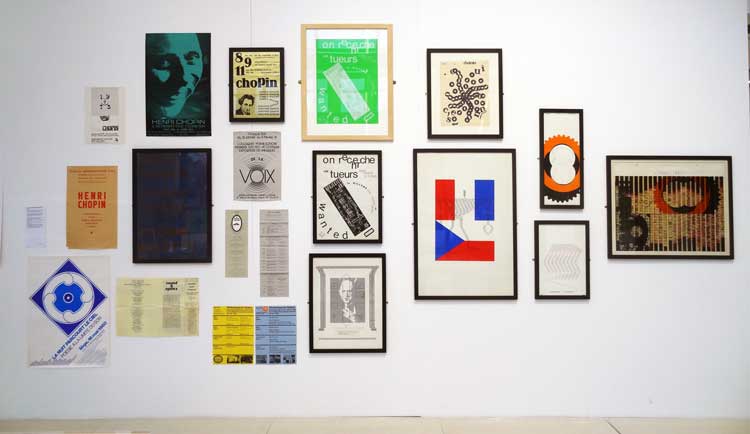 Acquaviva’s show differs from other recent exhibitions in England of Chopin’s works, including a show at Firstsite in Colchester in 2014 and one at the Richard Saltoun Gallery in 2017, by seeking to cover the broad range of Chopin’s oeuvre, including his substantial publishing of the works of others in print, vinyl and zine format. The result is the first comprehensive overview of Chopin’s substantial corpus. More than 400 items are on display. Almost all are drawn from Acquaviva’s personal archive, assembled painstakingly over more than two decades; gaps, meanwhile, are augmented by the inclusion of a handful of works from De Montfort’s own Zurbrugg collection of concrete and fluxus-related materials. Chopin (1922-2008) was featured in 1969 in an early issue of Stereo Headphones, a magazine edited by the poet and artist Nicholas Zurbrugg, who was also responsible for curating, in 1992 in Brisbane, Australia, the first exhibition of Chopin to be organised outside Europe. Zurbrugg had joined De Montfort as a professor in 1995 and, following his sudden death in 2001, he left behind not only a historically important collection of works but also a legacy that this exhibition at the Leicester Gallery plays directly into; the net effect is an astonishing one, where for those both familiar and unfamiliar with the plurality of what Chopin was producing, there is much to spend hours absorbing, contemplating, decoding and enjoying. 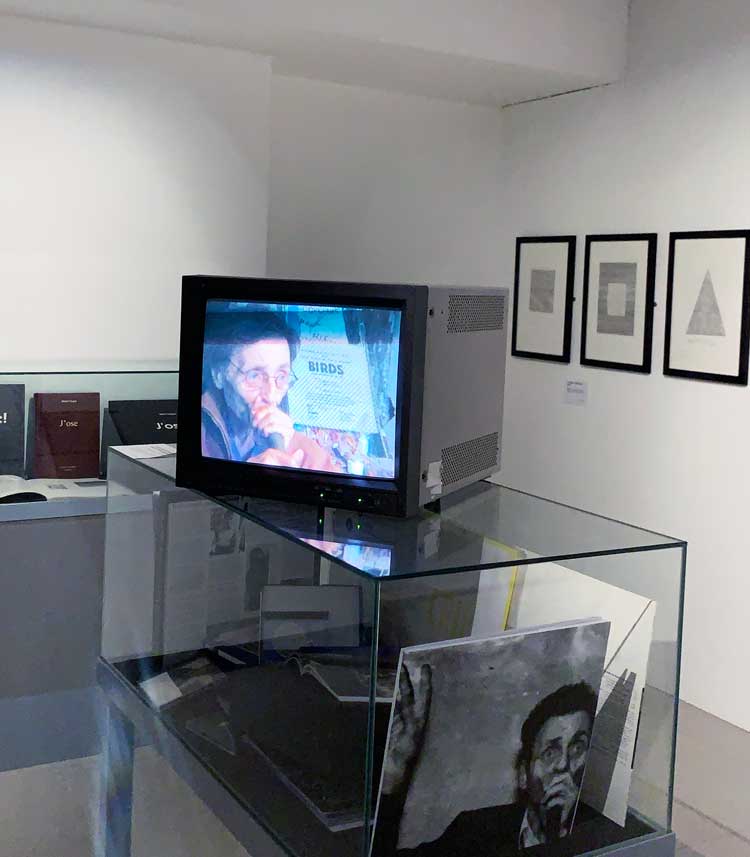 As Hugo Worthy, the Leicester Gallery’s art curator, who has worked closely with Acquaviva in installing the items on display, has commented, Chopin emerges from the exhibition as “a restless presence” who is difficult to define in any singular way or bounded genre. Relatedly, writing in 1994, Chopin referred to his own interest in “limbo states”, a term that we might trace back to experiences during the war-time period, as was noted in an obituary for Chopin, written by Acquaviva, published in 2008, where he alludes to Chopin’s forced participation in a Nazi-driven “death-march” in the months before the end of the second world war. Moreover, Chopin had earlier escaped from a prisoner-of-war camp (in what is now the Czech Republic) and, for a time, found refuge by offering his services as a cook to soldiers in the Red Army. 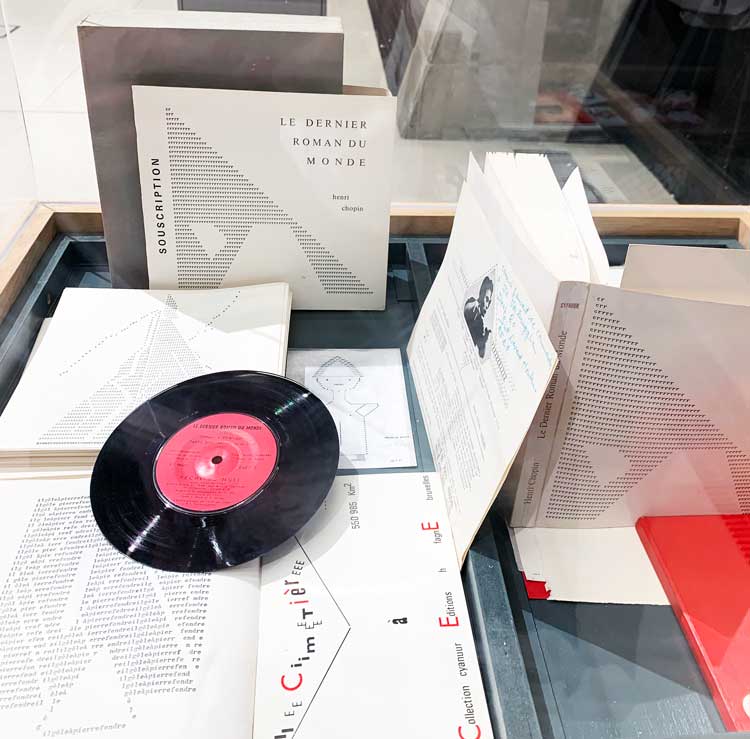 Filling in gaps in other genealogical tracings of Chopin, the early part of this exhibition provides intriguing insights into his progression as a poet and editor from the 50s through to the 60s. Chopin’s first titles in the 50s, tantalisingly enclosed within a vitrine, are slim volumes that Acquaviva describes as holding relatively traditional poems; also on display are little known publications from the late 50s and early 60s where Chopin is named as associated with developments in “lettrism”, though Acquaviva views this as a mere flirtation, noting that Chopin’s embrace of technological possibilities swiftly differentiated him from this grouping. 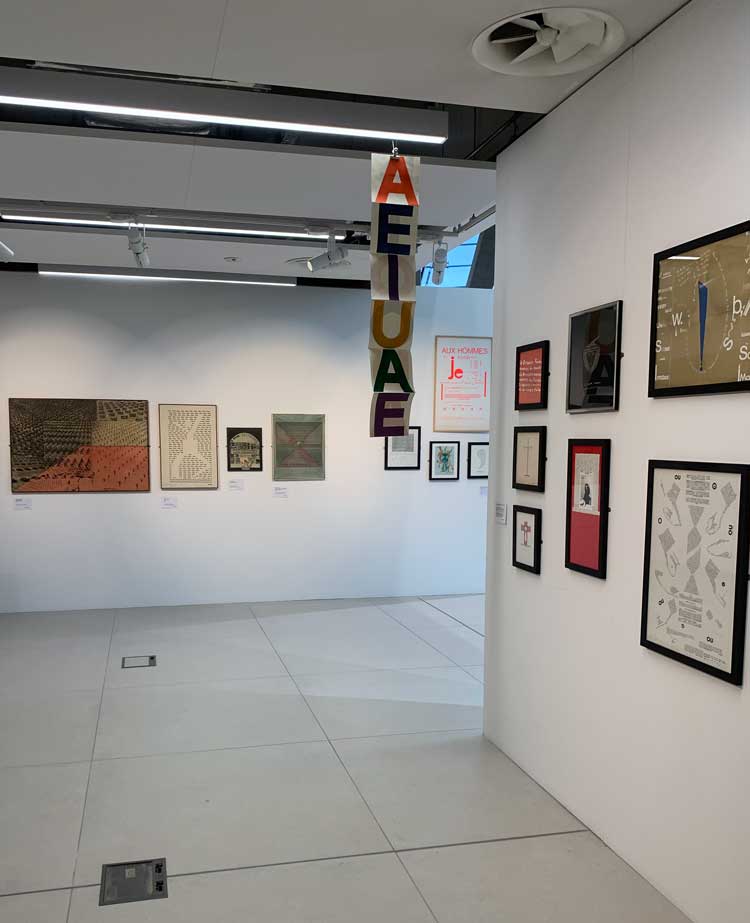 What this curatorially retrospective glance reinforces is that the period from 1964-68 is when Chopin comes into his own, as one of a small group of autonomous actors internationally who use the context of small-scale art publishing to scale the heights of linguistic reinvention: at this time, Chopin’s visual texts reflect a radical turn towards metalinguistic and decompositional processes, in which letters, lines, signs and symbols displace semantic content. This paralleled his interest, as a pioneering postwar sound poet, in newly emerging technologies such as tape-machines and recording techniques that enabled processes of remixing for the first time. What joins these strands together, as Acquaviva’s loose yet sensitised curatorial assemblage brings into new focus, was Chopin’s intensive engagement with the corporality of whatever medium he was using. This included a singular concern for the physicality of language in its deepest sense. Renowned for placing a small microphone down his own throat to capture the unknown sounds of the inner body, Chopin was memorably described by fellow traveller William Burroughs as “an inner space explorer”. The fact that sound – and the voice itself – was fundamental to human nature was a realisation that fed strongly into Chopin’s deeply visceral performative methods, which he connected in pioneering ways from the 50s onwards with electronic recording techniques, the transfer and feedback in between becoming perhaps his distinctive signature and legacy. 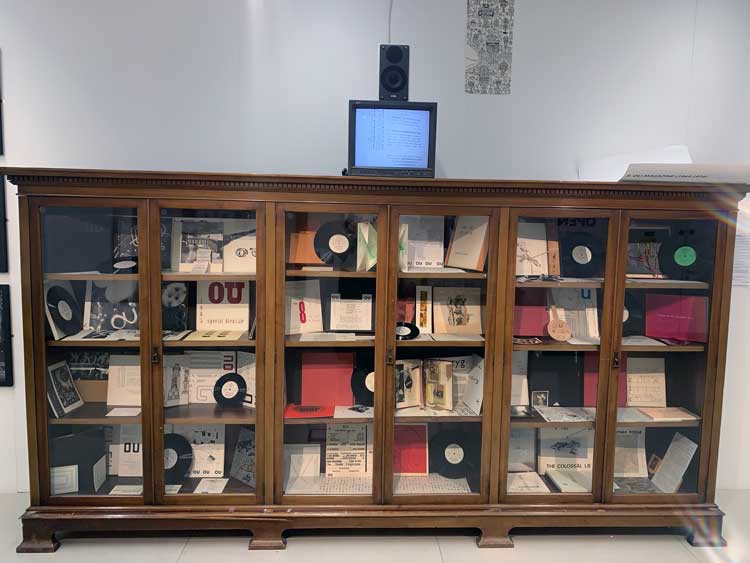 Notably, Burrough’s own visionary title, Electronic Revolution, illustrated by Brion Gysin, was laid out and first published by Chopin in 1971 as part of his Collection OU. The book is installed in the exhibition within a quaint Victorian cupboard, along with a full collection of OU, the audio magazine for which he is best known as a publisher, which he issued on an occasional basis from 1964 until 1974, both in deluxe and standard formats. Other contributors to this included the sound poet Bernard Heidsieck, the sculptor, writer and pioneering dadaist forebear Raoul Hausmann and Gysin, three of whose permutation poems from 1960 were featured in OU’s first issue. Among the British artist-writers included were Ian Hamilton Finlay and Tom Phillips, while some of the most significant kinetic fold-out poems made by John Furnival were also featured; these are among the most colourful works featured in this exhibition, with one of Furnival’s fold-out Vowel Poems hanging from the ceiling to the left of the Victorian cupboard.

One of the most compelling graphic works on display is a rarely seen poster from the ICA’s groundbreaking Between Poetry and Painting exhibition in October 1965, organised by Jasia Reichardt. This event announced the beginning of Chopin’s presence in events in England, which was to become his primary place of residence from 1968 to 1986, then again from 2000 to his death in 2008. In her exhibition and accompanying catalogue, Reichardt contextualised then concurrent developments in concrete poetry within a longer-term lineage of experimentation across typographical and visual boundaries; such an approach was apt for Chopin’s own strong sense at the time of not wanting to be defined by the term “concrete” or, indeed, any other restrictive category.

Despite being included in the growing number of exhibitions and magazines internationally at that time that adopted concrete poetry as a nomenclature, Chopin was creating a work with three lines in French that stated, “Le Dernier Poème concret du monde, Le Dernier monde concret du Poème/Le monde concret du dernier Poème” [the last concrete poem of the world, the last world concrete of the poem/the concrete world of the last poem], (1965). As we see from the display of this text in the exhibition, here Chopin hand-painted the three lines in white paint over a backdrop of a darkly typed alphabetic-related text, that in turn had its origins in an earlier artist’s book by Chopin, entitled Le Dernier Roman du Monde [The Last Novel of the World], begun in 1961, although not published until 1970. This source text can be seen in a vitrine close to the main entrance doors of the gallery. The first in a trilogy of books by Chopin written against dictatorship, it includes a record within its back cover featuring a sound poem from 1957 entitled Pêche du Nuit [Night Fishing].

On the wall opposite “the last concrete poem” is a series of posters for an imaginary festival entitled Fort Boyard, conceptualised initially by Chopin with Gianni Bertini and Serge Béguier in 1967, then extended with other versions. Each poster gave a fictional list of names of those supposedly involved, adding up to an equivalent of several Isle of Wight festivals except for experimental poetry. Oh, that it had actually happened! In displaying the full set of these posters, which are rarely seen together, Acquaviva reveals the importance of graphic works in printed formats in documenting a period of shifting, decentred, chaotic linguistic emergence in which Chopin was integrally embedded. 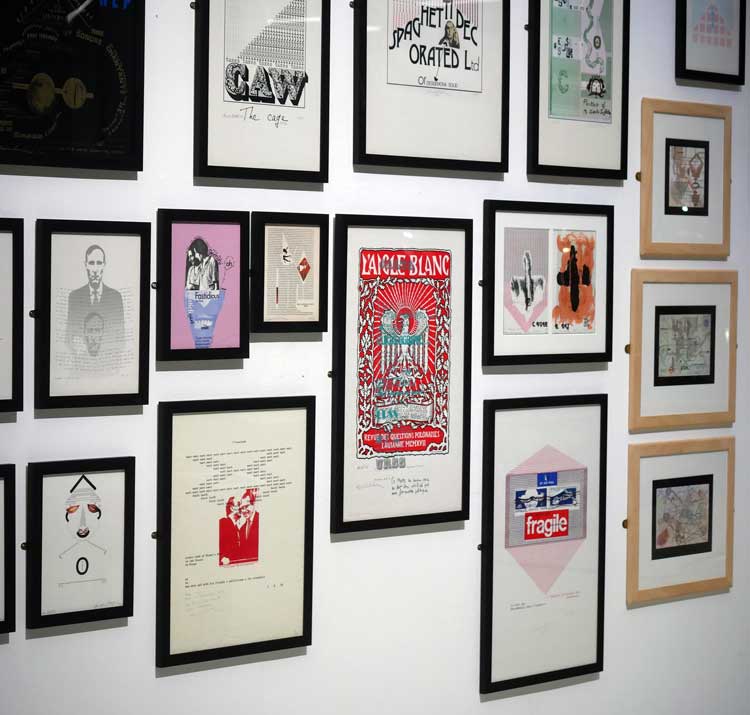 To the left in the opening gallery are also a series of posters, relating primarily to the period from 1968 in which Chopin lived in Essex with his English-born wife, Jean, whose death in 1985 prompted Chopin’s return a year later to Paris, where he stayed until 1999. What becomes clear from this section of the exhibition and on the accompanying walls to the right, is that aspects of a British visual iconography are added to the underlying metalinguistic textures honed by Chopin over the previous two decades. This results in works that depict for example, the London tube map or make visual reference to the letters BBC. We see also posters relating to a solo exhibition that Chopin had in 1974 at the Whitechapel Gallery in London, as well as from the seminal Sound & Syntax International Festival of Sound Poetry in Glasgow in 1978, documentation of which, including Bob Cobbing’s introduction to a virtuoso performance by Chopin, can be viewed on Vimeo. 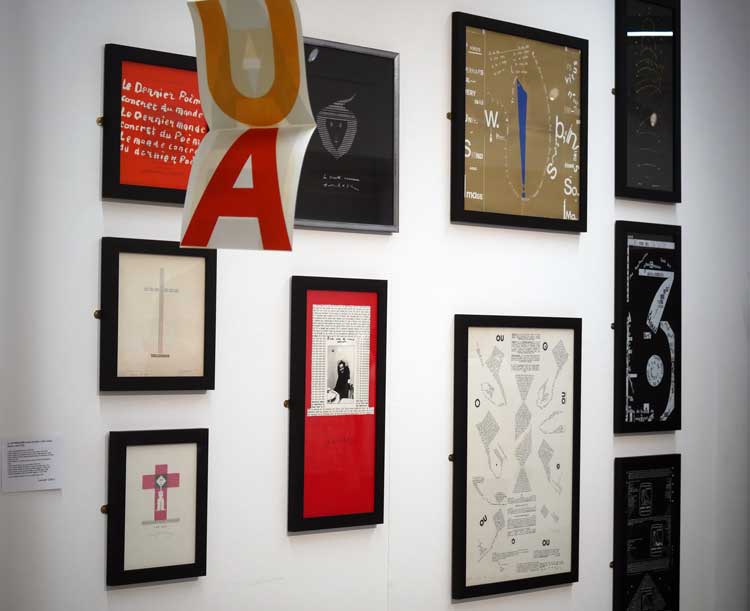 A video recording of Chopin performing live in Paris in 2007 (in an event organised in his honour by Acquaviva) is also one of the highlights of this exhibition. For those of us who never had the chance to experience Chopin live in performance, the video (also attributed to Acquaviva) communicates the technical alacrity of Chopin, as a consummate master of manipulating voice and tape machines in coeval, recursively iterative processes, creating sonic energies that appear to loop before one’s eyes, and to reverberate aurally for days after first listening. Experiencing the intensity of what Chopin was doing with sound during these digitally nullified times is to recognise a physical relationship to language that has the shock effect of the screaming of Artaud, or of early futurist events. The soundtrack from this installation, on a loop within an anteroom surrounded by some of Chopin’s later works in print formats, becomes an ambient backdrop to circulation around the broader exhibition, as if a phantasmal underlay inflecting reading of graphic and visual surfaces. 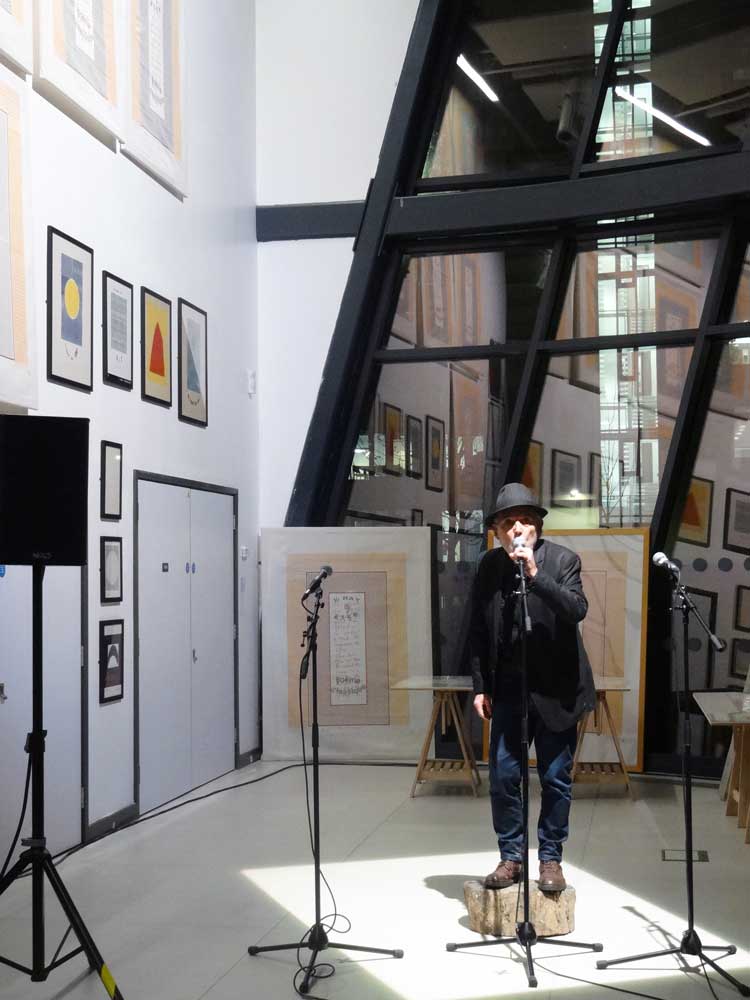 A sense of a phenomenological haunting, meanwhile, pervades the sound performance given on the opening night of the exhibition by an artist friend of Chopin’s, Joël Hubaut, who had travelled that day from northern France to Leicester. Availing himself of the three microphones stretched across the breadth of the first gallery space, Hubaut gave a live vocal performance using elongated and shortened delays and extended reverberations that was mixed with a prerecorded tape that used a similar process, but with different temporalities. The overall effect was mesmeric, building to a point of intensive climax, followed by a moment of privileged silence, during which I register that Hubaut had been conjuring up the word “Chopin” through multiple iterations and over-layering.

When Acquaviva first encountered Chopin in Paris in the late 90s, he found (by his own account) someone who felt isolated and ignored by the French cultural establishment, with his many pioneering ventures overlooked or simply forgotten. While subsequent exhibitions have gone some way to redress this neglect, Acquaviva’s reassembling of scattered and dispersed material remnants of the full breadth of Chopin’s prolific and ground-breaking series of practices begins for the first time, it seems to me, to challenge the limited perception of what he was doing. That it is time to reclaim Chopin’s pioneering place in a yet-to-be fully written history of overlap between analogue media and a digital electronic revolution (and the mutual infusion of these tendencies as embodied in a figure such as Chopin) is strongly underscored by what is here presented, making this an exhibition that works on multiple levels, just like the man himself. 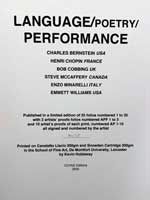 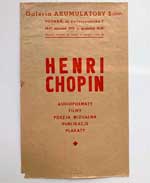 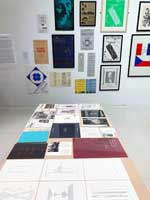