This exhibition is a provocative, disturbing, poignant and ultimately telling exploration of the implications and complications arising from technology’s advancing role in human evolution 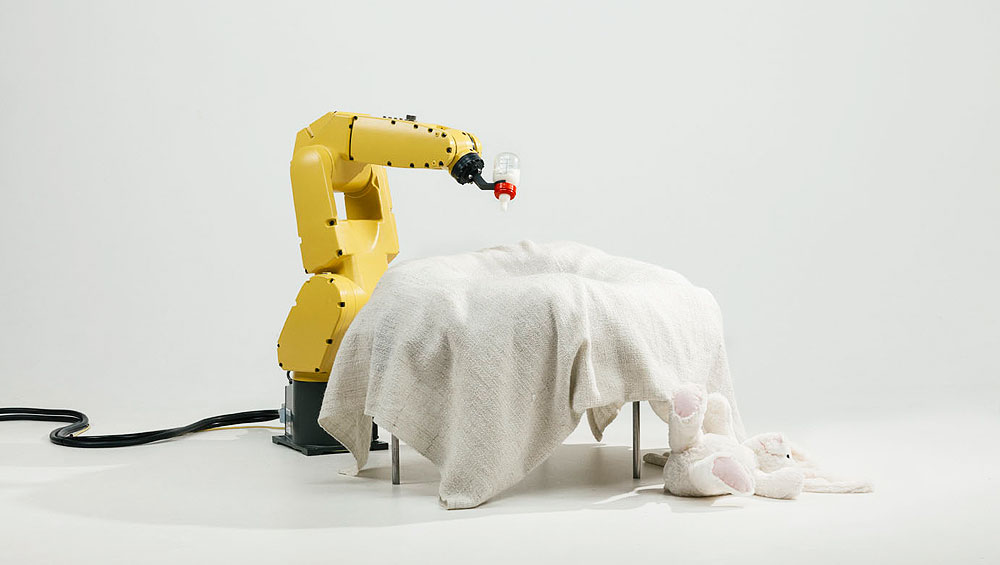 The exhibition at the Vitra Design Museum has attracted record numbers since it opened last month. No doubt, visitors imagine that here lies a smörgåsbord of cyber-beings, spooky synthetics and spectacular automata. But this is not, let’s be clear, a celebration of robots. It is an exploration of human nature, and what our relationship with machines reveals about us.

It does, however, offer more than 200 choice specimens of some of the world’s most iconic, revolutionary and sophisticated pieces of machinery, speculative design, art, film and graphic imagery within the field. This ranges from arguably the world’s most famous and loved robot, Star Wars’ R2-D2, through friendly robotic “creatures” that are currently calming and amusing people with dementia in Japanese care homes.

This selection has been pulled together by a collaborative, multidisciplinary team lead by Vitra Design Museum curator Amelie Klein and her counterparts at the MAK (the Austrian Museum of Applied Arts) in Vienna and the Design Museum, Gent. Their combined curatorial expertise across design, art and technology has been enriched by multiple international advisers, including American science fiction author Bruce Sterling; Carlo Ratti, director of MIT’s Senseable City Laboratory; German interaction designer Gesche Joost, and the UK’s Anthony Dunne and Fiona Raby (Dunne & Raby), founders and former leaders of the Royal College of Art’s pioneering design interactions MA and now professors of design and emerging technology at New York’s New School (Parsons School of Design).

Occupying the whole of the curvaceous standalone gallery, a 1989 building by Frank Gehry – his first building in Europe - the exhibition takes us on a four-part journey. In each section, a series of questions is proffered, illuminated and suspended from the ceiling. The idea, says Klein, is to try to prod visitors into engaging with the complex arguments around whether technology is good or bad.

“Have you ever met a robot?” we are asked, as we enter the black-walled introductory space. We certainly have in our imaginations, as this area reveals. Styled like an ethnographic display within a natural history museum, here is the last 100 years’ worth of what we thought robots could or should be, with characters that have become popular through literature, comics, films and TV, revealing how very pervasive and strangely consistent our ill-formed notions of a machine-assisted future has been. There are posters for Blade Runner, The Matrix, The Terminator, Forbidden Planet; stills from the 1960s American cartoon The Jetsons, and a more recent movie, I Robot – all of which reflect the age-old myth of robots as a humanoid thing on two legs that is either a good robot (helper) or a bad robot (evil genius and destroyer of mankind).

The multiple-layering of media, graphics, physical pieces and film in the displays works well to keep viewers of all ages interested, while the art as well as the speculative/critical design pieces are really nicely chosen and paced to keep challenging our assumptions. They also heighten the feelings of ambivalence and unease - the dominant emotions provoked by this exhibition.

Under the question, “Do we really need robots?” are three eerie photographs from Eric Pickersgill’s Removed series (people engaging with their smartphones in everyday settings, but with the smartphones taken away). Nearby is another trio by French photographer Yves Gellie, whose Human Version (2008-9) series saw him visiting the leading robotic research labs around the world to capture their uncanny activities and outputs. Even German tech-rock exponents Kraftwerk’s The Robots video, from 1978, has been exhumed. The UK’s Superflux collective, superstars of critical design, provide their own disquieting meditation on the question “Are robots our friends or our enemies?”, which dangles over their Uninvited Guests film (2015). Its premise is that a frail, 70-year-old man is provided with “smart tools” by his adult children, including a walking stick that encourages / monitors his movements and other gadgets that log his sleep and eating habits. After one day of co-operating with them, he rebels and ignores them and their insistent nagging, only to find they have alerted his children and triggered another wave of panicked communication and pestering.

It is really these grey areas that the curatorial team wanted to inhabit, says Klein, because the usual dialogue seems so polarised. “Design is always at the edge, between concepts or ideas that don’t seem to go well together, like humans and machines, or humans and biology or technology. Wherever you have an overlap or a gap, this is where design bridges ideas and concepts that seem unbridgeable.”

This dark, content-rich Cabinet of Curiosities then segues into a clean, white industrial space, focusing on the world of work. “Could a robot do your job?” we are asked, while an orange industrial robot that speaks three languages is busy handwriting its robotic “manifesto” – though grammatically correct and rich in vocabulary, the sentences are meaningless (Robotlab, Manifest, 2008). This is neatly juxtaposed with Edward Burtynsky’s large photographs depicting workers in a 450-sq-metre factory in Cancun, performing almost identical tasks, wearing identical yellow uniforms, all engaged in assembling the same coffee machines. “Does it make sense for humans to do that work?” asks Klein. “Does it make sense for an industrial robot to make manifestos?”

On the adjacent wall is a huge work by American artist Shawn Maximo, called Going Green (2016), showing solar-powered robots in a production hall with no humans, but a few scattered signs of human life – an inflatable lilo, a camping chair. In this scenario, says Klein: “Maybe people don’t work at all, they go camping or sit by the pool; or maybe they are super-poor and squat in the production hall.” She says: “The fear of loss of employment is as old as the industrial revolution. It could turn out evil and deadly or it could turn out to be OK, like the third industrial revolution, from the 1950s to the 80s, which brought the automation of the car industry, and of the office with the PC.” Klein points to a wall display of 1980s newspaper clippings, which predicted massive unemployment – up to 100 million over 40 years - because of the computer. “Luckily, that didn’t happen,” she says.

“Do you want to become a producer yourself” is another illuminated question, hovering over a display of 3D printed chairs, a nod to the world of open-source design that allegedly awaits us, when everyone with access to a 3D printer can make pretty much anything themselves. Opposite, a two-armed robot is patiently picking up a shiny ball between its pincers, lifting it and rolling it down a chute. This “collaborative robot” is called YuMi (2015) and has been loaned by German state-of-the-art robotics manufacturer ABB. Unlike most industrial robots, which are too powerful to work alongside people, this one is sophisticated enough to sit beside you at your desk and learn from you.

At the far end of this space is a wall graphic showing the MX3D Bridge by Dutch designer Joris Laarman, a bridge that he has printed robotically in steel to cross a canal in Amsterdam: a breakthrough in the world of architecture and construction.

With the next section, a gallery whose walls are tinted a friendly plastic pink, we enter an even more ambiguous world, of robots designed to connect emotionally with their human counterparts. Here, we have a robotic “nanny” arm poised over a crib, waiting to feed a non-existent baby its milk (Stephan Bogner, Philipp Schmitt and Jonas Voigt’s Raising Robotic Natives). This is not a commercial proposition. However, therapy robot Paro (Takanori Shibata, 2001) is: a baby seal-shaped, fluffy toy that whimpers, has huge eyes and responds to cuddles, it is already being used in Japanese dementia care homes to calm residents. And the Frebble (Holland Haptics, 2014) apparently soon will be commercially available – this cute, plastic, hand-held device respond to gestures via wifi, so that, for example, a parent wanting to squeeze their child’s hand while Skyping from thousands of miles away can generate a squeeze in the Frebble their child is holding.

Our natural tendency, these exhibits show, is to try to form relationships, even with machines. But machines don’t always make it easy. Dunne & Raby’s 2007 film Technological Dream Series: No 1, Robots shows a woman trying to interact with various, not exactly user-friendly pieces of speculative kit, including a needy but immobile computer that demands to be wheeled around, like a pet. And when we do form relationships with machines, there are emotional consequences. Sony’s now defunct robot dog Aibo is present, on a podium. Sony stopped production in 2006, and maintenance in 2013. Nearby, is a speculative photographic work, a fictional funeral in Japan where dead Aibo pets are mourned by their owners.

Having gone through the first three parts of the narrative – introduction, industry and friendship – we move upstairs to the fourth and final space to explore how close we are to the point of “singularity” – where we become one with the robot, either via prosthesis or implants, or through inhabiting robotic architecture. Here, we have an array of tech that is already available: an exoskeleton (developed by the military, it can also be used to help a paraplegic person walk); a prosthetic arm that can be activated by neural impulses; a robot that is designed to work with autistic children, to help kids relate to their parents and educators; and an implant that we can inject into ourselves to help with tracking or monitoring, just as we already do with our pets.

The rest is speculative, including Philip Beesley’s Hylozoic Grove (2016), stalactites of translucent, feathery fronds (made of acrylic, Mylar, borosilicate glass and memory-shape alloy) that use motion-tracking and touch sensors to react to the movements of passersby. It is here, where the works are closer to fantasy than reality, that the exhibition’s grip on its audience diminishes. Why would we want to wear Anouk Wipprecht’s menacing but beautiful Spider Dress 2.0 (2015), a 3D-printed robotic dress that helps to mark the wearer’s personal space, or Francis Bitonti Studio’s rainbow-hued but deeply uncomfortable-looking 3D-printed Molecule Shoes (2015)?

But just as you exit the building, breathing a sigh of relief at what yet hasn’t been commissioned (while deeply troubled by what may be lurking just around the corner), a tablet device placed at the top of the stairs delivers one last sucker punch: displaying the Architecture of Radio app, by Richard Vijgen (2015), it reveals a 360-degree visualisation of the dense system of data cables, radio signals, cell towers and satellites that are present in the building. Klein says: “This is what we want people to realise: you are already in a robotic system at all times of the day.”

While expertly conjuring past, present and possible future technological realities, the exhibition doesn’t address – though it is explored in two of the documentaries, a couple of exhibits, and in the excellent and comprehensive catalogue – the most worrying question of all: who is controlling all the data that is already being transmitted and harvested by the machinery we use and inhabit? And to what end? Klein summarises: “Behind the code there is the human. And behind the human is a corporation. Technology is always a mirror of society and always reflecting the ideology behind the technology.” 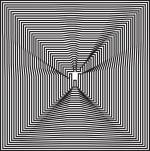 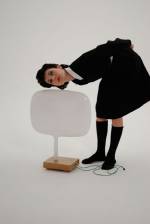 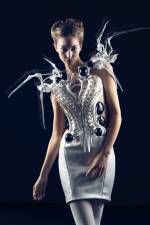 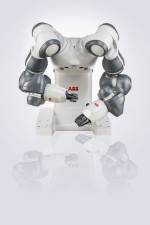 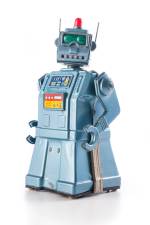