Hans Ulrich Obrist – interview: ‘This is an unusual Calder show because it is about ideas. We see him in a new light’

Hans Ulrich Obrist – interview: ‘This is an unusual Calder show because it is about ideas. We see him in a new light’

A major Alexander Calder exhibition at Centro Botín in Santander reveals about 80 of the great American artist’s unrealised projects. Hans Ulrich Obrist, curator of the show, discusses these little-known collaborative works, which highlight Calder’s interest in the world around him

Alexander Calder (1898-1976) changed the course of modern art with his mobile sculptures. At the beginning of the 1930s, he developed a method of making sculpture that involved creating abstract forms in wire that were suspended in the air. The artist viewed his methods of shaping wire as “drawing” within a physical space. Calder’s sculptures initially moved in their environment through a system of motors, although the mechanical elements were later taken away so that the mobiles were prompted to move by human interaction and air currents.

Apart from working on these creations, the artist spent a lot of his time on large-scale outdoor sculptures. Calder carried out major commissions, including projects for the New York Port Authority at John F Kennedy airport, Unesco in Paris, the Olympic Games in Mexico City and the General Services Administration in Chicago.

Calder Stories, a major exhibition at Centro Botín in Santander that covers five decades of the sculptor’s career, turns the spotlight on the projects that didn’t make it – unrealised public art proposals that often saw Calder collaborating with leading architects, as well as choreographers and composers. These lesser-known enterprises, many of which have not been seen in public until now, include those with the New York-based architects Wallace K Harrison and Percival Goodman, his longstanding collaborators. Standouts among the unbuilt projects include a series of sculptures intended for a new habitat at the Bronx zoo in New York and drawings relating to Calder’s “ballet objects” – including set designs for a proposed ballet with music by Harrison Kerr – which are brought to life in specially commissioned digital animations. Calder had been invited to produce a fountain for the pool in front of the Consolidated Edison pavilion at the 1939 New York World’s Fair that would consist of a performance of jets of water, akin to “the movements of living dancers”. The jets were installed at the pavilion, although the ballet was ultimately never executed. 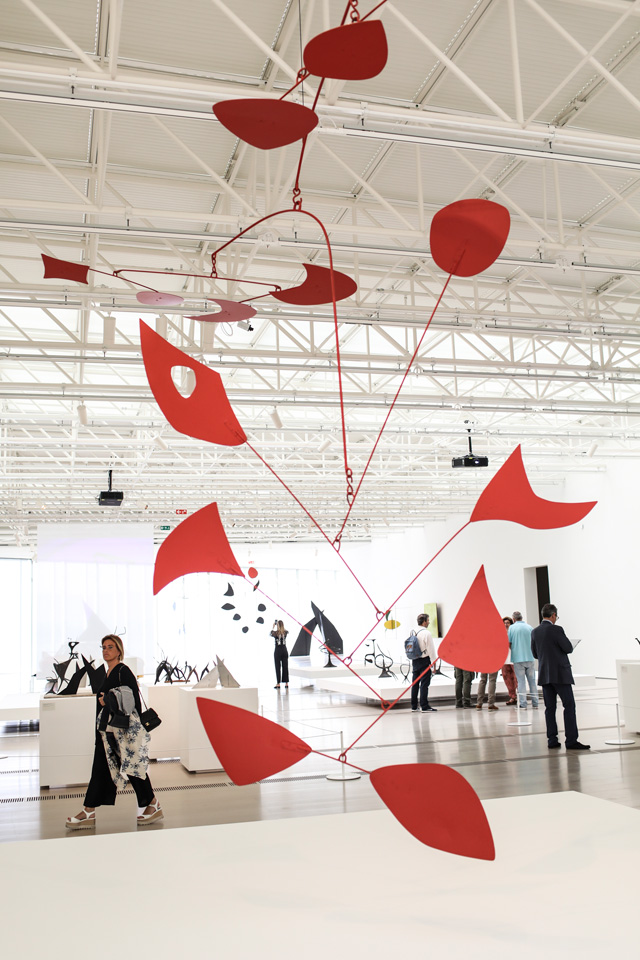 The exhibition gives audiences an understanding of Calder’s working life in the US (he was based in Roxbury, Connecticut), but also presents a picture of his international connections. He had spent a few years in Paris at the end of the 1920s, befriending Fernand Léger, Jean Arp, Piet Mondrian and Marcel Duchamp, but the 1950s marked a prolific period of international commissions. In 1954, he travelled to Beirut to make a work for Middle East Airlines’ central office. During this trip, he also made mobiles for his friends in the city, with whom he was staying, as well as one for the home of the architect Assem Salam, who had commissioned the project. The following year, Calder travelled to India at the invitation of the architect Gira Sarabhai, who had offered an extensive tour of the country in exchange for works of art. Soon after this trip, Calder went to Venezuela to embark on another commission.

Hans Ulrich Obrist, the curator of Calder Stories and the long-time artistic director at the Serpentine Galleries in London, has, since 1990, been researching the topic of unrealised projects by contemporary artists. This work led to the publication of Unbuilt Roads in 1997 and Dreams in 1999. Obrist also co-founded the Agency of Unrealised Projects, a collaborative project with the Serpentine Galleries and e-flux.

Allie Biswas: The exhibition highlights the commercial aspect of Calder’s work. He was receiving commissions and working all around the world.

Hans Ulrich Obrist: We can see globalisation in the show, particularly in the 1950s and 60s, but it is not a homogenising form of globalisation. Édouard Glissant, my great hero, pointed out earlier on that when the world faces homogenisation, differences disappear, species disappear and ecological disaster grows out of that. It is not the first time that we have experienced globalisation, but it is the most extreme kind, fuelled by technology, and it is destroying the planet. Glissant said that we need to resist this kind of globalisation. But he also said that he envisaged a moment when there would be new forms of nationalism, new forms of racism, new forms of intolerance, which we can, of course, observe now in many countries in the world. He said that we must vehemently resist these things as well, through mondialité – a global dialogue that is respectful of difference, which listens to the planet, which listens to all the species. It was a very interesting experience to work on this show with the Calder Estate – we realised that Calder understood very intuitively this type of mondialité. When he went to India, he wouldn’t send crates over with his artworks; he would go to India without even taking luggage. He would arrive, he would find his inspiration, he would locate his materials. He had his international language, and I find it interesting that he worked with so many architects from the international movement who had a rather homogenising idea of putting the same kind of modernism everywhere. That’s not what Calder did. We wanted to point that out in the show. That was very important for me. 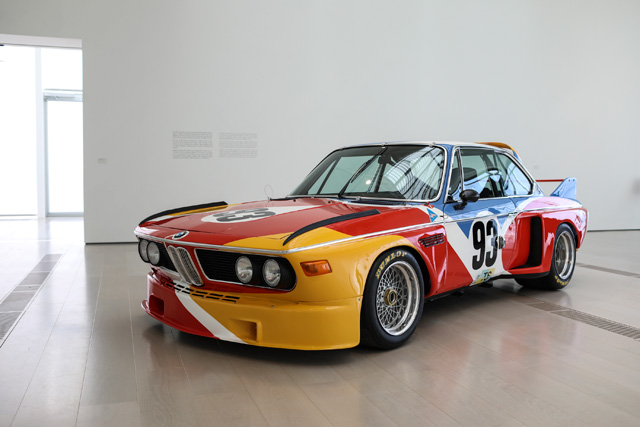 AB: The show draws attention to these little-known moments that most people don’t know about. Which of these projects particularly excited you?

HUO: This is an unusual Calder show because it is about ideas. We see him in a new light. I always knew about the car (in 1975, the French auctioneer and racing driver Hervé Poulain invited Calder to paint a design for the first in the now-famous series of BMW Art Cars) and also the plane (the American airline Braniff asked Calder to paint one of its aircraft in 1973). These goes beyond the circuit of art – they bring art to life. For me, the car and the plane are fascinating because Calder really wanted to reach other audiences; he wanted to bring art to the world. But there were a lot of projects that I didn’t know about, which was, of course, the purpose of this operation, for myself, and hopefully for all the viewers of the show. We all make discoveries in the exhibition. I think, particularly when you are curating a show on an artist as famous artist as Calder, where everything seems to have been done, we needed an unexpected, fresh new view. Through the bronzes and maquettes on display, which we always considered to be domestic objects, the exhibition allows us to understand that these were in honour of large-scale, monumental projects. 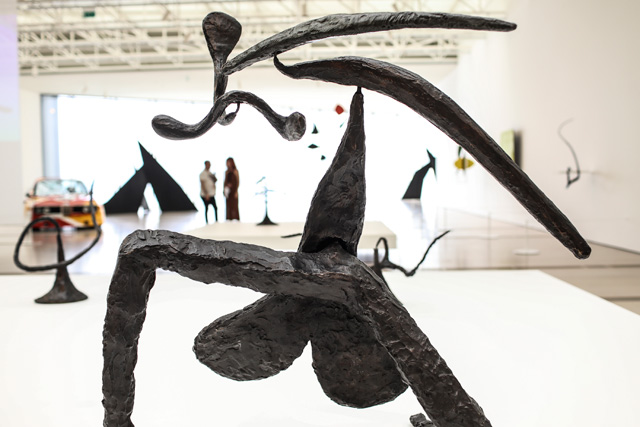 HUO: He certainly had this desire to reach out into the world. He wasn’t satisfied with the circuit of galleries, museums and biennales. He clearly wanted to somehow have a wider outreach with his work. Of course, one of the ways to do this is through public art. Calder didn’t make this his main occupation because he was a studio artist, but he had a desire to do it and he did it frequently. He came up with concrete projects for the most part rather than utopian projects; all of those in the exhibition could, in theory, have happened. They’re not impossible. I don’t think that he was in that sense traumatised about his projects not being realised because he was quite pragmatic. He would often use the potential of an unrealised project, putting it into his next idea. He would shift it or transport it. There weren’t regrets, I don’t think. He would move ahead; he was in a positive spiral. Also, it wasn’t as if the majority of his projects were not realised. He was very successful during his lifetime and got a lot built. 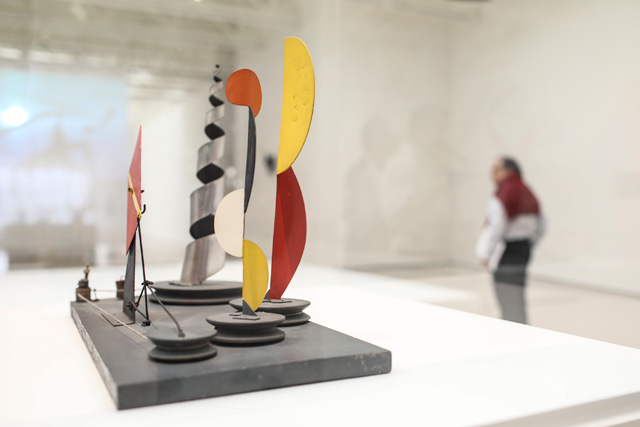 AB: What about his relationship with other artists? He would often be in competition with his peers who were bidding on the same commission.

HUO: From what we have figured out from researching the exhibition, he had a very collegial approach to artists. He had many great relationships with artists of his generation, sharing and swapping works. Also, he mentored younger artists. He was informed by friendship. It’s very different in the architectural world because architects are systematically competing with each other, they are exposed to that mechanism every time they participate in a project, putting forward their proposal. In the art world, that doesn’t happen as much. That said, I’m sure Calder would have often felt huge regret when a project didn’t come to fruition. 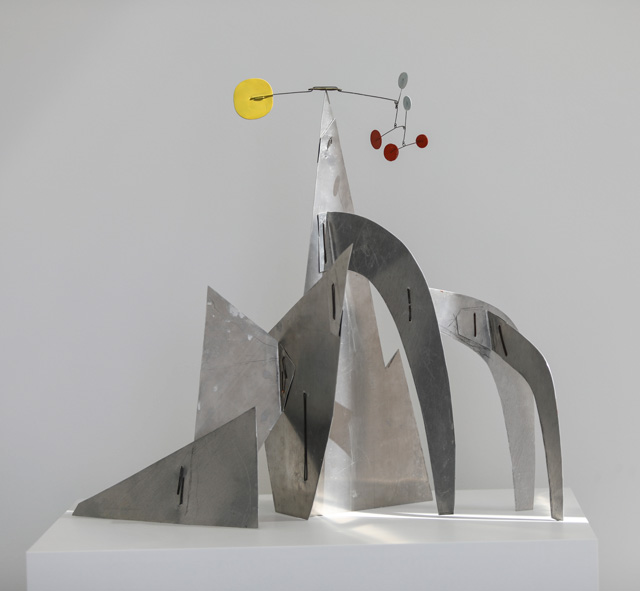 AB: Calder’s work is often described in terms of its architectural qualities, and the exhibition reveals his close working relationships with architects. Do you think that Calder considered himself to be an architect in certain ways?

HUO: Sometimes artists have ideas for unrealised buildings. In my research, I have come across many artists who have thought about designing houses, for example. Then there are artists who actually make buildings. I did not encounter any such projects by Calder. But the way that he dealt with space and form was very inspiring, and he would inspire artists and architects equally. Calder’s art became architecture through him inspiring architects – I think that’s the answer.

• Calder Stories, curated by Hans Ulrich Obrist, is on display at Centro Botín, Santander, until 3 November 2019. 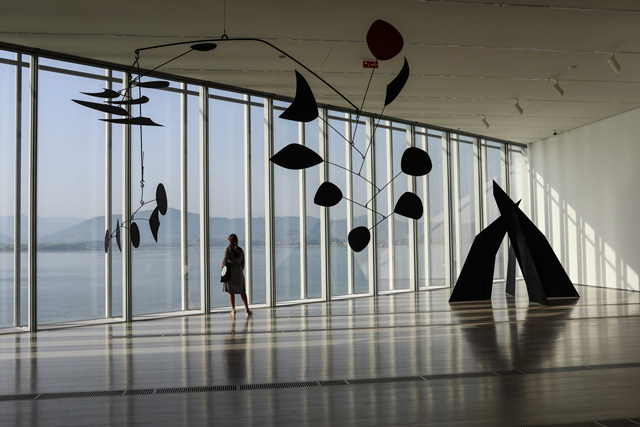