A concise exhibition at Bastian captures the German-American painter manoeuvring between modernisms, endlessly experimenting in his attempt to marry the expressive with the pictorial 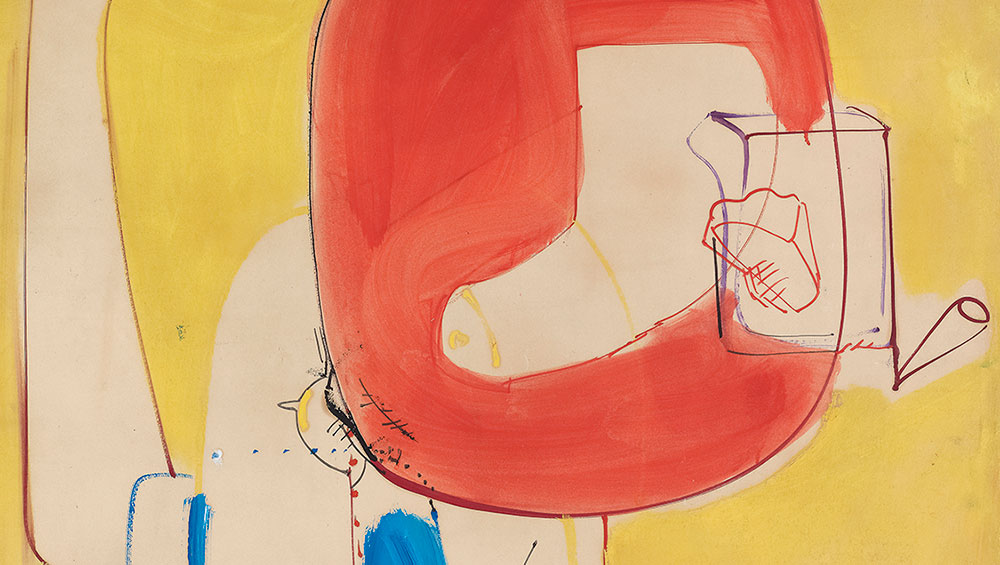 In 1944, the German-born American painter and draughtsman Hans Hofmann (1880-1966) had his first New York solo exhibition, at Peggy Guggenheim’s Art of This Century gallery in New York. He was 64. Although a practising artist his entire adult life – and one who, as a young man, had been enmeshed in the same Parisian scene as Georges Braque, Robert and Sonia Delaunay and Pablo Picasso – Hofmann’s moment had been slow in arriving. When it came, Clement Greenberg, the leading hierophant of abstract expressionism, hailed it as a pivotal moment in the genesis of a new American phase in the history of painting.

For the remaining two decades of his life, Hofmann was a prominent figure in the abstract expressionist firmament, with major retrospectives at the Whitney in 1957 and the Museum of Modern Art in New York in 1963. His late “slab” paintings, especially those of his final three years, reached ever-greater heights of incandescence. Yet, in the popular imagination at least, Hofmann has never quite belonged to the front row of abstract expressionists. There are two incontestable reasons for this. The first is his parallel career as the era’s most-acclaimed art educator, teaching Helen Frankenthaler, Ray Eames, Louise Nevelson, Lee Krasner, Allan Kaprow and dozens more at his schools in New York and Provincetown. His reputation as an instructor long remained such that his painting came second. 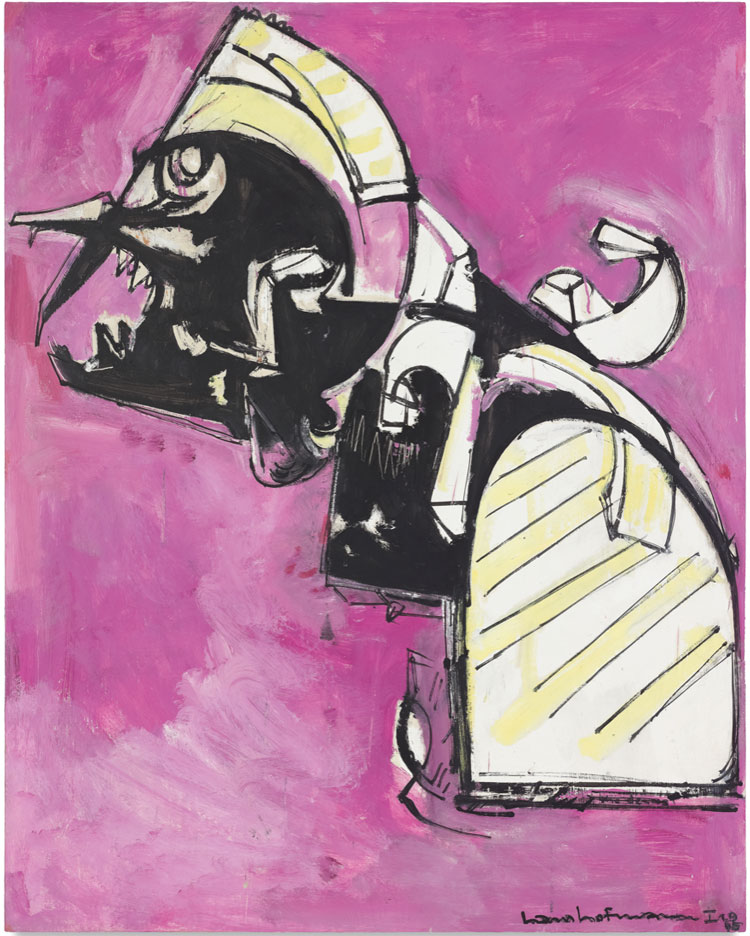 The other reason is on full display at Fury: Painting After the War, Bastian Gallery’s concise exhibition of works executed in the mid-to-late 1940s. Until his late apotheosis, Hofmann was consistently inconsistent. “The variety of manners and even of styles in which [Hofmann] works,” wrote Greenberg in a 1961 monograph, “would conspire to deprive even the most sympathetic public of a clear idea of his achievement.”

Cast your eyes around Bastian’s airy London premises, and it is easy to see what Greenberg meant. These pieces might have come from a handful of different painters. The titular work Fury: No 1 (1945) shows a black, white and yellow being, both insectoid and mechanoid, atop a billowy purple background. Perceiving it alone, you might place Hofmann in the lineage of Jacob Epstein’s Rock Drill (1913) and Otto Dix’s The War (1924), a despairing reaction to the horrors of technology, war and the 20th century. 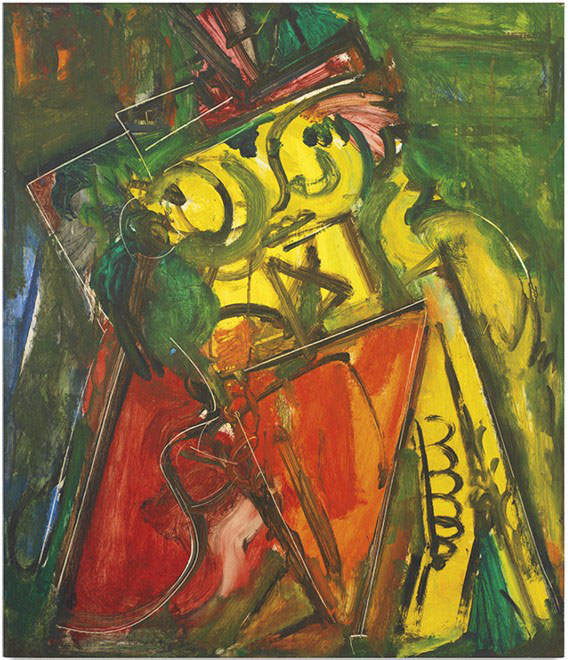 Swivel round, though, and you will see [Untitled] Landscape No 49 (1942), a loose, dramatic take on cubism where the fragmented scene is not even vaguely recognisable amid the luscious swoops of paint. You will also see Goldregen (1944), where colourful splotches of paint peek out from a field of black, as if glimmering gems awaiting to be discovered. Head downstairs to the gallery’s basement, meanwhile, and the stained glass-esque fragments that make up The Blande Interior (1949) hang opposite the Joan Miró-ish motifs of White Expansion (1954) (the latter is a later outlier not included in the main exhibition).

Hofmann’s heterogeneity reflects a life spent learning the lessons of various modernisms. Even after moving into an explicitly abstract mode, cubism stood at the core of his style. With the cubists, he had absorbed Paul Cézanne’s flatness and concern with the picture plane; many of his earlier landscapes owe a clear debt to that quiet revolutionary’s interlocking volumes. Hofmann’s thinly spread paint and interest in sheer surface echoes that of Matisse, while his vivid coloration reflected both that of the fauvists and his friends the Delaunays. Although cut off from many of his European compatriots after emigrating to the US in 1932, Hofmann continued to absorb their influences, serving as bridge between Montmartre and Greenwich Village. On the evidence of the paintings at Bastian, these influences constantly jostled for prominence. 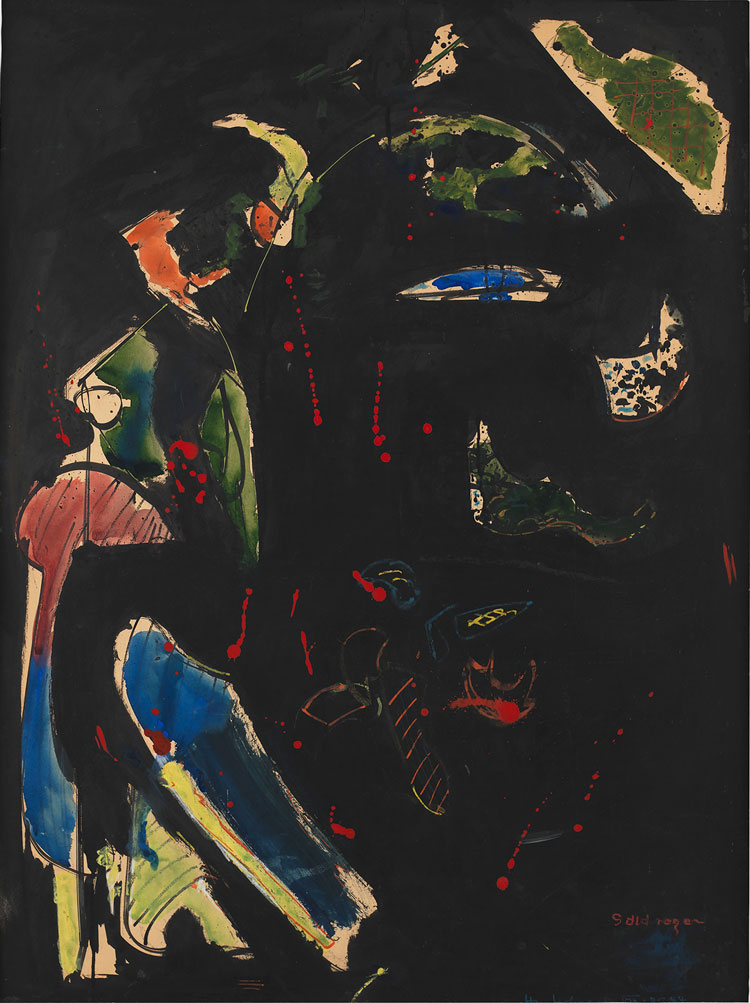 It was not the only kind of jostling happening on Hofmann’s canvases. He used the phrase “push and pull” to describe the concurrent operation of flatness and depth in his paintings. “Only from the varied counterplay of push and pull,” he would say in a 1951 artistic statement, “and from its variation in intensities, will plastic creation result.” The seeds of this idea were present by the late 40s. The eruptions of colour in Goldregen and Rendezvouz (1944) happen on a slick mat layer. The Virgin (1946), one of Hofmann’s final works with a clearly figurative subject, appears equally to be about to leap out of the canvas and sealed flat within it. Richly textured dabs and smears of royal blue are painterly, but of the same even level as the lightly applied yellow that surrounds them.

Although “push and pull” was the most important, numerous other oppositions enliven Hofmann’s work. Some are them occur in his subject matter. Take a look again at Fury: the figure rages, but it does so with control, as if stuck in a perpetual enactment of anger rather than an emotional flare-up. Its precise rendering contrasts with its apparent howl. The paintings at Bastian also set up an opposition between a vivid brightness and a penumbral gloom; Fear (1946), for instance, contrasts black, white and a burning red. This painting also demonstrates the final tug between cubism and the complete abstraction that Hofmann would soon embrace. The red might represent a clawed figure reaching out into the darkness around – squint and it could resemble a fragment from Picasso’s Guernica (1937) – but it could also be a non-representational form on a field. 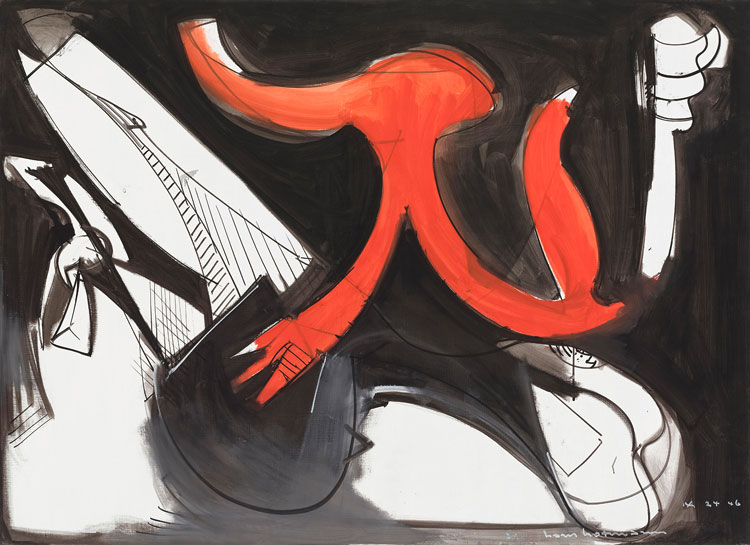 These conflicting forces in Hofmann’s work, of course, were played out against the background of the biggest conflict of all. Although he had lived wholly or partially in the US for almost a decade by the time war in Europe broke out, Hofmann seems to have been keenly affected by the crises precipitated by his native country. Its presence most obviously marks Fear and Fury, with their discordance and anger. Goldregen’s smog could be both painterly and metaphorical darkness, bearing down on to the laburnums of his Bavarian childhood. The mania of [Untitled] Landscape No 49 becomes even more acute when viewed through this lens: it is a paradise lost, a world rendered anxious and uncertain.

These storms, for Hofmann, would soon pass; his late oeuvre might be the most joyous of all that associated with abstract expressionism, slabs of fauvist colour dissolving and tessellating. Fury: Painting After the War shows that such exuberance was not earned without a struggle. 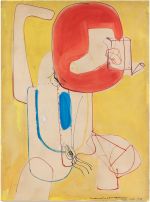