Artists have only one life - yet Gerald Laing seems to have nine. During one of Laing's previous incarnations, this reviewer met him up in New York State on the tip of Amagansett, in a summerhouse he had rented for winter. This was in the 1970s. He was already working on a series of sculptures, in a challenging mode. The wild Atlantic, the beach and the dunes made Hopper's environment seem benign.

Laing has never been able to resist a challenge. Versatility opens the way to ingenuity and Laing has both qualities in spades. When I later visited him at Kinkell Castle, the medieval home in Scotland he painstakingly restored in the mid-1970s, his sculptures had already grown substantially. Earlier, the major piece 'Division' grew until it appeared on site at Cleish, near Edinburgh - all five metres wide of it. It began at Kinkell as a superb shade of yellow; wild Michaelmas Daisies then sprang up just beside it. It seemed like a gesture from nature.

Now Gerald Laing's exhibition in Edinburgh focuses in part on the Iraq war. Laing is not currently an official war artist - although Iraq has produced a few - but he should be. His perceptive, considered range of scepticism merges with his sense of contrasting colour to pick at the raw nerves that most artists half his age have felt unable to expose.

'Are we all Republicans now? Aw Shucks', parodies Dubya dramatically. Another large painting, 'Only one of them uses Colgate', mocks effectively the confrontation of Western consumerist dreams set against Iraqi debasement. The corruption and moral collapse of the great American dream as a result of current policies indicates how insidious and continuous has been our descent into sloth. Laing's own brand, blending cynical critique with a formal clarity of image and line, stands out for the courage of his longheld convictions.

As Christopher Finch wrote in his 1968 appraisal:

Gerald Laing, in his pictures of skydivers, dragsters and pin-up girls, simulated the tonal structure of newsprint photographs - building up each image from a mass of hand painted monochrome dots. This can, in fact, be seen as a variation on the exploitation or exploration of the tensions set up between the mechanically reproduced image and the manual gesture which we have already seen in Rauschenberg and Hamilton.

In Edinburgh, where Laing still exhibits from some kind of historical loyalty, the still prevalent apathy and ennui of the struggling modern gallery world reflects a reluctant citizenry where little account can be taken of the cruel world outside.

Laing's name was made some 40 years ago. In this year's Tate Britain 'Sixties' show his painting, 'Wedding Jump' stood resplendent among his contemporaries. The technical mastery of his technique, using a pointillist system of black painted dots, survives today as in 'L'apres midi d'un Faune', again a searing critique of Iraqi developments, as in the haunting imagery of the defiant couple in 'American Gothic'. To paint like this, you have to know and have loved America.

In the Scottish National Gallery of Modern Art there is good reason now to include one of the larger Gerald Laing master paintings, so that we do not forget. If Alan Davie could be incorporated here, and allowed to epitomise the wider contemporary world, then so too could Gerald Laing. Apart from his paintings, his other life working commemorative figure sculptures has long fulfilled the needs of a niche market for such public and private commemorations. In that life, Laing now, at 67, seems to have reached a point of rare fulfilment.

As in all things touched by Laing's meticulous craftsmanship, the restoration and conversion of his northern fastness at Kinkell, on the Black Isle, and its subsequent documentation by him in a book, tells one much about Laing's individual skilll in making and mending. In the 1970s Kinkell had been a derelict shell. But by 1980 it gleamed like a gem, overlooking the Cromarty Firth, and is now an 'A' Listed Building. One is reminded of a recent appraisal of Norman Foster's St Mary Axe building in the City of London (The Gherkin) winner of the 2004 Stirling Prize: the reviewer rightly pointed out that today's art lies increasingly in the work of architects, not of artists. Not for nothing was the sculptor Antony Gormley on the jury. Likewise Kinkell remains today, another life of Laing, and is now the home of his own Charitable Trust where he applies for the benefit of students those carefully honed skills grown over many lives. 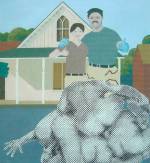