An exhibition of works by a group of international artists, Future Shock looks at the profound impact of technological and social change on our present and our future 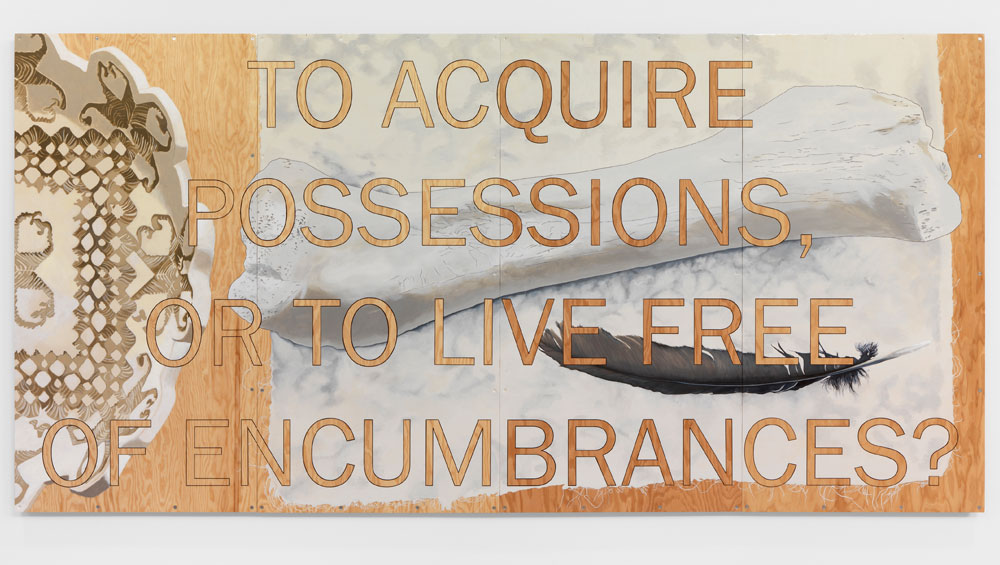 After a year of modernisation, Site Santa Fe has reopened its doors with a seven-month-long exhibition, Future Shock. The building, now renovated and expanded, is an old beer warehouse with concrete floors, high ceilings and startling light throughout. The exhibition imagines futures in which different geological, political and scientific terrains could be inhabited and poses complex questions about how our right to privacy is negotiated in wider society. It takes its title from Alvin Toffler’s prophetic 1970 book, an intricate study of individuals’ behavioural and psychological reactions to hyperfast technological and environmental changes. Future Shock is an appropriate name for the exhibition, which offers multiple artistic reflections on the past, present and future development of collective and individual experience. 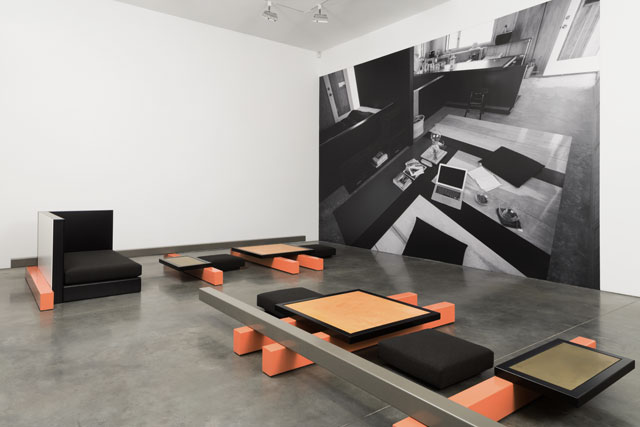 Future Shock is a group exhibition comprising work from 11 international artists, who provide multiple interpretations of the theme through installation, video, drawing, painting and audio recordings. The artists attempt to destabilise, criticise and reconsider how we cope with a world of increasing surveillance, personally and collectively. With the impending climate crisis, overpopulation and the rise of cyborg and surveillance technologies, Future Shock feels timely and pertinent. 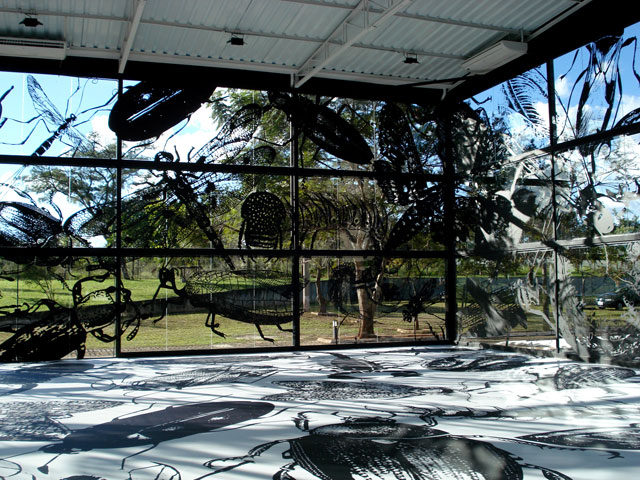 Before reaching the interior of Site Santa Fe, the viewer’s attention is drawn to the monumental adhesive vinyl bugs, Mundus Admirabilis (2007-), from Brazilian artist Regina Silveira (b1939), which appear to crawl across the surface of the glass entrance doors. What is striking is that, before visitors have even set foot in the show, the artist seems to have subtly directed their attention away from the manmade and towards the ecological. One of the more illustrative pieces in the show, these oversized bugs function as a brief commentary on the natural world.

But how can art explore this speculative future world in relation to previous scientific ventures? Nine artworks from the US artist Tom Sachs (b1966), a series of Nasa-related sculptures, films and installations from his ongoing Space Program, take up two rooms. The first room is a black and somewhat disconcerting space, featuring only a central glass plinth housing a watch. Viewers find themselves immersed within a tar-black room with the sound of a clock ticking above them. The clock is a haunting reminder that time maps experiences into the past, present and future. The second room of Space Program contains larger installations. There is an inventing machine, in which a television screen shows a moon-like object. On the far wall is a glass case containing ceramic sculptures, named Moon Rock in a Box (Ready to Die) (2012). It is an endearing piece consisting of glossy pinkish-red rocks, each given names, such as “suicidal thoughts”, “juicy” and “ready to die”. This is a direct, chilling reminder that the unknown – particularly that of space – can prompt existential inquiry in the viewer. 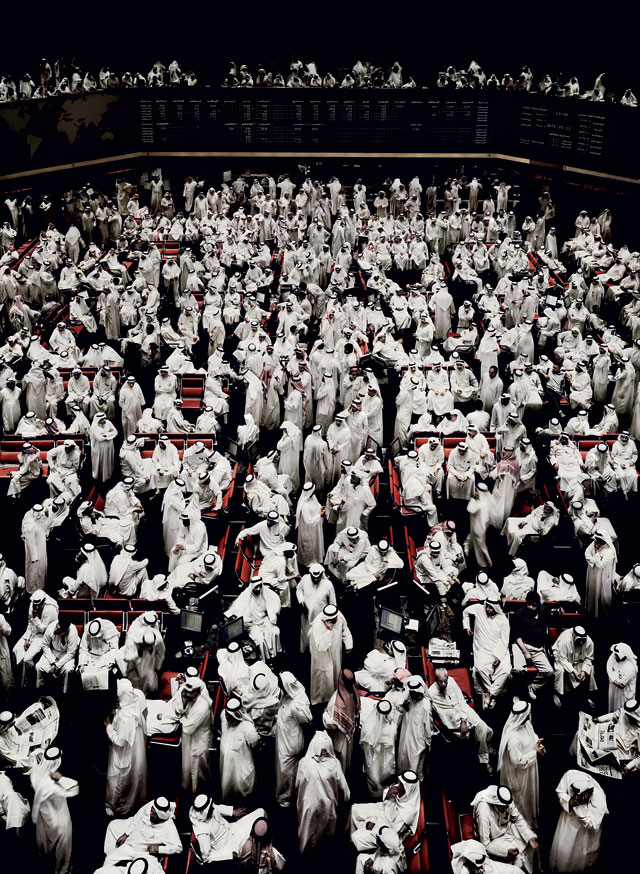 Future Shock’s first consideration of the human form is explored through collective experience in two works of German artist Andreas Gursky (b1955), Kuwait Stock Exchange (2007) and Chicago Mercantile Exchange (1997). His chromogenic colour prints are mounted on two walls, seeking through their grandness of colour and scale to make paramount the complexity of globalism. Two crowds are presented here: both at stock exchanges, but on different continents. On the opposite wall, two kitsch, enigmatic paintings from US artist Alexis Rockman (b1962), Battle Royale (2011) and Bronx Zoo (2012-13), are skilfully constructed. The next room is a slight change in aesthetic and, indeed, subject matter. The installation Linear Sequence (A-Z West) (2016), by US artist Andrea Zittel (b1965), presentsthe semiotics of domesticity through a number of appropriated mannequins and sofas. It feels removed from the materialism of most residential homes, yet prompts viewers to question their own ethical and moral codes of what is fundamentally important. 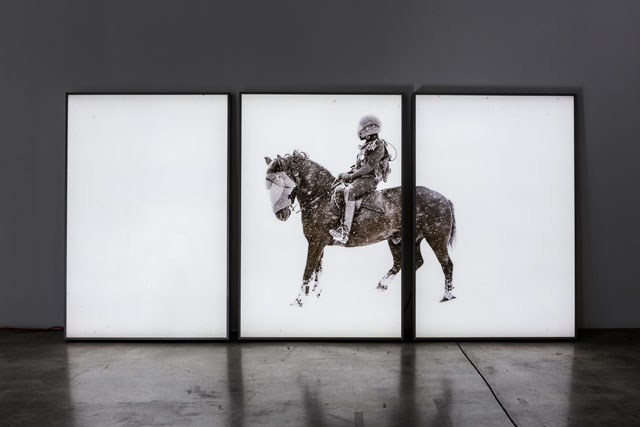 In the next room there is a film by self-taught Canadian artist Patrick Bernatchez (b1972). Lost in Time (2008-15) isa 46-minute film depicting a figure riding a horse in a snowy, desolate landscape, prompting the viewer to consider different cultural understandings of time. There are no traces of time per se within the film – not cosmic, temporal, linear or futuristic. This disorientates the viewer, requiring them to question where, and how, this figure interacts with the landscape. It is beautifully filmed, ephemeral and melancholy – perhaps to demonstrate how time often governs our understandings not only of the objective world, but also our subjective emotions. It seems here the protagonist is caught in limbo, in a state of living and dying,moving and static, in a nondescript wasteland. 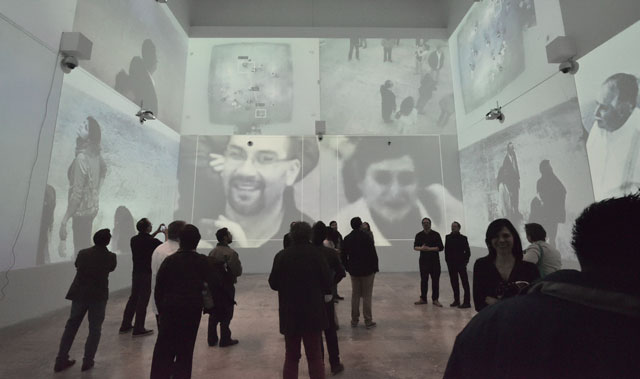 The most notable – and, I would claim, the most provocative – work in the exhibition is the interactive installation Zoom Pavilion (2015) by Mexican-Canadian artist Rafael Lozano-Hemmer (b1967, Mexico City) and Polish artist Krzysztof Wodiczko (b1943), which uses facial-recognition technology. The work takes up a whole room. Entering the space, viewers are involuntarily surveyed, with the CCTV footage immediately played back on the four surrounding walls, distorting and and changing their physicality. I had never seen myself before so objectively; it felt unnerving, otherworldly and disembodying. The artists have evoked a form of surveillance that is inherent in modern urban life; we are constantly filmed, tracked, subjected to algorithms and archived. Paranoia, of course, is a direct byproduct of surveillance – the computer analyst Edward Snowden, who famously leaked details of extensive phone and internet surveillance by the US National Security Agency, wrote: “Under observation, we act less free, which means we effectively are less free” – and the beginnings of a surveillance state affects its citizens on an interpersonal level. Being subjected to such an experience by Zoom Pavilion felt shocking, and acted as a mirror to how society is documented through surveillance.

Although the exhibition’s narrative repeatedly returns to ideas of speculative futures, some artworks confront slightly different issues. For instance, in a small side room, US artist Dario Robleto’s Setlists for a Setting Sun (The Crystal Palace) (2014) and The Sky, Once Choked with Stars, Will Slowly Darken (2011) are comprised of, among other minerals and objects, sea urchin teeth, homemade crystals, glass domes, audio recordings and mica flakes (which can be found in the mountains of New Mexico). From a distance, it looks like a cabinet of curiosities: an archive of collected geological formations. However, an audio recording describes how otherworldly objects can refer back to our own world, reminding us that even on Earth, there are still many geological objects and sites to be discovered. The recording maps the distinction between the unknown and the known, creating a finite boundary between real and imagined. The artist seems to be creating a visual language in relation to how speculative futures could emerge via geographical formations, through the context of art. 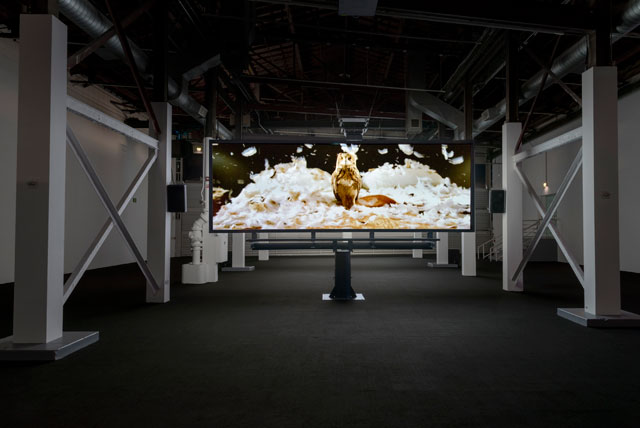 A post-apocalyptic world also raises questions of human and nonhuman forms. This is particularly apparent in Migration (2008), a film by US artist Doug Aitken (b1968) that offers an aesthetically pleasing, tranquil insight into worlds with and without humans. In this film, animals roam freely throughout landscapes and environments, separated from the control and discipline of human beings. The film runs on a gigantic, flat-screen television (12ft 8in x 21ft 6in – 3.9 metres x 6.5metres – to be exact), which is extremely demanding of the viewer, showing large deer grazing on what feels to be not only the screen, but also in the room. The film is grounding, aesthetically pleasing and simple in approach: a true meditation on the natural world’s rhythm and sensibility. 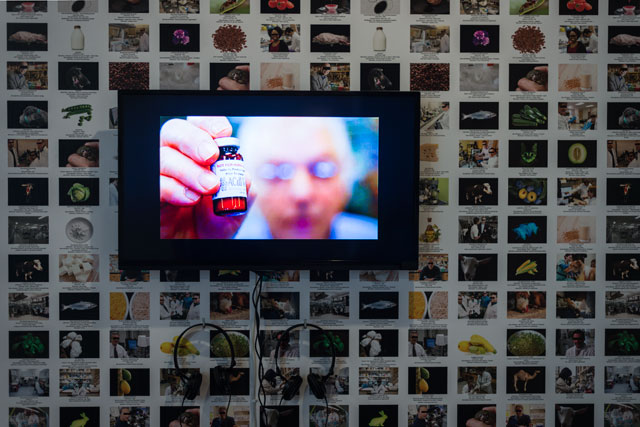 The final piece in the exhibition is perhaps the most memorable and appropriate work for conclusion. It is by US artist Lynn Hershman Leeson (b1941) and is a multimedia installation, Infinity Engine (2014-17), featuring an artificial intelligence bot accompanied by a microphone mounted on one wall. Aesthetically, it is unnerving; who is this character (that appears to present a female gender) and what does she want? She seems to be beckoning the visitor to approach her – which I do, and she asks my name. I reply, but swiftly move on, not sure that I want to conduct a conversation with a bot.

One might think that such an exhibition would reaffirm the overwhelming fear of what various futures might hold, but flashes of poignant humour remind us that our reactions are still our own, despite the warnings that surveillance is the biggest tool for oppression. These artists don’t offer an optimistic alternative: instead, they translate the complexity of what it is to watch, or to be watched, in an increasingly technological age. Throughout the exhibition, I was not haunted by the intricacies of each artist’s work so much as by the impending feeling that the anthropocene – the epoch dating from humanity’s significant impact on Earth’s ecological situation and nature – is a great force among us. Perhaps we have moved to a space where artists seem to be reflecting, as opposed to offering alternatives.