Following Columbus’s discovery of the Americas in 1492, it appeared to many in western Europe that the known world had miraculously doubled. It mattered little that the discovery was partly the extent of their own geographical ignorance (Columbus believed the land he was exploring was Asia).

The “New World” became a site of plunder and a blank screen on to which all manner of prejudices and fantasies were projected. Except, of course, it wasn’t blank at all; not for the estimated 10 million natives who lived there and for whom the discovery was little more than an invasion.

History was written by conquistadors, missionaries, settlers and other self-appointed civilising forces. The prevailing narrative contained a sense of orientalist awe (the lost city of El Dorado, for example) as well as revulsion (human sacrifice among the Aztecs). Both distracted from a western gaze that was chiefly concerned with a continent of gold, wood, soil and flesh. Latin America became seen as a repository of wealth, myth and superstition, much of it imposed from without. To an extent, it remains so in the predominant iconography we associate with it, from tin-pot dictators to the Day of the Dead, the romanticisation of the carnivals to the demonisation of favelas. What has been lacking is the willingness of a Eurocentric west to stop and listen to the people of Latin America and to begin to discern the complexity and diversity of the voices heard. América Latina 1960-2013 is a vast and brilliant exploration of a continent looking at itself. It is also a timely reminder that America is plural, existing not just as North and South, but in every inhabitant and each world therein.

At first, it would seem the curators in Fondation Cartier, and their co-producing counterparts from the Museo Amparo in Puebla, Mexico, have set themselves an impossible task. Representing an entire continent’s photography over six decades (the exhibition begins the year after the Cuban Revolution of 1959) requires a gargantuan effort. The risk of losing overall coherence and leaving crucial artists out is a very real one. Indeed, the sheer scope and eclecticism of the work, created by 70 artists from 11 countries, is momentarily disorientating. The exhibition is masterfully held together, however, by its adherence to a timeline of transcontinental political upheavals and also by the thematic consideration of how words interact with images. This is further broken down into four sections: Territory, the City, Informing-Resisting and Memory and Identity. While every country, and indeed every citizen, had unique and multifaceted reactions to overarching military and economic events, the common trials faced give the collection a sense of a narrative thread. What unites them is not necessarily some order or unity we impose after the fact, but merely, and profoundly, that line that adorns one of Goya’s Disasters of War prints. “Yo lo vi.” (“I saw it.”) Each, in their radically different way, say to those in the future: “This happened.”

Faced with economic instability, censorship and, at worst, the threat of torture and murder at the hands of the rightwing regimes then in power, the photographers showcased here adopted diverse techniques, creating a broad and impressive spectrum of results. Subversion comes in various forms throughout the exhibition, highlighting the particular ingenuity of the artist in question. Elías Adasme is photographed hanging upside down, privately and publicly, next to a map of his home country, Chile. The initial playfulness accentuates the horror when it strikes the viewer that this happened, at the hands of Pinochet’s torturers. Beyond the impact and bravery of such a statement, there is an astute critique of the dreadful absurdity and institutionalised injustice under the junta. Adasme would have faced arrest if apprehended carrying out the presumably illegal act, and then most probably he would have faced the very torture he was replicating, torture that was ostensibly legal.

The disruptive inventiveness of artists faced with terror and enforced silence recurs throughout América Latina. Centering on the continuing abuse of power and its effect on the abused, the collages of another Chilean, Eugenio Dittborn, managed to bypass the authorities and embargos by being distributed as “airmail paintings” via international mail. In Brazilian Anna Bella Geiger’s História do Brasil: Little Boys & Girls (1975), an observer is portrayed as a blinded voyeur, bereft of colour in comparison to the vibrancy of the featured natives. Recalling the Weimar Dadaists, Chilean Guillermo Deisler’s photomontage Untitled (1977-79) is a powerful, incongruous mix of barbarity and style, with a daydreaming Pinochet casually pondering a firing squad. It contains a reminder in direct quotes of the general’s contempt for democracy, which resonates given that he was supported by the world’s leading democracy. In Claudia Andujar’s Marcados Para series (1981-1993), the Brazilian photographs the often forgotten victims of man’s inhumanity to man, the native American population, with numbers hanging around their necks. Here, context is everything. It is almost impossible to view the photographs and not think of the Holocaust and, particularly, the photos of the Khmer Rouge victims from Tuol Sleng. Alongside the Argentinian Oscar Bony’s similarly emotive Suicidios series (1998), they are a chilling reminder that for every genocide we reel from, there are others that have taken place definitively in secret. At other times, faced with the obscenity of violence, the cry of defiance becomes a harrowing shriek.

One of the most powerful pieces on display Gloria Evaporada (1994-95) by the Peruvian Eduardo Villanes requires a degree of additional knowledge for its impact. To the naked eye, it seems just the farce of a man with a box on his head. The key is in the lettering on the box, Gloria Evaporada meaning “evaporated glory”, and the protean meaning of the word “evaporated”. In what became known as the La Cantuta massacre, a university professor and nine students were abducted, tortured and murdered by a Peruvian military death-squad in 1992. The charred remains of the victims were returned to their families in boxes of Gloria evaporated milk. When the government announced an amnesty for the killers in 1995, Villanes spelled out the word along the central highway in Lima and then organised a protest march, ending with a pile of Gloria boxes thrown in disgust in front of the Congress building. Just as the people had evaporated, so too had the guilt.

To a great many of the showcased photographers and artists in América Latina, it is enough to show that life can and will continue, despite the agents of destruction. The memento mori of the Brazilian Miguel Rio Branco and the Mexican Miguel Calderón are balanced by the silent vitality and boldness of the female prisoner captured by the Argentinian Adriana Lestido and the stare of the little girl, through the wall, in the outside world, towards the Chilean Marcelo Montecino. Individuality can be its own form of defiance, as can solidarity, and these figures are most definitely alive, as least for the camera flash.

As a professed aim of América Latina, the exploration of the interplay between text and image is an abundant success. The two are shown to be mutually beneficial; the pictures come alive when we read the corresponding translations and historical context, while the events come alive when shown on film in a way that statistics or descriptions could never emulate. The viewer is reminded that we are surrounded continually not just by images but also by words. We are immersed in typography and it shows here in a multitude of forms: graffiti, protest slogans, warning signs, advertisements, shop fronts, tattoos, maps, comics, newspaper print, videos, propaganda, threats, slanders and promises. In the terrible beauty of the Venezuelan Paolo Gasparini’s shot of billboards (El habitat de les hombres …, Caracas, Bello Monte, 1968), we struggle to orientate ourselves to the scale and overload of what we are seeing until we detect the minuscule silhouettes of people below. With Chilean photographer Leonora Vicuña’s El Mundo (1981), it is almost as if the scrawl is running amok on every surface. In one shot from the Mexican Pablo Ortiz Monasterio’s La última ciudad series (1988), the ominous threat of violence from the police looms in their lettering, as a family walks past and a boy innocently and intuitively turns to face them. With every act of negation, there is also the possibility of affirmation. This is evident in the vivid iconography of the Peruvian Herbert Rodriguez’s Violencia structural (1989) and the celebratory posters promising halcyon nightlife in the Colombian Ever Astudillo’s Latin Fire series (1975-78). The latter’s resemblance to newsprint and the ambiguous headline leaves the audience to determine what the implications of “Latin Fire” might be.

Often the complicated personal and slippery political identities merge into symbolic icons. The immense jigsaw To Be Continued (Latin American Puzzle) (1997) by Regina Silveira from Brazil may parade Latin American heroes and celebrities, but its incompleteness and the blackened-out pieces speak volumes. The Argentinian Marcos López’s Pop Latino series (1996) offers aspirational female figures (the Statue of Liberty, a domestic goddess, a beauty pageant winner) so grotesquely kitsch as to render them nearly dystopian. In Brazilian photographer Rosângela Rennó’s Untitled (America, 1998), a prisoner offers an upside-down America tattoo on his chest to the camera, and, on his back, a metaphorically incomplete Christ. Is the dynamism and hopeful rebellion of Ortiz Monasterio’s Sex Pistol (2000) really what it seems, or is there an element of theatre, fashion even folly to the scene? Symbols rarely remain stationary or trustworthy.

It would be insultingly simplistic to create any singular narrative for a whole continent, but it is tempting to view the widespread transition from dictatorships to democracies with a sense of, perhaps dangerous, optimism. For those who have known tyranny, a sense of progress is no small matter. The absence of justice for the victims, and the impunity of the butchers, mean it is a bittersweet development. At times, this suggests the photos are exclamations of powerlessness as much as protest, but they bear witness and prevent the repression of memory. It would take a fool to predict that democracy and economic neoliberalism (and its Bolivarian challenger) would bring an end to turmoil, repression and resistance. New masters emerge and new more surreptitious forms of exploitation accompany them. Again, the artists adapt and respond. With its sliding jigsaw formation, América, Nuevo Orden (America, New Order, 1996) by Damián Ortega of Mexico suggests that little has really changed bar a rearranging of the same components. In Marca Registrada (1975), Letícia Parente stitches the phrase “Made in Brazil” into the sole of her foot. Whether it is pessimistic to suggest that the dictator’s stamp has been merely replaced by the company brand remains to be seen. The actions of successive corporations, the IMF and the now mainstream political proponents of the “Shock Doctrine” (first tried out by Chicago School-trained economists under Pinochet) suggest it is an entirely reasonable and disturbing assumption.

Through aiming “to rediscover the works of major artists rarely exhibited in Europe” and succeeding, América Latina has shown us worlds we may have missed. We might consider the next half-century, how it will be recorded and how photographs like these will influence it. What we, on the other side of the ocean, might gain by finally looking, reading and listening is incalculable. 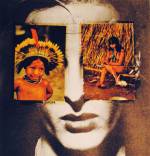 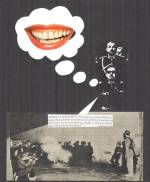 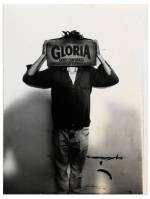 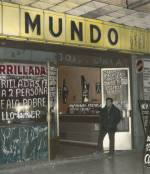