From Agit-Prop to Free Space: The Architecture of Cedric Price

From Agit-Prop to Free Space: The Architecture of Cedric Price

There can be few architects who have built so little but have had such an influence on architecture thinking in the second half of the 20th century as Cedric Price, forever associated with the Fun Palace that he and Joan Littlewood dreamt up at the beginning of the 1960s. As Stanley Mathews says in his book on Price’s architecture, this was a time of change and optimism, when Britain’s role in the world was changing as the empire dwindled and major power status was lost following the debacle of Suez in 1956, when the birth of new universities and the unexpected success of fashion, graphics and music led to the belief that the power of the establishment and Britain’s class-ridden society was really coming to an end.

Into this mix, in reality largely confined to London and its environs, stepped an unlikely alliance: Price, born to an architect father and trained at Cambridge University and then at the Architectural Association (AA) in London, and Joan Littlewood, 20 years his senior, whose working-class background had led her to form the Theatre of Action with Ewan MacColl in 1934 (the year of Price's birth). Littlewood followed Brecht's belief that theatre should be a means of social communication and address the political, economic and social issues of the day, empowering the working class to improve their lives by political action. This was a programme she revived at the end of the Second World War by establishing the Theatre Workshop in the Theatre Royal in London's East End.

It was in 1962 that the Labour MP, Tom Driberg, himself a colourful and eccentric journalist, introduced Price to Littlewood, who was just about to produce a major theatrical hit, 'Oh What a Lovely War'. Price by then had acquired a reputation as a radical architectural thinker, whose early projects had included a Unit House that owed something to Buckminster Fuller's 1940 trailer-mounted 'Mechanical Wing' (the two later became close friends) and collaboration with Erno Goldfinger on the Group Seven contribution to the 'This is Tomorrow' exhibition held in the Whitechapel Gallery in London's East End from 1955-56.

After graduating from the AA in 1958, Price worked briefly in the office of Fry and Drew before setting up his own office two years later and, in 1961, designing the celebrated aviary in London Zoo alongside Lord Snowdon, with Frank Newby as consultant engineer. Price also designed the 'Claverton Dome' with Buckminster Fuller for the American Museum in England and, because of his interest in computer technology, cybernetics and game play, influenced Archigram from 1961 onwards. However, what interested Archigram were post-apocalyptic, psychedelic plug-in cities inspired by science fiction, while what interested Price were ideas inspired by anarchy and how they might be used for cultural transformation.

Besides enabling social communication, Brecht also believed that theatre should be fun, an idea accepted by Littlewood, and at her first meeting with Price she talked about this aspect never suspecting that he would come up with a physical form. But for Price, this concept fitted into his ideas about the need for architecture to be flexible and democratic so that the Fun Palace - a place combining both leisure and learning - was conceived as a giant shipyard in which spaces for the cinema, theatre, dance, exhibitions, workshops, studios, eating, administration and so on, could be moved about, extended or removed at will by giant gantry cranes.

What Mathews does in his book is meticulously document how both Price and Littlewood developed and changed their ideas about the Fun Palace while searching for an acceptable site. First, there was the possibility of land on the Isle of Dogs in London's East End, then in the Battersea Festival Gardens left over from the 1951 Festival of Britain, and finally - and most likely - as part of the Civic Trust's plan for a green wedge in the East End, situated in the Lea Valley which, in the 1960s, was a scene of post-industrial dereliction. Remaining derelict for the next 40 years, today it is dedicated to the 2012 Olympics.

But, in the end, the changeover from the London County Council to the Greater London Council in 1964, devolving much power to local boroughs, and the opposition of local planning officials and architects, killed off the Fun Palace, especially as the Labour government elected in 1965 turned its attention to creating the Open University (OU). However, Price did manage to create a much smaller version in the form of the Interaction Centre (later called the Interchange) that provided a theatre, rehearsal rooms, studios, assembly hall, childcare facilities, café and administration offices in London's Kentish Town. Created out of woodwool, hardboard, batten walls, corrugated siding and windows from railway coaches, it was so successful that, before it was eventually demolished (as Price wished), there were moves to put a preservation order on it because of the great contribution the Interchange made to serving deprived people living in the area.

The other major project described in Mathews' book is Price's Potteries Thinkbelt, also developed in the 1960s, in which he envisaged turning another derelict area - this time in the East Midlands in England, once the centre of Britain's ceramics industry but by the 1960s a wasteland of abandoned industrial buildings criss-crossed by disused railway lines - into a huge intellectual park. Stretching from Tunstall to Madeley and Meir, and linked to the new University of Keele, the Thinkbelt would have combined pure and applied science in a way then little experienced in Britain, using interactive teaching units that could be shunted by rail between the three towns that acted as transfer areas and served four teaching nodes. In addition, four different kinds of student housing provided 32,000 units in 19 locations and these, like the teaching units, could be moved around and relocated by cranes and rail as teaching programmes changed over time.

But, as Mathews points out, revolutionary as Price's conception was, unfortunately it came at a time when the OU - also available to anyone who wanted to join - came on stream. Teaching largely through radio and television programmes, the OU required hardly any physical structures at all. But the Potteries Thinkbelt predated the period in which inventing new uses for abandoned industrial sites - especially if they were along a waterfront - became popular with politicians, architects and developers.

Analysing the influence of Price's thinking, Mathews says that Piano and Rogers' Pompidou Centre in Paris of 1976 comes closest to the Fun Palace, though the spontaneous public activity is restricted to the square outside and would never be allowed inside the centre itself. The Fun Palace is also reflected in Koolhaus and Tshumi's design of the Parc de la Villette, also in Paris. And Price's idea of providing unspecified space that has to be filled as the occupant wishes is manifested by Eisenman's Holocaust Museum in Berlin. As Mathews says, 'Set in uncomfortable proximity to one another, the forest of slabs instils a palpable sense of bodily awareness and the need to make sense of the significance of the place.' Even Maya Lin's Vietnam Memorial in Washington echoes Price's opposition to monumentality and his belief in free space.

However, as beautifully printed and lavishly illustrated as the book is, there are two serious omissions. The first is that there are a number of Price's projects that are not mentioned, including his Pop-Up Parliament, his plan for a green lung in Manhattan's West Side (another Lea Valley?) and his proposal - Ducklands - to turn Hamburg's redundant docks into a bird sanctuary. The second is that despite Mathews' deep erudition, with references ranging from the utopias of Thomas Moore and Francis Bacon to Arthur Korn's ideas about planning and Bergsen's theories of space and time (the book does read like a doctoral thesis), it is almost as if Cedric Price himself is not present. Indeed, one learns more about Littlewood, both pictorially and in the account of her life.

Certainly, there are observations on Price's use of detached collars (and two photographs, one from the 1960s, the other from the 1990s, show him in almost identical poses and dress), plus a reference to his reputation as a bon viveur and ability to mix as easily with the Tory grandee, Alistair McAlpine, as with the down-to-earth working class rebel, Joan Littlewood. But where is the Price I knew, warm and welcoming, generous and full of fun (and not at all bitter, despite the dismissal of his projects by stupid and ignorant people), armed with a small, rectangular cigar and, in a room full of people, the dominant presence? And there is only one reference to his long friendship with Goldfinger's daughter at the beginning of his career and none at all (except in the Acknowledgements) to the partner who has survived him, the actress Eleanor Bron. One has no idea of the role they played in Price's life. Even his death (in August 2003) is not mentioned. This seems very strange given that Mathews has benefited from personal contact with Price so is not writing about someone he did not know. 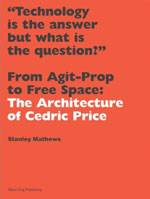