Francesca Woodman's photographs have consistently garnered critical attention since her premature death in the early eighties and this exhibition at Victoria Miro comes in the wake of the publication of a major monograph and a solo display at Tate Modern. The American artist's work is rarely written about without some mention of the dramatic biography behind it: Woodman began taking photographs as a young teenager, producing around 800 before her suicide aged 22 in 1981. This apparent precocity and intensity of production, coupled with the fact that Woodman frequently made herself the subject of her pictures, often colours interpretation of her work. However, it is important not to see her body of work and her life story as some kind of neat totality, each fully illustrating the other.

In the Phaidon monograph on Woodman, Chris Townsend says that she "never saw herself as a fully realized artist, even if that is how we see her now"1 and many of her photographs were experiments, attempts, forays into technique and composition. The images produced are nonetheless incredibly effective, whilst the recurrence of certain actions and motifs demonstrates the rigour she applied to her practice, together with a range of influences from classical sculpture to surrealism as well as Aaron Siskind's abstract surfaces. Woodman's subject matter was primarily the body and space and she often used the frame of the photograph as a space in which bodies could pose, move and perform alongside carefully selected props. The artist's approach to photography inverted its usual documentary application; instead she used the camera as a way of creating temporary scenes and spaces and bringing about the transformation of objects, surfaces and movement. As Townsend says: "with Woodman's art the medium that is most concerned with showing us what is indisputably there becomes preoccupied with hesitation, with uncertainty, with displacement of forms".2

On show for the first time at Victoria Miro is the Swan Song series created for Woodman's thesis exhibition at Rhode Island School of Design in 1978. The original prints suffered from poor storage, bound up in a tight roll over a number of years, and had to undergo careful restoration so that they could be separated and properly identified by Woodman's parents. Originally displayed unframed with torn edges, the images have been digitally reproduced and are now behind glass, surrounded by a clean white border.

At about one metre square in size the large scale of these photographs sets them apart from the rest of Woodman's work, as she usually used a 10 x 8 inch format. Throughout the series the camera is positioned directly above the scene, creating an interplay of flatness and depth. In each picture a white board or bench cuts horizontally across the vertical lines of rough, dark floorboards and Woodman arranges paper, fabric, prints and her own body over and around these surfaces. In one of these images she kneels and wraps herself over the white bench, the curve of her back and the blurred movement of her head and neck providing a counterpoint to a flat arrangement of feathers and the solid black line of the flex of the shutter switch. In another, her arm slots through a hole in a sheet of paper seemingly divided from the rest of her body which lies at a shallow diagonal across the bench. These images suggest a sculptural exploration of photography as surfaces and the body cut across and wrap around one another.

Alongside this series is a selection of 25 pieces from across Woodman's career, taken at RSID and in Colorado, Rome, New Hampshire and New York. In some works movement dominates, such as in On Being an Angel (1977), in which the artist's upper body is thrown back with such force that she seems to be falling towards the camera. Similarly in Self-deceit #1 (1978) and Untitled, Providence, Rhode Island (1975-1976) the artist uses mirrors to catch, multiply and fragment movement for the camera. Splatter Paint (1977-1978) shows the two-dimensional traces of an uncaptured previous action with black paint thrown up a wall, whilst to the right hand side of the frame a figure retreats, smeared with black paint. Other pieces place the body in more three-dimensional space: in Space2 (1975-1978) Woodman climbs within a glass cabinet, pressing her body into a corner as she is both trapped and put on display. Her most effective investigations of space appear in her House series as she attempts to mould her body to the corners and walls of a derelict domestic space. In House #4 (1976) she squeezes into a small triangular space formed by a fireplace surround which has come away from the wall, her legs splayed and her upper body blurred in movement as she struggles to become a part of the surrounding architecture.

Amongst the wide range of work on show it is Woodman's apparently more off-the-cuff pieces which have the greatest impact. Photographs such as Self Portrait talking to Vince (1975) - in which the artist holds a strip of plastic awkwardly in her mouth, and Sloan (1976), of her friend Sloan Rankin balancing to 'hold' a white dot painted on a concrete wall - appear to have been taken with little preparation yet give rise to particularly memorable and poetic images that go beyond language. 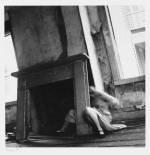 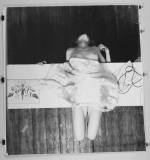 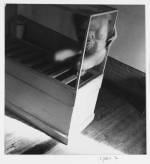 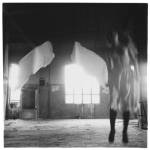 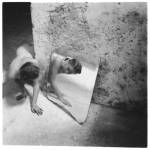 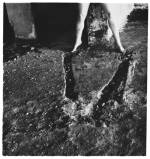