This exhibition reaches Edinburgh during the Edinburgh Festival of Art, having travelled via three US museum venues. The catalogue is published by Thames & Hudson Ltd, London and New York, and is co-authored by Peter Demetz, literary historian and Professor Emeritus at Yale University, and Matthew S. Witkovsky, assistant curator of photographs at the National Gallery of Art, Washington. As Peter Demetz says in his introduction to the catalogue, 'Modernity means, above all, a modernisation that thrives in the industrial world of the new metropolis, an emancipatory nationalism, and a democratisation based on widening suffrage to include women and working people'.

Photography, of course, provided the ideal with which to portray the many aspects created by the 'problem' of modernity. The important filmic study by László Moholy-Nagy, 'Painting Photography Film' (dated 1925), was developed while Moholy-Nagy was still at the Bauhaus, and underpins the way in which as a professor there he played an influential role in this trajectory. This treatise was republished in 1927 and propounded that camera vision could revolutionise and modernise all of human perception, no less. This all influenced Franz Roh who by deploying populist representational imagery strongly under the influence of Moholy-Nagy, after working with the art historian Heinrich Wölfflin, embraced the world of 'new Vision' wholeheartedly, to powerful effect.

Photomontage developed after 1924, and by 1930 it had taken up, as a technique and as a medium, a decisive role in the mainstream of visual arts discourse, a role which it has maintained ever since: the German dadaists took to this en masse, and with major effect. John Heartfield rose as a leading exponent, saying that, '... photomontage was a conscious technique, developed out of a politically inflammatory pastime'. Russian artists embraced the concept, and a famous work by El Lissitzky and Sergei Sen'kin emerged entitled 'The Task of the Press is the Education of the Masses' (1928). In 1923, there emerged, at the hand of the Dutch, German-born, artist Paul Citroen, a remarkable urban collage, simply entitled 'Metropolis'. This single work epitomises the real modernity as now universally conceived by artists and also recently by the public. There are superb examples of such tendencies in the current exhibition. It was wise of the organisers to foreclose the burgeoning history of photography in 1945, since the post-war and postmodern years demonstrated a hitherto never anticipated diversity in the art of 'Foto'.

There are to be found sublime moments where the landscape is captured by the split second, 'Highway to Minsk' (1916) by the Polish artist Jan Bulhak and 'Lowlands' (1925) by the Hungarian Gyula Pap permit an escape from modernisation. But as in František Cermák's Czech 'The Sadness of a Quai in Prague' (1934) a woeful sense of foreboding is rising. Inevitably, it seems the muddle of war descends on this world; 'the cut-and-paste world' of war returns. Janusz M. Brzeski's 1933 plate 'Twentieth Century Idyll No. 7' says it all, with the monstrous, helmeted horseman rising out of the spires of a strife-torn city. Not only could the artists of photomontage document history, they could also foretell its disastrous consequences.

In such ways this exhibition, and its elegant and superbly produced catalogue, tellingly and yet undramatically recreated that world, experienced through human eyes. Male and female, these are all-seeing visions. Stanislaw Ignacy Witkiewicz portrays Arthur Rubinstein (Zakopane, 1913/1914); Martin Munkacsi portrays a gently perspiring Leni Riefenstahl (or is it suncream?) from 1931. Fun and games in the air are represented by Yva (Else Neuländer-Simon's) whose 'Ramona in the littlest flying machine' (1929-30) captures the whiff of adolescent female rebellion. In the 1930s surrealism gradually infiltrates this enclosed world, and opens it up at the same time. Marianne Brandt's 'Untitled' collage (1930) reveals an autobiographical marshalling of her personal elements. Brandt was a favoured student of Moholy-Nagy's, and that talent was truly brought out, by teacher as much as by student. Perhaps after all, Moholy-Nagy was the key player in the whole sequence of photographic development, through the 1920s and 1930s until he left for America. 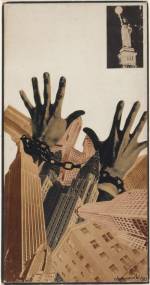 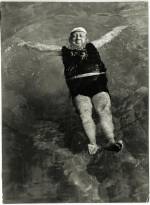 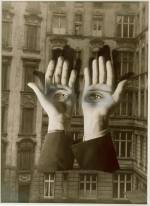 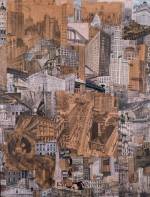