Faig Ahmed: ‘Collision of old and new is one of the concepts in my works’

Faig Ahmed: ‘Collision of old and new is one of the concepts in my works’

The Azerbaijani artist Faig Ahmed talks about his exhibition Fluid Forms, how he reinterprets the process of carpet-making, and the fact that traditional weavers were not happy producing carpets with gaping holes

Faig Ahmed explores the composition of a traditional Azerbaijani carpet by disjointing its structure and placing its canonic elements into open space. The recent exhibition Fluid Forms, at the Cuadro Gallery in Dubai, presented the work he created during his residency with the gallery earlier this year.

Janet McKenzie: It is a dramatic experience to walk in to the Cuadro Gallery in Dubai and see your recent artwork. It is based on intricate Azerbaijan carpets and you have made the material appear fluid so that each colour is paint-like rather than a woven material. What inspired your deconstruction of the iconic and beautiful carpet?

Faig Ahmed: The carpet is a structure – the structure of society, community or culture. But, like any system, having reached its peak, it should be destroyed, and then on the ashes of the havoc, you can build something new. I am not referring to modern traditional societies – an individual who will get his own experience is more important to me.

JMcK: Geometrically inspired intricately woven carpets are common to the Middle East, and the city of Dubai exemplifies the notion of “society in flux”. Does your artwork seek to reduce cultural barriers or to question traditional boundaries?

FA: The interesting thing is that the tradition does not disappear, it’s just transforming. People always need traditional sensitivities. This is the frame that keeps people together. The Fluid Forms collection was really inspired by Dubai. But the fact is that I didn’t create these forms, I took them out of the carpet patterns and just gave them volumetric configuration. And this easy transformation completely changes the appearance. Dubai is a city of the future, where tradition has functional significance. Borders can always be broken, but new ones could be created instead of recycling old ones.

JMcK: In Thread Installation, the threads are emancipated, set free from the confines of the floor rug form. The threads form spatial drawings, and are installed across long walls to create an installation occupying the whole room. Can you explain the impetus behind these works?

FA: The same material was used for wall embroidery and installation – this material is threads. The potential of the material that was used for thousands of years in embroidery was suddenly brought out. And this abstraction covered the space, creating a new form.

JMcK: From a western position, the works in Fluid Forms can be seen as the product of a society characterised by extremes: traditional versus international, rich versus poor, rural as opposed to city life. What is it like for an artist who has grown up during a period of very great political and economic change in Azerbaijan?

FA: It’s true that my works are always full of contradictions: there are extremes and totalities in them. But this contrast comes from inside my own nature rather than from any changes in Azerbaijan. Using Azeri carpets as a working material is a direct influence of the environment in which I live and work. Azerbaijan is an amazing country, where you can really find a thousand contrasts. In spite of strict traditions, this region has always been very flexible and progressive. The uniqueness of this part of the world is that it is constantly changing. Religion, culture, the political system, and even nationalities, which lived here – all are in constant transformation. Azerbaijan has changed its alphabet three times. And these changes have always passed easily to different generations.

JMcK: You trained in the sculpture faculty at the Azerbaijan State Academy of Fine Arts in Baku, graduating in 2004. What kind of art education did you receive? Was drawing an important part of the syllabus?

FA: The academy where I studied is no longer required to produce working artists. In the present, artists are born of themselves. We must search and invent. I am against academic education. The artist doesn’t need to learn: it is just a type of mind set, it is like becoming a monk and then living among another people. My education gave me only one lesson, that the system of education and creation are incompatible.

JMcK: You were one of 10 shortlisted artists for the Third Jameel prize in 2013, at the Victoria and Albert Museum in London, competing against 270 artists from all over the world. Why do you think your work has such an international appeal?

FA: Lots of people like it when someone breaks the established boundaries. To break the rules feels like that moment before you take a leap into icy cold water.

JMcK: Traditional carpets from Azerbaijan, and contemporary art represent a collision of old and new. Where do you feel most comfortable: Azerbaijan, Dubai or London?

FA: Collision of old and new is one of the concepts in my works. In fact, the carpets have also changed; they are always reflecting the environment and reality in their own way. I think London is the city where I could live and spend most of my lifetime.

JMcK: How were the “carpets/ artworks” woven? Were the traditional weavers happy to create three-dimensional pieces, or rugs with gaping holes in them?

FA: I thought that they were happy to be a part of producing my works, but when I spoke with them it appeared that none of them really liked it. Actually, it is quite challenging to try and change people’s way of doing things.

JMcK: Will you be exhibiting again in London in the near future?

FA: Yes, in January I will participate in a show at the Louise Blouin Foundation with Aida Mahmudova. The exhibition will be coordinated by Farah Pirieva, who initiated the project. Aida’s works are a mystery, which is difficult to escape, and my works are like an electric shock. We have prepared a joint project. Although our works don’t seem to intersect, we found surprising commonalities in concept. 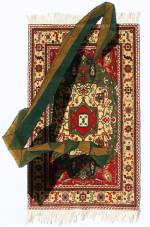 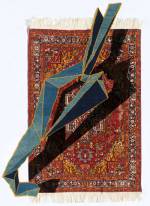