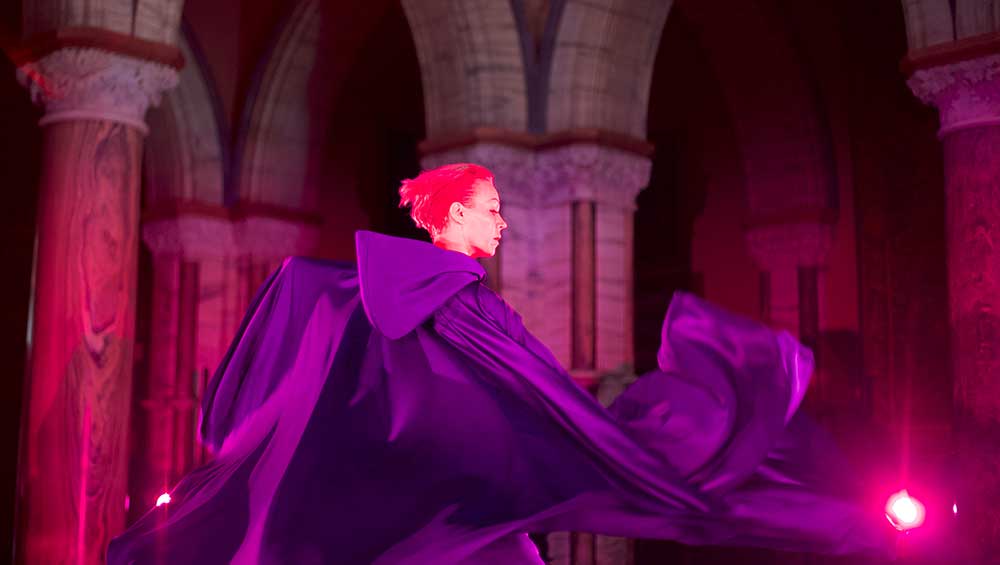 There are times when artistic collaborations result in a work that is so uniquely powerful that you know you have witnessed something important. This was the case for the collaboration between artist and poet Rhona Warwick Paterson and dancer and choreographer Eve Mutso in their performance of Pacing the Void at Mount Stuart on the Isle of Bute.

You need to understand a little of the history of Mount Stuart to appreciate the significance of this work. It is the ancestral home of the Bute family in rural Scotland. The old Mount Stuart was severely damaged by fire in 1877 and the red sandstone neo-Gothic mansion we see today was built by the third Marquess of Bute. The grandeur of the architecture extends to its interior, and the Marble Hall, made from Italian and Sicilian marble and alabaster, is an impressive 80ft high and decorated with the themes of astrology and astronomy that interested Bute. The renowned vaulted ceiling is adorned with a star map of the night sky. This was the atmospheric setting for Pacing the Void, and the audience stood in silence around all four sides of the hall’s balcony, gazing down at Mutso on a mirrored floor and gazing up at the constellations on the ceiling.

The collaboration centres on the Greek myth of Callisto, the strong huntswoman who was raped by Zeus, then turned into a bear before being set among the stars as the constellation Ursa Major, or the Great Bear. Mutso’s carefully choreographed movements began by conveying the experience of a strong female body. This was not only Callisto the huntswoman, but surely referenced every strong woman, including Bute’s daughters whom he raised as such, installing representations of female muses in the ceiling of the Marble Hall to inspire and empower them. The idea of multiple strong female role models was borne out by Mutso’s reflection in the mirrored floor and the multiple shadows that danced around the walls – this could be all of us. Dramatic lighting cast a stark contrast between light and shade in the manner of chiaroscuro, perhaps referencing the Italian Renaissance paintings in Mount Stuart’s considerable collection. 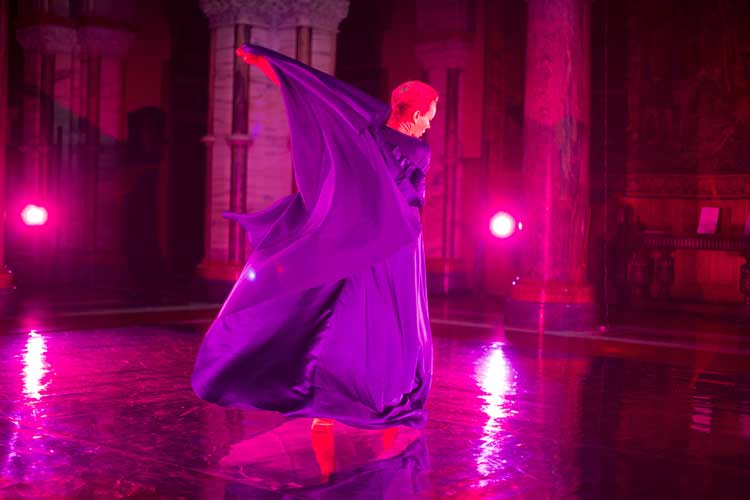 Mutso, at this point a cloaked figure, spun her whole body around as if in celebration, or perhaps hinting at the whirling dervish ceremonies first conducted by the mystic and poet Rumi as a form of meditation. Mutso’s robe spun, too, rising up and out in rhythmic flow. It was mesmerising, but the spell was broken when Mutso stripped the cloak off as if in revulsion, marking Callisto’s rape, and suddenly everything changed. The previously fluid confident movements of Musto’s body became more stilted and strained – the violated body in pain. Limbs and muscles bent, buckled and stretched. 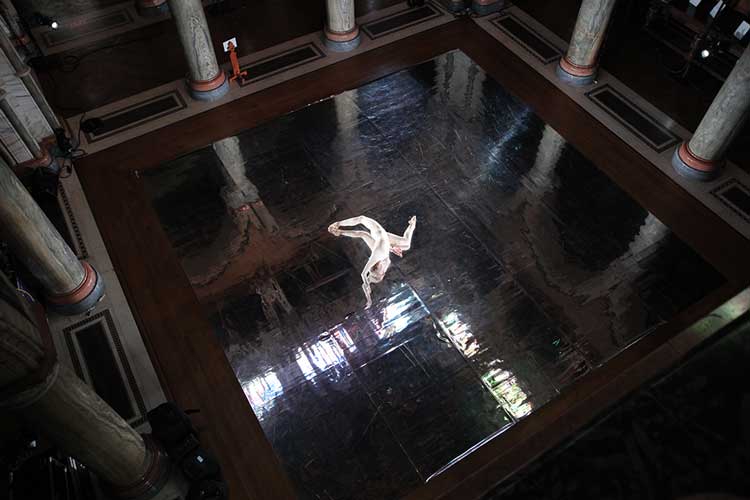 Now the performance space was saturated in anguish as Mutso’s movements articulated what could not be spoken. Limbs strained and were, at times, held in uncomfortably angular configurations that echoed the architectural spandrels above. All the while, the auric ambience of the constellations and the continuous poem-soundscape (the sound artist Baby’s soundscape and Warwick Paterson’s astonishing poem narrated by Gerda Stevenson) were integral to everything that was happening, not as a restraining factor, but as a way of holding Callisto’s tortured body within the space, enabling somatic movements that might allow for a kind of working through of her trauma. 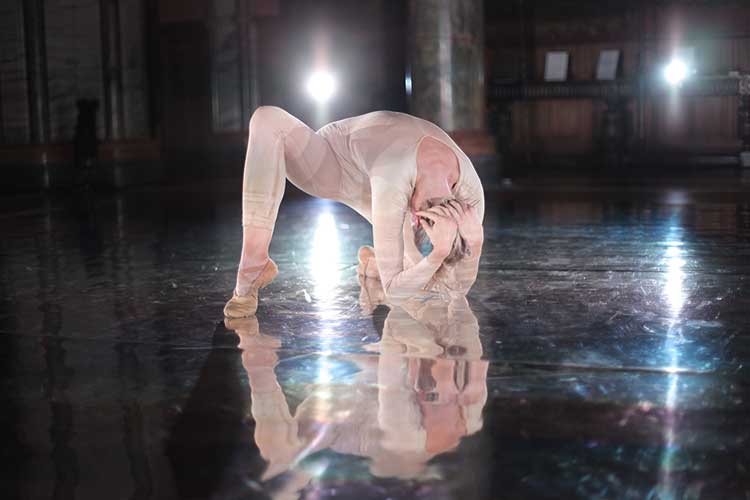 The next chapter of the story came as Callisto slowly and carefully placed a series of ceramic objects (made by Mutso and Warwick Paterson) on the floor. Each one was precisely positioned, held for a moment in her hands as if she were reluctant to set them down. The gentleness with which each one was placed on the floor belied their objecthood. It was almost as if they were part of her and together, they mapped out that part of the Great Bear constellation we think of as the Plough, another association with the Callisto myth. Yet there was a sense in which these objects mapped the body too. I was reminded of the painter William Coldstream’s method of “dot and carry” used in the life room to locate and measure one part of the body in relation to another, sometimes even drawing dots on the model. If Callisto was mapping her body with these objects (like Coldstream’s dots), then her movement between them might be viewed as a journey through her trauma towards some sort of healing and wholeness. This would account for the degree of tenderness and care with which the objects were carried, positioned and released. In the end, that was all she could do. 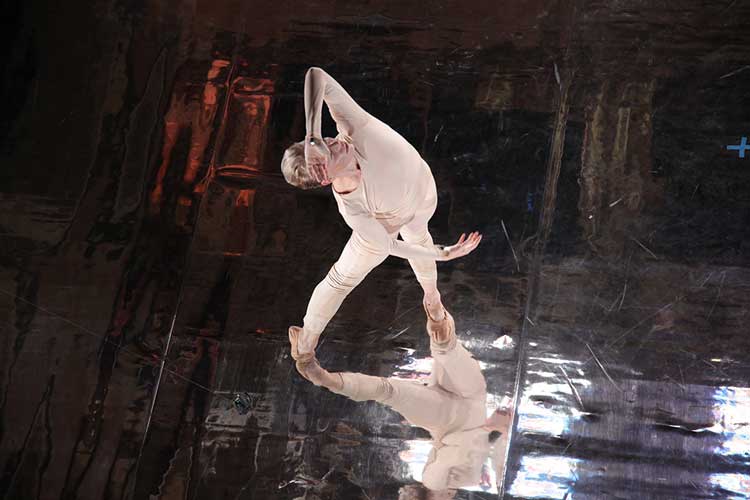 Pacing the Void is a choreopoem and its title references the Daoist ritual of exploring the spaces between science, stories, astronomy and the poetic imagination. The ancient Chinese writer Wu Yün wrote about this in his Cantos on Pacing the Void and just a few lines give you a sense of the seriousness of this ethereal ritual:

Angelic hosts approach the starry dome;
Their goal the Cosmoplast’s eternal home.
Their way is lit by lamps of shining gold;
Their road is long through Space’s utter cold.

Warwick Paterson looked more to the myths and stories associated with Mount Stuart than to ancient Chinese poets to find the words she was looking for, but I couldn’t help but think of Wu Yün’s cantos while watching the performance – another layer of meaning and interpretation. The wonderment of Warwick Paterson’s words and Mutso’s choreography came from their close intertwining with each other as well as with the soundscape by Baby. Their handling of myth, legend and story was knitted into the historic fabric of this building while responding in the contemporary moment. The cultural critic Elisabeth Bronfen would call these the “crossmappings” of aesthetic figurations between media and different moments in history. Whatever you call them, this performance was profound and should be seen again and seen by many. 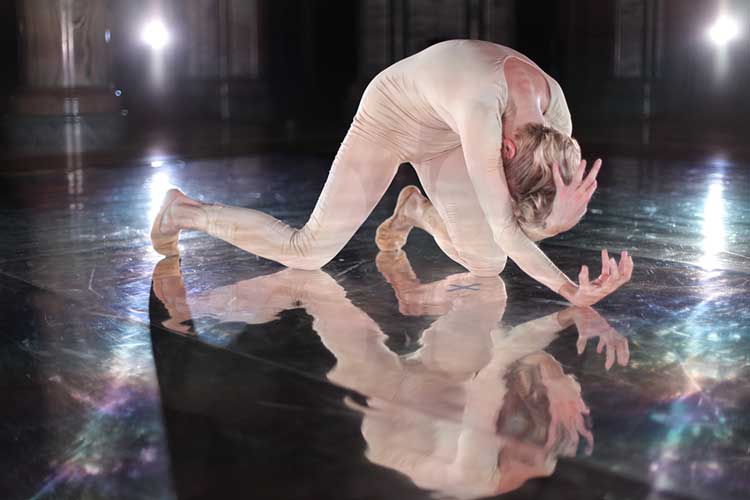