His voice is singular, his pieces united in simplicity: painted columnar forms that point to classical structures, and monochromatic paintings that favour traditional Italian painting

Every dawn, is first / Ogni alba, è la prima is Ettore Spalletti’s second UK solo show since his exhibition at the Henry Moore Institute in 2005. The celebrated Italian artist works near Pescara, on the Adriatic coast of Italy, where he has lived since he was born, in 1940. The artist rarely travels, instead dedicating himself to his intensive practice rather than to the demands of scheduled exhibitions. Despite this, his work has been shown at major exhibitions internationally over the past 40 years, and has been included in Documentas 7 and 9, Chambres d’amis [Jan Hoet’s innovative exhibition in Ghent in 1986 in which artists created work for private homes] and Skulptur Projekte in Münster. The artist has even been awarded commissions to design public works, including a memorial chapel in France and a fountain in Pescara.

In his paintings, sculptures and works on paper, Spalletti focuses on geometry and precision, favouring a meditative practice in which he combines simple materials with layers of chromatic tones. Spalletti was an important figure in Italian minimalism and the arte povera movement of the 1960s and 70s. The term arte povera, literally translated as “poor art”, was introduced by Italian art critic and curator Germano Celant in 1967. The movement was a reaction against the commercialised contemporary gallery system; in retaliation, artists used a wide range of simple, “poor” materials, such as rags and soil, to make art that freed itself of traditional practices and materials. The work on exhibition at Marian Goodman, spread out across two floors, spans a period of 40 years, showcasing Spalletti’s consistency in style and form over the decades. His voice is singular, his pieces united in simplicity: painted columnar forms that point to classical structures, and monochromatic paintings that favour traditional Italian painting.

In the main gallery (at the entrance of Marian Goodman), a series of Spalletti’s multi-panel paintings are presented. Pastel tones of blue, pink, grey and white have been washed over boards, complementing the luminosity of the gallery’s interior space. Displayed in the upper main gallery are Spalletti’s most recent paintings, among which can be found Paesaggio (2015), a multi-panel painting inspired by the sea and landscape views that surround the artist’s studio in Abruzzo. While, in form, the rectangular and square frames of Spalletti’s paintings meld into the gallery’s architectural space, their monochromatic hues give them an external quality. The colours are the result of a meditative process of applying a layer of colour at the same time each day, the tones capturing a certain hour, season or the weather. The final surface of Spalletti’s work emerges after a rigorous process of delicately sanding down the layers, leaving a skin rich in tone and texture. It is through their depth of colour that his paintings take on a more external quality, their vibrating colour fields opening out on to a space outside their architectural environment.

While Spalletti’s light-suffused hues compare to those of Piero della Francesca and Fra Angelica, the geometric forms of his work are overwhelmingly modern. His work can be recognised by its distinctive formal vocabulary, balancing between painting and sculpture, form and colour, interior and exterior space. In the exhibition, many of the paintings are flushed against the walls they hang from, blending into the gallery space, yet there are a few that take on more overt physical qualities. The panels that make up Dento l’acqua(2011) veer away from the wall they are set against, angled towards its audience and the rest of the gallery space. In the main upper gallery, Orizzonte dorata (2001) lifts away from the wall, hovering discreetly above the gallery floor. The structural, physical qualities of Spalletti’s work both integrate with and delicately alter the gallery’s interior architecture.

Spalletti’s sculptural pieces, however, are less subtle in their physicality, dictating the architectural space in which they are presented. Take Anfora (1982), for example, a whitewashed, wooden column, its placement in the room’s centre deciding the way the audience moves around the room to view the artist’s paintings. In the terrace gallery, Presenza stanza(1978/2016), an azure-blue monochromatic board, protrudes at a perpendicular angle to the gallery’s wall, reshaping the room’s layout and concealing the windows that open on to the terrace behind it. Elsewhere in the show, there are Spalletti’s smaller, marble sculptures, such as Bacile(1993), an alabaster circle rimmed with black, which, through its presentation at the entrance of the main gallery, becomes a centrepiece for the room.

One of the most recent pieces in the exhibition and perhaps the most distinctive is Lago (2016), built specifically for Marian Goodman. It is composed of a raised, wooden platform that fills the entire space of the upper side gallery, barring entry to its audience. Instead, the viewer stands at the entrance of the room, looking on to a blue field that hovers above the floor. Balancing at the centre of Lago is an alabaster sculpture, which, as a perfect ovoid, becomes the most organic of forms in the exhibition. Its rounded shape counters the angular edges of the rectangular field it rests on and the gallery walls that surround it, alluding to an environment beyond the gallery space.

The piece encompasses the distinctive qualities of Spalletti’s work – its depth of tone and geometric forms – that unify his work, new and historical. These distinctive elements, in the end, harmonise painting and sculpture, and the work with its architectural environment. The pieces that together make up Every dawn, is first integrate into the gallery and, inthe words of the artist, “take on and invade the space”. 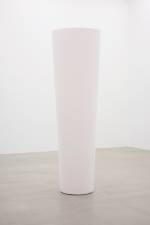