An Infinity of Graces: Cecil Ross Pinsent, an English Architect in the Italian Landscape by Ethne Clarke. Published by WW Norton & Company, New York and London, 2013

This publication comes not a moment too soon. Cecil Pinsent, like other 20th- century innovators, such as, for example, the Team 10 pioneer John Voelcker, did not survive into the final quarter-century. And it has taken 50 years for history reflecting such achievements to catch up before the spring tide sweeps all away.

Ethne Clarke has done full justice both to Pinsent’s architecture and his related gardens and landscape designs. Born in Montevideo, Uruguay, Pinsent was brought up in England following his family’s return home. Nevertheless, the essence of an expatriate mould seemed to stay with him throughout his long life. He remained peripatetic, with a career that, notwithstanding military service in two world wars, encompassed a creditable itinerary during the years of his highly regarded design practice, which was mostly based in and around Florence. Previously a distinguished student both at the Architectural Association School (where he won the Banister Fletcher bursary and medal in 1906) and the Royal Academy, a personal contact enabled him early on to move out to work in Italy.

The time frame was not ideal for Pinsent. He had just got going before the age of 30 when the first world war broke out. But he picked up the art historian Bernard Berenson and his wife as clients, and their friend Geoffrey Scott, the architectural theoretician and author of The Architecture of Humanism, became Pinsent’s practice partner for a time. In the 20s, in the immediate aftermath of the war, projects came thick and fast. Pinsent was in the centre of a close network of Anglo-Florentines, many of whom had acquired villas on the high ground around Settignano and Fiesole. Accordingly, at the same time, there was a surge of popular interest in the landscaped garden, influenced by Geoffrey Jellicoe’s survey, published in 1925 as Italian Gardens of the Renaissance. Just two years before that, Jellicoe, as Clarke relates, had spent a day with Pinsent showing him Settignano, San Domenico and sites around Fiesole. Some 16 years Pinsent’s junior, Jellicoe was deeply impressed. As Clarke quotes, Jellicoe said: “Pinsent was my first maestro in the art of placing buildings in the landscape.” Theirs was a chance meeting in 1923 on the site of Villa Papiniano, where Pinsent had been commissioned by Hugh Sartorius Whitaker to design, on a steep incline below the house, a superb formal garden and pool surrounded by an informal “bosco”. The experience with Pinsent and his work would remain with Jellicoe for life, and it undoubtedly influenced his key landscaped garden projects, such as Sutton Place, Ditchley Park and Shute House.

Clarke wisely focuses her analyses on a selection of four Pinsent projects, of which three were key Tuscan developments. While lesser projects of excellence have, due to Pinsent’s reticence, remained sadly unpublished, Villa I Tatti (client: the Berensons), Villa Le Balze (client: the American philosopher Charles Strong) and the greatest masterwork of all, La Foce (client: the Marchese of Val d’Orcia, Antonio Origo, and his Anglo-Irish wife, the biographer and writer Iris Origo) are premiated. La Foce today represents the fruition of three motives for the Marchese and his wife: a personal bond (Iris had been friends with Pinsent since her childhood): social improvements for the modernised estate and its workers; and “an infinity of graces” in the creation of a superb combination of formal and informal gardens and surrounding landscape.

Today, La Foce, as a kind of Glyndebourne musical centre, draws large numbers of international visitors. In surveying the architectural historiography that crowds in on any retrospective over the 20th century, questions always arise about the extent to which emergent modernism at the turn of the century demanded exclusivity. Were architects such as Jellicoe and Pinsent edged out of the limelight, corralled into an archaic reservation? Differing circumstances seem to have predominated in all cases. Jellicoe’s own landscape practice, innovative as it was, grew apace in England, much aided by public works. To a lesser extent, as a one-man practice, Pinsent had Tuscany in the palm of his hand. He even ended up with a military commission from l943 to protect and conserve Italy’s war-damaged heritage, on his own territory, so to say, where such monuments as historic bridges in the centre of Florence had been blown up by Nazi troops.

On the question of Pinsent’s position in the 20th-century sweep of modernism, no less than the distinguished landscape historian John Dixon Hunt (of the University of Pennsylvania) has recognised La Foce. In a compendium volume on the villa and its gardens and landscape, he said: “While wholly alert to the traditions of Italianate gardening, and so to its role as a lieu de mémoire, it is splendidly, confidently modern.” Clarke herself also briefly charts Pinsent’s personal life and affairs: an attractive man, he had many female suitors and pursued others, but never married. It has been said: “Architecture is a jealous mistress.” So be it.

This comprehensive book is timely and to be fully recommended both to architects and landscape architects, as well as to the broader public, for a wider understanding of the historical interaction of cultures, in a confused world, where eager professionals took whatever avenues they found open. They still must. 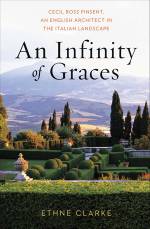