Cousin’s paintings are named after childhood games, but the contorted life-sized figures and faces in her paintings appear to be engaged in more complicated mind games 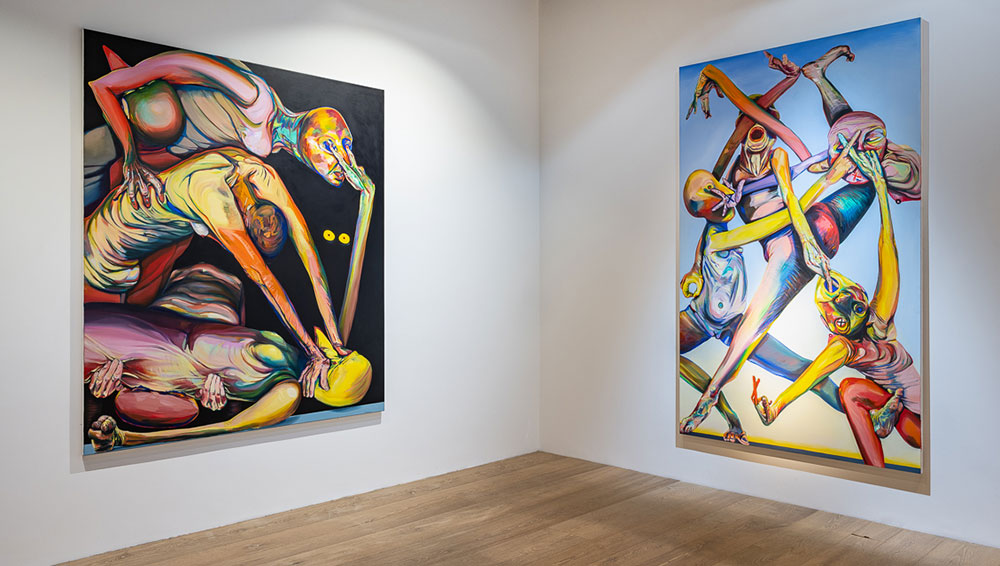 We all play games, whether children acting out imaginative scenarios, or the intricate webs of mind-games between adults in love and war. Constructing sides and goals and rules is the way in which we structure our societies as well as our most basic relationships. Games are also how we learn about the world, ourselves and one another. The systems of winning and losing, and the rules of participation vary according to the game; the game may perpetuate an existing hierarchy or challenge it. Games can be setups or transformational. They can be torturous or fun. They are how we get along, and they are how we wage wars. They are, at root, how we communicate. 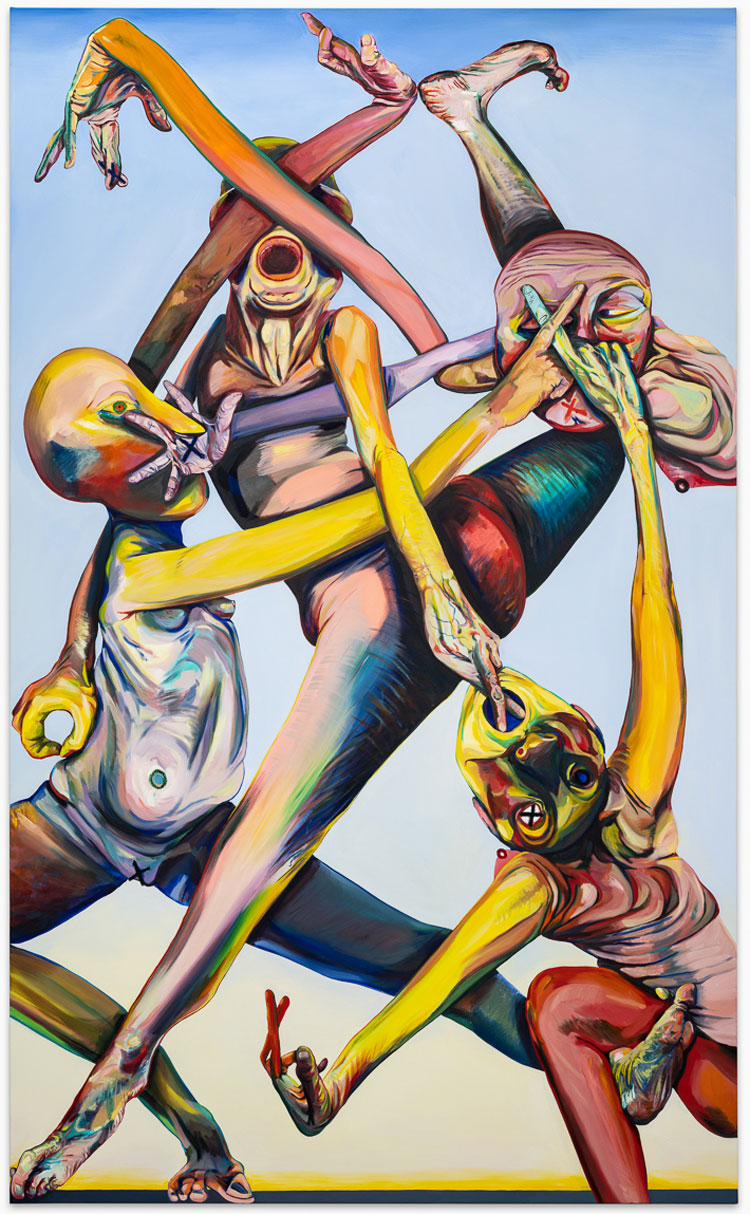 Emma Cousin’s new exhibition at Niru Ratnam Gallery – taking up two venues, 23 Ganton Street and 6 Denman Place in Soho – confronts this confusing and fascinating aspect of human nature. In Game Face, Cousin reveals the perversions and plasticity of game-playing, seeming to expose the ways in which games transform the individuals within them, consigning them to arbitrary roles and rules, for sometimes vague rewards. On large, life-size canvases, her oil paintings use vivid, intense colours to depict expressive, caricaturish figures, or parts of figures, entangled or joined up in some way, and often showing exaggerated, emotive expressions of repulsion, confusion or awe. The limbs are typically stretching or convulted, in some position that looks uncomfortable or even forced, giving a sense of high tension and intrigue. With a palette and style reminiscent at times of German expressionism, as well as comic-book melodrama, Cousin creates a world of extreme emotion and exertion. 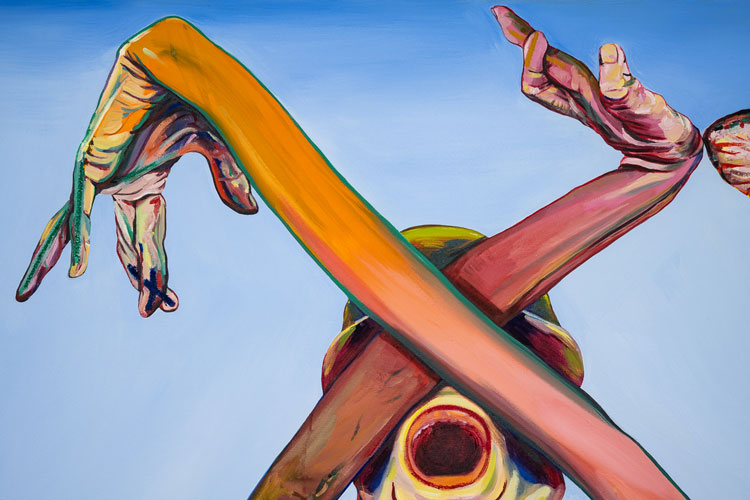 Indeed, what the characters who fill Cousin’s paintings are trying to win or achieve is unclear, even though the paintings are named after familiar games, such as Hide and Seek, Pictionary and Snap (all 2021). Despite these titles, the characters are embroiled in interactions that show them shape-shifting and distorted, entangled and even grotesque. They are both mixed up and mixed together. Figures and faces are involved in some unknown game or system in which meaning is embedded in the facial reactions and appearances of those with whom they are entangled. The characters become symbiotic and interconnected – not single characters so much as eclipsed and consumed by The Game.

As I walk around and encounter more entangled faces and limbs, I wonder what has happened, and what they are playing for. What are the stakes, the rules, the context? I don’t know, and I don’t find out. I realise that is the point – the game-playing itself, the way it contorts and confuses, is the point. In Eye Spy (2021), for instance, the three figures, are connected through what seem like beams of light coming out of their mouths and into one another’s eyes and mouths, their eyes looking directly at each other as well. This is an intense and probing image, recalling medical procedures (the light test for concussion, for instance, or having one’s throat checked) as well as the archetypal “three witches”, in the vivid, dark reds and blacks and the surrounding shadow. In Monopoly (2021), meanwhile, a figure seems disgruntled as its enlarged nose pierces another head, its tip reaching a third figure. It is gruesome and casual, caricatural and surreal. It speaks to a sense of sacrifice and suffering in group dynamics, perhaps, a comment on the cruelty of humans towards one another, when social norms allow, especially. 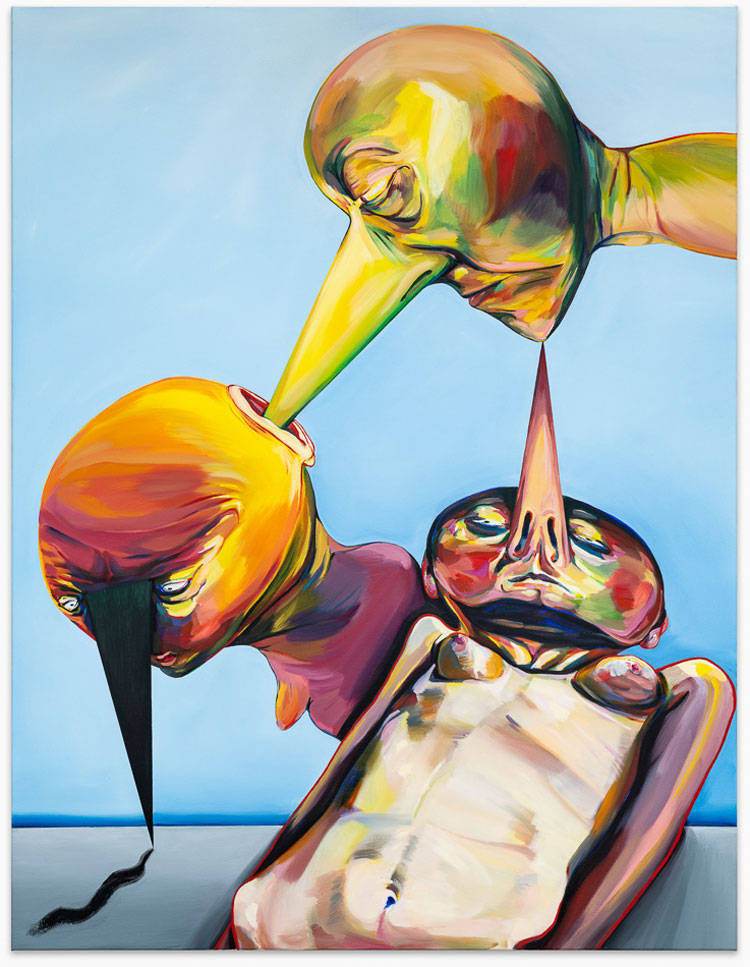 Throughout the exhibition, there is a sense of this chasm between humanity and the games that humans play. There is a feeling that game-playing detaches people from themselves and their individual integrities, or at least that by putting on one’s “game face”, something else is lost or denigrated. In order to play the game, the players must lose something of themselves, and submit to the rules and wants of the group and its systems.

Simultaneously, there is such a playful aspect to the show, that these darker insights are balanced by a sense of absurdity and humour at the bizarre nature of humans and their social rituals. The bright colours of the figures are like those of face paints worn by clowns or in the theatre, and here the artist connects the act of painting with the act of performing. For all the darkness and perversity of human nature, “making faces” and playing games is a sort of artistry, also offering an escape and even transcendence from ourselves and one another, a detachment from reality and normality. 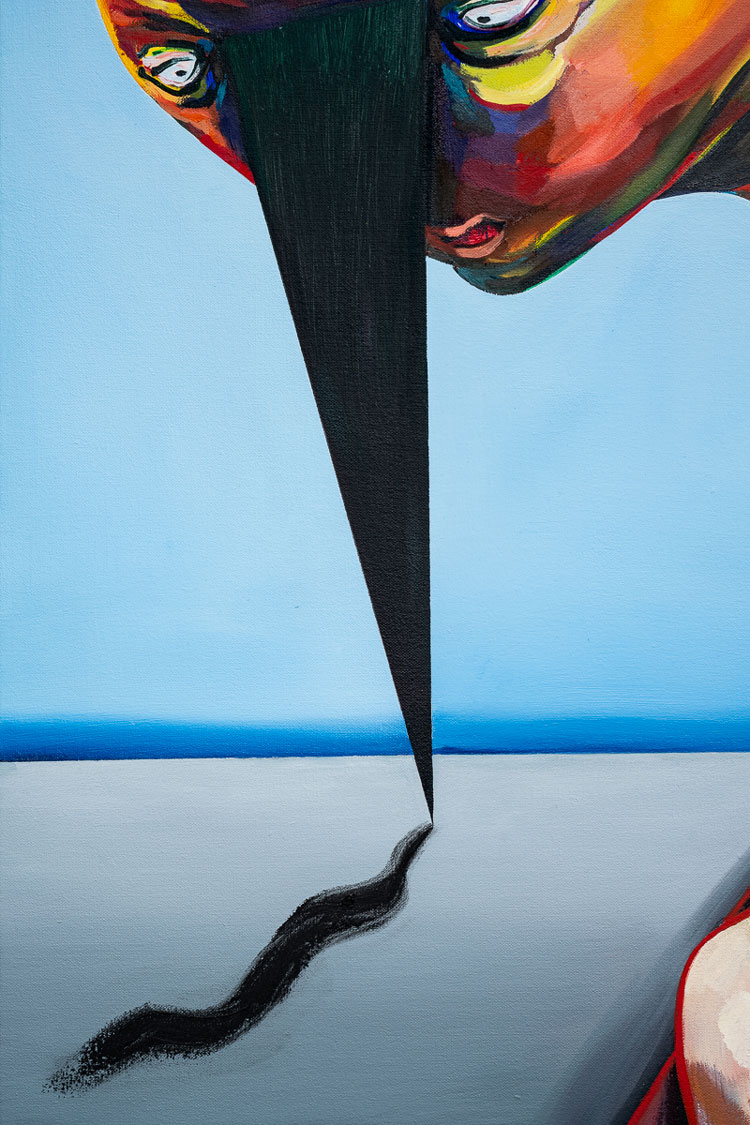 A game face is a sort of mask, therefore, a way of protecting as well as disguising, and in the theatre, also a way of communicating character and emotion. Clearly this play on mask-wearing will be relevant to everyone at this time, and Cousin presents the new reality of mask-wearing in a comical and fascinating way. Does wearing a mask, or a game face, make it easier or harder to communicate? Does it change how we communicate and what we try to say? Are these figures, all confusedly connected to one another, yearning for connection or just stuck in the system of interaction? Do they want to be in this mask-wearing game, this constructed new reality whose rules and ends are unclear and strange?

According to John Welchman, professor of modern art history at the University of California, the face is historically “the primary site of visual representation, and has shaped the very conditions of visuality … the head/face was either evacuated from the scene of representation, or hyperrationalised (Oskar Schlemmer), or etherealised (Odilon Redon), or radically distorted (Ernst Ludwig Kirchner).”1 With these ideas in mind, Cousin experiments with the positions and masks we put on, the faces we paint and present to the world, and the games we play with and through them. The creative, daring capacity of all of us is underlined here, and while these works do not suggest freedom or liberation as such – for there is such a sense of entanglement and angst – they do nevertheless create a space to consider the strange creativity of people, in art and in life and in the many games and systems we create, in between.