A photographer of fierce resolve and compassion, Dorothea Lange knew how to capture the very essence of struggle 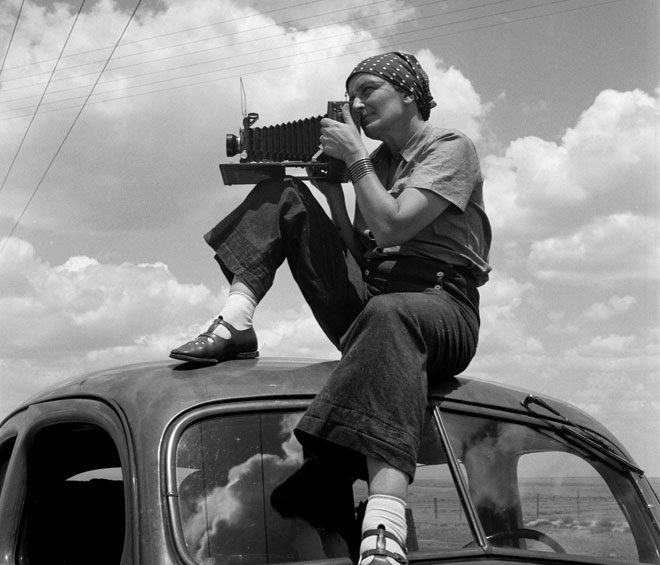 The writing of John Steinbeck is more familiar to me than the photography of Dorothea Lange (1895-1965), so when I walked around this most eloquent of exhibitions I saw the characters of The Grapes of Wrath staring out at me from the black and white “dust bowl” photographs. “The anger of a moment, the thousand pictures, that’s us,” he wrote. “This land, this red land, is us; and the flood years and the dust years and the drought years are us. We can’t start again.” Lange’s images were an inspiration to Steinbeck and there is a fantastic letter included in this exhibition – written on yellow wide-ruled paper – laying bare his admiration. “How I wish I may do it as gallantly as you,” he signs off.

Lange’s most iconic images were taken while she was employed, along with a host of other photographers, by the Farm Security Administration (FSA; set up to aid poor farmers), to document American life. But she – as indeed did most of her colleagues – focused on rural communities, in the hope that they might help to influence agricultural policy. It was the height of the Great Depression and financial disarray on the stock markets had cruelly coincided with widespread droughts in the US heartland. Migrants (or “Okies” as they became known disparagingly) were driven west in search of jobs, with their lives packed into battered cars, and close to starvation. Putting a human face to the crisis seemed like the only way to make a difference.

And those faces tell a story; prematurely lined and baked by the sun, they stare defiantly down the lens of Lange’s camera, some wearing the clothes of more affluent times, others in torn and dusty overalls and handmade dresses. They are tenant farmers and labourers, whose livelihoods have turned, quite literally, to dust. A small ramshackle camp has grown behind a gleaming advert for the Southern Pacific train that suggests you “travel while you sleep”. These are not just white migrants. Lange was determined, against the FSA’s advice, to show all the faces of the depression. Her boss worried that showing the Filipino, Mexican and black migrants affected by the crisis would diminish sympathy and popular support for the relief effort but, characteristically defiant in her approach, Lange made a point of ignoring him.

From this project came Lange’s most famous image, Migrant Mother (1936). Florence Owens Thompson was a 32-year-old mother, living in a makeshift tent near a camp of unemployed pea pickers. With her careworn face, her children in rags and a sleeping baby in her arms she became a symbol of suffering and dignity, of stoicism and motherhood. The image was picked up by the popular press and widely distributed with a simple caption and prompted tons of aid to be sent to the area, but Thompson had moved on before it arrived. She later said of the picture: “I wish she [Lange] had never taken my picture. I can’t get a penny out of it.” Nor did Lange, as it was the property of the FSA. But it did help her career to reach new heights.

Dorothea Lange. San Francisco, California. Flag of allegiance pledge at Raphael Weill Public School, Geary and Buchanan Streets. Children in families of Japanese ancestry were evacuated with their parents and will be housed for the duration in War Relocation Authority centres where facilities will be provided for them to continue their education, 1942. Courtesy National Archives.

After the Pearl Harbor attack of 1941, it was the Japanese community that would experience the backlash of a shocked nation ill at ease with its multicultural demographic – 120,000 Japanese Americans living along the Pacific coast were forced to sell their homes and businesses. More than two-thirds had been born in the US, but assurances of their American credentials fell on deaf ears. The head of the US army’s Western Defense Command stated chillingly that the “racial strains” remained “undiluted”. And bizarrely: “The very fact that no sabotage has taken place to date is a disturbing and confirming indication that such action will be taken.”

Dorothea Lange. Centerville, California. This evacuee stands by her baggage as she waits for evacuation bus. Evacuees of Japanese ancestry will be housed in War Relocation Authority centers for the duration, 1942. Courtesy National Archives.

Dorothea Lange. Sacramento, California. College students of Japanese ancestry who have been evacuated from Sacramento to the Assembly Center, 1942. Courtesy National Archives.

The War Relocation Authority was established and tasked with sending Japanese American citizens to internment camps, and Lange was employed to document their removal. While the government wanted to prove that the process was humane, and bore no similarities to the atrocities happening in Europe, the realty was a harsh one. Even though Lange was prevented from photographing the watchtowers and barbed wire fences of what were, essentially concentration camps, her sympathetic portrayal of the plight of the inmates did not sit well with the Department of War. It ensured that she did not own the rights to the images, and that they were kept from the public.

The postwar boom in California gave Lange a fresh wave of subjects, dressed in crisp pinstriped suits and white halter-neck dresses, but she was soon drawn back to the plight of the underdog. Against the background of the civil rights movement, she turned her attentions to the US legal defence system’s new scheme (introduced in the 1950s) to offer legal representation to those without the means to pay for a lawyer. The clasped hands and bowed heads of these photos perfectly demonstrate her interest in body language, and ability to convey anguish. In fact, it is her compassion that most brilliantly shines through in this wonderful exhibition, determined, as she was to “only photograph the people that touch my life”.