Dialogue with Trees: Five Stories of Rebirth and Renewal

Dialogue with Trees: Five Stories of Rebirth and Renewal

To celebrate its 90th birthday, the Tokyo Metropolitan Art Museum is staging an exhibition of works in wood, from vast installations to finely chiselled pieces, by five contemporary Japanese artists 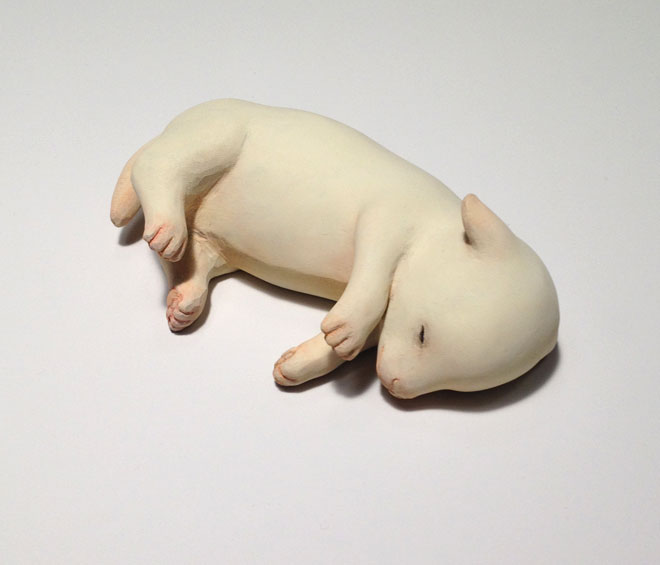 Dialogue with Trees: Five stories of Rebirth and Renewal at Tokyo Metropolitan Art Museum has been conceived to coincide with the museum’s 90th anniversary. The exhibition comprises work in wood by five contemporary Japanese artists, Takamasa Kuniyasu, Yoshihiro Suda, Kyoji Takubo, Yoshimasa Tsuchiya and Katsura Funakoshi, and ranges from monumental installations to minutely carved, fragile wooden sculptures. Some of the artists carve out their works from newly felled trees and others transform discarded lumber, but all of them give new life to wood.

The exhibition is a reminder that wood is still an important material for artists, even in an art world that sees increasing numbers of works shaped by highly developed digital technology. From ancient times, the Japanese people have believed that spirits inhabit the world around them, including wood. The tree is considered a symbol of rebirth or renewal and here underlines the rebirth and renewal of the museum after 90 years.

The youngest of the five participating artists, Tsuchiya (b1977), is a wood sculptor who applies the ancient methods used to carve figures of the Buddha to depict real animals such as lions, horses and dogs, as well as creatures such as the unicorn and other mythical beasts. Although for his large works, he glues pieces of carved wood together to make the whole, most of his figures are carved from a single piece of camphor wood, similar to the way in which ancient Buddha sculptures were made. Having studied all forms of sculpture at art school, from plaster and marble to metal, Tsuchiya decided to work in wood, which gives him the physical tactility of chiselling the grain and fibre. While a student, Tsuchiya travelled to the ancient city of Nara in the Kansai region – one of the most traditional in Japan – where he gazed at the ancient wooden Buddha figures in temples and was mesmerised by their serenity as well as their gentle expression. Tsuchiya’s contemporary take on these ancient figures was to visualise unearthly beings to which people living in the 21st century can still feel an attachment. Tsuchiya’s wooden unicorn, phoenix, dragon and qilin are imaginary, but created with such impeccable realism that they give the impression that there are truly souls in these wooden sculptures.

Takubo (b1949 ), who is known in France for his 10-year project restoring a derelict chapel in Normandy, gives new value to the way we look at discarded wood. Since the 1980s, he has been using wood sourced from old gates, doors and railway sleepers and recomposing them with found everyday objects such as wooden electricity poles into “assemblage” series. Takubo applies gold leaf to the pieces, giving them the aura of religious icons or halos. Although influenced by Marcel Duchamp’s readymades, where Duchamp played with words, Takubo attaches nostalgia to discarded objects that used to be part of our daily life. The exhibition includes Takubo’s newly created work in situ in the museum’s garden, which incorporates an aged gingko tree that shows bomb damage from the Pacific War in the 1940s. Takubo has adorned the bark of injured tree with square pieces of Cor-Ten steel to give new life to the tree.

From a slightly younger generation than Takubo, Kuniyasu (b1957) has been making monumental-scale wood installations since the 80s, showing works at Los Angeles County Museum of Art, as well as in the National Gallery of Canada. For the current exhibition in Tokyo, Kuniyasu built up 3,500 logs and nearly 50,000 ceramic blocks, creating a tornado-like installation that almost touches the 10-metre-high ceiling of the gallery space, and emits an enigmatic energy that is inherent in trees.

In contrast to Kuniyasu’s vast works, those by Suda (b1969) are so understated that one needs to scrutinise the museum’s floors and stairs in order not to miss them. Suda’s exquisitely carved wooden sculptures of wild plants and flowers look so realistic that visitors often pass by without noticing them as art. However realistic these single flowers and plants are, they appear in the most unusual of places – beneath a balustrade or behind books. Hence, they surprise the audience with the finesse of their sculpture as well as their holistic setting. Suda’s work is small, but it is meant to be seen within the setting as a whole, whether in a corridor, or inside a glass case in the gallery.

The wooden sculptures of Funakoshi (b1951) are human-like figures. For more than 40 years, he has been making busts of ethereal-like figures, which, once seen, are unforgettable. They defy the notion of gender, and the neutrality of the figures imparts a universal appeal. For an artist who grew up watching his father, a professional sculptor, at work, becoming a sculptor himself was a natural process. But Funakoshi’s awkwardly formed figures, meticulously carved from camphor wood, mix fantasy with reality, with hands attached to their torsos like wings, for example, that sometimes suggest an angelic being that floats in the air. Through his human-like figures accompanied by hands, the artist explores the notion that humans cannot live alone, but need to be supported by other hands. “Hands may be catching an invisible blessing or being,” is how Funakoshi explains the importance of hands in his sculptures. These sculptures come with abstract titles, such as Catching the Words with Hands, A Lunar Eclipse on the Water, Hands Can Reach the Sea. Carving sculpture and creating art seems to be the artist’s act of searching for invisible identity and visualizing what has not been seen before.

For artists such as Funakoshi, Suda and Tsuchiya, the physical process of carving and the time spent chiselling are very much a part of their art. This exhibition by exploring the diverse expressions seen using the same material – wood – compellingly shows the visitor the range of meanings that wood can have and its extraordinary possibilities as an art medium. 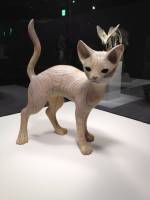 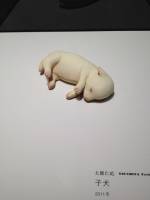 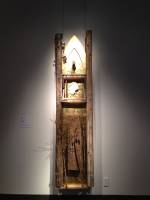 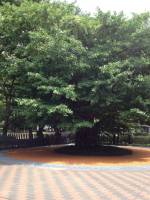 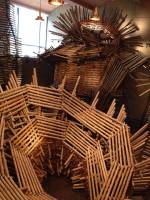 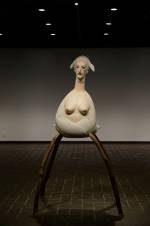 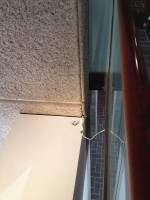 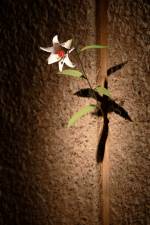