Derek Michael Besant: ‘A stitching together of each person’s voice allows a glimpse into the psychology of living in Edinburgh’

Derek Michael Besant: ‘A stitching together of each person’s voice allows a glimpse into the psychology of living in Edinburgh’

The artist talks about his project, which involved 50 strangers from Scotland’s capital city sending him photos of themselves and answering questions he posed. He explains how he played with the visuals and text to explore how people see things

The large-scale public art installations of Canadian multimedia artist Derek Michael Besant RCA have transformed facades of buildings in Toronto, London, New York and Vienna. He addresses aspects of sleep, dreams, falling, drowning, presence and absence using imagery from the public domain. His latest exhibition, In Other Words … Derek Michael Besant, at Edinburgh Printmakers for this year’s Edinburgh Festival, explores the elusive interplay of word and image to evoke memory and intention. To construct the exhibition, Besant photographed and surveyed members of the Edinburgh Printmakers community and created a series of intimate images that allowed the possibility of recognition, familiarity and identity by the audience.

He prefaced the exhibition with the view: “In every city, in every country, there is a collective narrative that is buried within the psyche of the individuals who live and work there. Edinburgh holds a critical position with its historical geography and its part in the recent dialogue and debate surrounding national identity.”

Besant collaborated with 50 strangers representing a cross-section of the city, by inviting them to send him a photographic portrait of themselves and answers to five questions that draw on their memory, self, place, desire and confessions. At the beginning of 2015, Besant, through Edinburgh Printmakers, wrote: “I consider myself as the artist and you as my collaborator. I live in Canada, so I am on the outside of your city looking in, and you are insiders living there. My goal is to include you as the subject matter to help me to create the artworks for my exhibition In Other Words for Edinburgh Printmakers.” Respondents answered five questions and supplied a head-and-shoulders photograph.

From the data he gathered, he constructed portraits, with integrated text fragments, displayed on large-scale banners secured to a building in a highly visible position on Dundee Street, one of the city’s main thoroughfares. The resulting installation was intended to reveal a hidden portrait of the city, reflected by the individuals. He spoke to Studio International about his work.

Janet McKenzie: Your portraits are enigmatic images enabling the viewer to play an active role in the narrative that you have established with word and image. Can you explain the manner in which you established the context for the Edinburgh project? Are you consciously presenting diffuse portrait images to represent an abstract “person” rather than an “individual”?

Derek Michael Besant: Actually, I want the presence of the individual to be present but the viewer to have to follow the process the brain cannot help but engage in, as far as trying to determine the gestalt of the face. By pushing the portrait out of focus, I allow the unfamiliar to become familiar. When I installed The Sleepless Night exhibition for The Centro de Arte Moderno in Buenos Aires in 2000, people who came to the opening started telling me whole stories about people they thought they recognised from the portraits who were complete strangers to them. The works are triggering devices … of recognition.

JMcK: Do you have a personal interest in this investigation – such as Scottish ancestors?

DMB: My mother’s family comes from Glasgow, so there is a thread to follow for my connection to place. That said, it is interesting to return to a place where one feels a connection to an ancestral past. There is an investment of self into the geographical that becomes psychological.

JMcK: Text is by definition clear and precise, yet you embed handwritten text in to the photographic images and make them blurred and enigmatic. Joseph Beuys stated: “Even if I write my name, I am drawing.” Can you explain how you came to explore the interface of word and image?

DMB: I am working with a two-part equation that is based on biological science to construct these images. The first is the faulty mechanism of the optic nerve, which gathers the out-of-focus mapping of the facial structures and reconstructs it. From a distance, the viewer can find characteristics that fill in details in the part of the brain that assembles what the person “looks like” – literally reconstructing an image of the recognisable face.

This instinctive desire to see more detail attracts the viewer to approach closer to see more, but in doing so, at closer range, the embedded text components start to emerge and reveal themselves and the brain cannot help but change over to the quadrant that “reading” is associated with, dropping the image of the face it was holding on to and it subsides and disappears … Between the two components, one builds a connection of the person depicted.

JMcK: What role does scale play, given that In Other Words is essentially intimate, yet you make works that are the size of buildings and therefore intensely public?

DMB: Scale is something I learned about from the first public art project I ever did back working with the billboard industry in 1979. And it has influenced my museum shows as well. But as soon as you integrate any art image out into the public domain, the site dictates limits, context and possibilities of what the encounter might be from viewers. There are always more people going to see your work on the facade of a building than ever frequent the gallery or museum. So it becomes a part of other people’s everyday encounter out there. Which is why installing works in train stations, airports or underpasses intrigues me, as that transient audience moves by my work or stops to photograph themselves with it.

I operate on the accidental encounter as a key approach to scale. As an art image, you are also dealing with staking that out differently than the advertising that we get used to in cityscapes as a continual flow of image and text everywhere. Intimacy can be considered psychologically when one interacts with the portraits in the gallery at close range. But on the side of a building, this equation changes. Scale is both psychological and physical. The encounter of observing a countenance that might look familiar, but that tells you their secret, connects to an intimacy that is more startling out there on the street than one’s level of expectation might be in a museum space.

JMcK: Are the titles of your works and exhibitions (Sleep Dreams: With Stolen Eyes) intended to provide clues to the viewer?

DMB: Sleep With Stolen Eyes was a direct English translation from Spanish of a term for “sleeping”. But it holds a poetic yield. Les Voyeurs de Songes is the same translation in French. Again, certain words elicit different responses. Stolen and Voyeurs for example … I never like to name a series for what it is, as much as naming beside it somehow. The problem with titles is that they come with expectations. So I allude to something as a lead in, but actually want the viewer to round out the equation. The End of Language, Fifteen Restless Nights and Broken Ground: Seven Cities are all exhibition series titles for some of my projects, and I hope they provoke a certain level of engagement to enter into for a viewer to complete for themselves.

JMcK: Has your project enabled you to discover more about the Scottish psyche, its identity and therefore its potential in the future?

DMB: What amazes and intrigues me is that I have worked with groups of perfect strangers in several different cities as a way to extract some kind of collective psyche. In Toronto in 2012, I installed 100 portraits with private thoughts in the downtown metro subway stations. At the Municipal Museum of Art in Györ, Hungary, I constructed a dozen portraits with text gathered from disparate moments of mundane observation of that medieval city. At the Akademija Centre for Art Research in Belgrade I have 30 portraits that each hold one perspective that together forms a story that can read differently depending on the order they are installed in. All of these similar approaches have resulted in unique bodies of work particular to place …

This project In Other Words for the capital city in Scotland was timed for participants to coincide with the recent referendum vote in the UK, as far as the invitation to be part of the sourcing process at arm’s length. Hence, there was an air of the population looking to their collective identity, and I think this opened up the dialogue and debate in how each of my collaborators revealed in their personal written responses to my questions. Together, as I had hoped for, there is a stitching together of each person’s voice that allows a glimpse into the geography and psychology of living in this part of the world. And it has a kind of beauty and melancholy within itself that I think exists in Scotland. There is also a determination and underlying strength, which has been a factor throughout their long history. So I feel the exhibition has captured a critical time and attitude that encapsulates a bigger picture of who lives there as a side-effect of what is always present in studio research … the unknown.

• In Other Words … Derek Michael Besant is at Edinburgh Printmakers, Edinburgh, 30 July – 5 September 2015. 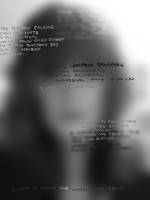 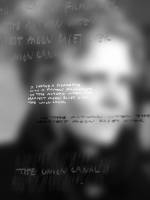 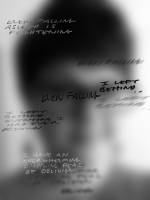 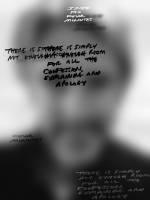 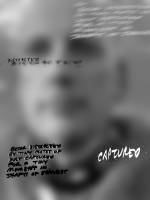 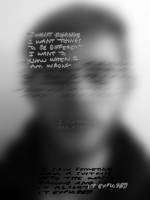