The curator talks about Encountering the Buddha: Art and Practice Across Asia, the current exhibition at the Arthur M Sackler Gallery at the Smithsonian Institution, which took three years to organise and brought together more than 200 objects spanning two millennia 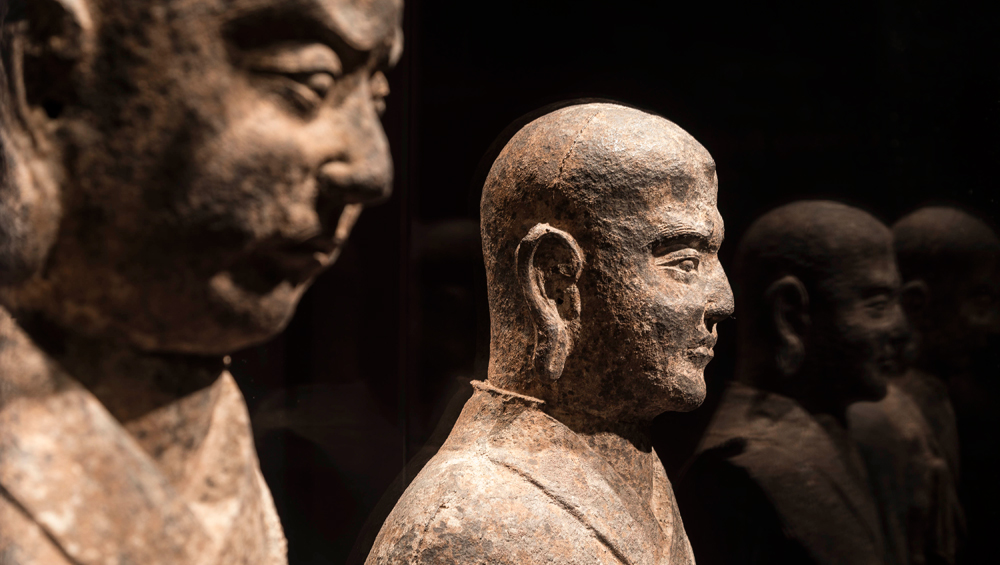 In 2011, Alice S Kandell donated 220 Tibetan Buddhist objects to the Arthur M Sackler Gallery. Together, the collection of bronzes, thangkas and ritual implements comprise the Tibetan Buddhist Shrine Room that is at the heart of the gallery’s current exhibition, Encountering the Buddha. The exhibition spans two millennia of Buddhist thought and three major schools of Buddhism – Nikaya, Mahayana and Vajrayana. There are several other immersive environments to be explored in the gallery space, as well as a rich array of individual pieces – sculptures of Buddhas, bodhisattvas, altarpieces, pilgrimage relics. Like the shrine room, the exhibition is designed to show viewers how these icons, images and objects would have been experienced in Buddhist practice, preserving their “sacred power”, and inciting us to think about the relationship between art and practice. 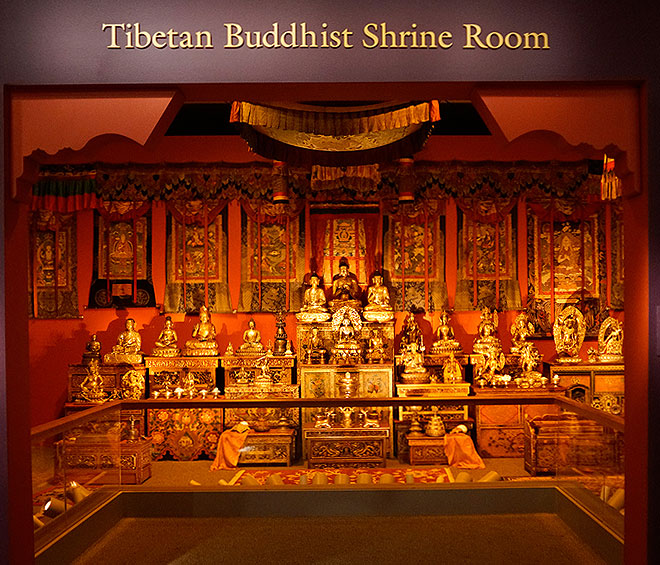 The show was co-curated by Debra Diamond, the Sackler and Freer’s curator of South and Southeast Asian art. Diamond, along with her co-curators Robert DeCaroli and Rebecca Bloom, spent three years working closely with curators of Chinese and Japanese art to locate Buddhist artworks, and thinking about how these artworks could be brought together in a gallery space. I spoke to Diamond via email to find out more.

Cassie Davies: I am really curious as to what the process was for curating such an impressive and large show. When did you begin planning for Encountering the Buddha? And what was the process for drawing together such a varied collection?

Debra Diamond: In October 2013, I presented a paper on the Tibetan Buddhist Shrine Room of Alice S Kandell, which we had shown at the Sackler in 2010, at a working conference sponsored by the Robert HN Ho Family Foundation, where museum professionals discussed methods of exhibiting Buddhist art in innovative and meaningful ways. It was a great conference and very inspiring. The Buddhist conference took place at a time when many US museums were exploring how to effectively use new technologies and address diverse audiences.

The conference inspired the then director of the Sackler and Freer Galleries, Julian Raby, the head of public and scholarly engagement, Nancy Micklewright, and I to work towards an exhibition that would juxtapose different modes of presenting Buddhist art. For example, we would group some objects in a shrine context and isolate others in traditional vitrines. We would then test those methods to see which resonated most strongly with our visitors and share that information with other museums. 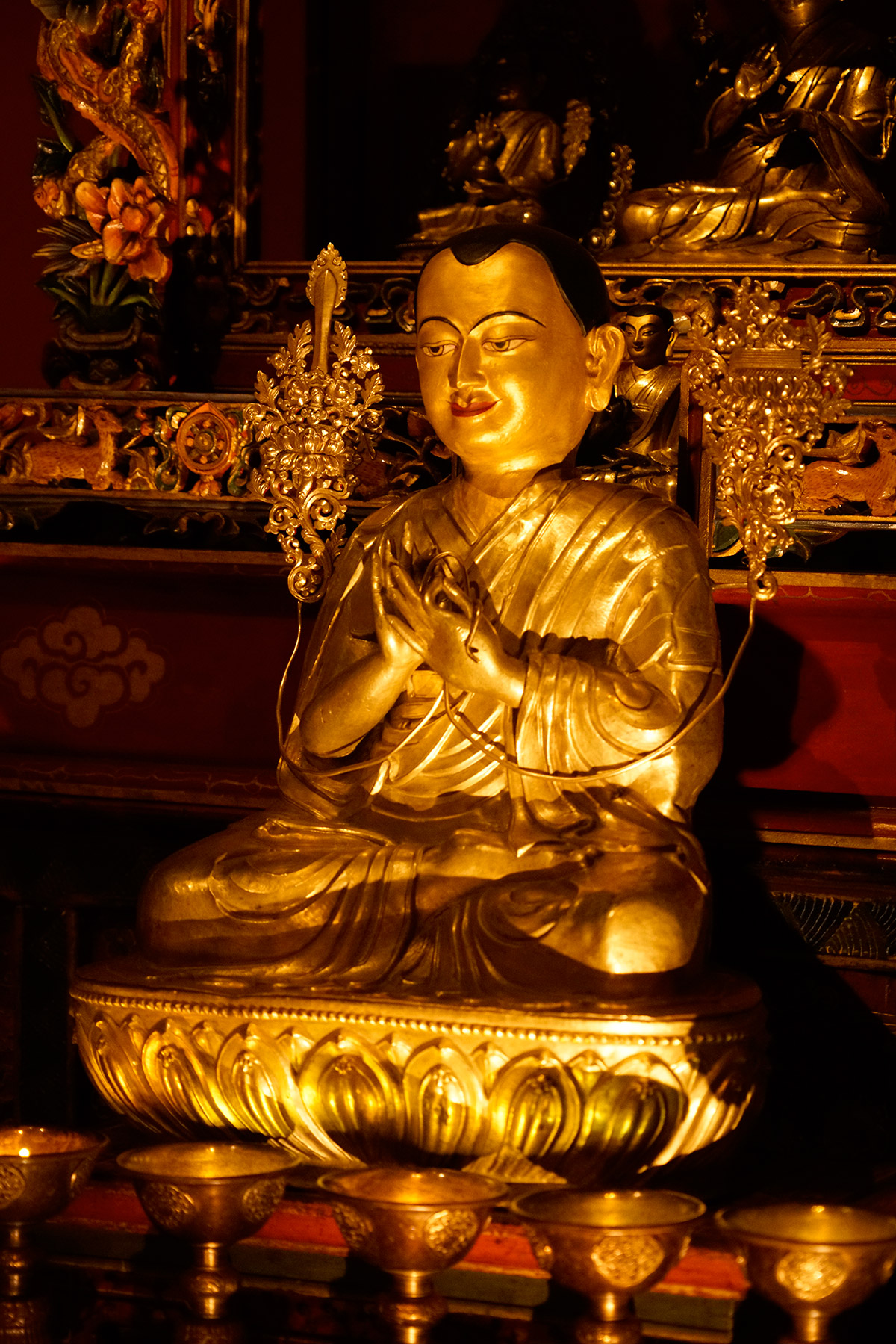 So, in February 2014 – set loose by the closing of an exhibition I had developed with an amazing cross-disciplinary team (Yoga: The Art of Transformation) – I began writing a grant for another cross-disciplinary exhibition, this time on Buddhism. It eventually became Encountering the Buddha.

In 2015, we were honoured to receive a generous grant from the Ho Foundation that made this project possible. We began with the objects – by figuring out which fine works we could exhibit. Since my areas are Tibetan, South Asian and Southeast Asian art, I worked closely with our curators of Chinese and Japanese art. Our curators with Buddhist collections were completely generous with their time and expertise, helping me to locate high-quality works that would be available for the exhibition, which we knew would run for three years. 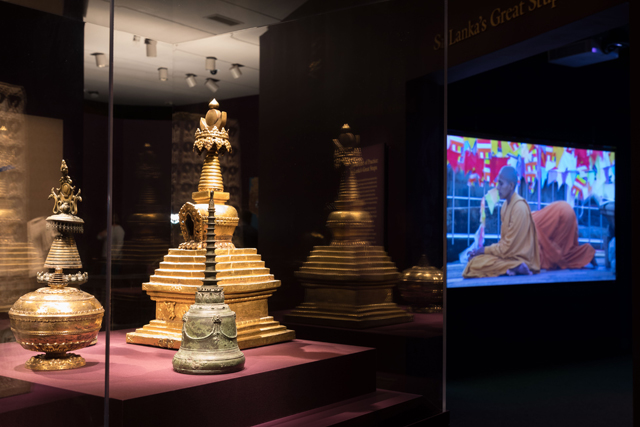 My co-curator Robert DeCaroli, a Buddhist art historian and professor at George Mason University, and I developed a concept plan and layout based on a selection of objects. There were many considerations. What could we communicate about Buddhism and Buddhist art with the objects? Which objects benefited most from which modes of display? How would we juxtapose objects to make connections and tell stories? We presented several versions to the museums’ director and curators, and eventually arrived at a layout that clustered objects into eight main sections: The Buddha; Many Buddhas; Bodhisattvas; Guardians and Guides; Dharma: The Teachings; Crossing Borders; and the immersive spaces: Tibetan Buddhist Shrine Room and Sri Lanka’s Great Stupa. While the Shrine Room would showcase how some Buddhist artworks are revered through assemblages, the Great Stupa section would depict a day in the life of a single Buddhist monument, seen through the medium of film. 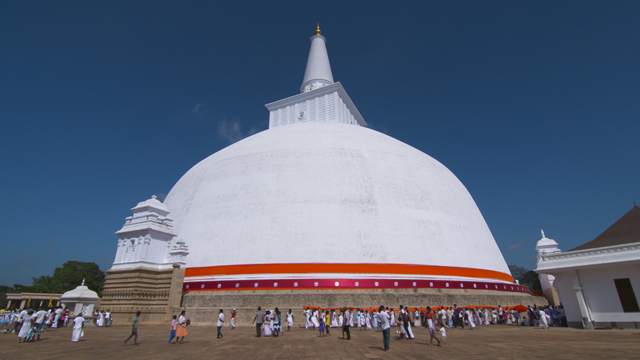 To further develop the plans, we convened a cross-disciplinary group that brought together academics and museum professionals, who gave us exciting feedback. A key suggestion from this group was to mobilise the construct of pilgrimage to link Buddhism across Asia.

In 2016 and early 2017, we refined and refined and refined the exhibition’s concept and design. Rebecca Bloom, a University of Michigan graduate student, joined the team. She made profound contributions, and we named her the third co-curator of the exhibition. Throughout the process, Donald Lopez, an extraordinary Buddhologist at University of Michigan, was our outside adviser. Our designers, Jeremiah Gallay and Nancy Hacskaylo, and our editor, Joelle Seligson, were critical to the process; they worked with us through every stage.

During this time, I proposed and then served as content editor of our museums’ first Buddhist art guidebook, Paths to Perfection, which became a parallel and interrelated project. We also produced several digital media resources, including mobile apps. We have books and in-gallery tablets available in the exhibition, allowing visitors to learn about works in greater depth and, we hope, inspiring them to visit our other Buddhist art exhibitions. 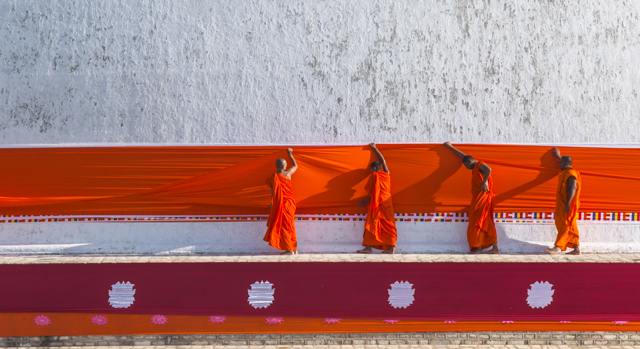 The film was important to convey that Buddhism is a living religion. In December 2016, a wonderful filmmaker, Stanley Staniski, and I went to Sri Lanka to film our immersive digital installation, The Texture of Practice. The film is of a single day – dawn till dusk – at a large Buddhist monument in Sri Lanka. Displayed across three screens, the film shows the different communities who weave through the sacred space, and the different types of activities they do while there – lighting candles and incense, offering a purple flower blossom, ringing bells, or sitting silently in meditation. At one point, the large white stupa is wrapped in a crimson cloth. (Stanley was a great teacher – this was my first museum film and my original storyboards for the three-screen installation were tiny sketches on Post-it notes.)

Early 2017 was all about writing labels and content for the apps, tablets and exhibition website. The three co-curators worked closely with our design, publications and educational programming teams. The tablet outside the Shrine Room features the accompanying app, Sacred Spaces (available free for iPad and iPhone), an incredible source of information on objects in the Kandell Shrine and all sorts of shrines in the Himalayas. You can’t get this information elsewhere; it is a superb resource, largely written by co-curator Rebecca Bloom.

We began installing in August 2017, and the exhibition debuted at the Sackler Gallery on 14 October 2017.

CD: The artworks are arranged with the aim that they be experienced by an audience as they would be in Buddhism, preserving their “sacred power”. Could you tell me more about this relationship between art and practice?

DD: We chose to focus on how Buddhists have understood and engaged with icons, images and objects – hence the subtitle Art and Practice Across Asia. I can’t think of past exhibitions of Buddhist art that have had this focus. Partly, this exploration has become more possible because there’s been a turn in religious studies to include material religion. This enabled us to combine art historical knowledge with insights from new scholarship. This choice also made Encountering the Buddha, which is on view in the Sackler, an interesting complement to the aesthetically focused Buddhist art exhibitions next door in the Freer. 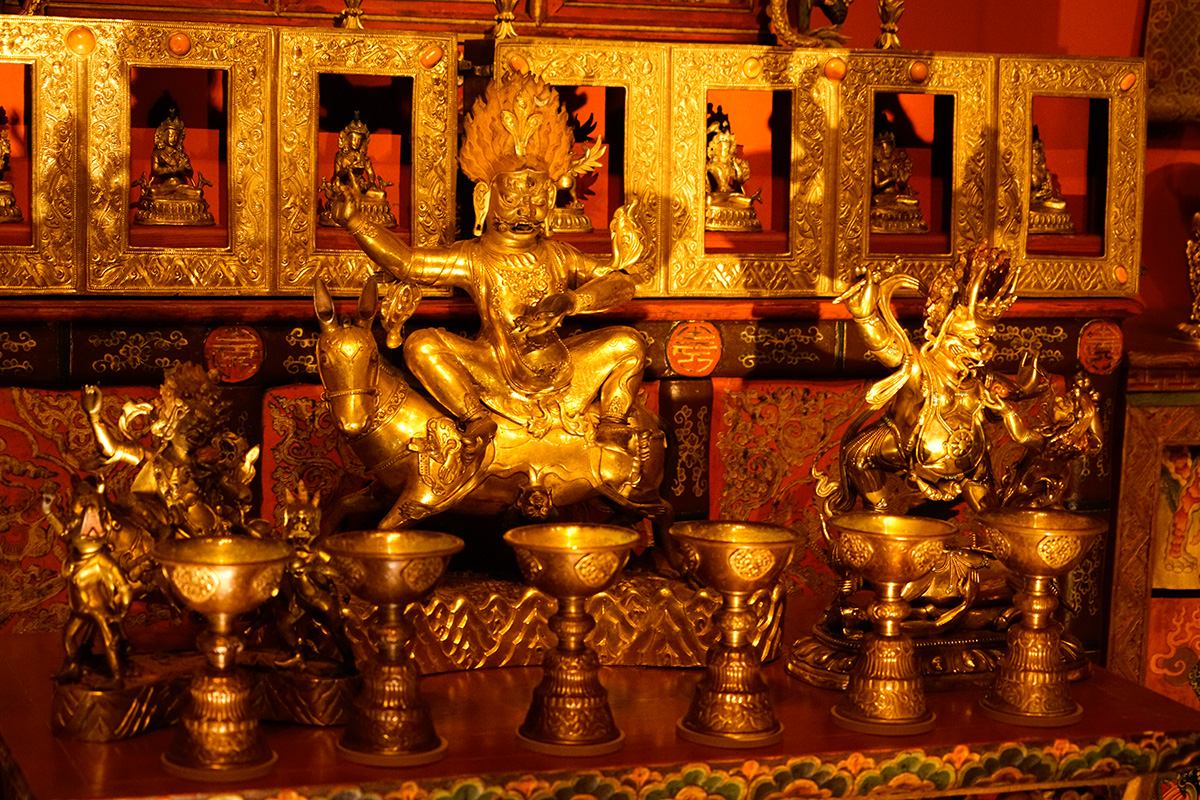 The Tibetan Buddhist Shrine Room that collector Alice S Kandell donated to the Sackler Gallery in 2011 has always been central to this exhibition. Instead of isolated works in vitrines, the Shrine Room brings objects together in a way that approximates a shrine in an aristocrat’s home. Alice assembled the shrine for use in her home, with input from Buddhist scholars, monks and conservators, and we adjusted the arrangement of objects for the purposes of exhibition. The works are massed, the lighting low and flickering, and the sound of monks chanting resounds throughout the space. Entering the Shrine Room is a powerful emotional and aesthetic experience. It manifests practice.

We created the immersive film about the Sri Lankan stupa to bring living Buddhism into the exhibition. It works well. And it’s aesthetically pleasing, not the typical museum documentary with a droning voiceover. Here, the film is ambient sound and images. Those who want more information can use the tablet on the couch, which provides background on the monument and explanations of elements in the film that may be unfamiliar.

CD: The Sacred Spaces app really caught my attention – it adds a whole other mode of experiencing the Shrine Room. Did your previous exhibition – Yoga: the Art of Transformation – also combine these various immersive dimensions (visual, sensual, digital)?

DD: Yoga is an embodied practice, so for The Art of Transformation we created two ways of juxtaposing art and practice: yoga teachers and docents led exhibition tours followed by yoga classes, and the practitioners in those classes were visible to exhibition visitors. Encountering the Buddha builds on that experience. My forthcoming exhibition (2020), on the emotion of place in monumental paintings from Udaipur (in Rajasthan), will also explore the immersive, the visual and the sensual. 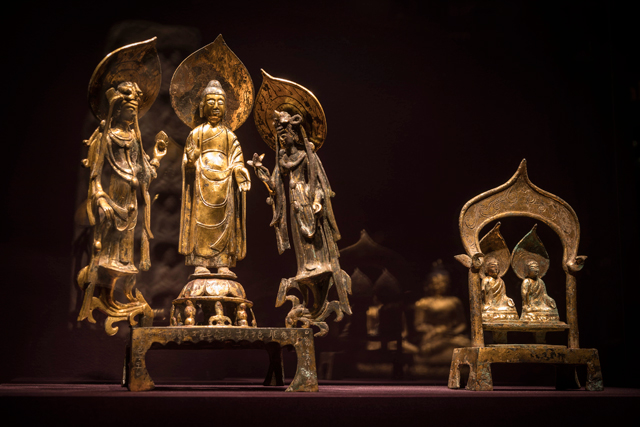 CD: How are you hoping viewers will experience Encountering the Buddha?

DD: We hope that bringing the experiential into the exhibition will invite visitors to engage with artworks in a more profound way, and to learn about Buddhism in a deeper way. We’re going to begin interviewing visitors soon, to learn what works and what doesn’t work. I adore artworks, and I’m hardwired to look closely and explore them, whether they are familiar or not. But for many of our visitors, Asian art is esoteric and art museums are intimidating. Experience is a way of invoking the lived histories of objects and of inviting different senses (especially hearing) and emotions into the galleries.

We sought to juxtapose art and experience in ways that don’t disturb the act of closely viewing artworks, while also allowing visitors to create connections. 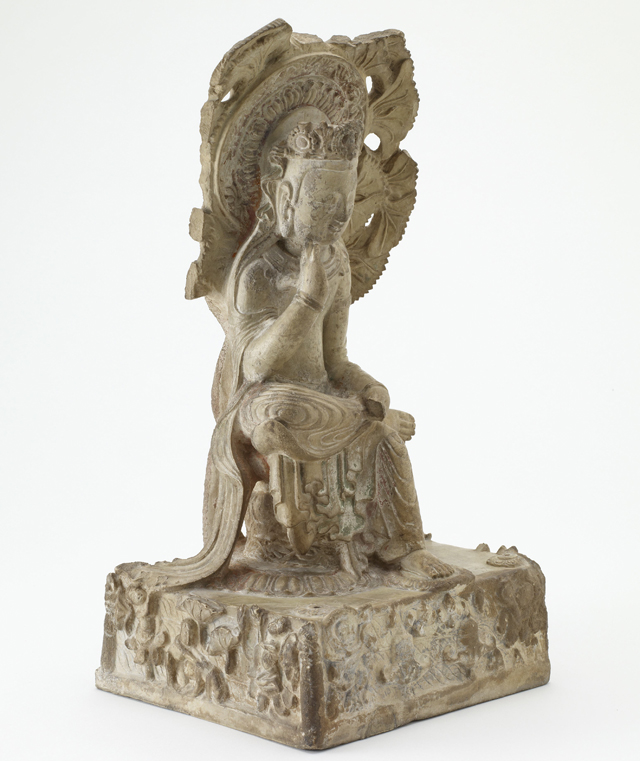 CD: What else, if you can choose, are highlights for you?

DD: Working collaboratively was a highlight; I’ll always be grateful for that experience. But now I slip in daily to the exhibition for inspiration or calm. I often visit a charming, small marble Maitreya, dating to China’s Northern Qi dynasty, patiently seated beneath a tree with beautiful ginkgo-like leaves. And an extraordinary Tibetan Padmasambhava with a face both fierce and wise. Really, I could go on and on … 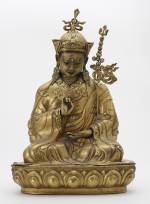 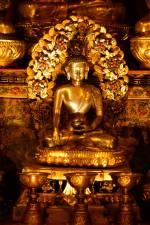 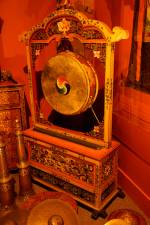