Suffused with Buddhist philosophy overlaid with political overtones, the extraordinary works of this Thai artist can be touched, walked over and, in some cases, taken home for free 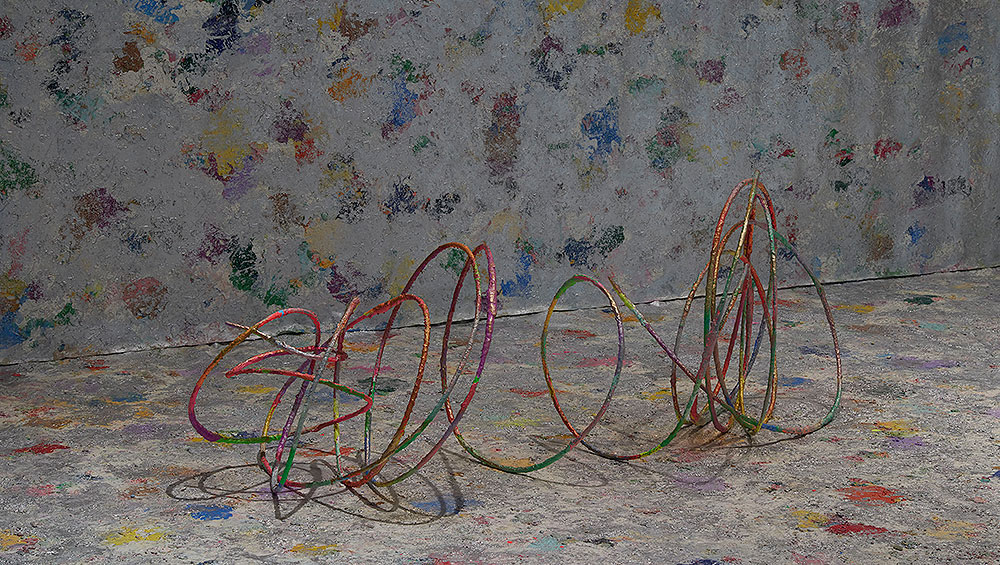 “Works of art exist simultaneously in two economies, a market economy and a gift economy. Only one of these is essential, however: a work of art can survive without the market, but where there is no gift there is no art.”1 When Lewis Hyde wrote these words in the late 1970s, Mit Jai Inn (b1960) was still aspiring to be a Buddhist monk. The likelihood that the Thai artist engaged with Hyde’s text is slim, yet, as this exhibition at Birmingham’s Ikon Gallery attests, he embraces the writer’s proposition that a true artwork is a “gift”, a carrier of the artist’s creative energy to viewers, who receive it as they do a gift. Mit goes further, however, sometimes giving away his kaleidoscopic paintings and sculptures to astonished visitors, who become participants in a practice celebrated for its spirit of sharing, collaboration and generosity.

Dreamworld is Mit’s first museum show in Europe. Despite being widely exhibited across south-east Asia, international attention has come relatively late for the artist, not least because, for many years, he eschewed such recognition. Working anonymously, he produced ephemeral installations in Buddhist temples and other public spaces. Indeed, his work is steeped in Buddhist philosophy, particularly the doctrine of Karma and the importance of circulating positivity through one’s actions. To that end, this exhibition is a deliberately uplifting affair, characterised by a playful, participatory approach. 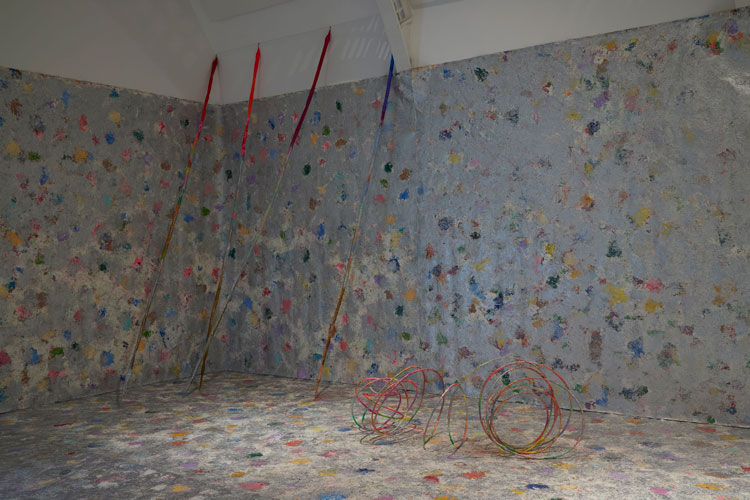 Mit invites you to enter his work from the very beginning. Midland’s Dwelling (2021) sees the gallery’s floor and walls covered by canvas that has been smothered with thick silver paint and variegated splodges, in a technique the artist refers to as “embalming”. But this is a living artwork which, through visitor interaction, is never complete: footprints, dirt and scuffs are continually added to the work as visitors traipse across the paint-splattered floor. Sculptural elements are also present; spear-like forms rest against one wall and a painted metal coil sits on the floor. Made with students at Birmingham School of Art, they reflect the influence of Franz West, for whom Mit worked as a studio assistant between 1988 and 1992 while living in Austria. They also refer to Buddhist cosmology, conceived as tools for performing some kind of ritualistic healing for our world-weary spirits, though how they might be used is left for viewers to determine.

The lightness of Mit’s candy-coloured paintings and sculptures belie a weightier political dimension. Growing republican sentiment in Thailand has led to protests calling for the abdication of King Maha Vajiralongkorn, whose legitimacy is increasingly questioned. Mit, a committed republican with profound concerns for his country’s future, has participated in many demonstrations and, while not obvious to the casual observer, an activist intent runs through his practice, from his use of colour (he refers to himself as a “red-shirt artist”), to his embalming painting technique (Thai royalty are traditionally embalmed after death), and recent exhibition titles such as The King and I at TKG+ in Taipei, and Royal Marketplace at Rossi & Rossi in Hong Kong. 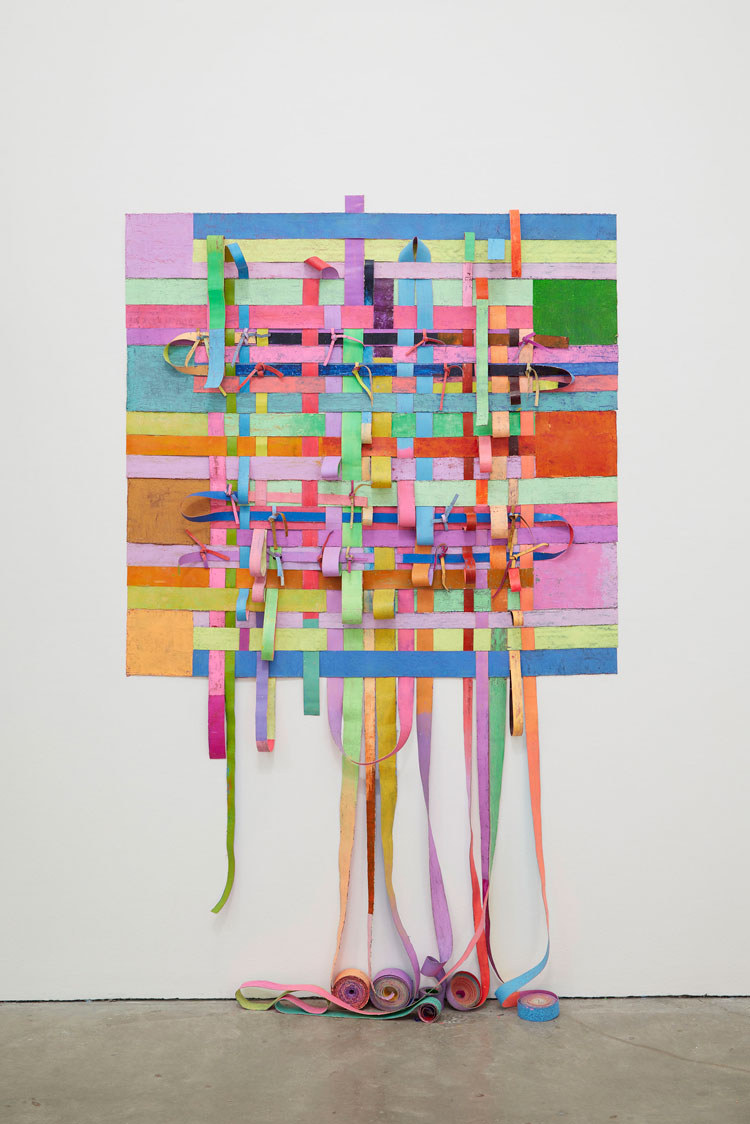 Formed from six layers of canvas, Mit’s trademark substrata are stiff enough to not require a stretcher but pliable enough to be folded and manipulated. In the wall-mounted work Patch Work 2 (2019), variegated strips of the material are woven into a quilt-like grid. Snaking, looping and sometimes dangling on the floor, these painted ribbons disrupt the revered geometry of the modernist grid. 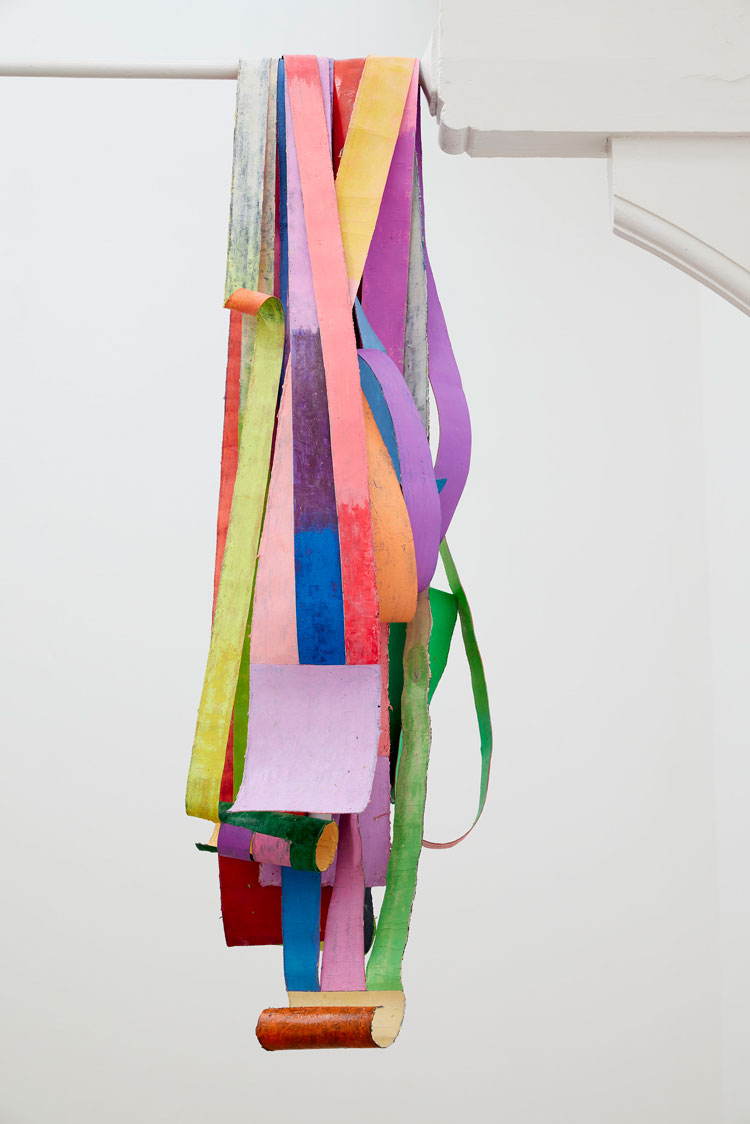 Nearby, in Loops (2019), more strips of canvas hang from a roof truss, alluding to the use of ribbons in Thai culture, from sacred traditions to recent protests where ribbons were tied to prison gates in Bangkok during a protest demanding the release of political activists. 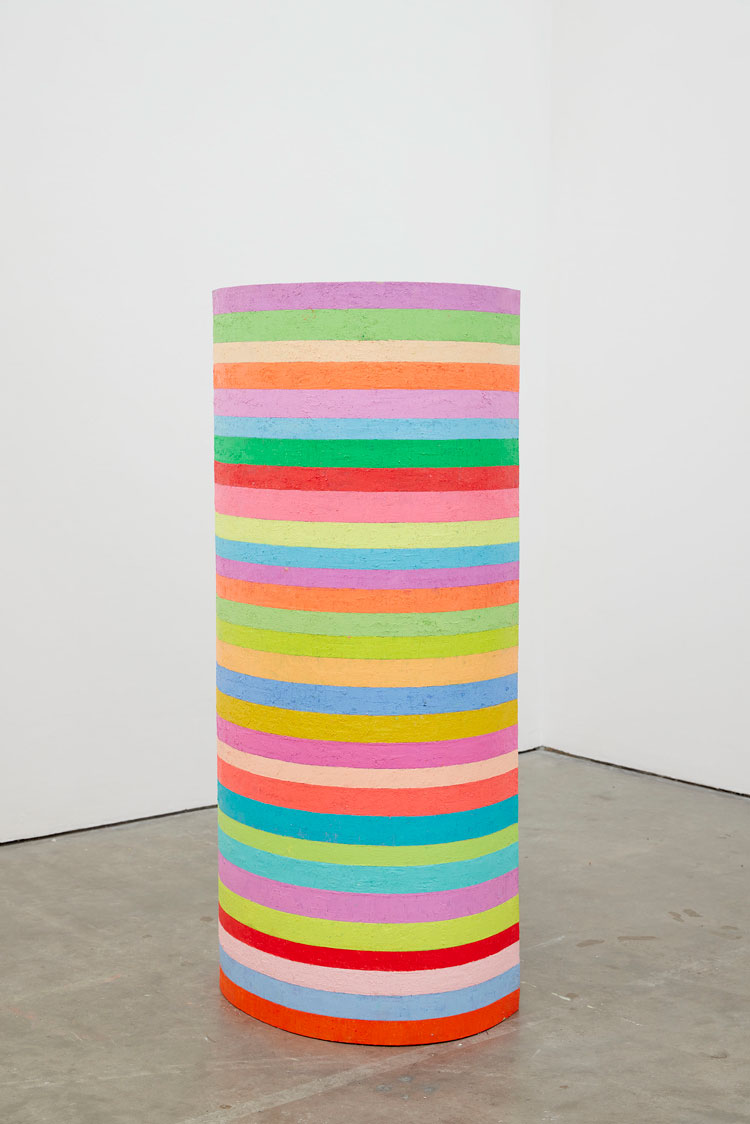 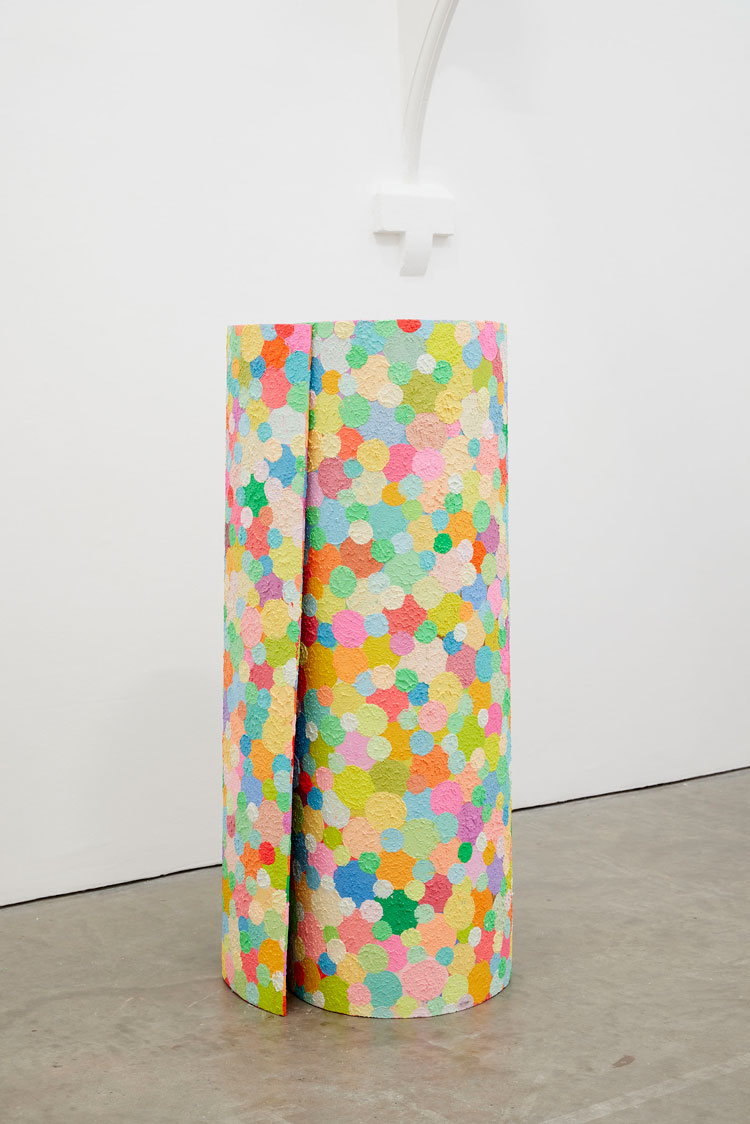 Mit’s brand of expanded painting owes as much to Giuseppe Pinot-Gallizio’s industrial paintings of the 1950s and Sam Gilliam’s draped canvases of the 1960s as it does to his Buddhist roots. His emblematic Scrolls series (1987-ongoing), in which colourful painted rolls of canvas stand upright like figures, fuse eastern scroll painting and western canvas painting, finding new forms and subverting both traditions. Two are included here; painted on both sides, each is an inversion of the other, with saccharin spots and deckchair stripes respectively. 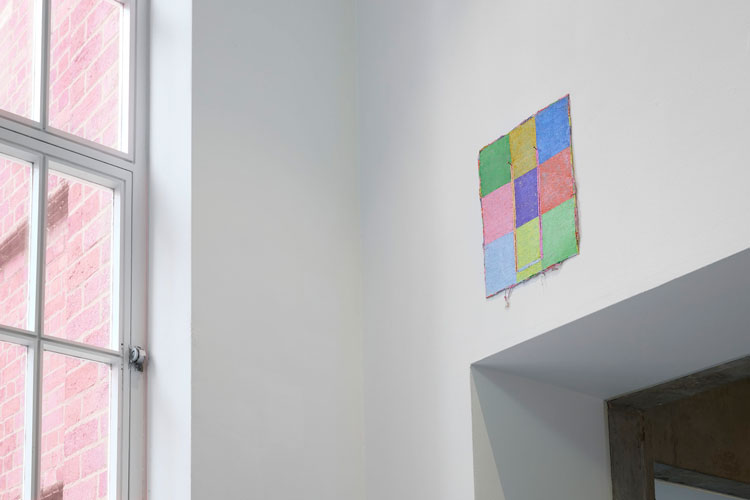 Dotted around Ikon’s galleries and foyer are Mit’s small Dream Works paintings (1999-2021), from which the exhibition derives its title. Characterised by vibrantly coloured squares and rectangles, each one contains internal slits, allowing them to be curved, looped or hung in various configurations. The series, which started on the eve of the new millennium, is said to embody Mit’s vision of art as a utopian dream. Yet, as anyone who remembers the anxieties of that period will attest, utopian dreams are often countered by dystopian ones. 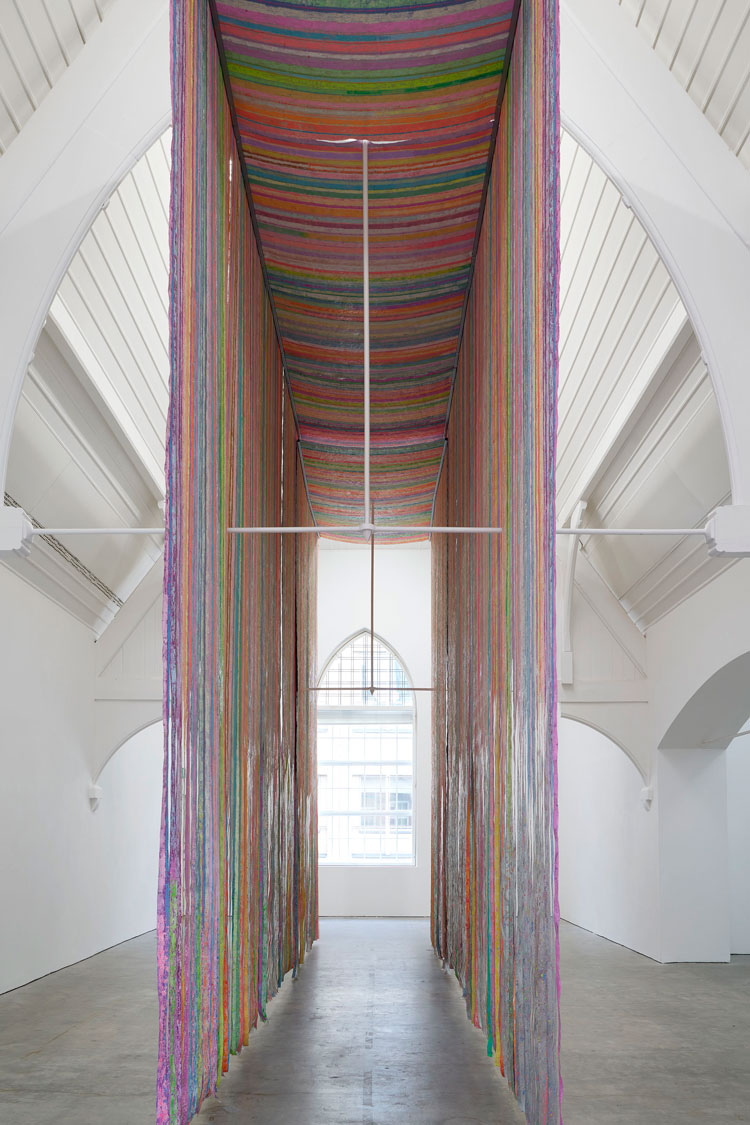 Throughout this show, Mit challenges notions of what painting, sculpture and, indeed, an exhibition might be. We are encouraged to move around his works, touch them, even inhabit them. All three are possible in the huge hanging painting Dream Tunnel (2021), in which large pieces of striated canvas suspended from the ceiling form a walk-through tunnel. Inside, a psychedelic explosion of colour leads you towards the light of the gallery’s windows, while outside, thick silver paint references the Tai Khun, a northern Thai ethnic group whose people traditionally worked as silversmiths in the royal court. This is a space where the political meets the spiritual, conveying Mit’s longing for the light of peace and justice to overcome the world’s darkness. It is, as he puts it, a tool for “cleansing, stagnant or wounded energies”. 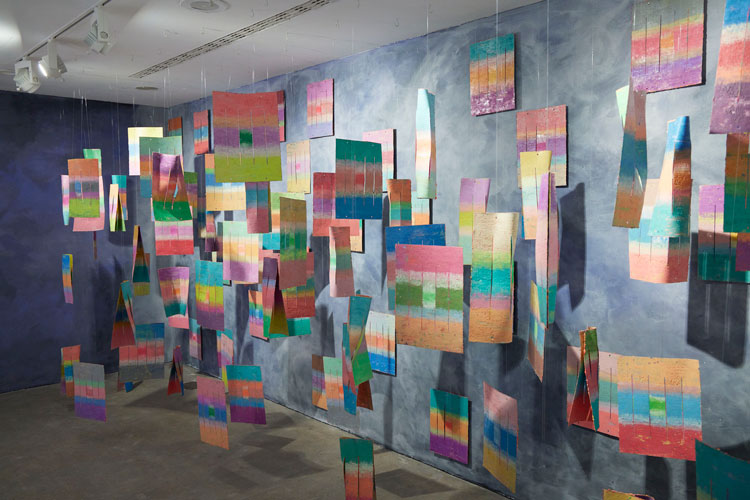 The most remarkable aspect of Dreamworld is that you can walk out of it with a piece of Mit’s art. #dreammantra (2021) is a participatory work in which viewers follow a written instruction before helping themselves to a double-sided canvas or painted wire sculpture. A polaroid photograph is taken of their chosen artwork, captioned with the recipient’s social media handle and left in the gallery. There is something exhilarating about taking home a piece of the exhibition; not only do you become the owner of an original artwork, you also partake in a rebellious gesture reflecting Mit’s distaste for the commercial art world. In Buddhism, “dāna” is the ancient practice of cultivating generosity and Mit’s art and life are saturated with it. While his freebies will certainly be treasured by their new owners, the greater gift is found in the experiential nature of his magnanimous practice. 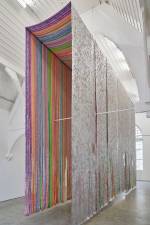 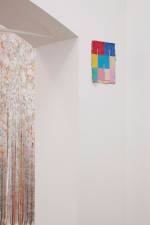