David Nash – interview: ‘The world of nature, the environment, weather, time and space is so rich, you have to engage with it’

David Nash – interview: ‘The world of nature, the environment, weather, time and space is so rich, you have to engage with it’

The Welsh-based land artist talks of his early years, the evolution of his process, the importance of dialogue with materials and the need for his work to communicate the spirit and materials of its place

As a young art graduate, David Nash (b1945) retreated to the former slate-mining town of Blaenau Ffestiniog in north Wales so that he could live as cheaply as possible while making work. But the landscape of Blaenau, circled by mountains and forests and rimmed with the black waste material from its slate-mining heyday, helped to shape Nash into the leading land-art practitioner he has become. It is here that he learned to allow the process of making or growing art from newly felled or living trees to dictate the form and pace of his work, which can take 20 years or more to evolve.

One of his key evolutionary pieces is Wooden Boulder (1978), a half-tonne sculpture hacked from the remnants of a rotting oak tree and then followed on its 15-mile trajectory down the valley, as the elements have moved it (with as little human intervention as possible) through field, stream and river, over 35 years. Ash Dome is also a signature slow-growth work, a circle of ash saplings that he planted in 1977, intending it to reach its optimum form in 2000, as a memorial to the millennium, which in that 70s era dominated by the cold war, oil crises and nuclear threats, some doubted we would see. He devised this work, he says, “to answer a question about how to have an outdoor sculpture that would sustain spontaneity, be seasonal and of its place”.

His commitment to making work that is “of its place”, in spirit and material, has taken him to the US, Australia, Korea, Japan, Spain, Holland and France, completing commissions using local wood, often made at its source. In the meantime, he embedded himself further into the Blaenau community by buying a magnificent disused Methodist Calvinist chapel, the Capel Rhiw, at a knockdown price – saving it from demolition. Its scale allowed him to convert part of it into a home for his growing family while also enjoying a studio space with the kind of dimensions, within the chapel, that few outside the wealthy London warehouse-owning artists could enjoy. Having space for an “indoor forest” of works has allowed him both to trial new, large pieces and store his growing family of sculptures, made in the UK and elsewhere.

After 50 years of working mainly in Wales, Nash was celebrated in 2018 with a major show at the National Museum Cardiff. Many of the pieces from that show – but also many more – are now on display at Eastbourne’s Towner Art Gallery. If there is one dominant theme that runs through the work it is of stewardship: of the material he works with, the place where it has grown, and his concern for the planet whose delicate ecosystem we have already tilted precariously out of balance. In the 1970s as now, he says: “I thought the most politically powerful statement to make as an artist was to engage with the environment. That was what we had to do as human beings.” 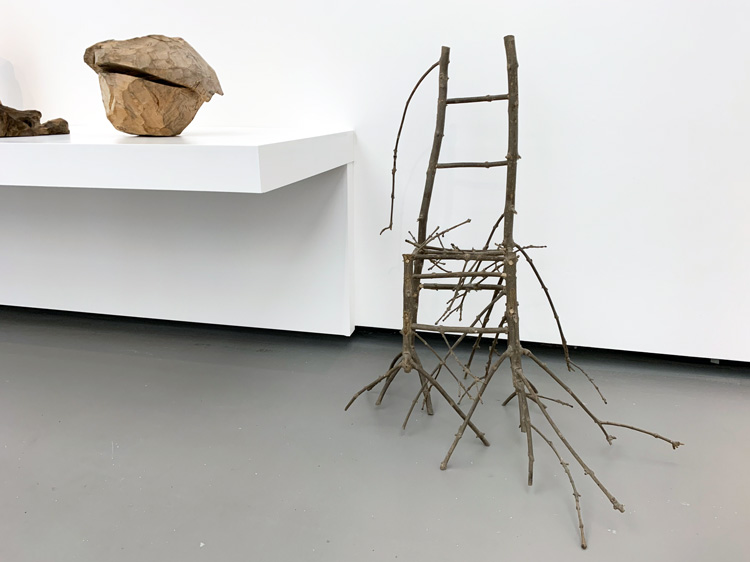 Nash studied at Kingston College of Art (1963-67), then at Chelsea (1969-70). His first solo exhibitions were held in 1973, at the Queen Elizabeth Hall in York and Oriel gallery in Bangor. His international reputation was established with solo shows in 1980 at Elise Meyer Gallery, New York, and Galleria Cavallino, Venice. He has also featured in numerous group exhibitions, including The Condition of Sculpture (Hayward Gallery, 1975), British Art Now: An American Perspective (Solomon R Guggenheim Museum, New York 1980), and Here and Now: Twenty-five Years of British Sculpture from 1970 to the Present (Serpentine Gallery, London 1995). He was elected a Royal Academician in 1999, and is represented by Annely Juda Fine Art, London; Galerie LeLong, Paris, Zurich and New York; Galerij S65, Aalst, Belgium; Nishimura Gallery, Tokyo; and Haines Gallery, San Francisco.