A trail-blazing artist, largely lost from sight, is brought back into the limelight in this excellent exhibition, full of sunsets, poppies and crashing waves 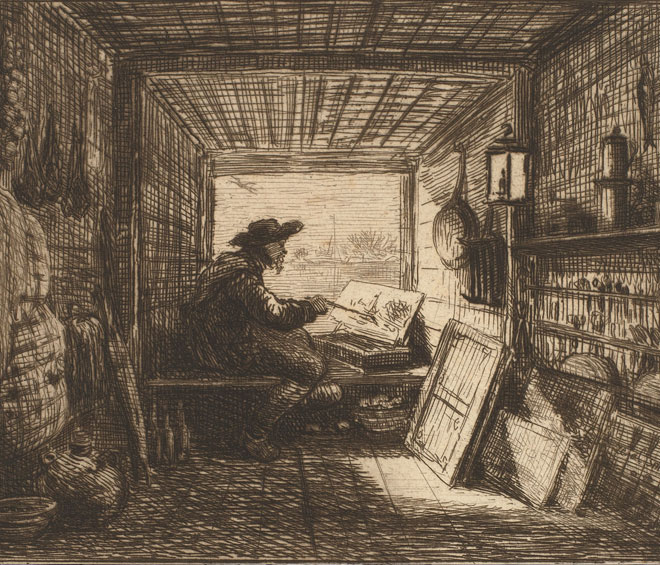 Daubigny, Monet, Van Gogh. You might be forgiven for not immediately rushing to see this exhibition on the strength of its protagonist alone. The names Monet and Van Gogh draw a crowd, but Daubigny, it seems, has been largely forgotten in recent years. Part of the reasoning behind this touring exhibition – already shown at the Taft Museum, Cincinnati, and the National Galleries of Scotland, Edinburgh – is to redress this error, since, in the 19th century itself, Charles-François Daubigny (1817-1878) was not only one of the best-known artists in France, but one of the most successful and influential. His pioneering and innovative use of impasto techniques, the palette knife, and a sketchy application of broad brushstrokes of paint, along with his enjoyment of painting en plein air, broke with salon tradition and paved the way for the younger generation of impressionists.

When he began painting in the 1830s, Daubigny was a far more traditional landscape painter, who attracted critical acclaim at the annual salon with his views of rural and river scenery, but by the time of his (with hindsight) breakthrough painting, Banks of the Oise (1859) – now considered a masterpiece of realism and observation – his style had changed quite radically. The sheer degree of realism, coupled with the fact that the work wasn’t smoothly finished, shocked many contemporary critics, while others, including Charles Baudelaire and Émile Zola, lauded him as “the new painter of the impression”. Keen to intensify the experience of being in the middle of nature, Daubigny painted scenes head on and used a hallmark wide-format canvas, previously reserved for more historical genres, not landscapes.

The exhibition, co-curated by Maite van Dijk and Nienke Bakker of the Van Gogh Museum, with the aid of the Taft Museum’s Daubigny expert, Dr Lynne Ambrosini, is both a monographic show of Daubigny himself, with 38 paintings comprising half the works on display, including major loans of salon paintings and tiny oil sketches, but also seeks to put him in context alongside the artists for whom he was important.

The young impressionists’ work was repeatedly rejected by the salon for being too sketchy and lacking detail, until, that is, Daubigny’s presence on the jury for the salon of 1868, when he readily accepted a large number of works by this new generation, leading to that year’s being dubbed “Le salon des jeunes”. By advocating for these younger painters, however, Daubigny was helping himself as much as them, establishing himself as part of this up-and-coming generation, rather than as a fading member of the previous one.

The downstairs gallery of the exhibition introduces the friendships and bi-directional influences of Daubigny and some of the impressionists in the 1860s, as well as during their time in London during the Franco-Prussian war, when the collaborations with dealer-extraordinaire Paul Durand-Ruel began. After the war, both Daubigny and Monet returned to Paris via the Netherlands, and Daubigny is noted to have said: “I am rushing back to Paris so I can try to apply to canvas the excellent lessons learned in Holland”, significant not least since it disproves the often touted myth that Daubigny always painted en plein air. While certainly believing in painting outdoors when possible, he equally made sketches aplenty to take back to his studio and work up. Indeed, he often reworked paintings multiple times over a number of years, as infrared scans showing different dates on one and the same piece evidence.

Prior to the war, in 1857, Daubigny had had a floating studio built on a boat, a semi-recreation of which sits in the exhibition, accompanied by some quick-time films of painted sketches coming to life. The boat provided living quarters, meagre storage space, and an area from which to paint out of doors. The paintings he made on the Seine, the Marne and, especially, the Oise, are some of his most celebrated, and a series of etchings, 15 of which were reproduced in a printed album, helped him out on the commercial front. After the war, Monet, inspired by Daubigny, also had a studio boat constructed. River scenes by both artists are hung side by side in the exhibition, inviting viewers to compare and contrast and, significantly, see how neither one was purely innovator or copier, but how their styles continued to influence one another throughout their friendship. Seascapes, sunsets and clouds can also be enjoyed, including a series of three of Daubigny’s sunsets at Villerville, getting gradually freer and freer in style, and his energetic crashing waves, breaking in crisp white crests, on the rocks, in Seascape, Saint-Guénolé, Penmarc’h, Brittany (c1867). His clouds are also simply superb, perfectly capturing their lightness and fluffiness, with differently coloured patches of sunlight bursting through at intervals. “There is nothing like working in the nature where one truly enjoys being. Then the paintings show the effects of one’s inner life and the sweet sensations one feels there,” said Daubigny in 1872, and this is more than apparent in his emotive painting.

In the upstairs galleries, Van Gogh also enters the mix and there are some beautiful hangs of three paintings of vibrantly red poppy fields (one each by Daubigny, Monet and Van Gogh) and various trees covered in gentle daubs of white blossom. Apple Blossoms (1873) and Orchard in Blossom (1874) are two stunning late examples by Daubigny, showing his loose brush work combined with minute detail of a couple embracing under a tree, a ruddy-faced farmer in the bushes, a cow, and bonneted girls chatting in the shade – embellishments not found in the counterparts by Monet and Van Gogh.

As a dedicated Van Gogh fan, this upper floor is certainly my favourite section, and the Dutch artist’s works do, for me, overshadow both Daubigny’s and Monet’s, but it is clear that Van Gogh was an equally ardent fan of Daubigny, and he often wrote about him in his letters. He spent the final 70 days of his life in Auvers, and, immediately on his arrival, visited Daubigny’s house, and his widow, and went on to make three paintings of the garden, on a canvas of Daubigny’s preferred panoramic format.

Exactly why Daubigny dropped out of favour is an unanswered question, although van Dijk suggests there is an art historic wont to forget what went before, when a new trend sets in. The impressionists and post-impressionists became successful, and Monet, Van Gogh and their contemporaries began using paint in a much more expressive way, making Daubigny and his experimental, loose strokes seem traditional by comparison. Indeed, they were, but Daubigny was nevertheless an important link in the chain, blazing a trail for this younger generation, and his work is more than worthy of being remembered.