Damien Hirst: Treasures from the Wreck of the Unbelievable

Damien Hirst: Treasures from the Wreck of the Unbelievable

The YBA’s watery comeback dazzles with its extravagance, but the audacity of Hirst’s exhibition only goes so far

In the atrium of Venice’s Palazzo Grassi stands an 18-metre tall statue of a headless titan, so prodigious that its installation required the temporary removal of the palace’s roof – this is Demon with Bowl, the colossal centrepiece of Damien Hirst’s Treasures from the Wreck of the Unbelievable. Made from resin coated to appear bronze and encrusted with aquatic debris, the sculpture’s sheer monumentality is exhilarating. Its dread head lies adjacent, and identifies it as a comical over-enlargement of William Blake’s The Ghost of a Flea (c1819-20). After dipping one’s toe into some of the more tepid exhibits in the Venice Biennale’s official exhibition, Viva Arte Viva, Treasures’ audacity comes as a bracing plunge pool. 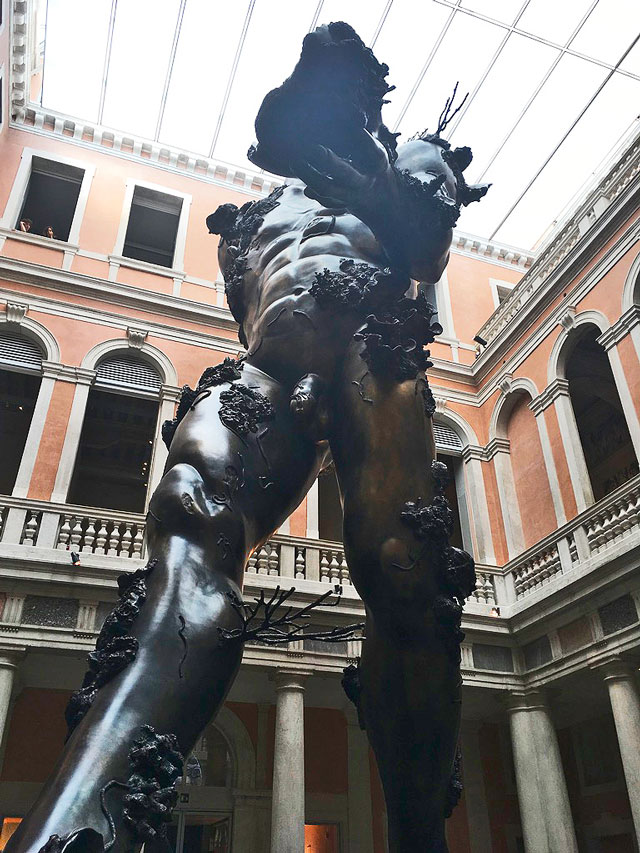 Treasures abounds with references. Pitched as the result of an archaeological recovery from a legendary shipwreck, it sees the 52-year-old Hirst fuse mythologies from at least a dozen ancient civilisations with a cascade of art historical and pop cultural references. Albrecht Dürer’s Praying Hands (1508) are borne by a Buddha, while Caravaggio’s Medusa (1596) is given 3D form in smoothly cut malachite. Four fertility goddesses are edited into a photograph of an early surrealist exhibition. An enormous blue-painted bronze depiction of Andromeda sees her about to be ravaged by both a serpentine Cetus and a toothy Jaws, and the remaining foot of a lost statue of Apollo is climbed by the Vacanti mouse. With room after room of faux ancient coins and pseudo-Renaissance drawings, one gets the sense that Hirst is cultivating his own take on the British Museum. 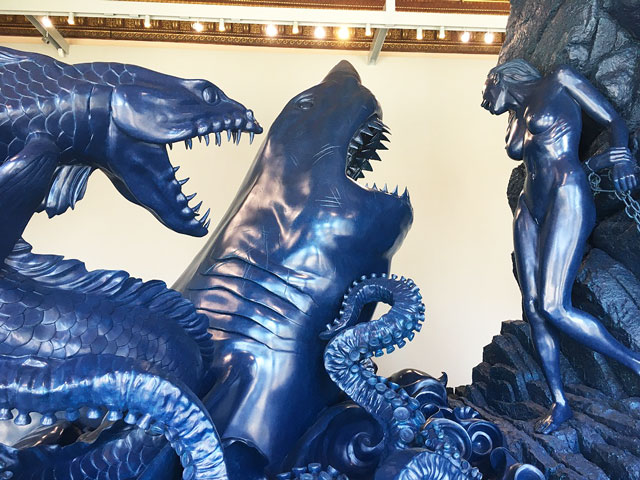 Treasures is far from a slight return. The culmination of around a decade’s labours – and, if the artist is to be believed, a personal investment of  – the show spans 54,000 sq ft (5,000 sq metres) in the Grassi and the Punta della Dogana, the two Venice venues operated by the François Pinault Foundation. It contains 189 large objects, the majority of them sculptural or large lightbox-mounted photographs, and 21 cabinets of smaller items. Each work exists as three different versions: a coral-coated version from the depths, an allegedly restored version and a modern museum reproduction. A significant team of curators, designers and fabricators are credited in the programme. Before its opening, the exhibition built up the sort of hype more associated with a film or record release. This would be an attempted comeback that could either soar or sink, the last throw of the dice for an artist who seems increasingly out of step.

Hirst’s career has experienced some remarkable ups and downs in recent years. In 2008, his auction Beautiful Inside My Head Forever at Sotheby’s smashed records for a single artist sale. The same day, Wall Street bank Lehman Brothers collapsed and triggered the financial crisis. Hirst became a latter-day Nero, cashing in while the global economy burned. As the times became more straitened, Hirst’s blue-chip bling became a byword for kitschy excess and a decadent conception of contemporary art distant from the grim realities of the world. When he then tried to reinvent himself as a still-life painter, he instead became Icarus, punished for presumption with savage reviews. Last year, a group of scientists (wrongly) claimed that his formaldehyde structures were emanating cancerous fumes. It provided a perfect analogy for the trajectory of his career, the once-vaunted revealed to be toxic.

If Hirst’s painting phase was a botched attempt to pay penitence for his perceived grandiloquence, Treasures from the Wreck of the Unbelievable flings such contrition into Davy Jones’s locker. Its outsize ambition has provoked outsize reactions. “We who lost faith in him look like fools for failing to believe,” gushes the Guardian’s Jonathan Jones. For Alastair Sooke of the Daily Telegraph it is “a spectacular bloated folly, an enormity that may prove the shipwreck of Hirst’s career”. No show has been more divisive in recent memory. 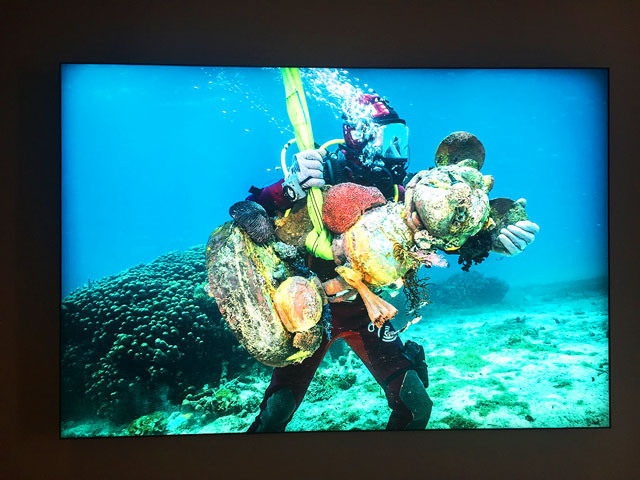 It doesn’t take long to see why. Stepping into the Punta della Dogana, one passes beneath the phrase “Somewhere between lies and truth lies the truth”, printed in gold on the wall. Is it a fitting proverb, accidental hokum or a deliberate deflation of profundity? Such musings apply just as much to the artworks themselves. The lightbox photographs, which each feature a team of divers retrieving an edited-in sculpture, walk a fine line between real and unreal: a recurring concern of Hirst’s work. In the first room, you are ambushed by a humongous take on a Mesoamerican calendar stone, a headless female nude and a truly ludicrous depiction of a sword-wielding Amazon atop a roaring bear. Soon after, the visitor comes across two titanic renditions of the Hindu goddess Kali battling a Malaysian-style Naga. It is a lot to take in. 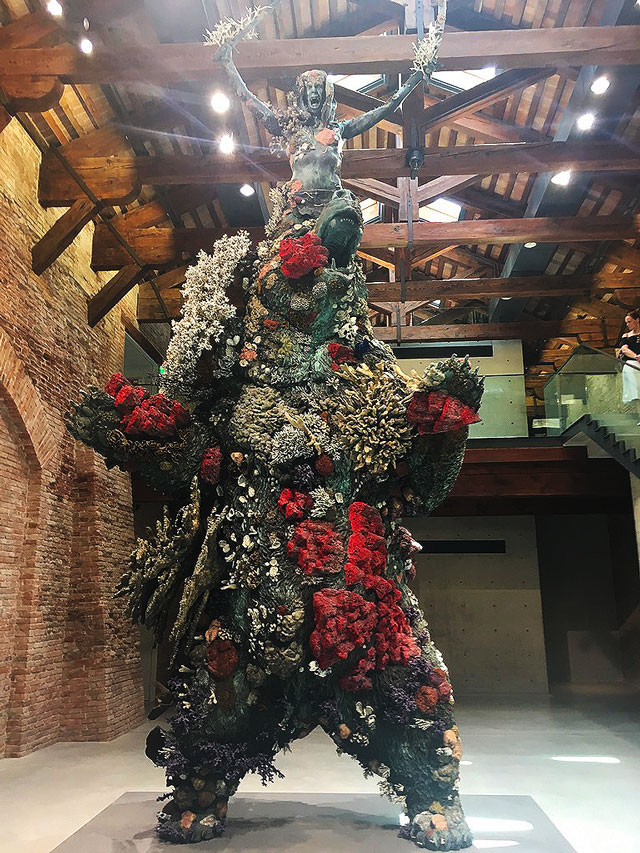 These sculptures impress with the immensity of their production and amuse with their bombast, but if you are not susceptible to Hirst’s brand of extravagant humour, they will sit empty. Treasures’ expansive size compounds this problem: after you have witnessed a handful of these pieces, further iterations stun with a diminished impact. A certain hollowness is perpetuated by the schlocky aesthetic, which sits somewhere between fantasy fan art, Elizabeth Taylor’s Cleopatra and the sort of overbearing kitsch last seen in Tate Britain’s 2015 exhibition Sculpture Victorious. Although produced in the finest materials – the marble comes from Carrara, for example – the garish designs render many of the works tawdry. 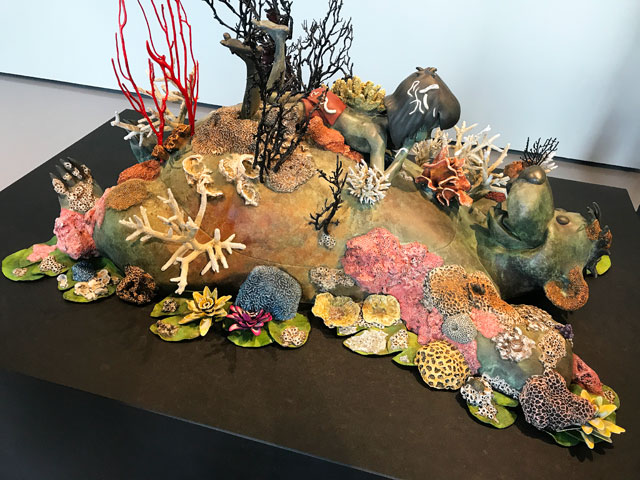 Storms brew with the most explicitly pop pieces. Mickey Mouse walks hand-in-hand with his creator, Mowgli tumbles with Baloo and the Aztec deity Quetzalcóatl is reincarnated as a golden Transformer. These works play on the worn juxtaposition between high and low without penetrating the matter. When Hirst’s idol Jeff Koons turned to old master painting and statuary with his Gazing Ball (2015-) series, his mirrored sapphire baubles invoked cosmic wonder and the replicated works felt like earnest tribute. This art-historical romp, on the other hand, feels transparent. Like the honeyed words of Goneril and Regan in the opening scene of King Lear, Hirst’s labours often amount to little more than sophistry. There is a void beneath the dazzle. 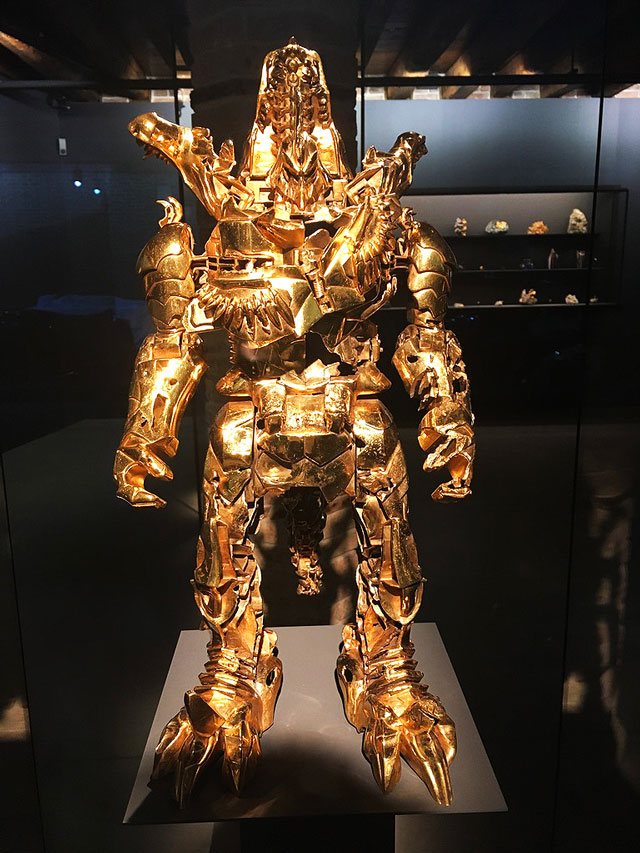 Dazzling would-be collectors, of course, is the show’s real function. Through the shaded windows of the Punta della Dogana, the lagoon is the green of dollar bills. From the minuscule to the mountainous, Hirst has essentially presented a one-stop shop for buyers, with a piece to suit the budget of every echelon of high-net-worth individual; reports say Hirst’s dealers are offering the objects for sale from $500,000 (£382,600) to $5m. And the show’s conceit plays to collector megalomania: if you can’t find an authentic Mycenaean statue of Bacchus on the market, why not buy a Hirst imitation and bolster your contemporary art cred? Inevitably, the profit will not trickle down to visitors: despite the support of the multibillionaire Pinault, the standard entry price for Treasures is €18 (£16), not much less than the gargantuan Biennale itself and about the same rate as a major museum exhibition in London. 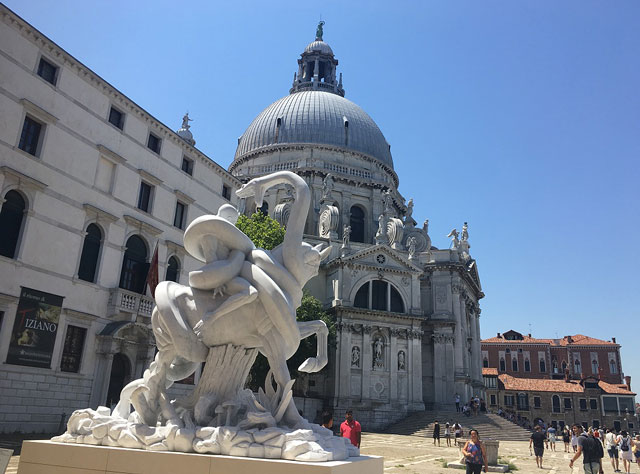 On leaving Treasures, two encounters stuck with me. Outside both the Punta della Dogana and the Palazzo Grassi, in marble and bronze respectively, are versions of The Fate of a Banished Man, an equestrian figure tangled up in a Laocoön-esque serpent. It looks like a particularly tasteless public monument from the Risorgimento. Stand too close, and you will trigger a recorded warning against touching private property. It is art conceived and installed with its buyer in mind. Upstairs at the Palazzo Grassi is a bronze entitled Bust of the Collector, depicting Hirst himself. Its countenance matches the frown, sneer and wrinkled lip of Shelley’s Ozymandias. Look on these works and despair. 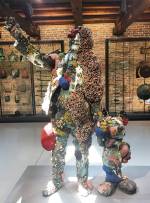 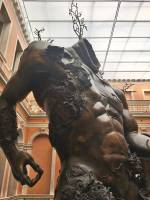 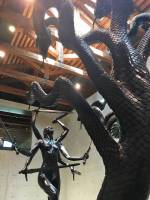 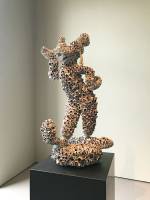 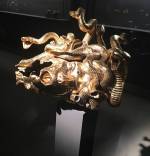