A great deal turns upon the evaluation of the authenticity and provenance of an art work. In today’s inflated art market, it can mean the difference of several millions of pounds, making a highly valued work worthless, or vice-versa. It can have profound consequences for collectors, especially professional gallery and museum staff responsible for institutional purchases. New or rejected attributions can also transform our perception of cultural history.

Research into the authenticity of art works has commonly taken two forms – extrinsic and intrinsic. Extrinsic enquiry looks to the examination of evidence external to the work itself, including documentation such as bills of sale, catalogues, inventories and letters. It can also take into account what we know of the historical circumstances of the work’s creation and life.

Intrinsic evidence arises from the direct study of the work itself, notably, in the past, the practice of examination by connoisseurs and historians who are particularly experienced in the period and area from which the work is presumed to arise. A practised eye, used to regular examination of hundreds of similar examples, can often depend upon a “feel” for the work of a particular artist, period or region.

In the 20th century the subjective appraisal of works by historians and connoisseurs has been overtaken by a completely new kind of intrinsic enquiry, namely the examination of works by means of processes such as chemical analysis, X-radiography, infrared reflectography and dendrochronology. These provide us with fairly reliable accounts of aspects such as the materials and pigments used, and the presence of underdrawing or pentimenti. Dendrochronology – the study of the wood grain resulting from tree-rings – can provide a helpful guide to the date and age of wooden panels.

This exhibition provides us with a valuable insight into the work that goes on in the back rooms and laboratories of the National Gallery. The emphasis is almost entirely upon the scientific examination and analysis of art works, although it provides some fascinating illustrations of the way that this evidence relates to and impacts upon the subjective judgements of individuals, including past staff and directors of the Gallery itself.

The exhibition traces the history of several case studies, leading to either the vindication of an original attribution or the rejection of the work as a forgery or fake. One such work is the Portrait Group, bought by the Gallery in 1923 as an Italian painting of the late 15th century. Even at the time of the purchase doubts were raised about the authenticity of the work, but rejected by the Gallery. The painting also withstood the more primitive scientific tests which were available at that time. However, these doubts never went away and by 1951 the Gallery itself admitted that the painting “appeared to be modern”. What sealed this revision in the evaluation of the painting was the intervention in 1960 of the highly respected historian of costume Stella Mary Newton. She was able to demonstrate that the garments worn by the subjects of the painting were “impossible of construction and inconsistent in date”. Male and female garments were intermixed, and one of the hats was a style popular in 1913!

It was suggested that the painting might be the work of the notorious Italian forger Icilio Federico Joni. An ironic aspect of the secretive forgery industry is that even here there appears to be a kind of “honour among thieves”, and Joni was indignant that inferior forgeries were sometimes wrongly attributed to him.

The exhibition makes it clear that in assessing the authenticity of an art work we must avoid simple binary judgements of true and false. In the pre-Romantic period there was a vast typology of art works which included works entirely by the hand of the Master, works partly by assistants and students, copies by the Master, copies from the workshop of the Master, and so on. Another of the case studies centres on An old man in an armchair, purchased 50 years ago as a Rembrandt but now demoted to “Follower of Rembrandt”. Scientific and circumstantial evidence suggests that it is indeed contemporaneous with Rembrandt and his milieu, but more likely to be by one of his many students and followers. It is nevertheless a fine and moving painting, justifying its place on the walls of the National Gallery; something that cannot be said of the ersatz Portrait Group discussed above.

For anyone fortunate enough to have seen the recent excellent exhibition on forgeries at the Victoria and Albert Museum, sponsored jointly with the Metropolitan Police, this exhibition provides a valuable complement. One phenomenon featured in the V&A show which is almost entirely absent from the present exhibition is the practice of re-creating a forgery of a lost work. One of the most notorious forgers of recent years began by identifying a work which had been thoroughly documented, but was now missing. This was followed by meticulous research into the nature and appearance of the lost work and the falsification of the missing object together with related documents, such as letters and bills of sale. These were then taken with the forgery to a museum or gallery which would “recognise” the object with delight, the forger maintaining throughout an expression of wide-eyed innocence and surprise. The victims of this elaborate scam included the British Museum itself. The whole enterprise demanded not only the traditional skills of the forger, but acting ability which would justify an Olivier, not to mention the Queen’s Award for Industry! As for the poor gallery staff, I am reminded of the immortal words of John Milton:

Hast thou betrayed my credulous innocence
With vizor’d falsehood, and base forgery? 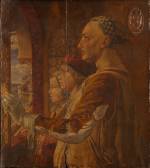 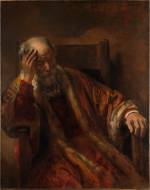 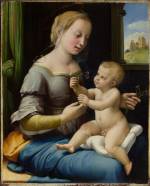 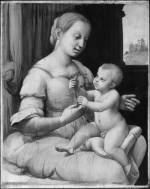 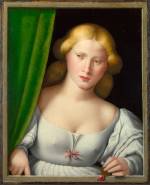 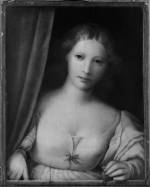