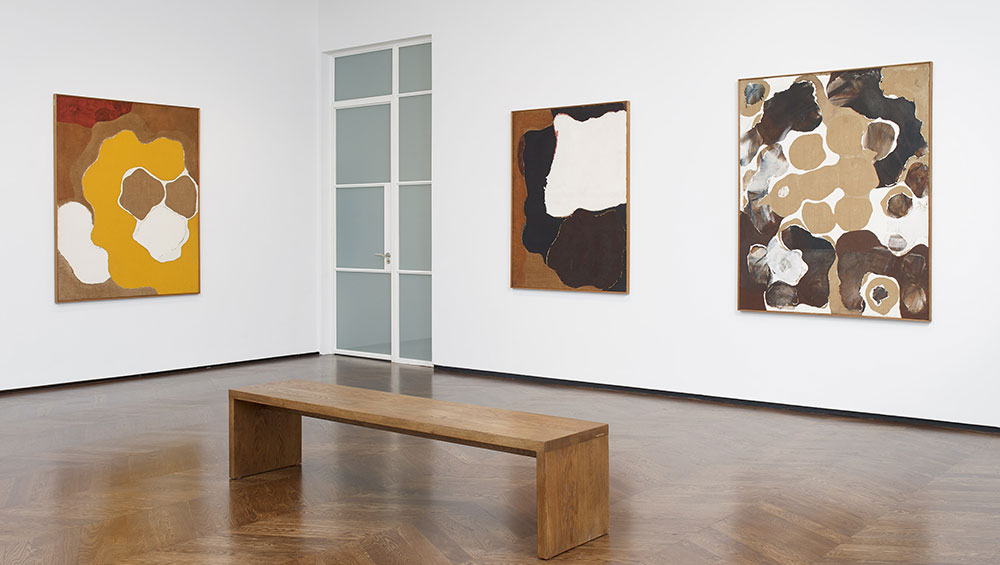 Lévy Gorvy, London
28 February – 25 April 2020 ((Due to the coronavirus, the gallery is temporarily closed until further notice)

Spare, elegant, precise: Chung Sang-Hwa’s enigmatic canvases may lack bombast, but don’t be fooled. To the patient viewer, these artworks reveal a peculiar, ossified landscape, sitting ambivalently between organic and geometric abstraction, built up with layer upon painstakingly applied layer of monochromatic paint. 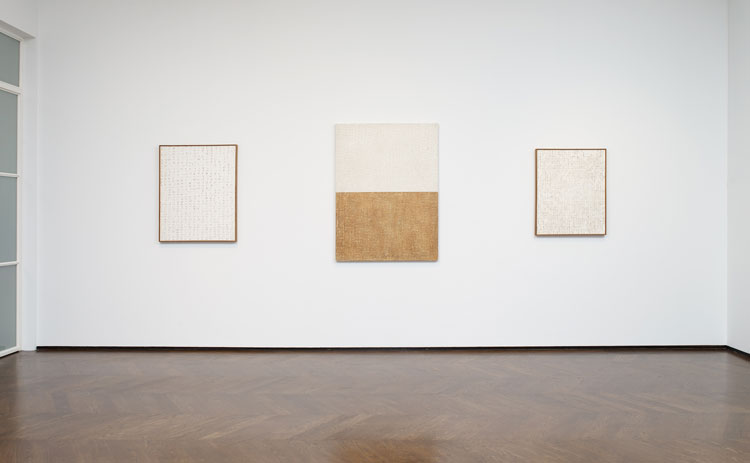 Chung (b1932) is regarded as a key figure in the South Korean Dansaekhwa movement, a loose grouping of abstract artists preoccupied with visual expression through tactile materials while using complex patterns that at once seem random and ordered. Chung, along with Park Seo-Bo, Lee Ufan and Yun Hyong-keun among others, emerged as a vanguard of Korean abstract painting during the 1960s and 70s. This modestly sized exhibition at Lévy Gorvy, comprising 11 works by Chung from the early and middle years of his career, seeks to trace the influence his contemporaries held over his developing practice, by combining his works with a selection by other relevant artists in the Lévy Gorvy stable. 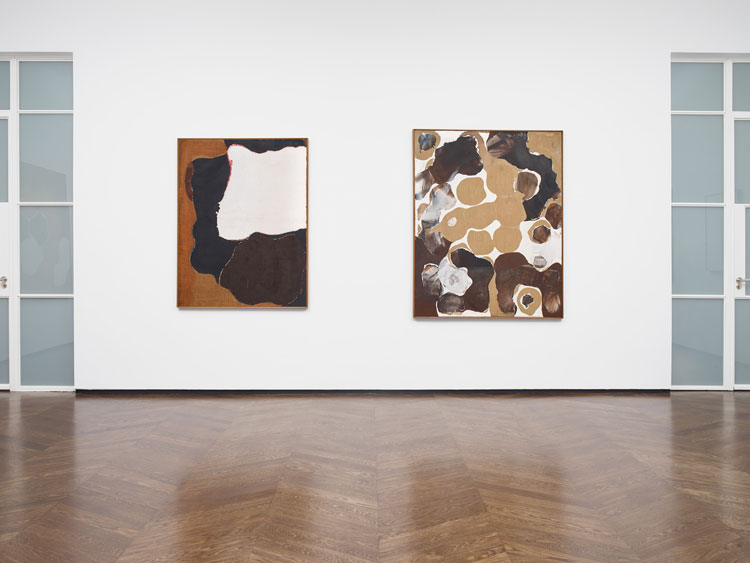 Following the ruinous destruction of the Korean war (1950-1953), Chung’s generation emerged ill at ease, surrounded by poverty, desolation and an unfamiliar political settlement. Korean informel was the dominant school at this time, an abstract style sharing with its European informel and abstract expressionist cousins an emphasis on gestures, emotive mark-making, improvisation and a bold colour palette. 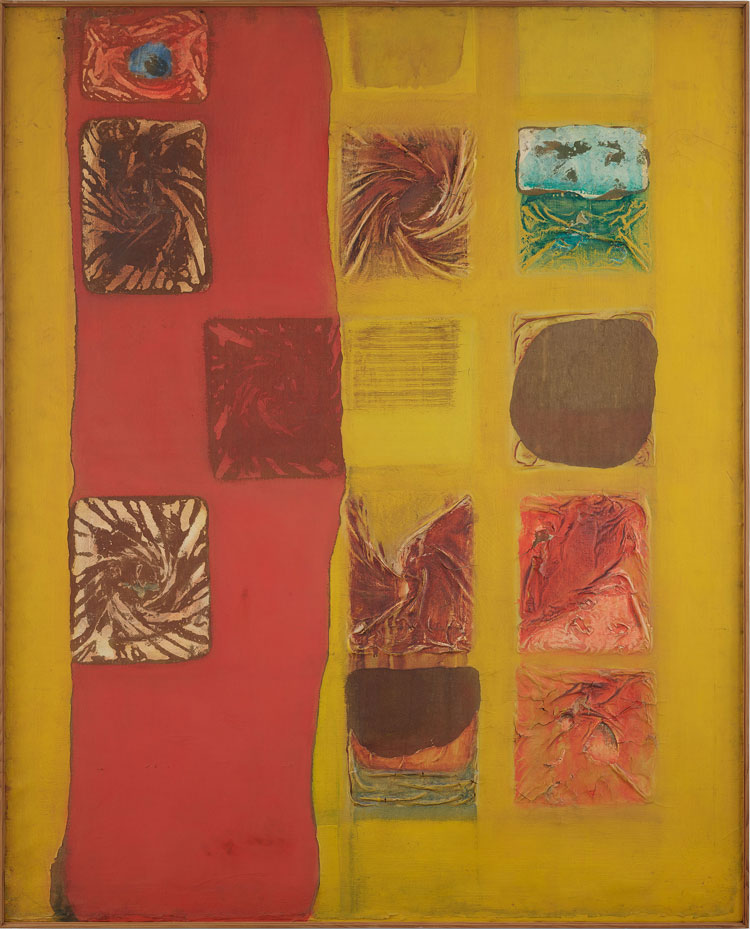 One of the earliest works on show, Work 65-2 (1965), typifies Chung’s output during this period: vivid colour blocks sit against an earthy background, dense accretions of paint, glue and kaolin clay are warped into buckled craters and swirling patterns. These early pieces show painting at the edge of something, as if disintegrating from age, heat, water damage or some other trauma.

These works are a marked difference from spartan grid paintings for which Chung has subsequently become better known. His travels at the end of the 60s offer potential missing links. Following a brief spell in Paris in 1967, he spent a longer sojourn in Kobe, Japan, where he became close to Jiro Yoshihara, Kazuo Shiraga and other artists associated with the avant garde gutai movement. These artists pioneered an arresting combination of performance art with plastic or sculptural painting, with Shiraga, in particular, known for his practice of suspending himself above his flat canvases and using his bare feet to make marks in the thick paint. The one work from Shiraga on display is a blast of liquid movement and colour, a welcome palate-cleanser from the warm, but muted tones favoured by Chung. Mannaka Tate no Blue (A18) (1964) by Tsuyoshi Maekawa is another gutai highlight, a mysterious cave-like scene ripped vertically, revealing a multilayered canvas diverging into violent peaks and troughs. 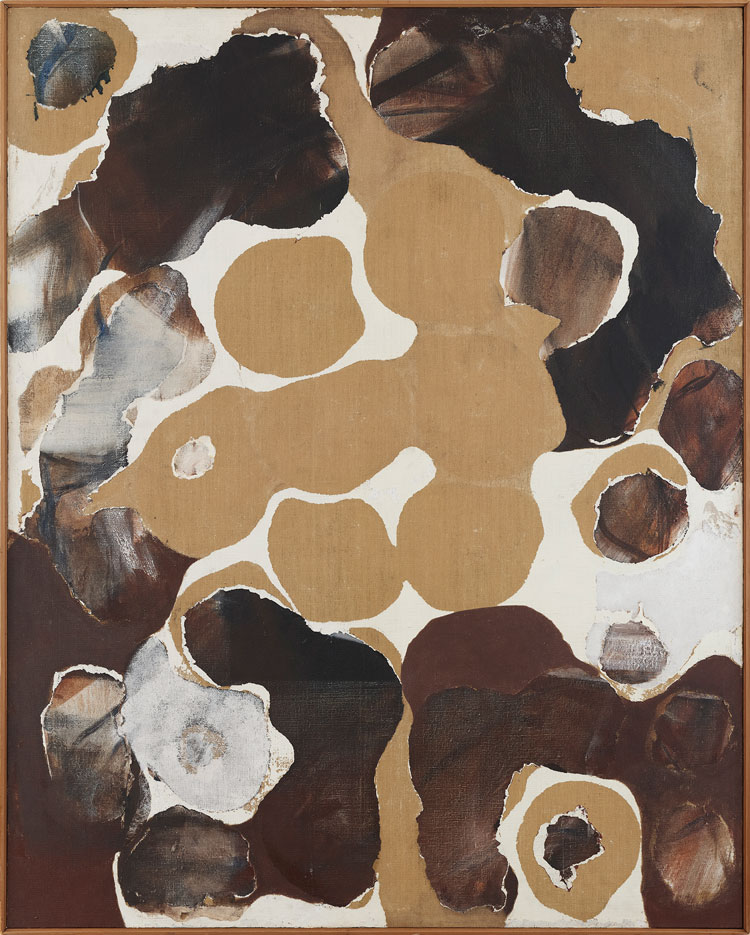 It is surprising, then, that Chung’s works from this period show a move towards tighter control of the paint’s texture, shape and structure. Artworks such as Work O-A (1971) and Work K-3 (1970) are serene worlds of warm creams and terracottas, off-kilter circular shapes shimmering in and out of focus. But there is more to these canvases than meets the eye – each has been created by meticulously applying and removing paint in a series of patterns, leaving a complex arrangement of interlocking circular shapes.

It is a technique that the artist would later refine in his monochrome grid works produced from the 70s onwards, of which there are several on display at Lévy Gorvy. For each artwork, Chung first covers the canvas in a mixture of kaolin clay, water and glue. Then, having drawn a linear grid on the reverse side, the artist folds the canvas along the gridlines, tearing off the clay mixture from the canvas and filling in the empty spaces with acrylic paint. It is an immensely work-intensive process, and that is part of the point. One gets the sense that the value in these works for the artist stems just as much from the meditative practice of their creation as from any contemplative bliss achieved from viewing the finished product.

These are paintings that speak in murmurs not shouts, and this can be a problem in a group exhibition format. Also featuring in this exhibition are a trio of playful works by Seung-Taek Lee, who bends and warps traditional craft materials in unexpected ways. Carol Rama, an Italian avant garde artist from Turin, stands out with Bricolage (1966), a splat of chromium paint and flecks of blood-red paint, beautiful and unsettling in equal measure. What these disparate artists all have in common is an abiding interest in plasticity, texture and the repurposing of non-traditional materials in new and creative ways. But it is difficult not to come away with a vague feeling of “so what?”. Excavationsis a welcome outing for an artist who is not often the subject of his own shows, and his middle period “circular” paintings are a definite highlight. However, the exhibition does not quite succeed in providing a cogent account of his middle years. You almost wish it had either half or double the gallery space to play with. 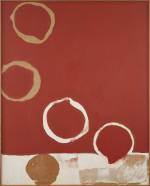