Using 2,000 balls of thread, Chiharu Shiota’s installation of white woollen webbing in the chapel at Yorkshire Sculpture Park drifts up from floor to ceiling, twisting around and drawing you in to the spirit of the place 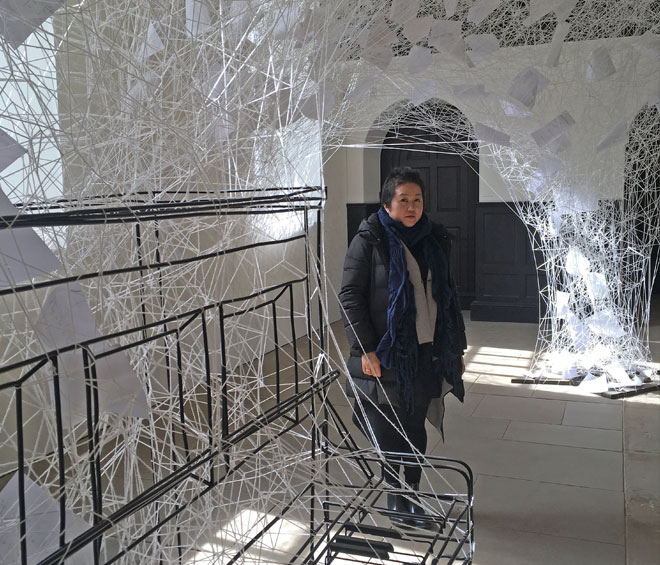 When Chiharu Shiota (b 1972, Osaka, Japan) started work on her installation in the Yorkshire Sculpture Park’s 18th-century chapel, in early March, the ground was blanketed in snow. While it slowly turned to slush and the green of the surrounding parkland emerged, the white woollen webbing of her installation was thickening, taking on a vaulting, cathedral-like form of its own, twisting around the windows, drifting up to the ceiling from its anchor points on the flagstone floor, secured by stone footplates apparently taken from the organ that used to live here.

The organ is a ghostly presence in the work. Photocopied pages taken from the YSP’s archives, of sheet music that was once played on it and programmes from concerts given, are strewn within the white webbing, like free-floating foliage – a spectral counterpart to the bare, black branches and twigs of the surrounding winter treescape; call and response, echoing the rhythm of services past. When asked why the threads chosen for this work are white – as opposed to her previous woven works, which are usually a crimson or black – Shiota says: “For purity. And death.” White is the colour of mourning in Japan, which seems appropriate, given the simple gravestones and marble memorial slabs embedded in the site. But it also represents renewal. 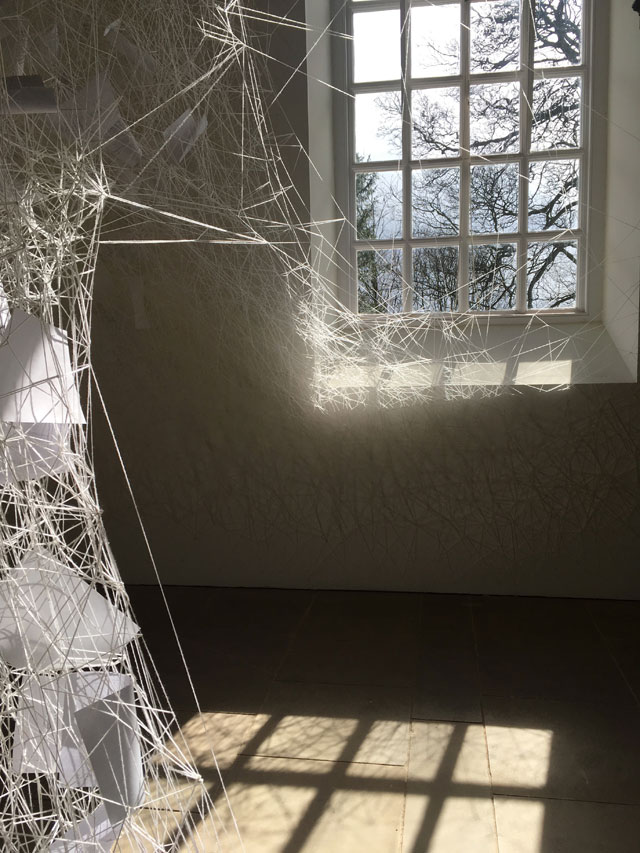 The first time Shiota saw the chapel, it was a classically overcast Yorkshire day, so the sunshine that is streaming through its arched windows when we visit the finished work is a bonus, casting slabs of light on to the flagstone floor and an ethereal luminescence over its temporary woollen occupant. Curator Helen Pheby first saw Shiota’s webbing installations in Berlin, where Shiota is now based, and didn’t know if Shiota would accept the commission. But when the artist saw the chapel, there was no hesitation. As Shiota says in an interview with Pheby in the accompanying publication: “Usually when it is a museum space, a white cube, it is like a blank canvas. I create something out of nothing. But the chapel … is a spiritual place. It has existed for hundreds of years and you can feel this when you enter it.” The songs sung, prayers and rituals – for births, marriages and deaths – are present in the building, she says, “the accumulated collective memory”. 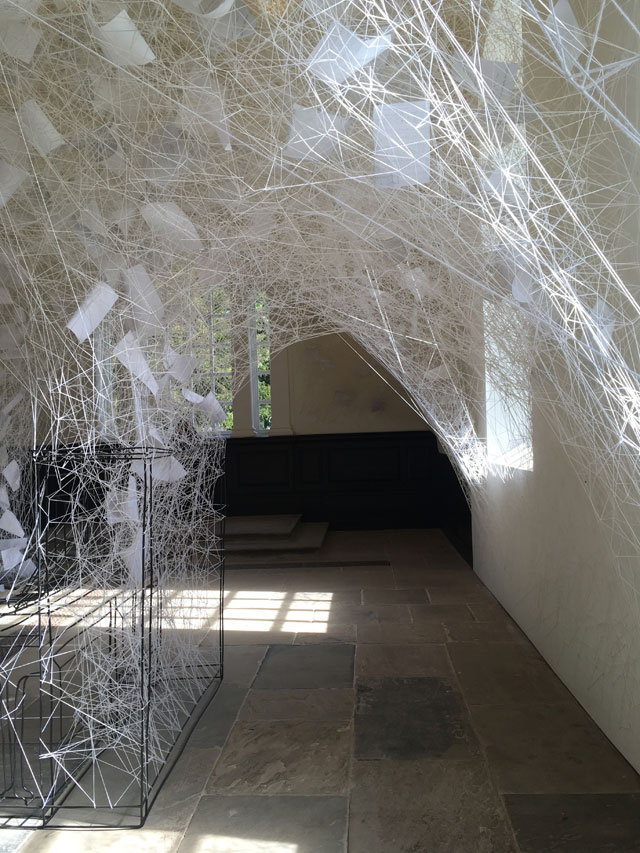 It took 12 people (herself, five assistants she brought from Berlin, and six assistants supplied by the YSP) 12 days to weave this installation, using 2,000 balls of white thread. From the first webbing work she made (Return to Consciousness, 1996, in Japan), she has never had a diagram or plan in her mind, she says. She works intuitively, responding to the space. Elsewhere (in an interview with Andrea Jahr), she calls her woven artworks “an expression of my own feelings”. I ask her what her feelings were in creating this piece, Beyond Time. She says: “Changing. Quiet and calm, but also exhausting – weaving never ends; at the beginning it looks like it is not enough, it will never be finished. Everything changes. Then you get the sense of fun and achievement.”

A steel sculpture whose outline evokes a piano but is definitively not a piano (made for the exhibition, but not by Shiota) stands at the centre of the chapel, the white webbing and paper sheets seeming to fly from its frame, upwards and out, like a cascade of silenced sound. The piano is a recurring theme in her work. When Shiota was nine years old, she saw a neighbour’s house destroyed by fire, with only the semi-ruined piano left standing. “The piano had lost all its function but it was even more beautiful than ever before. And I was overcome by silence when I saw it,” she tells Pheby. “A piano that cannot make a sound still carries the memory of the sound. I believe the silence is often stronger and more beautiful than any sound can be. The absence of something makes it stronger.” 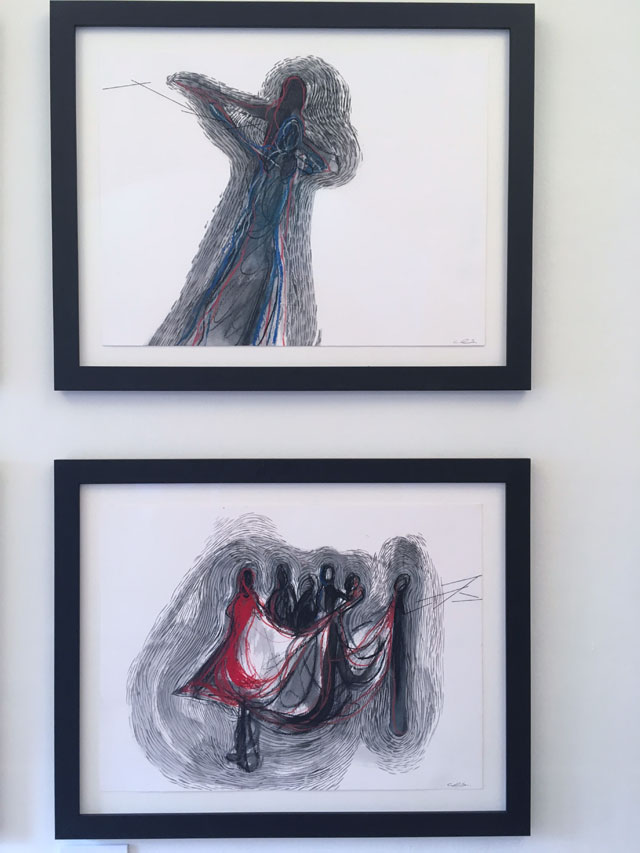 There are four new drawings in the upstairs balcony gallery, oil pastels and thread on paper, three made specifically for this show. In the Window, Talking, Dancing  and Red Coat (all 2018) are figurative, but Shiota’s people are like wraiths, outlined in black, animated by red, and surrounded by dense ribbons of grey, pulsing dashes, representing something mobile, active – a life force? After abandoning her early paintings for performance and sculpture, Shiota only took up drawing again in 2005, after a scare with – but successful recovery from – cancer. She tells Pheby: “Drawing has become a personal form of expression, like a diary. It helps me reflect and connect with my feelings.” In the Window has a central figure, her outline seemingly blurred or distorted – even penetrated – by the light pouring through the adjacent glass panels; ribbons of energy seem to flow around figure and window; human blending with architecture, united by a shared energetic force field. It seems as if Shiota is looking to express a third dimension to these two-dimensional renditions, using these lines to take the figures off the page and out into the world.

Nearby there is a properly three-dimensional bronze sculpture, Belonging (2017) – a new work and a new medium. A woman’s hand and forearm spoons into a man’s, both curled around that of a child. She tells Pheby: “Because much of my art is temporary and only remains as a memory in people’s mind, I wanted to create something that was more everlasting. The new sculpture Belonging is also informed by my understanding of the boundaries created between us by race, nationality, religion or language, but my deep belief that we are all connected.” 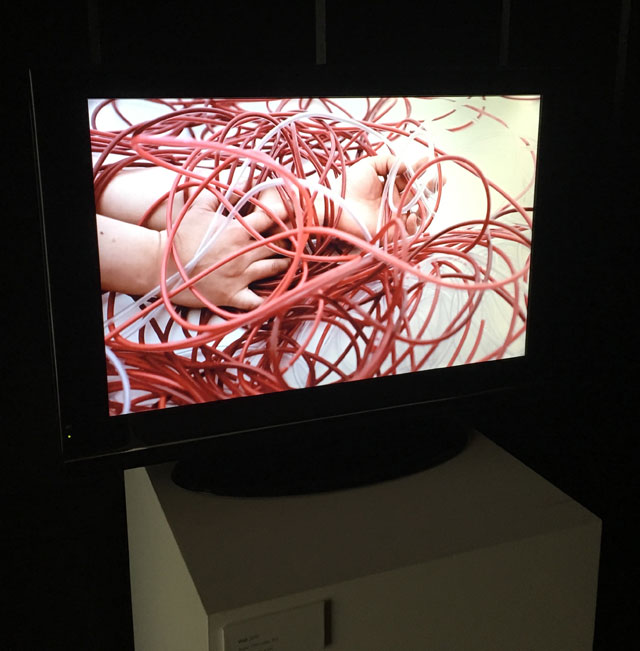 Connections beyond and boundaries around the body are also explored - more disquietingly but profoundly – in a 2010 filmed work placed in a small alcove on the ground floor. Wall (2010) has Shiota lying on her side, dressed in a huge tangle of seemingly intravenous wires, spilling across the screen, through which blood ebbs and flows; her limbs occasionally twitch or jolt, while a heartbeat pulses quietly in the background. As the sound reverberates around this simple but eloquent place of communion, the film seems to take on a new symbolism, with Shiota’s supine, filmed form and her tangle of “veins” becoming an animating organ at its heart. 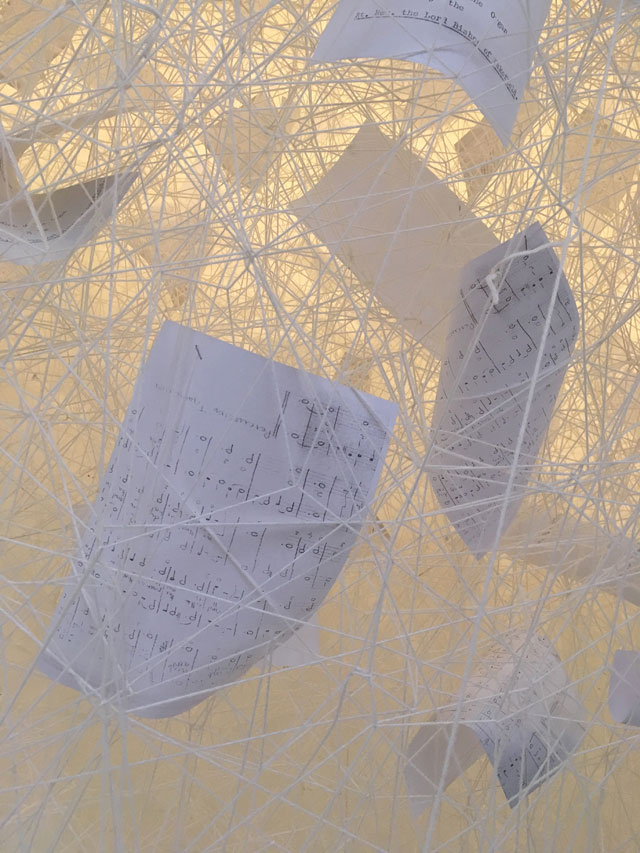 This work both consolidates and shifts beyond Shiota’s early work, in which her person was a critical, performative presence (her inspirations include her former teacher Marina Abramović and Cuban American artist Ana Mendieta), and moving towards a more universal preoccupation. With this installation she succeeds in connecting us to the spirit of the place, those who have occupied and may yet dwell in it; beyond time. 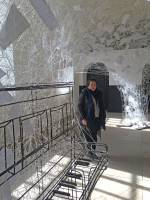