This exceptionally well-curated exhibition brings together four female artists, from a pivotal point in British social and art history, and explores how each, in her own way, challenged conventions and restrictions to become a successful painter 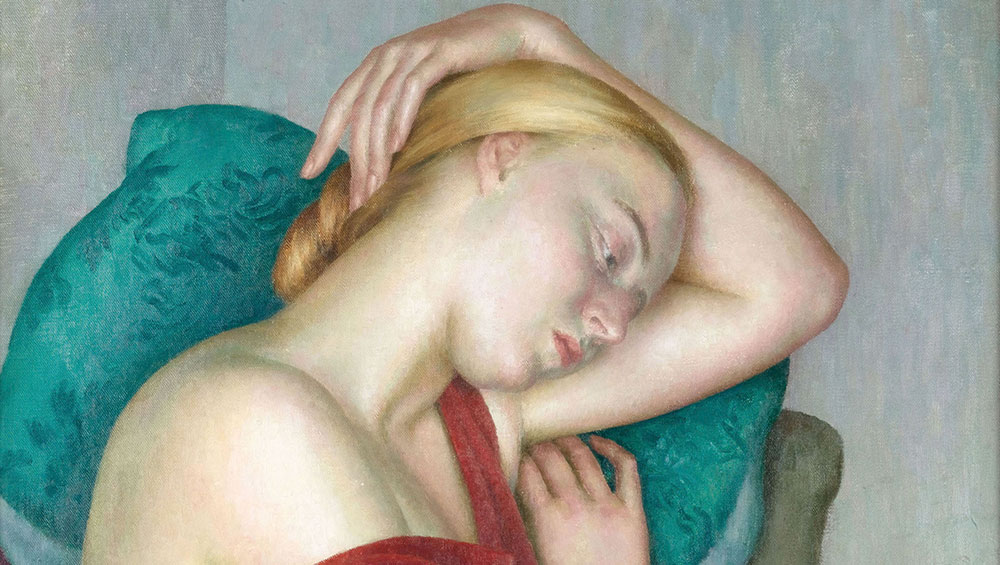 Women never had a chance to excel in the old days; they were not allowed the education … At last they are having their chance. [Laura Knight, 1930]

This quote by Laura Knight captures well the mood and motivation of the curators of this summer’s long-delayed (due to Covid) exhibition at the Laing Art Gallery in Newcastle, Challenging Convention. The gallery’s all-female creative team, passionate about researching and highlighting female artists in the collection, took, as its starting point, the works by Dod Procter (1890-1972) and Laura Knight (1877-1970) belonging to the gallery, and added two further artists, Vanessa Bell (1879-1961) and Gwen John (1876-1939), who although coming from very different social backgrounds, were born within 15 years of one another. 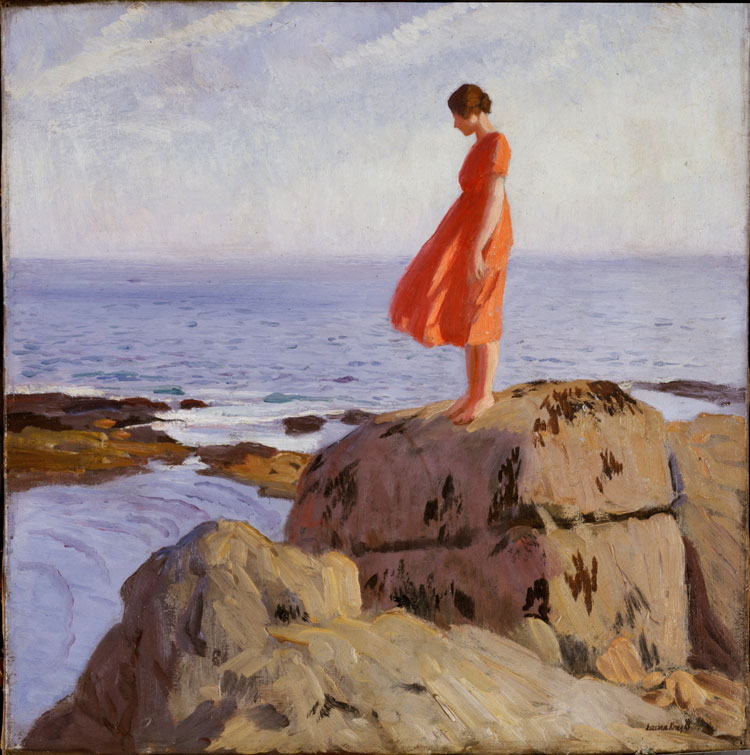 The curators have brought together 60-odd objects – primarily paintings, with a few drawings and ceramics by Knight – from more than 40 UK public collections, to explore how these four women, each in her own way, challenged varying (but, ultimately, stifling) conventions of the day to become successful and celebrated artists, at a time when this was still far from the norm. Against the backdrop of a pivotal moment of social change – with two world wars, burgeoning modernism, and increasing emancipation – these artists not only challenged and changed societal views, but altered the course of the previously primarily patriarchal canon of British art history. Moreover, as Julie Milne, chief curator of the Laing, Hatton and Shipley art galleries, says: “Issues of gender equality will have a particular resonance for audiences at a time where challenges of economic hardship, unstable work and childcare caused by the pandemic are disproportionally affecting UK women.” As Knight noted almost a century ago: “Michelangelo had no baby’s bottle or teapot hanging round his neck.” Sadly, as the pandemic has highlighted, plus ça change. 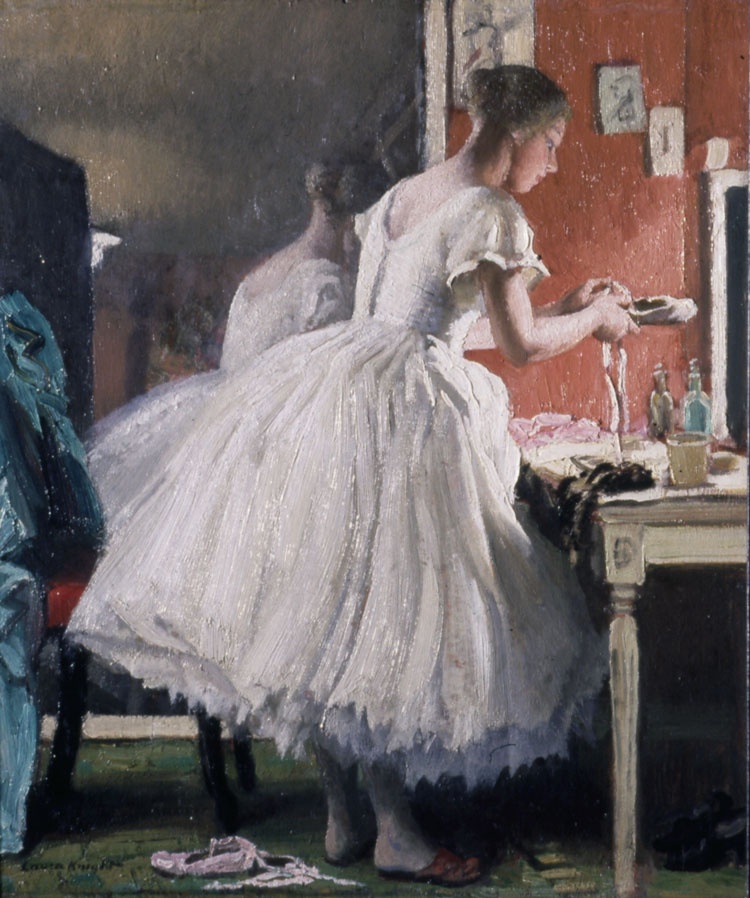 Following an introductory section, exploring the principal themes – one of which is how each of the artists represented women in her paintings, marking the early beginnings of the female gaze – and the wide-ranging nature of the paintings on display, providing contextual information and brief biographies, and juxtaposing works by all four artists, there is a separate section – demarcated by carefully chosen, different wall colours – dedicated to each in turn. The works are largely hung at a level height around the room, and the exhibition is quite text heavy, but everything offered is invaluable information, which, of course, can be digested as much as the individual visitor wishes. What ought certainly to be read, however, are the carefully selected and elucidating quotes around the top of the walls. These offer insight into the individual and societal struggles faced, as well as adding a sense of the personality of each artist.

The first artist visitors encounter in depth is Bell, better known for her subversive biography – as the sister of Virginia Woolf and a key member of the Bloomsbury Group –  than for her painting. Married to the critic Clive Bell, with whom she had two sons, Julian and Quentin, she also had a daughter, Angelica, with the otherwise gay artist Duncan Grant, and they all lived together at Charleston farmhouse, in East Sussex. 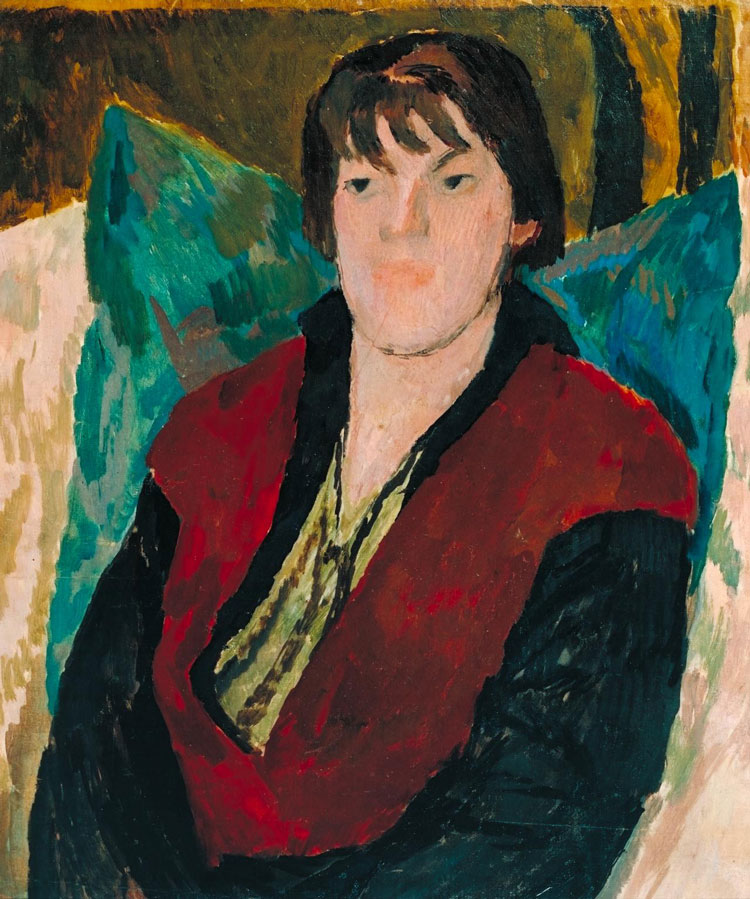 While nods to other members of the Bloomsbury Group are made, through the showcasing of selected portraits, including the sketchy and earnest Helen Dudley (c1915), sitting stolidly and androgynously, holding her shape like any male sitter of years past, and with the more conventional The Red Dress (c1929), based on a photograph of Bell’s mother taken by her great aunt, Julia Margaret Cameron, the curators were nevertheless keen not to let this unconventional life story overshadow Bell’s work, which is certainly strong enough to speak for itself. The modernity of her early paintings, and her exceptional handling of colour and creativity in terms of design, are especially apparent in the works selected for this exhibition. The Dudley portrait, for example, explores tone and colour through a stark juxtaposition of complementary red and green, while The Tub (1917) shows the influence of French post-impressionist art – here, most particularly Bonnard, who frequently painted his wife Marthe in the bath. 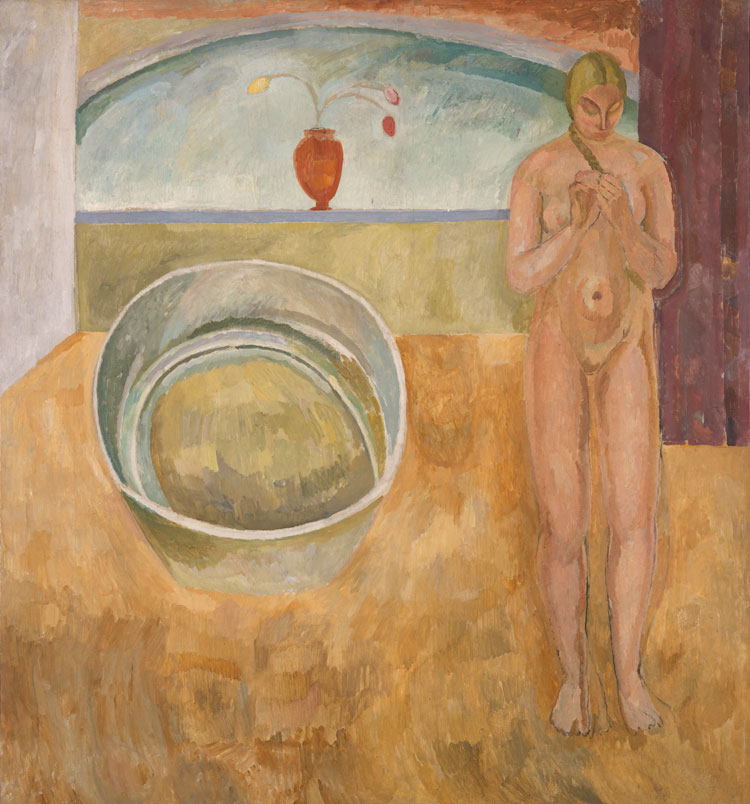 This, however, is a much bolder, more modern, female take on the female nude – a subject matter still not entirely normalised for women at the time. Accordingly, it is deliberately hung here to confront visitors as they arrive. A more pastel – and, dare I say it, feminine – palette is used for View of the Pond at Charleston, East Sussex (c1919), perhaps precisely because, here, Bell is not painting a female sitter, and therefore there is, in this instance, no need to challenge that particular convention?

The Welsh artist Gwen John, up next, was much admired by Bell. She followed her younger brother Augustus John – in whose shadow she was doomed to remain during her lifetime – to study at the Slade School of Art, London, in 1895, at a time when, perhaps surprisingly, there were more women enrolled there than men. She continued her studies in Paris, where she settled, latterly moving to a suburb and converting to Catholicism. Her typically small-scale works were greatly appreciated in the Parisian art world and sold well. John’s main flouting of convention was in her deliberate avoidance of all family (as wife and mother) and domestic ties which might, as she saw it, interrupt her practice. 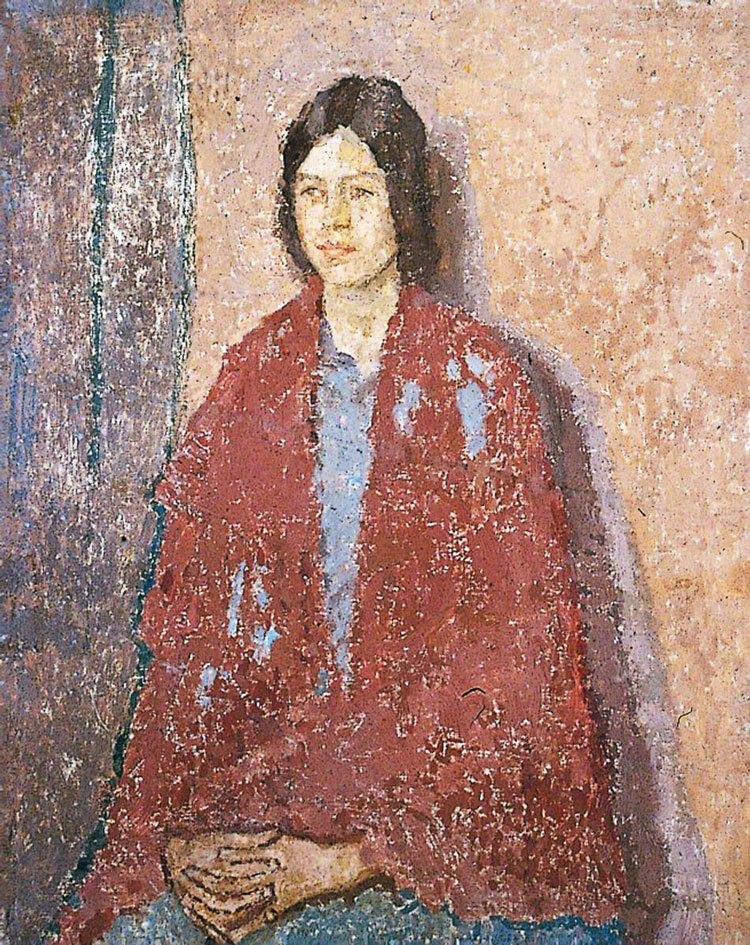 An early work, a portrait of her sister, Winifred John (c1900), while not yet making use of her latterly more refined colour palette, nevertheless already reflects the kind of subject matter that would go on to interest her – women on their own. This is a quite beautiful example, with an arresting and dreamy gaze; a vibrant orange backdrop, merging with the fiery reflection on Winifred’s cheek; and a loosely scumbled texture. The later portrait of Chloë Boughton-Leigh (1910-14), again a solitary female, depicts the sitter with her head inclined in a mixed expression of subjugation, melancholy, modesty, thoughtfulness and sensitivity – something of a trademark in much of John’s work. The even later Young Woman in a Red Shawl (1917-23) shows the development of her colour relationships, from the early vibrancy, through a spell of greyness, to this happy and refined midway palette, with primary colours tending towards muted, pastel shades, again with a scumbled texture. A similar palette is evidenced already in A Corner of the Artist’s Room in Paris (1907-09), with its creamy lemon, duck-egg blue and off-white, also an example of John’s second key subject matter – lonely interiors. She would frequently rework certain scenes again and again, this one being a case in point. 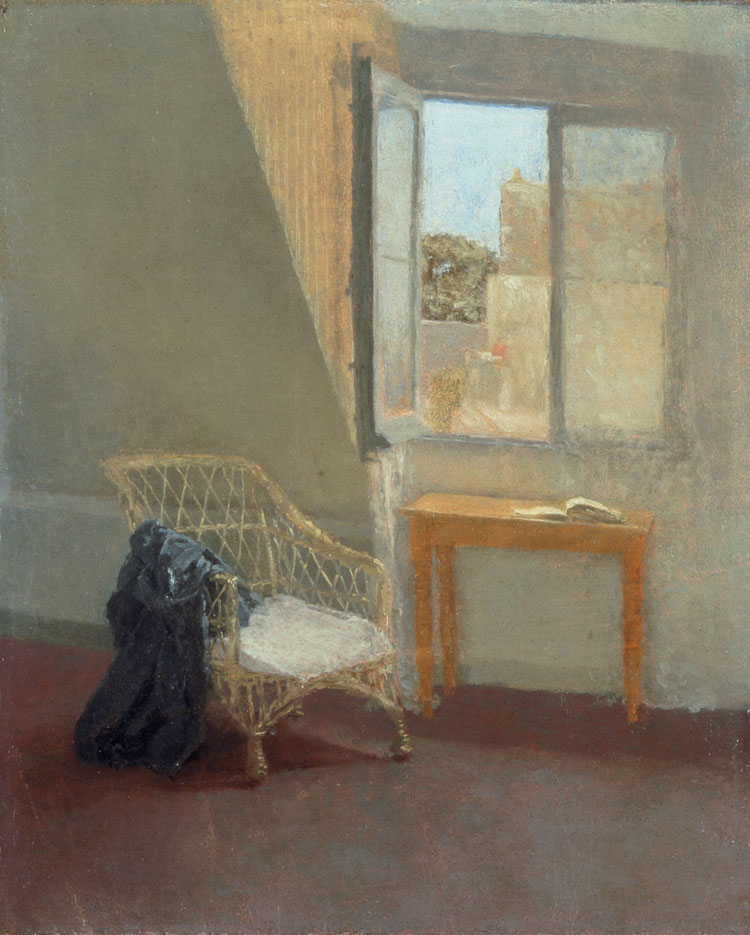 While all the women benefitted from working in tight-knit and supportive communities, Knight is perhaps the best example of this. Having begun her artistic studies at Nottingham School of Art at the age of 13 – her mother, who was an art teacher, recognised and promoted her talent – she went on to develop her skills in an artist colony at Staithes in Yorkshire, before moving to a second, in Newlyn, Cornwall (where she met Procter, with whom she worked in the school set up by Stanhope and Elizabeth Forbes, and the two became friends for life). In Nottingham, she met her husband-to-be, Harold Knight, who was the school’s star student, and behind whom she would set up her easel to observe how “the work should be done”. In 1927, Knight became the second female associate of the Royal Academy, and, nine years later, the first female elected full Academician (and the first female Academician per se since the Academy’s founding 168 years before).

Knight’s subject matter spans a wide range of themes, including women working on the home front during the war (the large-scale and painstakingly detailed war commission, A Balloon Site, Coventry (1943), depicting women working towards the war effort in what was really a man’s role, epitomises the context of the whole exhibition); her light-filled, plein-air canvases from Newlyn (The Beach (c1909), from the Laing collection, is unquestionably one of the highlights of the show); but also the circus and the stage. The deep crimson walls of her section perfectly capture the theatricality of so much of her work, with clowns hanging next to ballet and flamenco dancers. Wherever she went, Knight always integrated herself into the community, and so there was never anything voyeuristic about the way in which she worked. She painted women as active equals, not passive subjects.

Last but not least, Procter – born Doris Shaw, but who exhibited as Dod from 1923 – lived and studied in Newlyn, from her teens, and met her artist husband Ernest Procter there. Like John, she also later studied in Paris. From the early 20s, Procter focused on portraits of women seen through her particular female gaze. Painted in the realist tradition, there is a real sense of solidity to them, as exemplified by the Laing’s Girl in Blue (c1925) and Early Morning (1927), a reclining portrait of Cissie Barnes, the daughter of a Newlyn fisherman. Shown stretched out and seemingly about to yawn, another version of this almost-grisaille work, simply titled Morning (1927), caused a sensation when it was exhibited at the Royal Academy Summer Exhibition that same year, where it proved very popular with the public and was voted “Picture of the Year”, going on to be purchased for the nation by the Daily Mail newspaper. It toured Britain and travelled to the US, making Procter one of this country’s best-known artists of the day. In 1942, she followed in Knight’s footsteps by becoming the second elected female Royal Academician. 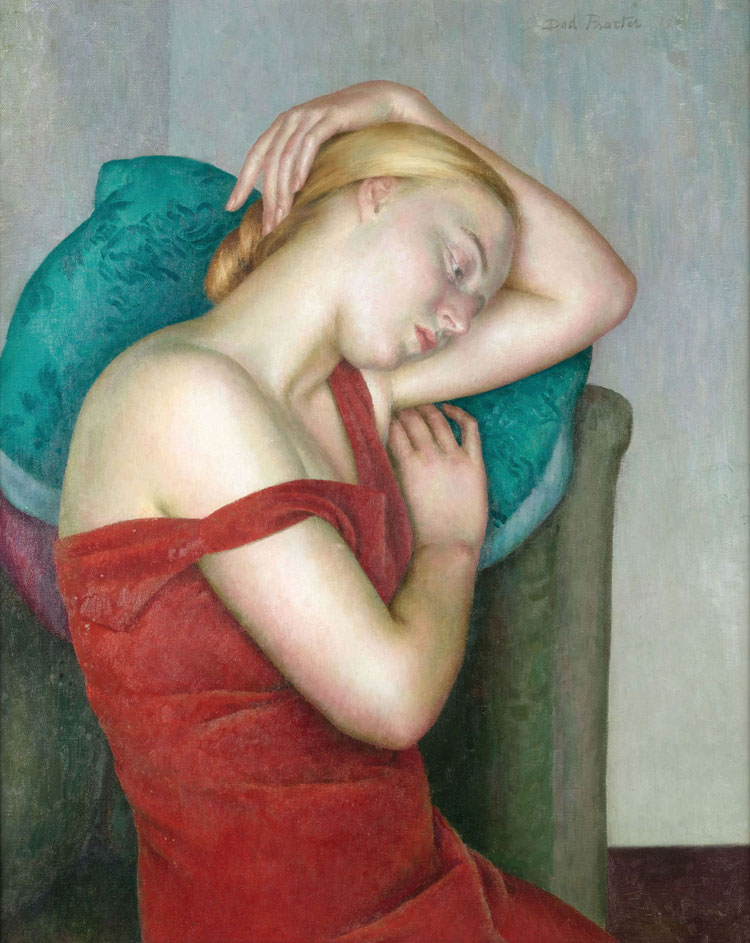 Although more colourful – with a bright red velvet dress and the sitter’s golden hair – than Procter’s other figure studies on display, The Golden Girl (c1930), like John’s portraits, bears a real sense of melancholy. Does the title, then, refer solely to her hair, or is the sitter meant to be the “golden girl” of the moment? If so, the portrait seems ahead of its time in its behind-the-scenes look at celebrity, revealing that moment where the glittering star lets her guard down, removes her mask, and allows her perfect smile to fade – something all too recognisable in our contemporary era of social-media culture.

Despite her solidly painted figures, Procter was described by Knight, after their first meeting, as “a charming young thing, with a brilliant complexion, enormous dark eyes, long slender legs – swift and active as a gazelle”. She also made some really beautiful still-life paintings – including Black and White (c1930) – exploring femininity through objects (in this instance, a muff, a silk scarf and full-length white gloves). Later works, such as Anemones (c1936), are more impressionistic and, like John’s A Corner of the Artist’s Room in Paris, use white very much as a colour in its own right.

Following the death of her husband, in 1935, Procter travelled a fair bit, including to Jamaica, where she spent time making portraits of local children. These, exemplified here by the tender Ancilla with an Orange (1956), demonstrate a softness associated with her later works.

Overall, then, this exhibition is expertly brought together, and tells its story – as well as the individual stories (both biographical and of developing practices and styles) of its four artists – clearly and vivaciously. By focusing on four painters, visitors come away with a sense of really having got to know each one and her work, rather than feeling overwhelmed by a fleeting overview of the era. This really is an exploration and celebration of the artists, rather than the illustration of a vague curatorial thesis, sadly something far too common in large-scale exhibitions today. While working in different ways, and overcoming different obstacles, each of the artists included challenged plentiful convention in her own right, and became a torchbearer for women in the history of British art. And now, as Milne notes, is certainly the moment to honour their determination and subsequent achievements. 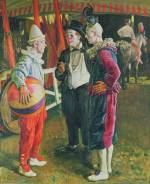