Propaganda may seem like a slightly cruel way to describe the war photography of Cecil Beaton, but it is also very apt. The current exhibition, Cecil Beaton: Theatre of War at the Imperial War Museum, London, includes close to 250 out of the almost 7,000 photographs the artist took during the second world war. Although Beaton is best known for his portraits of royalty and socialites, and designs for theatre and later film, this exhibition draws attention to an under-explored chapter in Beaton’s career.

The exhibition begins with the Beaton we know so well, the dandy society photographer, with a love of drama both on and off the stage. From 1927, Beaton was contracted to Vogue, contributing photographs as well as cartoons, while maintaining a flourishing career as a stage designer. Beaton obviously relished his life as a “Bright Young Thing”, seeming to take little notice of several well-meaning warnings from friends regarding his outlandish and often scandalous lifestyle. In 1938, an anti-semitic comment in a cartoon inadvertently published by American Vogue brought Beaton’s glittering career to a complete halt. The international impact of this scandal is highlighted in the exhibition through a series of press clippings displayed in a glass case next to the public apology issued by Beaton. Dismissed from Condé Nast in disgrace, Beaton found it impossible to find work.

After much lobbying on his own part, Beaton was finally commissioned in 1940 by the Ministry of Information to take a series of portraits of British war leaders. From the familiar territory of portraiture, Beaton then began work on a major study for the Ministry of the Blitz. Here we see the three-year-old Eileen Dunne, sitting in her hospital bed, head wrapped in bandages, starring with her dewey-dow eyes into the camera as she clutches her toy; an old man covers the windows of the parish church preparing for the blackout; a sallow-faced old woman sits at the table of a soup kitchen. The images were intended both to boost morale at home and to garner sympathy abroad, particularly from the United States. The photograph of little Eileen graced the cover of Life, becoming both an evocation of the horrors of war and a plea for help for the innocent. A selection of 50 images from this study were also used to illustrate James Pope-Hennessy’s History Under Fire (1940–41) one of the first books on the Blitz. Yet it is Beaton’s images of landscape affected by the Blitz that are the most interesting. Carefully composed and structured, these photographs of ruins often seem more like a stage set or a film still than a documentary image. Yet the wounded and dead are always absent, with figures only appearing to clear the debris. The true and awful horror of war is somehow always left off the stage, like in a Greek tragedy, with the architectural alone ravaged by war.

In many ways an unlikely choice for this work, Beaton would become the longest serving war photographer. Yet his eye for composition – and a pretty young thing – never left him; the soldiers, pilots and sailors he photographs are always youthful and handsome. After documenting the Blitz, Beaton was sent to make a study of the RAF and then a shipyard in Tyneside. In 1942, he received his first foreign assignment, a three-month tour of the Middle East, including the Western Desert, Iran, Iraq, Palestine, Transjordan, Lebanon and Syria. When looking at the images of the Middle East, after over 70 years have past, the most intriguing are those that document a world that would be destroyed in the years after the second world war. Two portraits of King Faisall II of Iraq, aged seven in 1942, playing in the palace and sitting on a throne that dwarfs him, record a way of life that would disappear in 1958 when the young King was assassinated.

In 1943 and 1944, Beaton was sent on two more three-month tours to India and Burma, and finally China. In India, Beaton again captures scenes of a way of life that would change after the war. He seems at times a sophisticated tourist, taking beautiful images of street musicians, actors and merchants. China clearly fascinated Beaton, and its influence would find its way into his costume designs for a production of the opera Turandot in the 1960s. Amongst the images of the drilling Chinese army and government officials, there equally as many pictures exploring ancient architecture and traditional crafts, such as the making of oiled paper umbrellas.

As close as Beaton may have physically come to the fighting, he never photographed it. While newsreel footage and documentary reportage certainly did exist during the second world war, Beaton provided a different type of image. He had an exquisite eye for the potentially dramatic and even beautiful in a time of horror. In later life, Beaton said that this was the work that he was the most proud of, but it is clear that Beaton did not relish it. His diaries from the war were published along with his other memoirs in the 1970s and it was only then that Beaton seemed to take stock of the work he had done. The complete archive of Beaton’s photographs from the war are held by the Imperial War Museum and the exhibition is certainly a long-awaited peak at less than a tenth of its holdings. 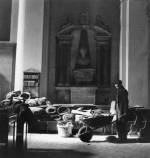 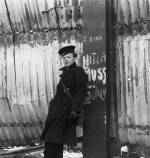 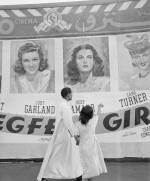 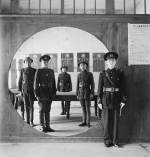 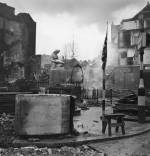 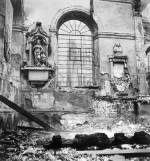