Cao’s first large-scale UK exhibition is a fantastical exploration of utopian and dystopian worlds, a collision of the real and the virtual, and a meditation on technological progress 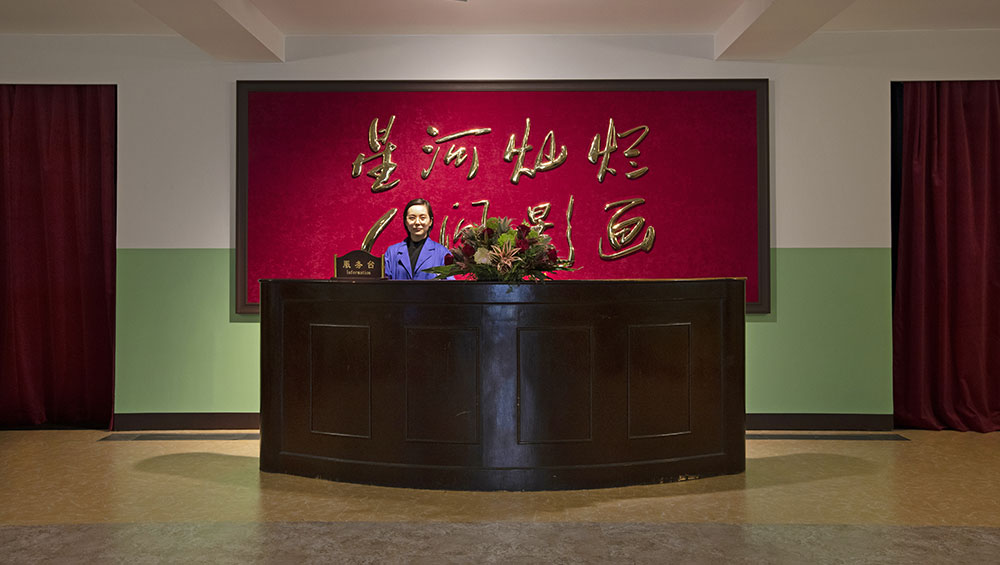 Serpentine Gallery, London
4 March – 17 May 2020
(Following careful consideration in response to the Covid-19 situation, the Serpentine Gallery is temporarily closed to the public until further notice.)

Entering Cao Fei’s exhibition at the Serpentine Gallery is like being transported to another world. Walk through the double doors and you are instantly in the foyer of the Hongxia Theatre, a former cinema and community centre in Beijing that now serves as the artist’s studio. The uncanny stage-set – complete with wooden reception desk, cinema seats and tiled flooring – includes a vitrine filled with old tickets, film reels, documents and photographs of former employees. In one corner, a video documentary tells the story of the 1950s theatre, which was built in the Jiuxianqiao district for workers at the nearby electronics factories. 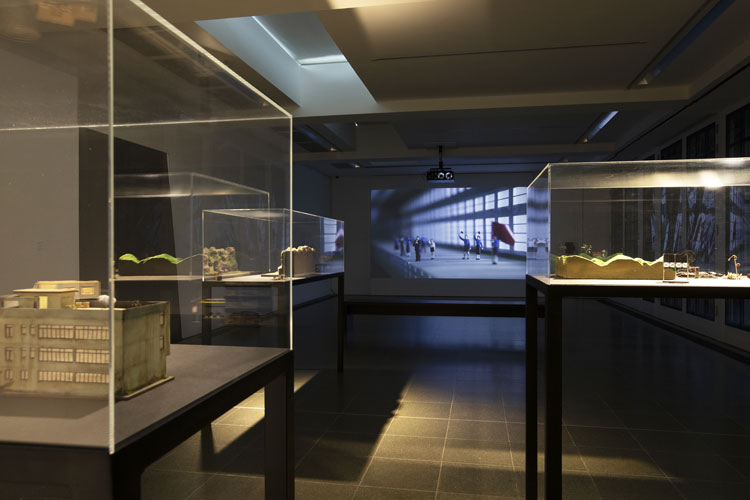 The installation is the culmination of the artist’s five-year research project into the building’s history and the surrounding neighbourhood, where the first Chinese computer was developed with support from the Soviet Union. But the district’s socialist era history is merely a springboard for Cao, whose first large-scale UK exhibition is a fantastical exploration of utopian and dystopian worlds, a collision of the real and the virtual, and a meditation on the juggernaut of technological progress.

Virtual tour of the exhibition

Passing through heavy red drapes, you enter a darkened space where a large screen is showing the feature-length film Nova (2019). This haunting sci-fi tells the tale of a Chinese computer scientist working on a secret project to transform people into digital entities. A failed experiment sees the man’s son become lost in cyberspace; trapped as a digital ghost, he spends the film trying to reconnect with the real world. 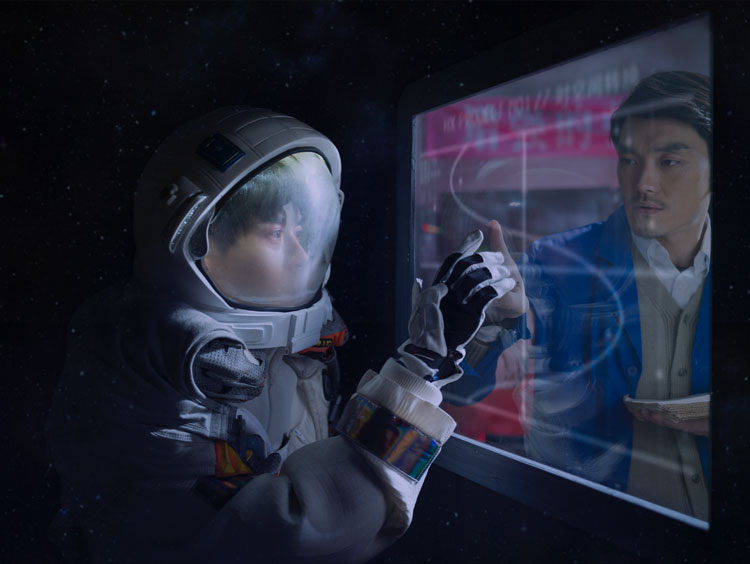 Rejecting chronological time, Nova mingles the past and the future to probe issues facing our present age. Cao’s retro-futurist aesthetic is captivating but, at nearly two hours long, the film drags, requiring a serious investment of time (you need a good four hours to see everything in the show). Nevertheless, its central question is compelling: how much are we willing to sacrifice to technology and progress?

This idea has long underpinned Cao’s work. It is addressed more subtly in her early video Whose Utopia (2006), which focuses on activities at Osram’s vast lighting factory in Guangzhou, the capital of Guangdong Province and the beating heart of China’s manufacturing industry. This was the city where, in 1992, Deng Xiaoping launched the capitalist economic reforms that unleashed the largest and most rapid period of industrialisation seen in modern times. Anonymous workers are shown slaving on the production line, inserting filaments, quality testing and preparing products for shipping. Then, suddenly, they begin roleplaying their fantasy lives: a dancer spins and twirls in a warehouse; a guitarist plays a solo in front of a conveyor belt, and a tai chi master performs his moves amid hi-tech workstations. By questioning the “Chinese Dream”, with its promise of a better life for everyone, Cao ponders the extent to which it allows for individual hopes and dreams to be realised and who, ultimately, benefits from her country’s phenomenal economic transformation. 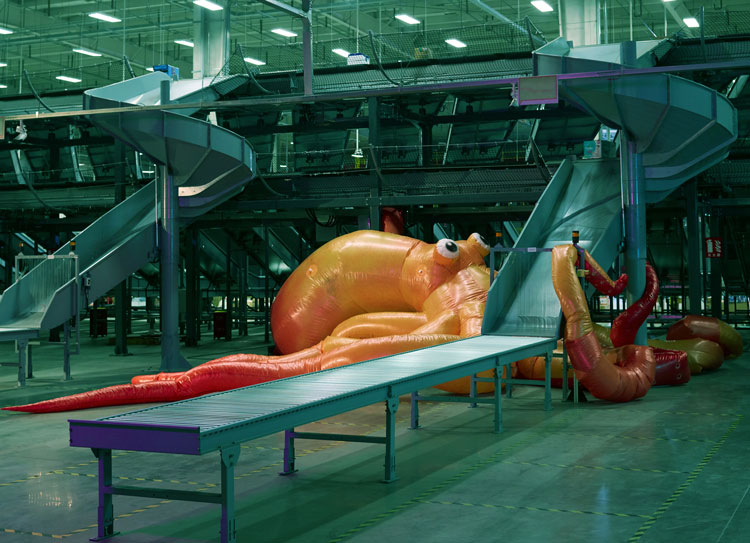 Similar themes are explored in the recent video Asia One (2018), which considers the role of labour within the context of advancing automation. Set in a vast logistics warehouse, the film follows the relationship between two silent protagonists: a young man and a young woman who spend more time interfacing with AI robots than other humans. These workers, the only employees at the automated sorting centre, are desperate for affection yet struggle to connect. They are but small cogs in a dehumanising machine that exists to fulfil consumer desire day and night. As in Whose Utopia,the workers’ tedious existence in a technologically advanced environment is punctuated by surreal sequences: visitors from the future arrive for an inspection and a Cultural Revolution-era dance troupe perform to disco tracks. While both films combine fantasy with reality and speak to the impact of accelerating economic growth, Asia One underscores the specific challenges for workers in an age of artificial intelligence. 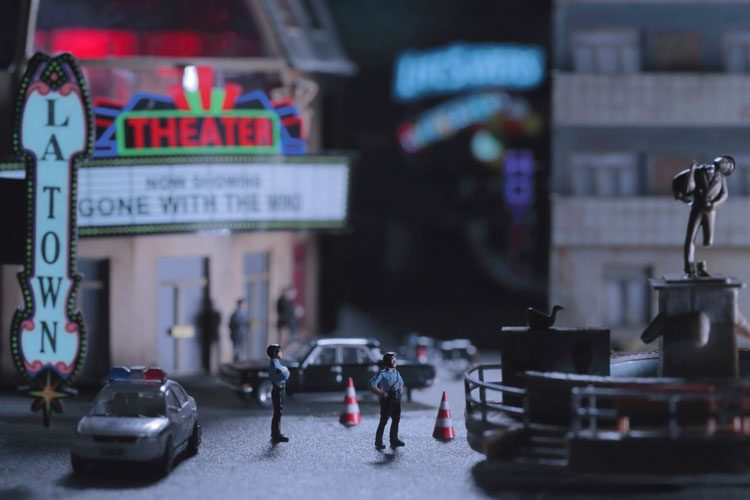 Cao’s works are at their strongest when landing on a harmonious blend of reality and fiction. Occasionally, however, they tip over into unfettered fantasy. A prime example is La Town (2014), an impenetrable stop-motion animation inspired by Alain Resnais’ 1959 new-wave film Hiroshima Mon Amour. Envisaging a crumbling, post-apocalyptic metropolis, it uses modified plastic figurines to tell the story of a dystopian future where time has inexplicably frozen. Its miniature scenes of death and destruction (not to mention a giant octopus) recall the Chapman Brothers’ provocative dioramas, though without the duo’s postmodern irony and gruesome panache. Several sets used in the production of the film are displayed at the back of the gallery, but these are similarly underwhelming. 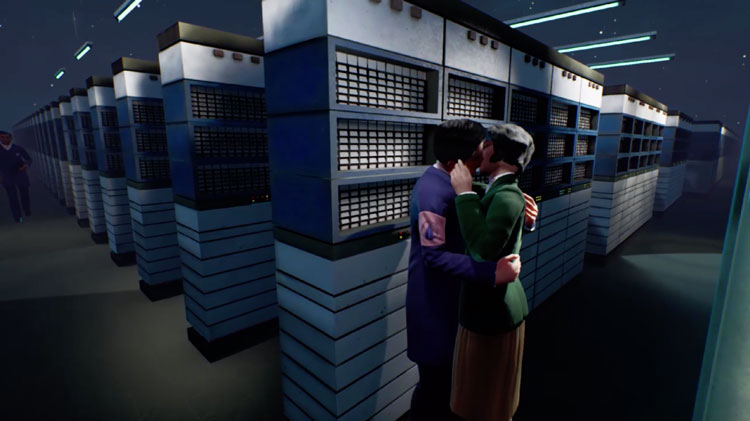 Cao Fei, still from The Eternal Wave, 2020. Virtual reality. Courtesy of the artist and Acute Art.

Conversely, The Eternal Wave (2020) is an engrossing virtual reality work that sucks you in to an imaginary world inspired by Cao’s research into the early electronics industry in China. The immersive experience begins in a room modelled after the Hongxia Theatre’s kitchen, though it feels more like a medical consultation room. After an assistant helps you don the bulky headset, you are whisked off on an interactive, multisensory journey. From the kitchen, you are teleported to Nova’s computer laboratory; then you are gliding up the steps of the Hongxia Theatre, watching a film and meeting a woman who tells you she needs to leave the country. In another reference to Nova, a small boy asks you if you have seen his father and then you are back in the kitchen where an astronaut emerges from the sink. As meteorites shoot past the window, the trip ends with the realisation that the kitchen is actually floating in space. It is easy to be wowed by the experience, although what it all means is not always clear. 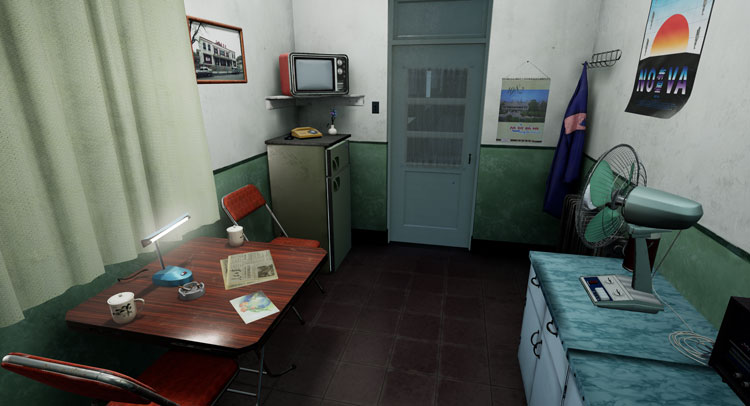 Cao Fei, still from The Eternal Wave, 2020. Virtual reality. Courtesy of the artist and Acute Art.

For an artist who enthusiastically embraces new technologies and enjoys troubling the lines between reality and fantasy (she once created an entire city in the online virtual world Second Life), Cao’s films, installations and digital works suggest an ambivalence about such developments. Indeed, this remarkable show drips with anxiety regarding the human cost of accelerated technological change. It is certainly a relief to find yourself face to face with a real person when the VR goggles are removed. For now, it seems, the power of personal contact can never be matched by the virtual world. 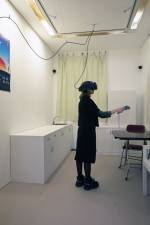