Candida Powell-Williams: ‘Each object becomes more than just the narrative – it becomes this opportunity to interact’

Candida Powell-Williams: ‘Each object becomes more than just the narrative – it becomes this opportunity to interact’

The artist shows us round her immersive installation, exploring the fetishism of anthropological objects

Candida Powell-Williams has long seen sculpture and performance as inseparable. Her current immersive installation at Bosse & Baum in Peckham, south London, brings together multiple elements, including both of these, as well as moving image, an artist’s book and even other artists’ editions, produced in an exquisite corpse-type manner throughout the duration of the exhibition.

Her second solo show with the gallery, The Vernacular History of the Golden Rhubarb grew out of a year-long residency at the British School in Rome, during which Powell-Williams collected implausible stories, documented in such a way as to make them believable. She became fascinated, primarily, by the objects and relics at the heart of these tales, and, in particular, by tourists’ behaviour in response to them. A performance workshop, held before the exhibition opened, offered participants the opportunity to interact with her sculptures, and footage of this has been drawn over and turned into gifs, which can be viewed by scanning QR codes in the gallery foyer. It was important for Powell-Williams to incorporate this public choreography as a work in its own right, rather than just through documentation. Similarly, she is producing an artist’s book, which, on one level, will act as an instruction manual for interacting with the exhibition, but, on another, will be an objet d’art itself.

Referencing well-known and lesser-known touristic objects from across Rome, represented here in a colourful manner, against a grey archaeological site backdrop, with de Chirico arches and cross-stitched frescoes from the Villa of Livia at Palazzo Massimo, the installation invites viewers in to explore and interpret to the best of their knowledge, adding a sprinkling of their own imagination to complete and enhance the already bizarre tales.

Powell-Williams showed Studio International around and explained some of her inspirations.

• Candida Powell-Williams: The Vernacular History of the Golden Rhubarb runs until 19 March 2017 at Bosse & Baum, London 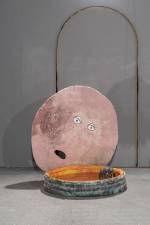 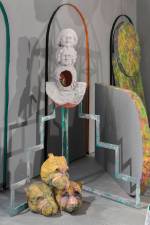