Paul Cézanne was a man of contradictions. As an artist he took an unconventional approach to drawing that was the subject of criticism.1 But as a colourist he was praised for his impressionist naturalism.2 When he was young, he was seen as quick-tempered and uncultivated; yet his patience led him to develop a classicism compared to the Old Masters.

He was the son of a family of shopkeepers and craftsmen from Aix-en-Provence, who arrived in Paris in 1861. Yet by the time of his posthumous retrospective at the Salon d’Automne in 1907, he was perceived as the father of modern art. Hailed as “the great genius of the whole [post-impressionist] movement”3 by the influential art critic Roger Fry, Cézanne inspired cubism and its fractured reality that propelled the narrative of modernism in the 20th century. Earlier this year, his masterpiece The Card Players (1893) upended the global art market when it was sold for a record sum to Qatar. It was surely an achievement for a man once viewed as a failed artist, even by his friend the novelist Émile Zola.4

Now at the Musée du Luxembourg in Paris, a superb exhibition – Cézanne and Paris – explores the many facets of the world of this brilliant artist through a display of 75 paintings from throughout his life. The show takes as its starting point the year in which the 21-year-old Cézanne arrived in the city, after a number of letters from Zola encouraging him to escape the confines of Aix. But in contrast to the writer’s literary description of the spectacle of Napoleon III’s modernised capital, with its wide elegant boulevards and uniform façades designed by Prefect Haussmann; and its surface attractions like dance and theatre (captured by impressionists such as Renoir and Degas), what unfolds is Cézanne’s description of a silent “inner” city that was frequently overlooked. He set up his easel in an empty Montmartre street and went out on to the roof to paint his only panoramic view of Paris while living in the Rue de l’Ouest, nearby the old Montparnasse station.

The Rooftops of Paris (1881–82) stands out as a true representation of what is likely to have been a quiet residential street during Cézanne’s time, but is now a “cheerless thoroughfare”.5 The canvas is divided into three sections: a grey-green zinc roof in the foreground, quirky pastel-coloured façades interspersed with leafy green trees and a milky sky above. The scene is structured by primitive-looking squares and rectangles, anticipating the artist’s quasi-architectural treatment of nature through its elemental shapes in his great paintings of Mont Sainte-Victoire in Provence.6 The skyline is dotted with landmarks: the eye is drawn to the central point of the Saint-Jacques tower and the steeple of the Sainte-Chapelle; on the left stands the church of Notre-Dame-des-Champs, whereas on the right, in the half-light, are the towers of Notre-Dame de Paris. The painting not only offers an illuminating view of part of the city that was transformed by a general renovation, but hints at its many forgotten workers in its allusion to the story of an engineer in Zola’s novel L’Assommoir (1877).

In his early days in Paris, Cézanne enrolled at the informal studio of the Académie Suisse, near the Pont Saint-Michel – a hothouse of impressionism. The show explores the formative influence of his artistic circle, including Armand Guillaumin – whose impressionist painting The Seine at Bercy he transposed by using colour in a canvas prefiguring constructivism – and Camille Pissarro, through whom he was introduced to the art collector Doctor Gachet. In 1863, he would join his circle at the Académie Suisse in participating at the Salon des Refusés – a symbol of rebellion against the official art establishment, at which Manet exhibited Olympia. The show holds the acknowledged masterpiece of his Académie Suisse oeuvre, his monumental painting The Negro Scipio (c.1867), which depicts a model who was a popular subject at the studio. In a challenge to the academic convention of painting the male nude, the sinuous muscular form stretching the height of the canvas is articulated with warm swirling brushstrokes in tones of bronze, blue and black against a cool triangle of white fabric – which holds an extraordinary pictorial power. The painting would hang in Monet’s bedroom in Giverny, next to works by Berthe Morisot and Renoir.

While Pissarro disliked visiting the Louvre, Cézanne made it his lifelong school, where he would study with sketchbook in hand and paint oil copies of Old Masters such as Delacroix (Dante and Virgil) and Rembrandt (Bathsheba) – expressive figurative works whose coloration and form anticipated his classical series of the Bathers. He created a tangible corporeality with his still lifes, following his maxim “to astonish Paris with an apple”.7 At the museum is a rich array, but one stands out: Still Life with Black Clock (1869–70), a reciprocal gift to Zola (and an iconographical portrait of his urbane erudition). The clock and mirror of the tableau evoke a sophisticated conflation of space and time, and the ink well and conch shell maintain a delicate equilibrium between human and natural worlds. The objects resonate with a chromatic materiality as they stand in the light against the darkness. On seeing the Black Clock at the Salon d’Automne in 1907, the Austrian poet Rainer Maria Rilke tellingly remarked that the fractured spaces were contained by the picture as “a basket contains fruit and leaves: as though they were all as simple to grasp and to give”.8

Cézanne’s belief that nature is purely a construction of human consciousness resonates throughout this wonderful exhibition at the Musée du Luxembourg, in famous still lifes such as the Black Clock, and also in lesser-known portraits of his circle of friends in Paris and vibrant landscapes of Auvers and Pontoise. The artist not only succeeded in drawing with colour, but in observing the world with fresh eyes. Though he studied the Old Masters, he forgot what had gone before and simply painted nature as it looked before him. In doing so, he discovered an inner silent world of truth, abstracted from the spectacles of the modern city beloved of his fellow impressionists. That is how he succeeded in achieving an artistic legacy that endures today.

4. Émile Zola had Cézanne in mind when he created the fictional character of Claude Lantier, the failed painter in the 1886 novel L’Oeuvre (The Masterpiece). Zola wrote: ‘Paul may have the genius of a great painter, but he will never have the genius to become one.’ See Cézanne and Paris, p.15.

6. Cézanne spoke of treating nature ‘by the cylinder, the sphere, the cone, everything in proper perspective so that each side of an object is directed towards a central point’. See Herbert Read, A Concise History of Modern Painting (London: Thames & Hudson, 1995), p.17.

8. John Rewald in collaboration with Walter Feilchenfeldt and Jayne Warman, The Paintings of Paul Cézanne: a catalogue raisonné, vol.1, p.115. 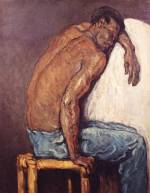