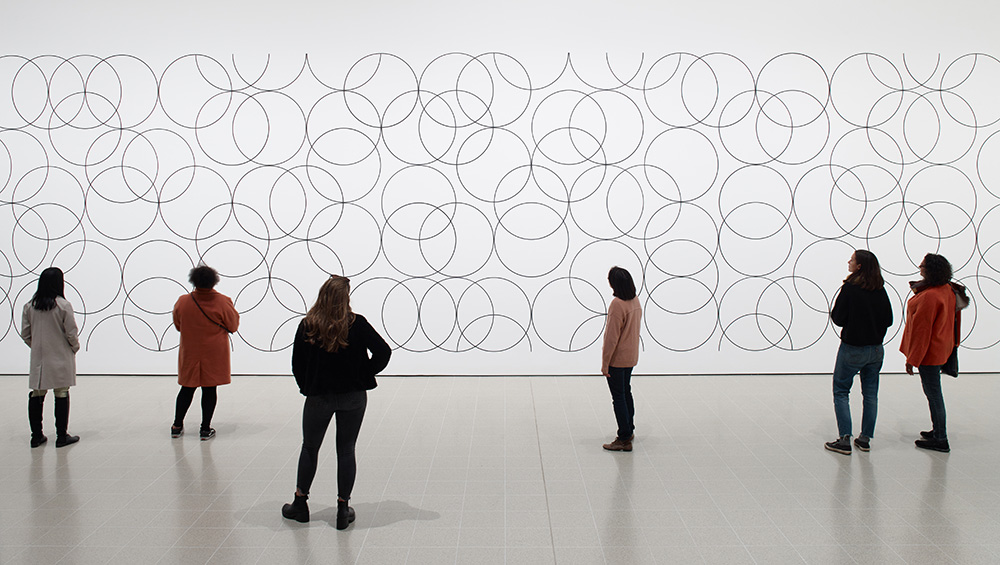 When the art theorist Anton Ehrenzweig wrote the first critical essay on the work of Bridget Riley (b1931) in Art International in 1965, he could not have imagined that she would still be making new work in 2019. This exhibition shows the full extent of Riley’s dazzling paintings from the 1940s to the present day. From her beginnings at Cheltenham Ladies’ College (1946-48) and Goldsmiths College, London (1949-52) to her most recent developments, Riley has never ceased to explore and discover what she can experience and achieve through painting.

Her art-school training focused on drawing from life and learning from the work of other artists. The exhibition includes a captivating copy of Jan van Eyck’s Man in a Red Turban (1433) made by Riley in 1947, and she closely studied the work of many artists, including Henri Matisse, Pierre Bonnard, Paul Klee and Georges Seurat. 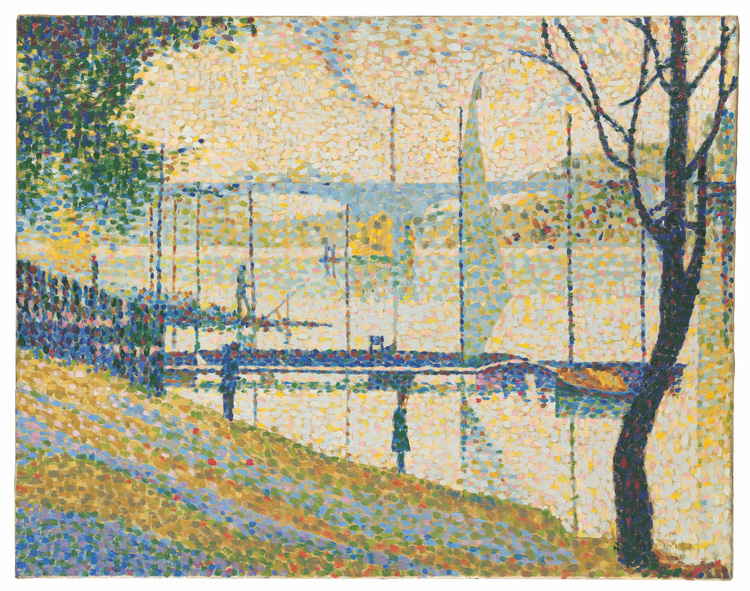 Seurat was especially important for Riley and, in 1959, she made a version of his painting The Bridge at Courbevoie (1886-87), a process that allowed her to further examine his thinking and working method. She observed: “His work gave me a sense of the viewer’s importance as an active participant. Perception became the medium.” That same year Riley saw the exhibition The Developing Process at the Institute of Contemporary Arts in London, an experience that prompted her to attend one of artist Harry Thubron’s summer schools in Suffolk. The course concentrated on the creative process itself and considered major artists and art movements not historically, but in terms of making, something that opened up new possibilities in painting for Riley.

Her work from the 60s shows an order and precision that does not sit happily with the anti-form impulses of that period. Still, her collaboration with studio assistants and an overriding concern with her viewer’s physical embodied experience of the work mean that she is aligned with other contemporary practices such as happenings. Perhaps that is why she has always resisted the term op art. Riley’s work, as this exhibition clearly shows, is not a purely optical experience, but a bodily one too. This could not be clearer than in the reconstruction of Continuum (1963/2005), the only three-dimensional work Riley has ever made. Its spiral form and continuous painted surface envelops the viewer, who is positioned inside its curved walls. As an experiment, it was in the end too literal for Riley, who instead pursued sensation and experience in two dimensions in dizzying works such as Blaze 1 (1962), Climax (1963) and Shuttle 2 (1964). 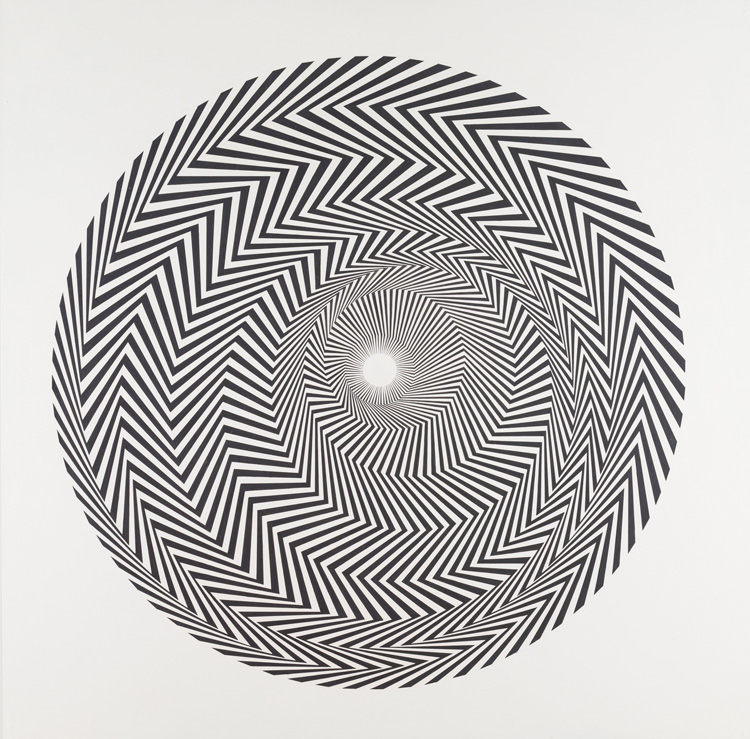 As she explored much later in conversation with the art historian Ernst Gombrich, there is a cycle of repose-disturbance-repose in works such as these and others such as Tremor (1962). The sway of apparent movement across the canvas is harmonic and the acoustic resonance of her work makes more sense when we appreciate Riley’s lifelong interest in Igor Stravinsky and his book Poetics of Music (1942). 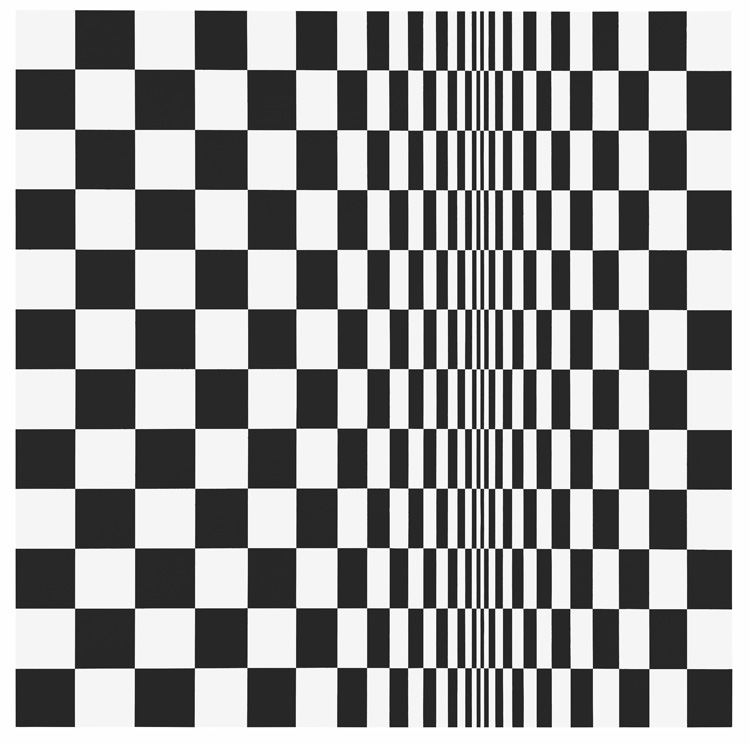 Looking at works such as Movement in Squares (1962), shapes appear to move across the canvas and disappear into infinite recess. This confounds our senses and the ground beneath us seems to shift. This is an experience that is repeated again and again in this exhibition as we wander among a wonderful collection of Riley’s black-and-white works. I particularly appreciated the inclusion of a collection of six screen prints on Plexiglas, rarely seen and a real pleasure to experience. 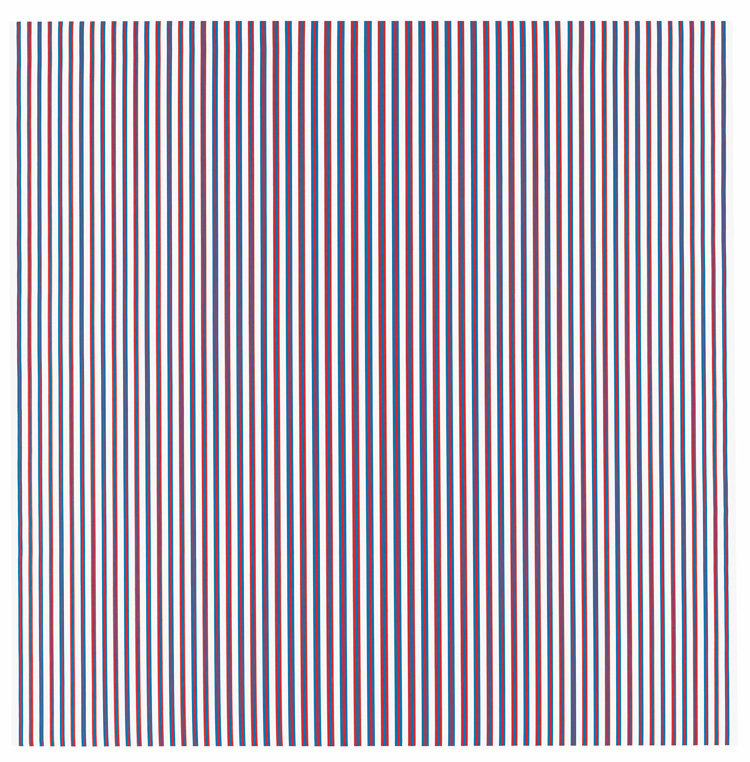 It was 1967 when Riley first introduced colour into her abstract paintings, but this was not straightforward. As she noted much later, in 2009: “At the core of colour is a paradox. It is simultaneously one thing and several things – you can never see colour by itself, it is always affected by other colours.” What Riley acknowledges in this statement is essentially the interaction of colour, the shimmer and the dazzle, something that is clearly demonstrated in her early stripe paintings such as Chant 2 (1967) and Late Morning (1967-8). Then, in the 80s, she developed her ideas further and the stripe was cut across with diagonals in Justinian (1988) and other works. 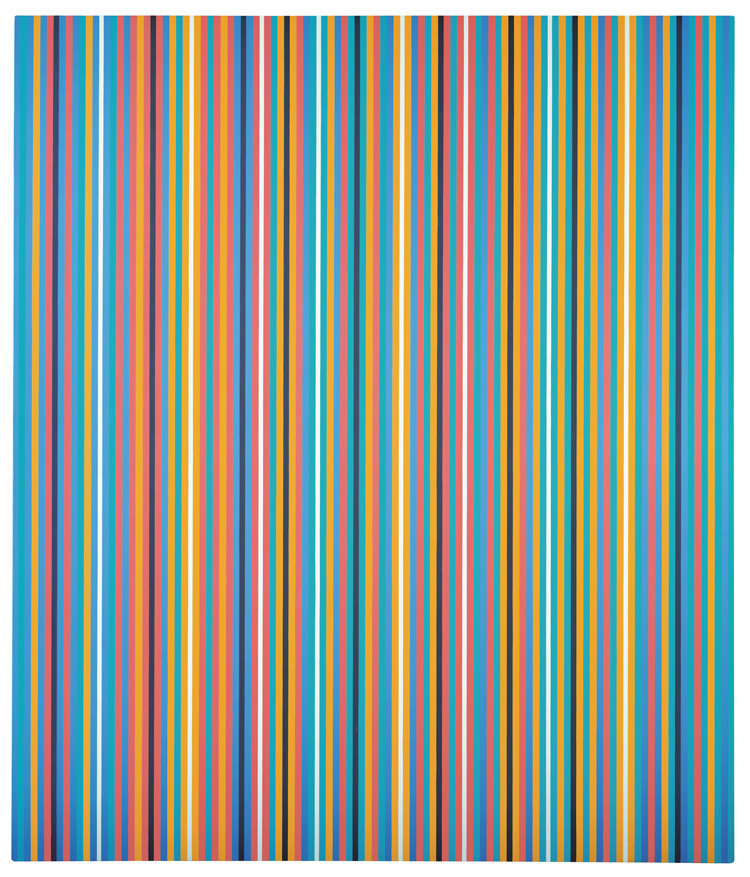 Movement in Riley’s work operates through her application of two strategies. First, there is the tonal movement, then there is the movement that results from the contraction and expansion of curves. The curve is a form that has sustained presence throughout Riley’s practice. We see the use of the curve in her early black-and-white paintings such as Kiss (1961), then in the deployment of tonal sequences in works such as Pause (1964). 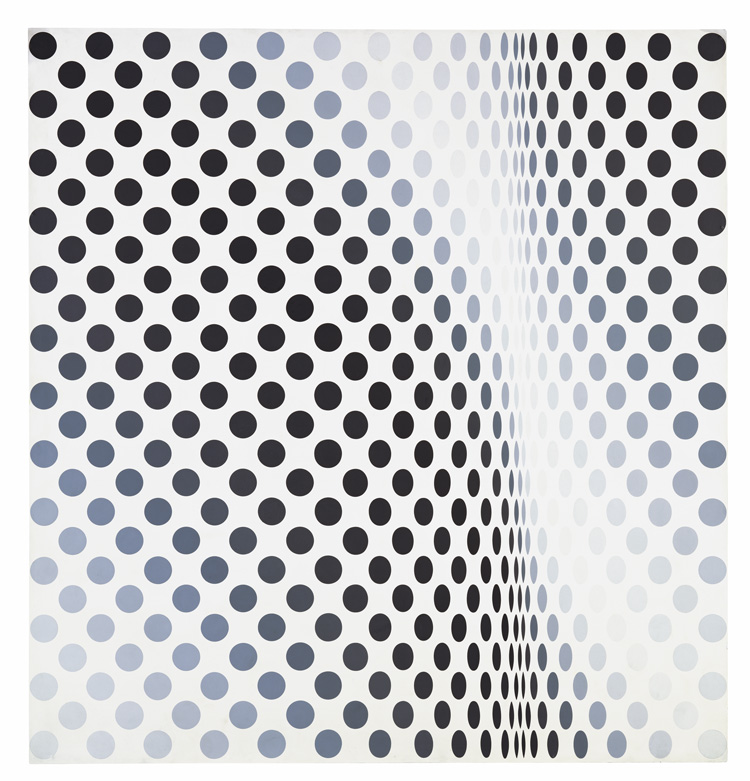 Once she introduced colour, the twists and turns of colourful curves rise and fall in works from Aubade (1975) through to Verticals 2 (2006) and many more besides. The swell, buckle and yield of curves are akin to the writhing of bodies and bodies at rest. With this, we are returned to Riley’s early training in life drawing.

The highlight of this exhibition for me is the extensive space given over to Riley’s working process, her method of discovery and making. Among the preparatory drawings, studies and cartoons, we begin to get to grips with Riley’s unique combination of rigour and intuition in her work. The structure within which she works is more obvious to the viewer than the freedom and surprise so central to her creative process. The marking out of the picture space, the rigorous testing of colour against colour and shape against shape belie what is at the heart of her practice: that is, the sudden and certain discovery of the right combination, of what she was unconsciously searching for all along. Earlier this year she observed: “The working process is one of discovery and it is worth remembering that the word discovery implies an uncovering of that which is hidden.” It is thanks to Riley’s generosity that in this exhibition we get to see that working process laid bare, to view some of its various stages, and make connections with completed artworks. To share in something of the artist’s process, as we do here, is surely one of the greatest privileges afforded to us as viewers. 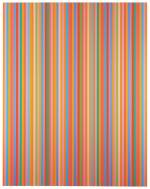 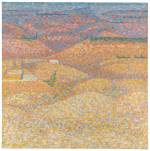 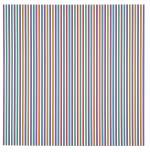