Michael Hearn has reviewed the 'Russia!' exhibition for us, but this article focuses on the exhibition catalogue.

In New York, the queues have been forming at the Guggenheim. This is a momentous exhibition, which follows smaller exhibitions in Paris, London, and long previously, in Washington DC. For many years, there seems to have been a great thirst on both sides of the Atlantic to understand the art of this great nation and culture in all its complexity. Therefore, the catalogue can only be said to be doing justice to this long-term swell of interest.

The exhibition has covered 900 years of Russian art, to varying degrees. This is backed by a sevenfold résumé of its historical development, divided in this publication into periods in the traditional mould. In the Introduction, James Billington refers to Nikolai Berdyaev's statement that creativity in Russia reflects here, 'A sort of immensity, vagueness, a predilection for the infinite such as is suggested by the great plain of Russia'. Can one generalisation thus made - that Russian artists were basically wanderers over the Russian land - 'be other than a romantic overview?' If it was so, pictorial art as the first form of expression, lifting the Eastern Slavs from primitive paganism into a distinct place in the mainstream of world culture had become reality via the adoption of Byzantine Christianity by Kievan Rus, in the late 10th and 11th centuries. The icon painters worked collectively in small groups, as in that led by Andrei Rublev. We are in the realm of mythology, of course, when connecting this with a meaningful art historical world order.

Another myth dealt with in the catalogue, but not fully plumbed, is the conventional assumption that Russian culture conveniently represents a series of obliterative explosions, each demolishing its predecessors along the way. This catalogue, fortunately, reveals this to be largely an artificial construct, worked out by a series of latter-day art historians, within an agreed agenda. However, an overall sense of cultural claustrophobia did persist, from the 11th century to the close of the 18th. So, inevitably, the construction and establishment of St Petersburg provided a massive release from the prevailing continuum of Russian culture of the time. This great window now thrown open upon Europe, and the world, deliberately drew in the influential high points of European culture, in figurative, topographical and ultimately landscape painting, providing new points of reference for the future. If Moscow had been the cramped archetype of an inward-growing Russia, St Petersburg made the transformation to a modern culture.

The Russian defeat of Napoleon, in 1812, produced a great surge of national pride, and as much a transformation as the British and Prussian defeat of Napoleon was for the rest of Europe, three years later. The timely freeing up by the liberal Tsar Alexander II of social hierarchies allowed a new realism to seep away the hidebound influences affecting art patronage. The defensive Russia that had developed in isolation is made clear here by Evgenia Petrova, as to have been a major obstacle to intellectual development: fundamentally there never could have been any contemporary Renaissance earlier. Instead, what Russia had with St Petersburg was the perfect creation of a Renaissance city, consciously modelled on the classical heritage of central Europe. Before this, there was no antiquity, no renaissance. Yet it happened nonetheless. Lacking a classical heritage, in the way Western European nations were able to absorb precedent, for Russia, European manners and morals were acquired by the Courts as effectively as the importation of a brand.

If one were to focus on one single genre in Russian painting that boasts a long engagement in Russian culture, drawing on the works included in the exhibition and in this publication, it is that strand of 'the great horizon', as repeated time and again in the long trajectory of Russian landscape painting. Of long inspiration to 19th-century Russian painters, both imported and indigenous artists, the horizon was a definitive expanse that could not be exceeded by any other national genre; whether in the work of Alexei Venetsianov (1820), or the winter spreads of Nikifor Krylov. In such landscapes, great and all-pervasive skies capture this majesty. Arkhip Kuindzhi's 'At Night' captures this brooding quality for the catalogue. But, as exhibition goers, we have been there before. In 1986, Donald McClelland of the Smithsonian 'Sites' organisation brought together a superb collection of such works, drawn from the State Tretyakov Gallery in Moscow, and from the State Russian Museum in Leningrad. In 1986, this exhibition, possibly the last cultural exchange with the former USSR, exceeded all expectations. These works were all from the period 1850-1910. The exhibition was appropriately titled: 'Russia, the Land, the People'. The selection of 'People' portraits or groups likewise captured the essence of 'being Russian'. Many have waited for this further fulfilment. The stillness of many of the landscapes, momentary as it seems, is balanced now by the faces selected, individuals aware of new cultures, yet unable to do other than show, momentarily, this silent, Russian quality.

More recently, in 2004, the exhibition, 'Russian Landscape in the Age of Tolstoy', came to the National Gallery in London, from Groninger, Holland. This, too, could be seen as a precursor to the exhibition and catalogue mounted this year at the Guggenheim. The great horizon is again prevalent. The Guggenheim catalogue also illustrates most relevantly the painting by Kasimir Malevich, 'Red Cavalry' (1918), where the horses gallop along the great horizon. The section and chapter on 'Socialist Realism at the Thaw' includes Alexander Deineka's famous painting, 'The Defence of Petrograd' (1927), which seems inappropriately placed in this section, and would perhaps have been better placed in the section entitled 'The Many Faces of the Russian Avant-Garde.' At least it bolsters up an otherwise predictably weak socialist-realist section.

In most respects, this is a masterly achievement, both as exhibition blockbuster, and as a catalogue of appropriate length, and both should provide art historians with new preoccupations for the next decade. This is a period when Russian art is still being redefined, new discoveries made, and obsolete mythologies displaced. The beneficiaries, apart from those who see the exhibition, are equally to the West as to the East. 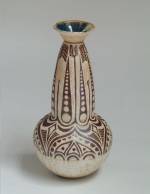