Book review: An Outline of European Architecture by Nikolaus Pevsner

An Outline of European Architecture

by Nikolaus Pevsner
Preface and Postscript: by Michael Forsyth
Revised edition published in the United Kingdom by Thames & Hudson Ltd

In this new and updated edition, the current publishers have produced a well-timed development of this classic work which first appeared in 1943 as a Pelican Paperback. The first line of the author’s Introduction was the famous, but now outdated statement: “a bicycle shed is a building; Lincoln Cathedral is a piece of architecture.” This sentence was virtually engraved on the minds of post-war architectural students, indeed it provided the basis for discussion of many an examination question. Pevsner was already well known, not least through his previous publication, Pioneers of Modern Design, which was reputedly enlightened by information culled from Pevsner’s colleague in the pre-war Architectural Review, Phillip Morton Shand. The ‘Outline’ itself speedily became a longstanding textbook on European Architecture. A major milestone along the route was the Allen Lane Jubilee Edition of 1960, lavishly illustrated in black-and-white plates and a legend in its time, with 610 photographs, plans and sections no less.

By contrast this new 2009 edition contains some 260 carefully selected colour illustrations together with a wider offering of plans and sections. The publication actually appears to have been contracted out to Palazzo Editions of Bath, whose team deserve major credit. Michael Forsyth has clearly been fully engaged, as also Director of Studies at the University of Bath. There is evidence of a useful synergy here. There is also clear evidence of the application of forensic scholarship: dates are marginally adjusted, as in the case of Filippo Brunelleschi’s Foundling Hospital – ‘begun in 1419’ (first edition) and corrected to 1421 here.

Moving fast forward to Forsyth’s new chapter on ‘The Modern Movement’, there is all the appropriate historical sweep of a broad church. Newly included is Ragnar Ostberg’s, Stockholm Town Hall, but not shown is Asplund’s City Library of 1921, a spatially more remarkable building. The Bauhaus, Dessau, by Walter Gropius is shown in more or less its contemporary state, which is useful. Giuseppe Terragni’s, Casa del Fascio (1932) at Como loses its illustration, but retains a mention, as does the Finnish master Alvar Aalto, but only just, with his MIT Baker Building at Cambridge Massachusetts, as Colin Rowe once said: “I never much liked it….” Yet he went on to applaud the Mount Angel Benedictine Library. Such transformative modernist-humanist works might merit a sure place, or else the Paimio Sanatorium (Turku 1933), or the Viipuri Library Viipuri (1934) which is now undergoing a celebrated restoration in Russia. More recently, Norman Foster’s ‘Gherkin’ in the City of London flashes up full page, as it seems it always will.

There are serious omissions – and less serious elisions. Michael Forsyth has faced an almost impossible editorial task over this final section. These aspects are mitigated largely by superb new colour images; Pevsner’s, American Postscript has been dropped, which seems hard to justify other than on grounds of length. But then, this is after all, An Outline of European Architecture, which says it all. 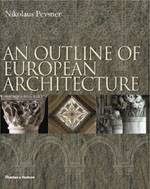