From Ryan Orme’s inventive form of urban landscape painting to Eleonora Agostini’s weird depictions of family life and Ben Yau’s deep-dive into the history of the 1973 military coup in Chile, here are some of the best from this year’s New Contemporaries 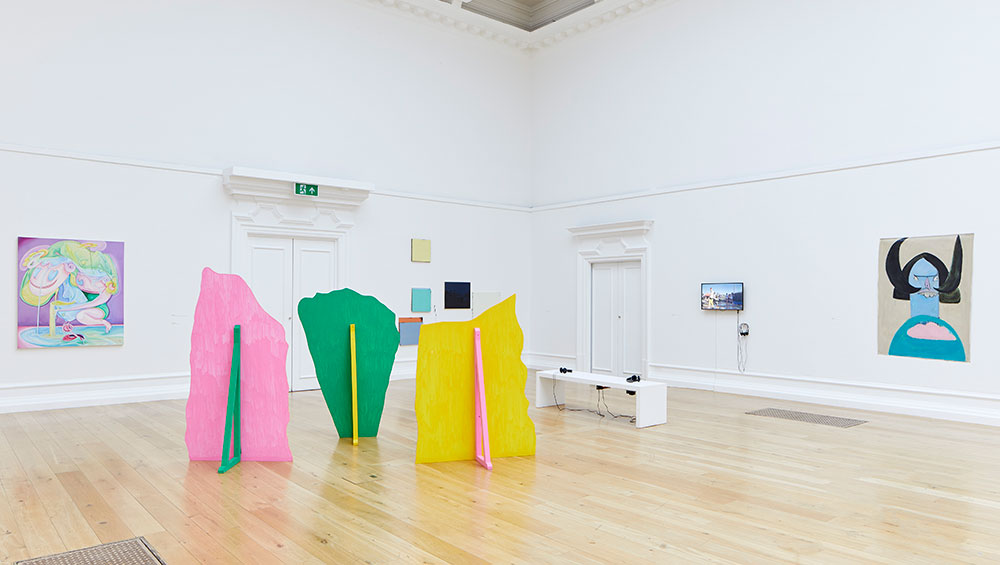 New Contemporaries is always worth a look, and this year’s crop does not disappoint. For the second year running, the annual, 70-year-old open submission exhibition for students and recent graduates of British academic institutions launched at South London Gallery. (The show travels to Leeds Art Gallery in September.) Contributions range from the political and the comic to the downright bizarre. Wander through the gallery’s two sites and you will find – among other things – a painting of Boris Johnson in a tumble dryer, archival revelations of CIA meddling in global politics, and a video in which a naked, grey-haired man zipped inside a see-through plastic bag describes the fashion world as “a pile of shit”. This year, 45 artists were selected from more than 1,500 applicants by a panel of New Contemporary alumni: Rana Begum, an artist known for her minimalist colour fields; Sonia Boyce, painter, performer and heavyweight of contemporary British art; and the experimental film-maker Ben Rivers. Here is my pick of ones to watch.

Ben Yau, The Spectre of A World Which Could Be Free, 2019. Image courtesy the artist and New Contemporaries.

Ben Yau
Ben Yau’s framed collage, The Spectre of a World Which Could Be Free (2019), takes an archival deep-dive into the history of the 1973 military coup in Chile. With the aid of the CIA, the country’s military wrested power from Salvador Allende, the first Marxist to be democratically elected in a liberal society. In his place, Augusto Pinochet was installed, overseeing decades of brutality, persecuting political opposition and banning trade unions. Refusing to surrender or resign, Allende apparently took his own life with an AK47 given to him by Fidel Castro. Yau, who graduated from the University of the Arts in 2019, brings together a declassified US government document from 17 September 1970 outlining President Nixon’s opposition to the existence of an elected communist, along with a newspaper clipping from the New York Times detailing the election result, and a photograph of Allende speaking with the press. “The president asked the agency to prevent Allende from coming to power or to unseat him,” states the declassified letter, in which Nixon also authorises the use of US$10m for this purpose. Yau’s collage is a reminder, should anyone need it, of just how far the US is willing to go to maintain its grip on the economic world order – and the readiness of so-called liberal democracies to determine the fates of other nations if it suits their own agendas. 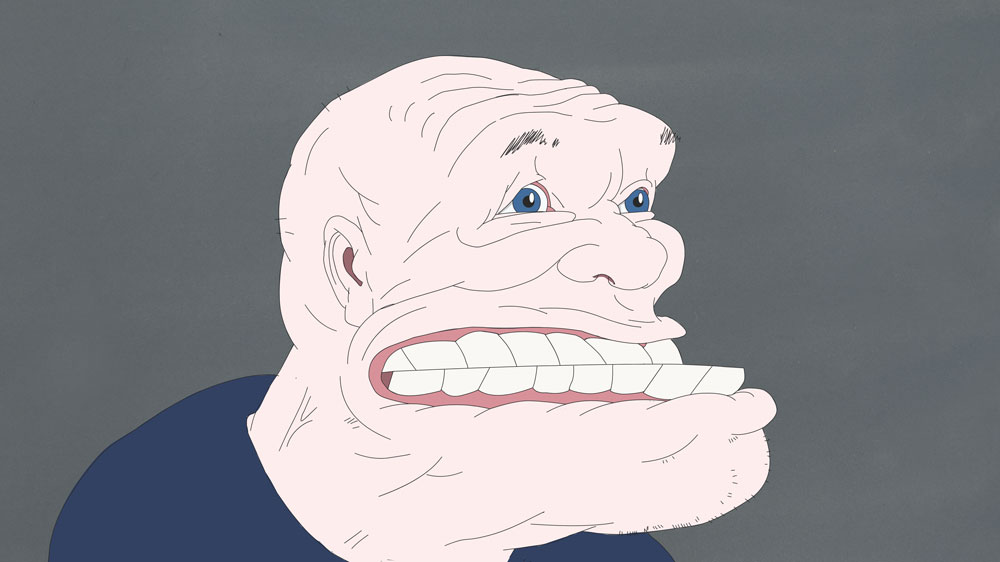 Taylor Jack Smith
The prize for the most painful-to-watch artwork on display surely goes to Taylor Jack Smith, a graduate of Slade School of Fine Art who hails from Southend-on-Sea. I watched Smith’s looped animation, Dentin (2018), through the cracks between my fingers. In the film a bald, white, wrinkled man mindlessly grinds a grotesquely oversized set of teeth back and forth, accompanied by a brutal soundtrack that suggests permanent bodily damage. (Think nails running down a black-board, times that feeling by 100, and you are halfway there.) The work’s combination of humour and visceral horror reminds me of the whacky brutality of cult US 1990s cartoon The Ren & Stimpy Show – and of US artist Jordan Wolfson, whose nihilistic animations dominated the art world over the past decade. Yet for all Dentin’s wanton grossness, and the contextual company it keeps, by zeroing in on a single gesture and repeating it ad infinitum, Smith somehow manages to pull off a kind of minimalism. Quite the feat. 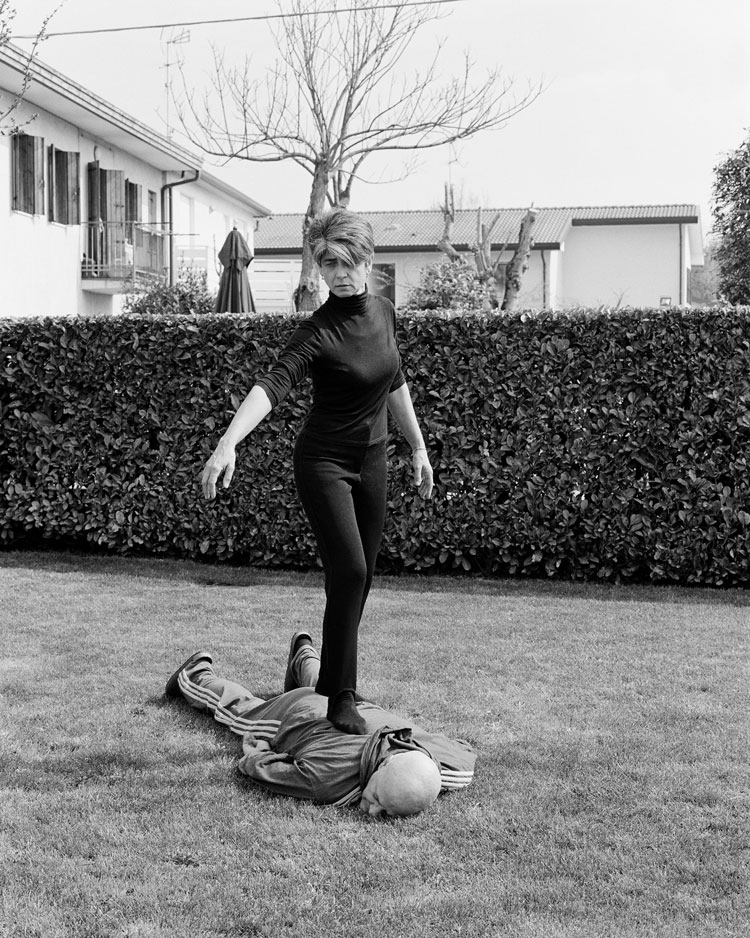 Eleonora Agostini
Royal College of Art graduate Eleonora Agostini’s photographs are rich with narrative and uncanny humour. On show are two framed black-and-white images of family life. In Wednesdays IV (2018) – acquired by the Government Art Collection – a woman dressed in black stands on the back of a man in a tracksuit who is lying face down on a well-kept lawn. It is not clear whether she is giving him some kind of massage or playing a sadistic game. The image speaks of the strangeness of domesticity, and calls to mind Yorgos Lanthimos’s darkly comic feature film Dogtooth (2009), set among a family cut off from the world and governed by a perverse mythology established by the father. Every family is a cult, Agostini’s images seem to say, and the rituals we consider normal are usually anything but.

Isobel Napier
A former sculpture student at the Slade School of Fine Art, Isobel Napier presents a single work: Paper Piece 1 (2018), a laser-cut piece of newsprint that hangs from the ceiling. Napier has manipulated the paper in such a way that it echoes traditional weaving. Squint and it could be a rug or shawl. The effect is both beautiful and haunting. This strange, digitally designed, machine-made object is a ghost of handmade craft – it speaks to the promise of technology and the potential obsolescence of historical practices. Looking at the work, suspended somewhere between digital and haptic realms, I wonder whether in years to come our museums will be filled with such things: neat, spectral forms that approximate a lost cultural past.

Ryan Orme
As in recent years, many of the painters selected for exhibit seem to be working under the influence of Rose Wylie, or else channelling the surreal, cartoonesque language popularised by Sanya Kantarovsky and Ella Kruglyanskaya. Ryan Orme, however, takes a different path. Orme graduated with an MFA in sculpture from the Slade School of Fine Art in 2019. His painting-sculpture hybrid Stokie Common (2018) is made up of two steel panels screwed to the wall, in the middle of which a small painting of an inner-city London park in twilight is balanced on a tiny shelf. The panels are painted yellow and covered in a dirty wash. From a distance, they appear as if immersed in a cloud of smog. The small painting depicts a park fence and a table-tennis table flanked by trees, all picked out in shades of turquoise. From Orme’s use of steel and household paint, to the choice of a small patch of London grass for a subject, this is an ambient, thoughtful and inventive form of urban landscape painting.